A waterphone is a type of atonal acoustic musical instrument consisting of a stainless steel resonator bowl or pan with a cylindrical neck and bronze rods of different lengths and diameters around the rim of the bowl. The resonator may contain a small amount of water giving the waterphone a vibrant ethereal sound that has appeared in movie soundtracks, record albums, and live performances.


The instrument was invented and developed by Richard Waters.
Several sizes and design variants of the instrument exist. It is generally played in a seated position by a soloist and either bowed or drummed with movements to affect the water inside. This creates the resonant characteristics of the bowl and rods in combination with the movement of the water. The sound of the waterphone is often used to evoke mystery and suspense. A superball mallet has become the prime way of playing the waterphone in a friction mode.

The waterphone is a modern invention related to the Tibetan water drum, a round, slightly flattened, bronze, drum with an aperture in the center top. According to the inventor of the waterphone, Richard A. Waters, the waterphone in part relates to this design as well as the nail violin, which also used a resonator and rods (nails), and is struck or bowed.

The waterphone has been exhibited in museums and galleries and is the subject of several short documentaries in movie and TV and over recent decades the waterphone has become popular with symphonies, touring bands, and recording studios. Contemporary classical composers who have written parts for waterphone in compositions include Sofia Gubaidulina, Jerry Goldsmith, John Mackey, Tan Dun, Christopher Rouse, Colin Matthews, Carson Cooman, Andi Spicer, Andrew Carter, Bernie Krause of Beaver & Krause and Todd Barton.


It has also been used prominently by rock musicians Richard Barone and Alex Wong (when playing with Vienna Teng) and can be heard in music by The Harmonica Pocket. Canadian musician/composer, Robert Minden, has been composing for his collection of 5 vintage waterphones on many recordings since the mid-1980s. His Ensemble "The Robert Minden Ensemble [now Minden Duo]" formed with daughters Andrea and Dewi Minden and colleagues Carla Hallett and Nancy Walker in 1986, features the waterphone as a central instrument within their 'found object' orchestra. The waterphone is used to great effect in Howard Goodall's "The Dreaming", a musical commissioned by The National Youth Music Theatre of Great Britain, based on Shakespeare's "A Midsummer Night's Dream". Goodall uses its ethereal sounds to evoke the mystery of the woods. Tom Waits is a waterphone collector and player as is Micky Harte.


The waterphone has been featured in the soundtracks to many movies, including Let the Right One In (2008), The Matrix, Star Trek: The Motion Picture, music by Jerry Goldsmith, Dark Water, and Crouching Tiger, Hidden Dragon, ALIENS, The Spirit, Female Perversion as well as TV production 24. Tan Dun's opera The First Emperor (2006) & "Water Music" feature the waterphone. A sound sample can be found at The Freesound Project. and many more. There is a yearly "Waterphone Music Competition" sponsored by Richard Waters. 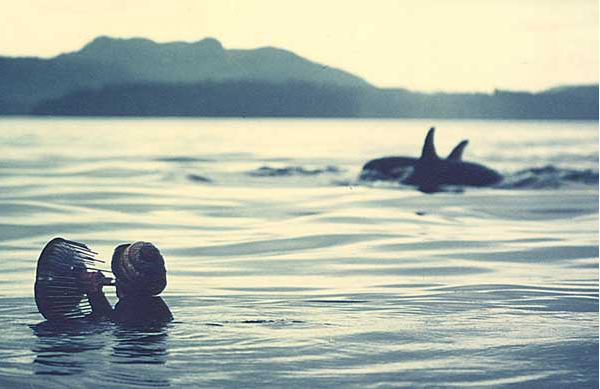 As the waterphone may be taken into the water, on several occasions the waterphone has been used successfully to call whales and other cetaceans, especially by Jim Nollman of Interspecies Communication. The true story of such interspecies communication was the basis of the stage show and album "The Boy Who Wanted To Talk To Whales" by The Robert Minden Ensemble in 1989.

Waterphones have been exhibited in museums and galleries and utilized by music/performance groups and symphonies such as the "New York Philharmonic" and others worldwide. The Renwick Gallery (The Smithsonian Institute), The Oakland Museum, The Walter Anderson Museum of Art, L.A.I.C.A., the San Francisco Folk Art Museum and the Exploratorium are a few of the art spaces to exhibit them. They have been the subject of several documentaries including "Art Notes", aired on public television in San Francisco and a movie short, "Celestial Wave" as well as numerous videos on YouTube.