Oz Noy is a guitar player from Israel who started his professional career at the age of 13 playing jazz, blues, pop, and rock music. At age 16 he was already playing with leading Israeli musicians and performers, and at age 24 he was one of the most established studio guitar players in the country, playing on numerous records. Since his arrival to New York in 1996, he has made a big impact on the local music scene with his unique sound, compositions and style.

1. Which was the first record you bought with your own money?
Probably some popular Israeli singer or band.

2. Which was the last record you bought with your own money?
Daniel Lanois — Here Is What Is.

3. What was the first solo you learned from a record — and can you still play it?
I don’t remember the first one, but I remember trying to transcribe George Benson’s solo on “Take Five” — with no success.

4. Which recording of your own (or as a sideman) are you most proud of, and why?
My next record. (I hope?!)

5. What's the difference between playing live and playing in a studio?
Much easier to play live, ’cause you’re used to the sound of your amps. It’s really hard to get your amp tone to feel and sound the same in the studio. You need to adjust to whatever comes out of the monitors or headphones. It’s a nightmare, usually.

6. What's the difference between a good gig and a bad gig?
If I feel like I’m getting sleepy, then that’s a bad gig. If the groove is not happening, it’s a bad gig.

7. What's the difference between a good guitar and a bad guitar?
Sound and feel.

8. You play electric and acoustic. Do you approach the two differently?
No.

9. Do you sound more like yourself on acoustic or electric?
Electric.

10. Do you sound like yourself on other people's guitars?
Yes.

11. Which living artist would you like to collaborate with, and why?
Herbie Hancock, Chick Corea, Wayne Shorter, Daniel Lanois, Sting, Brian Adams, Sherly Crow….

12. Which dead artist (music, or other arts) would you like to have collaborated with, and why?
Miles Davis, Michael Brecker

13. What's your latest project about?
Another record of my own — original music of mine. 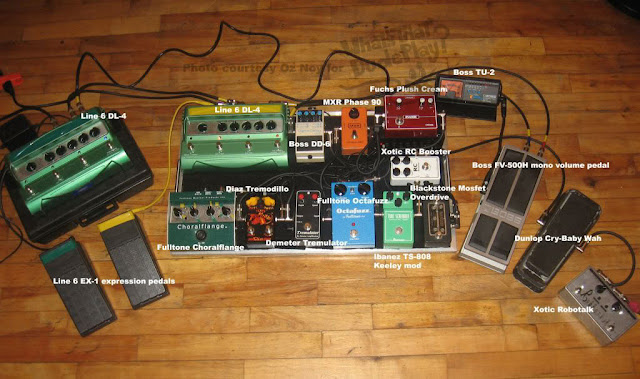