David Sylvester You always say that these narrow proportions, which you find too narrow, are involuntary. But you arrive at these results in your work. You say that you do not want these results, but you reduce to these proportions.

Alberto Giacometti During a certain period, I wanted to hold on to volume, and the proportions became so small that they disappeared. Then I wanted to hold on to a certain height, and the proportions became narrow. It all happened in spite of me, even when I fought against it. And I fought against it, I tried to make them broad. The more I wanted to make them broad, the narrower they became. But I don't know what the real explanation is. I still don't know. I will only know by doing the work I am going to do. But up till now, all I can say is that a head with proportions that are not the real ones seems more alive than a head with proportions that seem more real. And this has been giving me a lot of trouble...
DS I've heard you say, for example, while you were working on a standing figure: the more you take away, the fatter it becomes. Do you know why this happens?
AG What I know, more than ever, is that the more I take away, the fatter it becomes. But why, I don't know yet. With the bust I'm doing now, I do nothing but take away, and it's so fat that I feel it must be twice as thick as it is. So, I've got to take away, take away, take away... And that's where I really get lost. As if the material itself had become an illusion. You have a certain amount of clay, and at first you feel that you've given more or less the right volume. And then, to make it more real, you take away. You don't do anything but take away. It becomes fatter and fatter. But then, it's like the material itself, you could stretch it to infinity. If you work a little clump of clay, it seems to get bigger. The more you work it, the bigger it gets.

AG That's probably part of it, anyway, but there's also something else. If I copy the surface of a head exactly in a sculpture, what's inside? Nothing but a great mass of dead clay. In the living head, the inside is just as organic as the surface, right? So, a head that seems real, say a head by Houdon, is like a bridge, a bridge with a surface that resembles a head; but you have the feeling that the inside is empty if it's made out of clay. If it's made out of stone, you feel that it's a mass of stone. And already, there's something false, whether it's empty or a mass of stone, because there's no resemblance, because in your skull there's not a millimetre that's not organic. 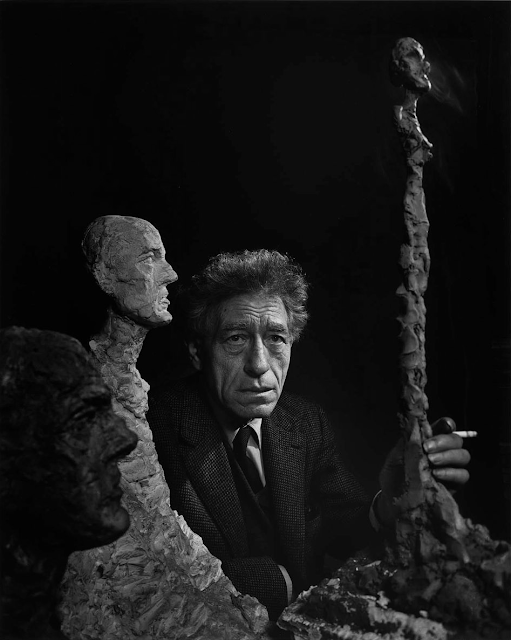 So, in a sense, in the narrow heads there's just enough clay for them to stand up and nothing more. The inside is something absolutely necessary. Necessarily, there's more resemblance with a living head than one that's just a copy of the exterior. And I think this is the reason why it might be possible to do a painting that resembles a head and less possible, or not possible, to do a sculpture. 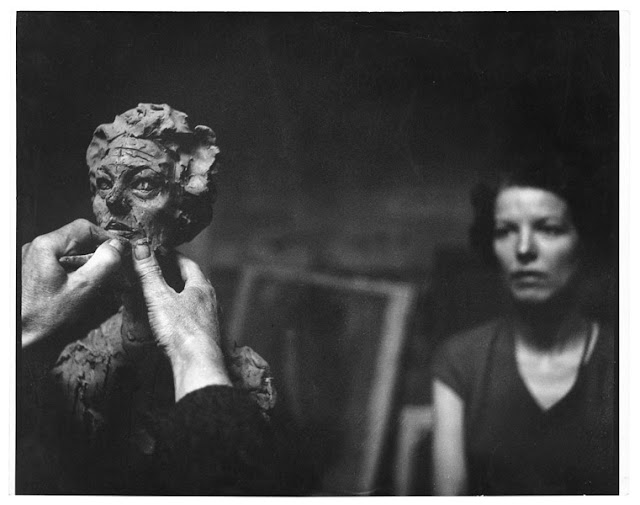 
This afternoon at the British Museum, looking at the Greeks, I found nothing but enormous rocks, enormous dead rocks. When I look at a person looking at them, the person who looks doesn't have any thickness, he's almost transparent. And very light. You can see that the weight of the mass is false. When someone is alive, even if he's very fat, he holds himself very lightly. So, if I make life-sized figures that become very thin, there must be a motive: one reason is that, for them to be true, they have to be light enough for me to take them with one hand and put them in a taxi beside me. 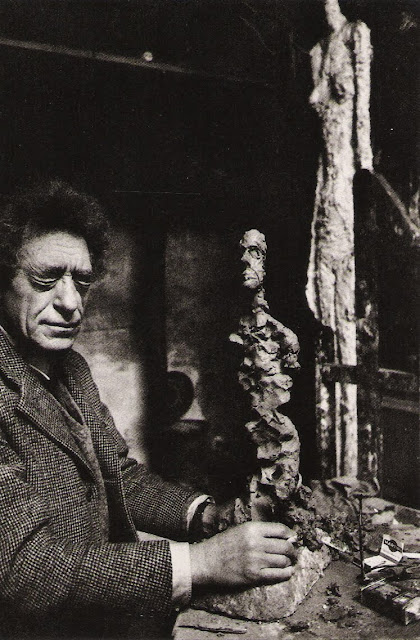 DS And the problem is even more difficult when one paints sculptures from nature because, on the surface, you have a very exact illusion and, on the inside, there's nothing but bronze, clay, whatever; so in this sense it's even more false.

AG Yes and no. For example, a sculpture seems narrow when it's not painted; painted, it seems almost as we see it. I don't know what would happen if I made it wider first and then painted it. In order to paint it, it's possible that the volume has to be more reduced than what you thought it should be. Because a light colour dilates, it dilates the volume (that's what you see on canvas, don't you think?). So probably, in order to be painted, the sculpture has to be narrower than you thought at first. 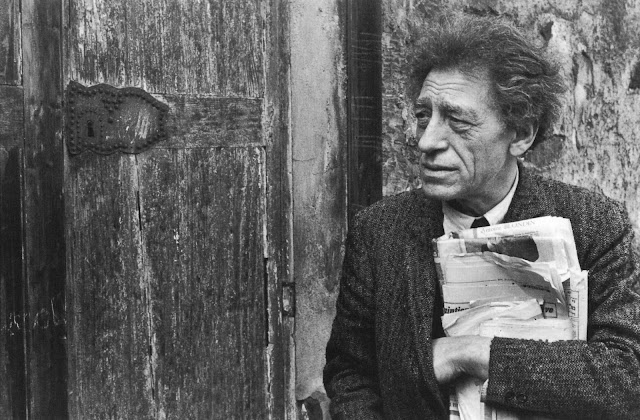 What I know is that I've really never been able to do an eye as I see it. I've never succeeded in sculpture, not in painting either, but even less in sculpture, because if you look at an eye straight on, it doesn't seem to bulge very much. If you look at it from the side, it seems almost sharp, doesn't it? So, it's two contradictory things: in reality it's quite wide and pointed at the same time. How can you do something that's round and pointed at the same time?


You would think that if you looked at it straight on in a good light that you would be able to do the curve of the eye, to model it as you saw it; but to me that seems just about the most impossible thing in the world. Not only impossible for me, but for everyone, everywhere, always. The only eyes that impress me at all are from the sculptures of the so-called "high style". Especially Egyptian sculpture, and the Byzantines, too. 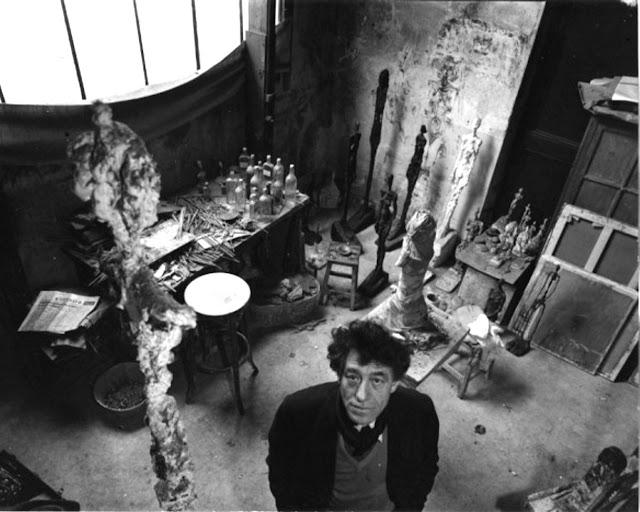 AG A little after I started to do sculpture, I painted some of them, and then I destroyed them all. I've begun again several times. In 1951, I painted a whole series of sculptures. But in painting them, you see what the form lacks. And it's useless to paint over something that you don't believe in. I tried again a month ago. In painting them, the deficiencies of form came through. 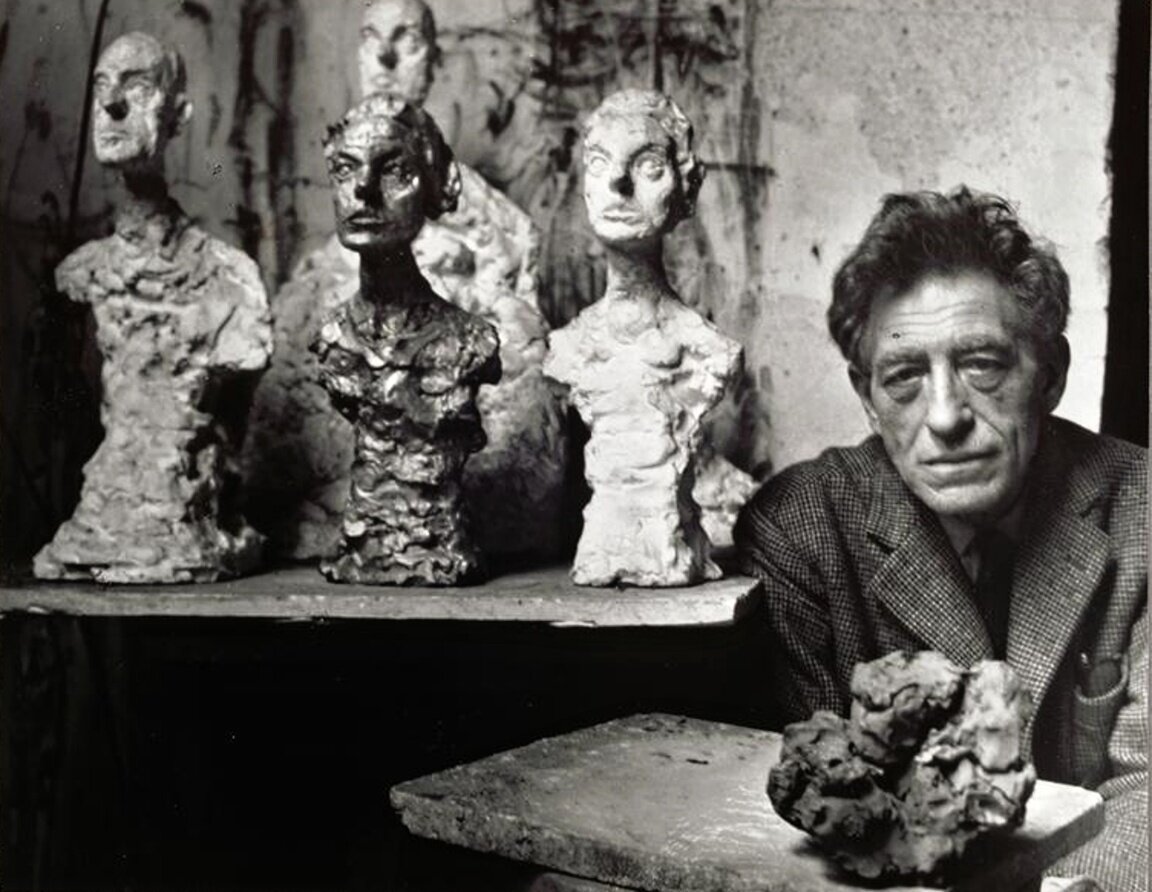 Up till a year ago I thought it was much easier to draw a tablecloth on a round table and totally impossible to draw it as I saw it. The important thing is to let go of the tablecloth until you've understood it a little better, as much as you can, even if you can't. You've got to sacrifice painting, sculpture, heads and everything else, and limit yourself to staying in a room, in front of the same table, the same cloth, the same chair and do nothing but that.

And I know in advance that the harder I try, the more difficult it becomes. Bit by bit my life is reduced to almost nothing. It's pretty upsetting to do this because you don't want to sacrifice everything. However, it's the only thing to do. Perhaps, I don't know. 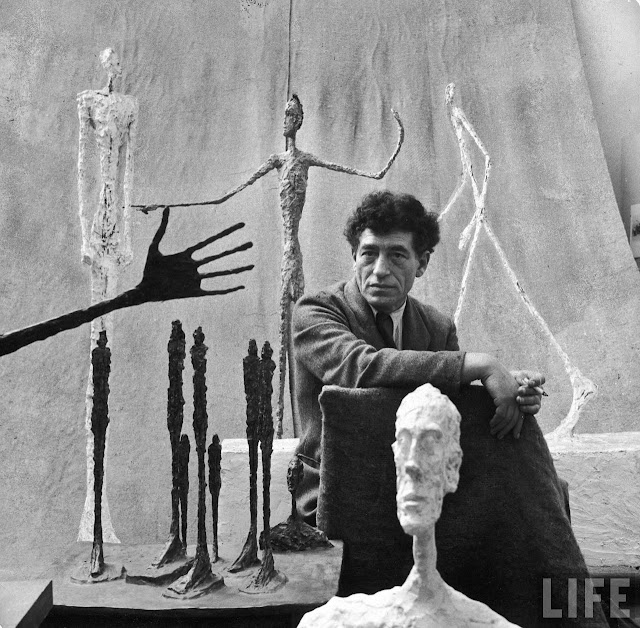 But in any case, once I've become more sensitive to the foot-and-a-half distance between a table and chair, a room, any room, becomes infinitely larger than before. It becomes large enough for me to live in it. Little by little, it does away with all my walks. 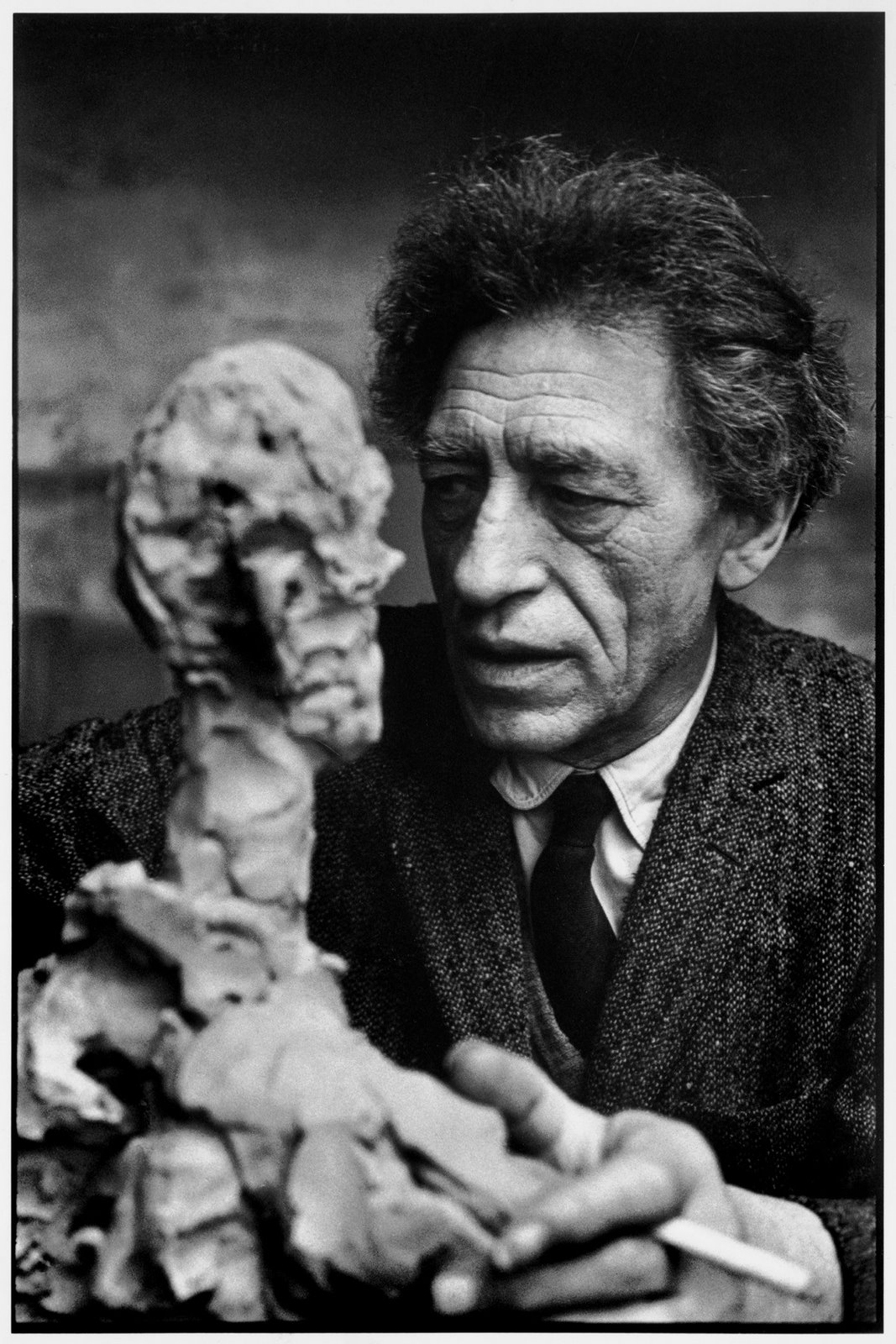 That's why I don't walk any more. The walks I take are for going to a restaurant, a cafe, to go somewhere I have to go, and I'd rather go by car than on foot: it's no longer for the pleasure of taking a walk. The pleasure of taking a walk in the forest has disappeared for me because the first tree on a sidewalk in Paris is already enough. That's enough for me in the way of trees; to see two of them would make me afraid. I used to want to go on trips, but the problem now of going or not going leaves me completely cold. The curiosity to see something is reduced, because a glass on a table astonishes me much more than before.

If the glass there in front of me astonishes me more than all the glasses I've seen in paintings, and if I think that even the greatest marvel of architecture couldn't impress me more than this glass, there's really no need for me to go all the way to India to see this or that temple, when I have so many of them in front of me. But if this glass becomes the marvel of marvels, all the glasses on earth become marvels of marvels, too. And other objects, too. So, in limiting yourself to a single glass, you have a much better notion of all the other objects than if you had wanted to do everything. 
In having a quarter of an inch of something, you have a better chance of holding on to a certain feeling of the universe than if you had pretended to be doing the whole sky. Against that, simply trying to draw a glass as you see it seems like a fairly modest undertaking. But because you know that even that is almost impossible, you can't say whether it's modesty or pride. So everything turns around in circles. 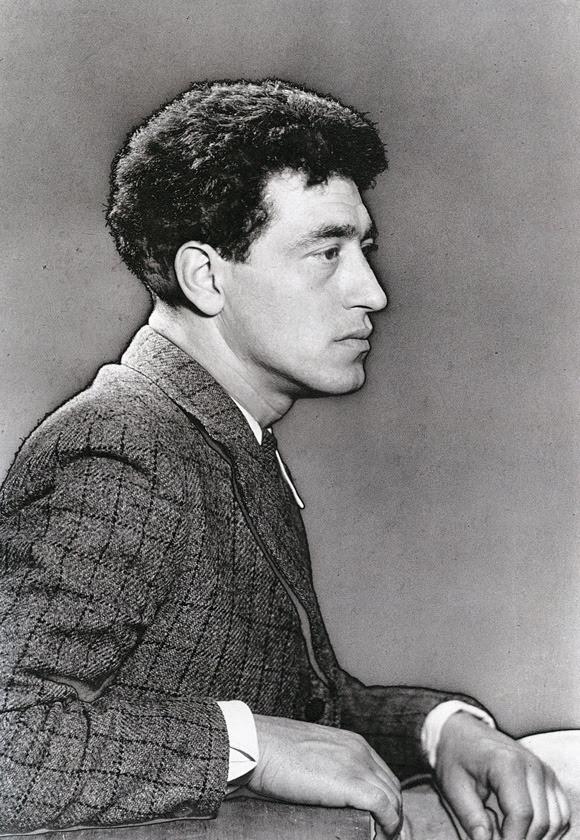