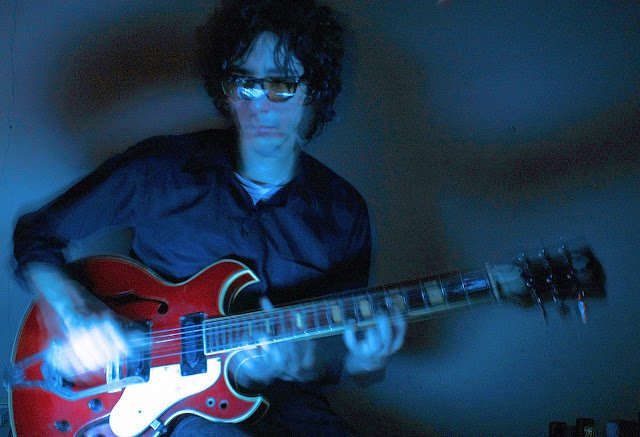 Luis Samanamud is a guitarrist-visual artist from Lima, Perú. He is been recording his music (instrumental landscapes and figures of sound) under the name of Santos Matta since 2012. His two official releases are Simulismo (2015) (with the collaboration of Kamila Lunae on vocals and noises and Carlos Acevedo on guitar) and Marchant Du Cel (2016), both recorded and produced by Samanamud. With Lunae and Acevedo he presented a perfomance on 2015: La Venganza de los Animales live on Fundación Telefónica. His visual work can be seen on Das Vulture 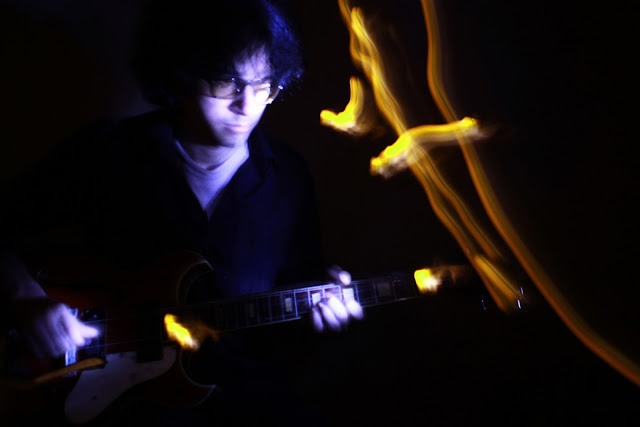 Making tapes very early on, when I had my first electric guitar. I accidently discover that I could get an stereo image by recording one channel at the time(right or left). When I listened to the whole thing I find out this overlapping of guitars quite enthralling. Later on I did a few loops and later with an PC I did all sorts of manipulations to sounds and guitar parts, all this without having an idea about concrete or tape music yet. It felt very natural to try it all. Still does.

I write poetry and also paint. These two disciplines are in close relation to the music I made, mainly painting. I find myself thinking a lot about painting when i play. Not necessarily about colors, more like the depth of field and motion of figures. I think about freely traces of drawing and feriously painted areas with shades and textures.

These lines by José María Eguren had been on my mind for weeks:

In the shadows/the triangles laughs.


It paints a very vivid image to me. I can see it, but also i can hear it.

I also being thinking about Kandinsky and his book The Point and the Line. His paintings; White Sharpness, Several Circles and Lines of Signs could be seen as beautiful graphic music notation as well as works of art.

Technique, to me, comes through constant playing and a certain degree of influence.

My main interest are about making the electric guitar a source of sounds not expected to be from an string instrument, so everything is permited.

I find great inspiration from the working process of Stockhausen (both his detailed compositions and the intuitive music of Aus den sieben Tagen), the electric period of Miles Davis (Pete Cosey and the cut-ups) and the playing of Derek Bailey and Masayuki Takayanagi. I'm very interested in those techniques and find myself thinking about them a great deal.

I think the main reason because one listen to music is to not feel alone, and I'm not the exception.

But the reason I make is a different one. It comes from the fascination I have with the guitar itself, the electricity, the feedback, the feel of it and the intensity and volume.

Everything its music. We cannot live without music because it doesn't depend from us.

To make a record on the amazon jungle, all the animals, birds and insects singing and screaming, with thousand contact mics all around and big amplifiers hanging from trees making loops and feedback. Someday.

How it genuinely moves me. I never try to interpret anything, its all about the heart.

I would like play with Kaiji Haino and Fred Frith. And Scott Walker.

Wall of sound. Big, huge, very spacious pictures. I'm thinking in Rothko and Kiefer. Lots of things going on, but all coming at the same time from my guitar.

Through rhythm and intensity, i want to create sounds with colors and shadows, an image that is always changing from one place to another, moving inside the head, the images crawls about, twirls and fall into the floor, it rings like bells, it pull strings violently, flowing constantly. Guitar parts that become characters. Drama within music.

In the processes of making it I don't hesitate a bit to let go a guitar part that I know is not right, and in the final stages of mixing I'm extremely critical about every single sound thats comes out of the speakers.

The best feeling is when I don't recognize it as mine and I say to myself 'what is this? who is playing?' and then I find its something I did a months ago.

My main guitar is an old red Silvertone with hollow body. The tuning, as well as the strings position, tend to vary from time to time. It forces me to play rather differently, making useless all the previous knowledge I had about how to play a guitar.

The use of the piezo mic to the hollow body alows me to capture little hits and scratches made on the surface. In occasions i play with a bow, screws, chains and aluminium foil.

I play into a mixer instead of an amp, so i can get more channels for my guitar.

The vibrance on the fingertips, the different degrees of tension, that feeling that one of them might brake at any moment, putting clips, bits of strings between them and the casual cutting. Even more if its an electric guitar, in that case the strings become so sensible thats feels really like its has a live of their own.

I want to integrate ideas of theater into live music settings, so I'm planning to do a perfomance. I've just finished with the writing of it; its has three parts and it will require two characters. The music its gonna be more sparse and its gonna require some live percussion.

At the moment I'm recording some new pieces, some using just feedback. 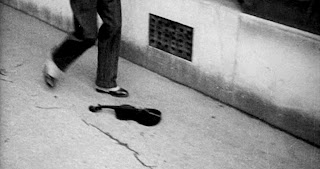 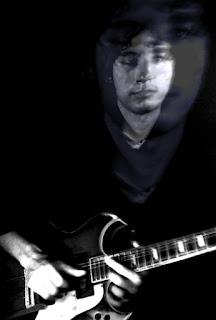