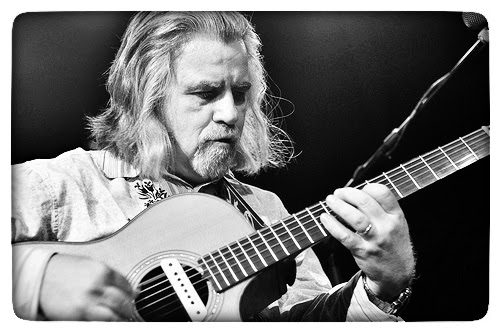 Born in Winston-Salem, North Carolina, Tim Sparks started picking out tunes by ear on an old Stella flat top during a bout of encephalitis that kept him out of school for a year. He taught himself to play the music he heard around him: traditional country blues and the gospel his grandmother played on piano in a small church in the Blue Ridge Mountains. 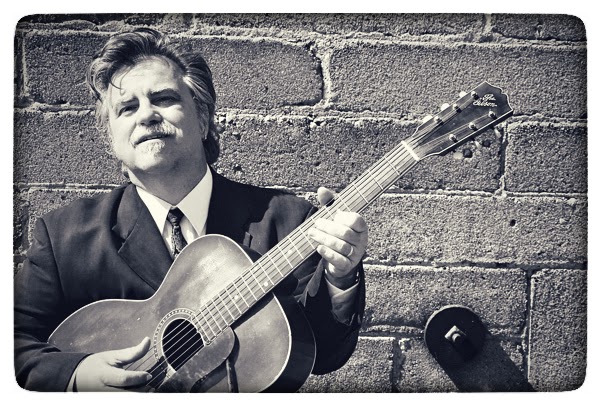 At age 14, Tim was nominated by a musically astute uncle for a scholarship at the prestigious North Carolina School of the Arts. There he studied the classics with Segovia protege Jesus Silva while continuing to play all kinds of music, increasingly turning to classic jazz for inspiration. He adapted compositions by Jelly Roll Morton, Scott Joplin, and Fats Waller to the guitar, frequently reducing piano arrangements to their essence. Early influences were Doc Watson, Arthur Smith, and most importantly Duck Baker, who opened up a horizon of possibilities for fingerstyle guitar. 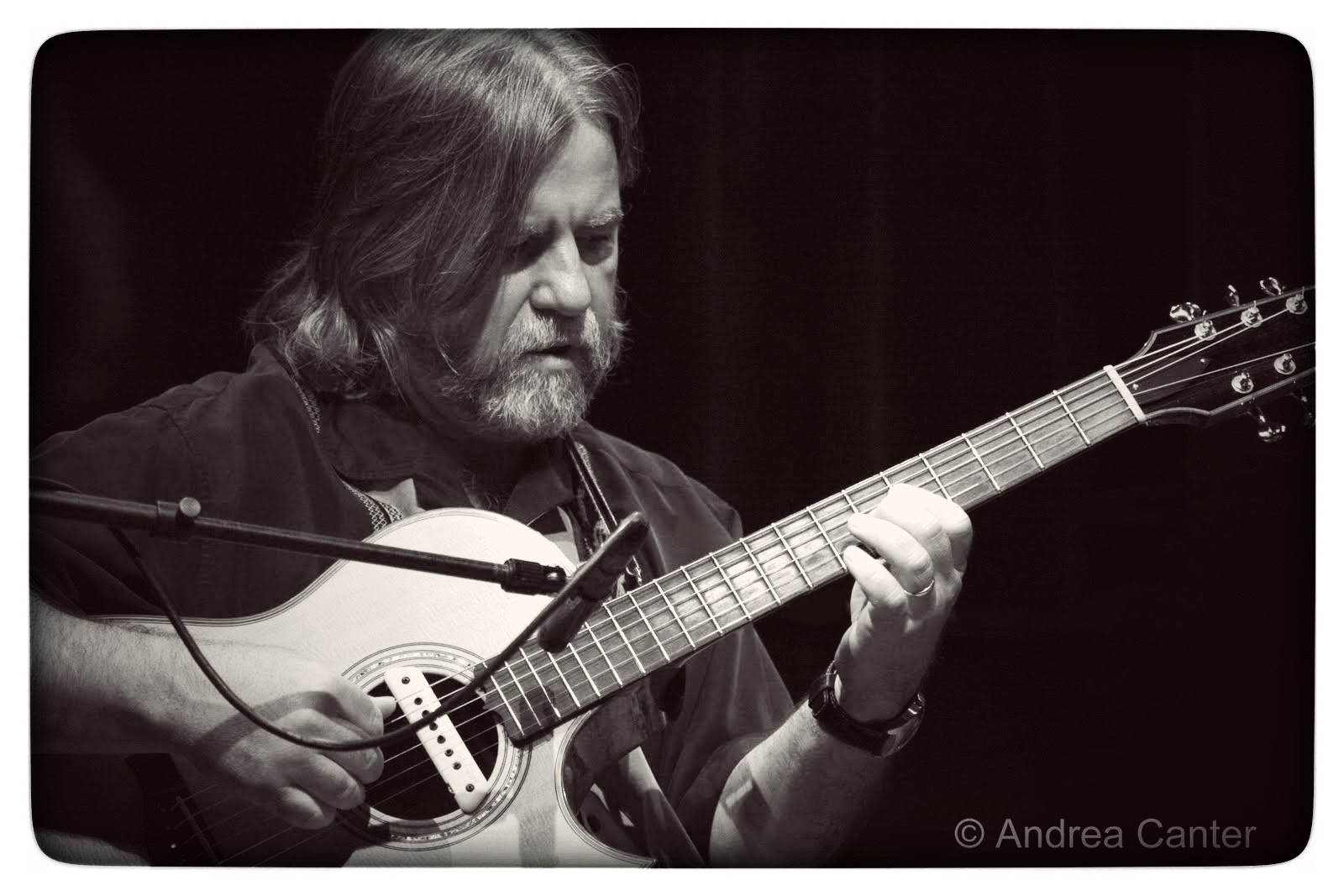 After a stint on the road with a Chicago-based rhythm and blues band, Sparks arrived in Minnesota where he soon established himself as a journeyman guitarist and session player. While recording three albums with the seminal vocal jazz ensemble Rio Nido, Sparks also became proficient in jazz styles from Brazilian to Be Bop. It was at this time he arranged Carla Bley's composition Jesus Maria for Leo Kottke. Rio Nido's first two vinyl recordings have recently been re-issued on CD on the Japanese Vivid Sound Label. 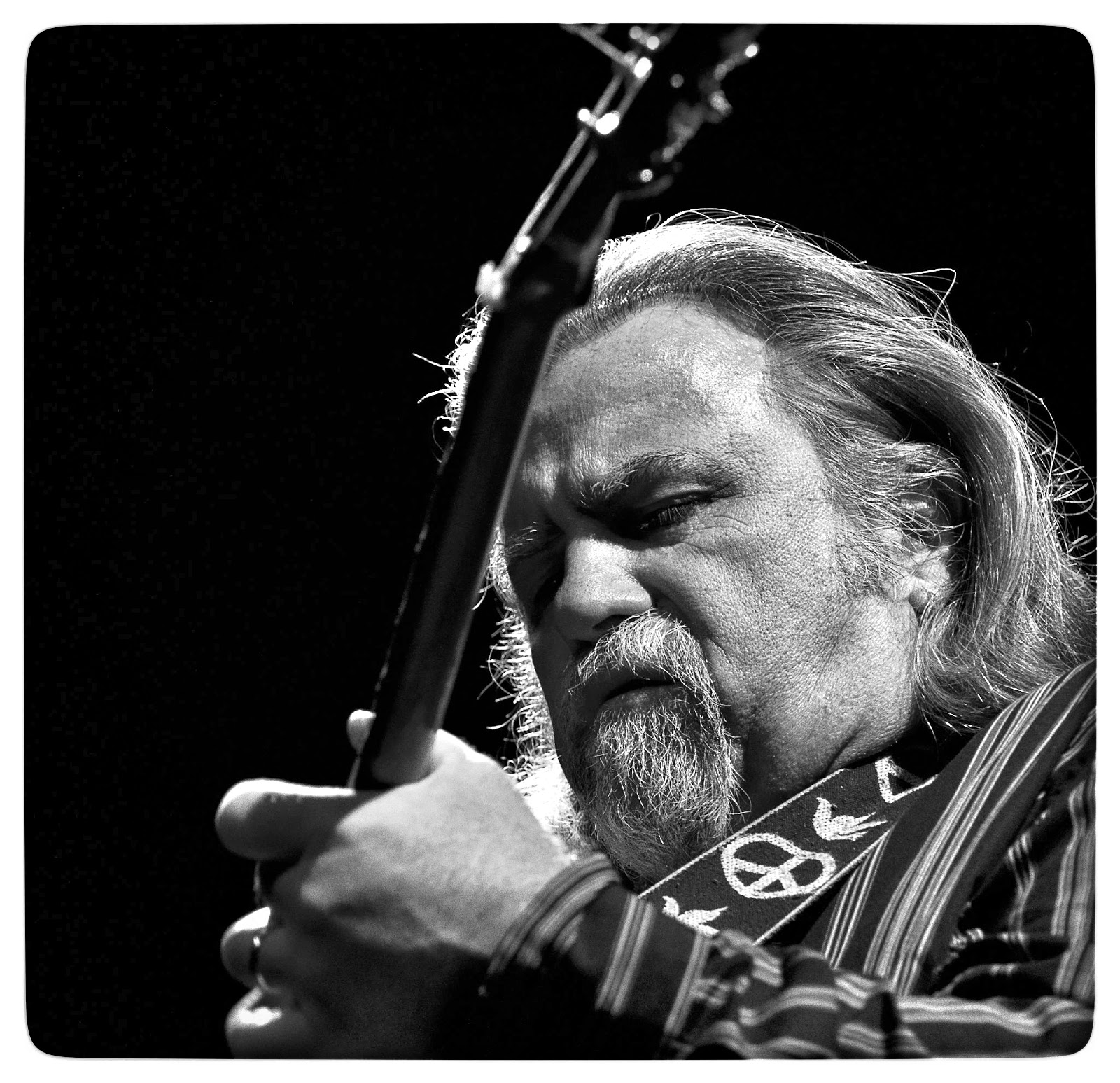 Sparks also found time to revive his interest in classical music, adapting Tchaikovsky's Nutcracker Suite to the guitar, a work that has been cited as a significant contribution to solo guitar literature. For Sparks it was a labor of love that earned him the National Fingerstyle Guitar Championship in Winfield, Kansas in 1993. 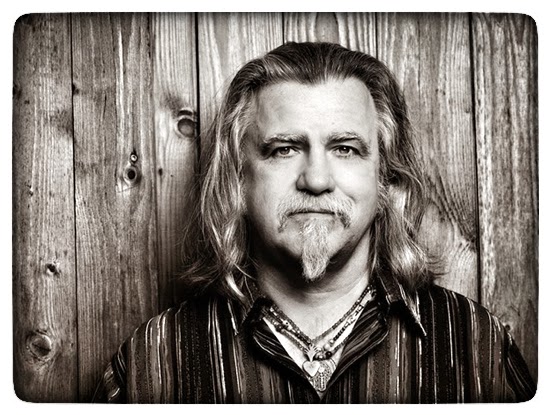 A sojourn abroad inspired his interest in European and Mediterranean styles, particularly the music of the Balkans. Upon his return to Minnesota, Sparks immersed himself in the ethnic music scene, performing on Oud and Saz in Middle Eastern ensembles and playing guitar in Greek, Klezmer, and Sephardic groups. This work culminated in the recording of Sparks' Balkan Dreams Suite, a remarkable collection of odd-meter guitar arrangements. Many of the Balkan Dreams compositions were recorded on Tim's debut solo CD, The Nutcracker Suite, in 1993. This recording was hailed by Guitar Player Magazine as "an exhilarating, odd-meter minefield inspired by Near Eastern music" and "an important recording from a gifted composer, arranger, and performer." Two more releases followed on the Acoustic Music label, Guitar Bazaar (1997) and One String Leads To Another (1999). 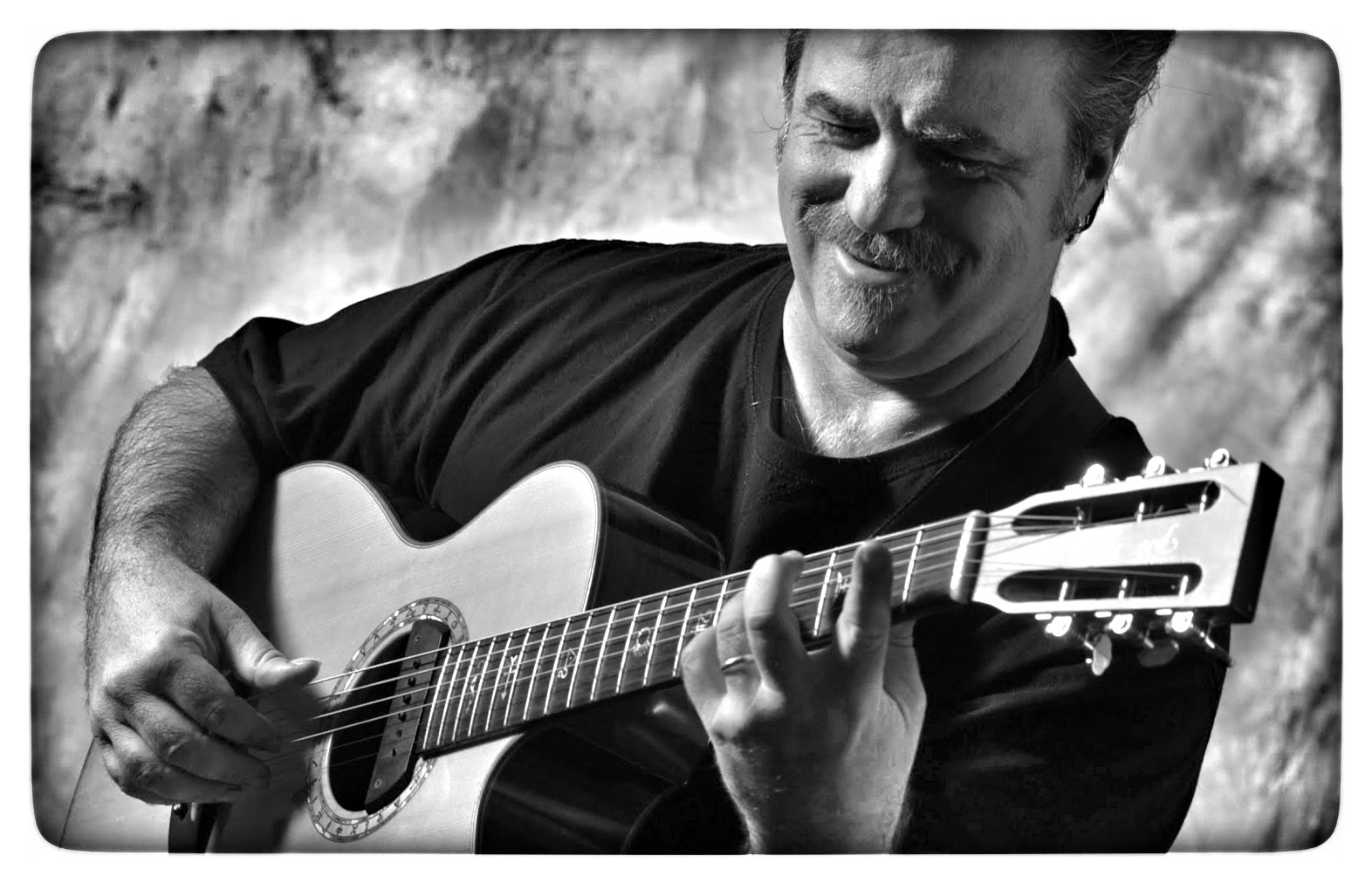 Sparks' work came to the attention of John Zorn, the saxophonist, composer, and curator of Tzadik Records in New York and thereby led to a new cycle of compositions inspired by traditional Jewish melodies. Neshamah (1999) is a solo effort. Tanz, which garnered Downbeat Magazine's highest praise, five stars, in 2000 and At the Rebbe's Table (2002) include ensemble work. All three releases have been acclaimed by a broad spectrum of critics and listeners alike. Spring of 2003 saw the release of Masada Guitars, featuring interpretations of John Zorn's music by Tim, Bill Frisell, and Marc Ribot. In recent years, Sparks' musical focus has come full circle, returning to the country blues and classic jazz that served as a springboard for his worldwide guitar explorations. He toured with Dolly Parton in 2005 and recorded Roots, Rags and Blues for Truefire/Acoustic Guitar Workshop. 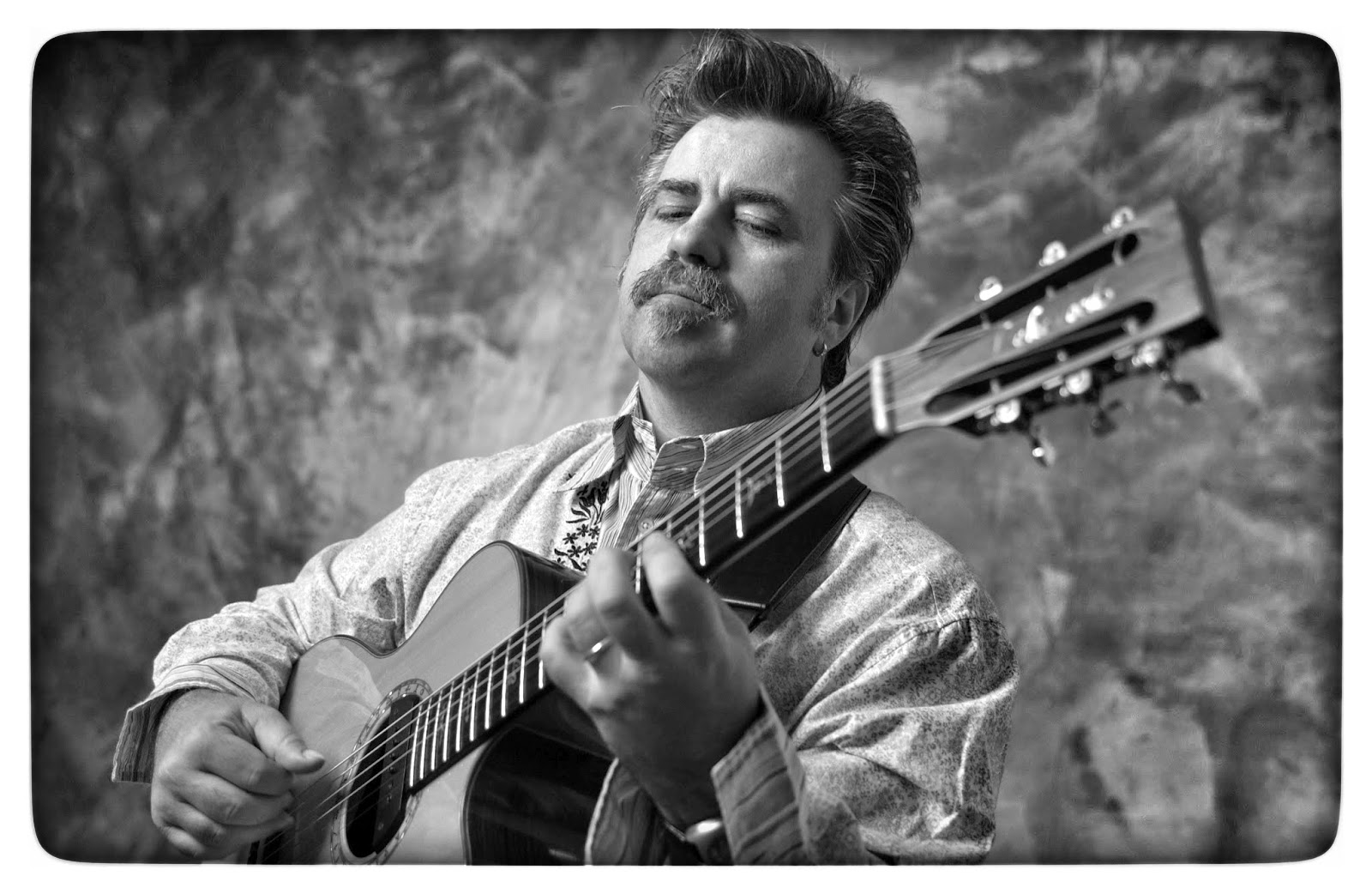 Sparks released Sidewalk Blues on the Tonewood label in February 2009 and recorded Little Princess, his fifth CD for Tzadik, in New York City on February 19, 2009. His last work, Chasin' the Boogie, was released in 2014 in Acoustic Music Records. Tim interprets pop hits (“Both Sides Now,” “Blue Bayou”) and traditional tunes (“Wayfaring Stranger,” “I’ll Fly Away”) with warmth, passion and a remarkable sense of harmony and rhythm.

What value brings to your discography your last work, Chasin' the Boogie?

Each guitar recording I have made since 1993 is a map of new paths I have found on the fretboard. The guitar is a labyrinth that one is endlessly lost in, always finding new ideas or new ways to say old things.

Chasin' the Boogie is both a recollection of special feelings I have about growing up in rural North Carolina and some new ideas of playing southern roots music. I use a drop D tuning with the  6th string tuned to D in most of these pieces but not always playing in the key of D,  but sometimes in G, A, or C.  This leads to very interesting chord voicings and orchestral qualities. The D chord in a drop D tuning is a big sound on acoustic guitar. For example, if you are playing in A, then the big D chord arrives as the IV chord with a very nice effect.

I first started working out these chord shapes when I made an arrangment of The Dearest in Bukovina for my Tzadik recording of the music of Naftule Brandwein, Little Princess.


What's the main difference between your last and your first recording, in terms of experience?

My first solo guitar recording was my version of Tchaikovsky's Nutcracker Suite in 1993. That recording set the pattern. Live performance feeling with minimal edits. This recording was done in a couple of weeks in 4-5 sessions, a few songs at a time.

When I worked with John Zorn on my Tzadik projects the first or second takes were always the best. Zorn’s recording process is very live. Zorn would prefer a take that had strong musical spirit even if the performance had some rough edges. He likes that.

In the case of Chasin' the Boogie and my Tzadik CD's, there was a only a short time spent in the studioo but I like to work that way. You give everything and don't second guess yourself. If you spend to much time with mutiple takes and editing to get the perfect rendition you may suck all the life out of the recording.

What gear do you use in this record?

I use a guitar made by Charles Hoffman, who is a luthier in Mpls. I prefer K&K pickups. I am using a new kind of string made by John Pearse which is brass wound arund a silk and nylon composite. It has the twang and bite of a steel string but is  light in action like a Classical or Flamenco string!


Tab for The Nutcracker Suite

Wich work of your own are you most surprised by?

In some of my Tzadik records, like Little Princess or Tanz, there is a lot of spontaneity in the way the pieces come together in the studio. Sometimes, the recording is the first fully realized version of a piece. In other cases, especially with solo guitar, there are songs which have been a long time fermenting.

There are always surprises, little things that just pop out that you weren't planning or expecting but they sound cool.

You work in a mixed genre space, your influences are classical, blues, jazz, folk, klezmer... is this a sign of our times?

Absolutely. The one constant for me in all those different styles is "Soul"  Everyplace in the world has a soul music, Enka, Fado, Klezmer, Blues.....

I have learned so much working with Greg Cohen and Cyro Baptista and I'm  very proud of the work we have done. In many ways my solo guitar work is a distillation, a memoir of 40 years of performing with  R&B and Jazz groups, Klezmer bands and Belly Dancers.

"Always know where one is" Howard Roberts.  "When rehearsing a difficult piece never stop and start over if there is a mistake. You need to learn to play the entire cycle even if there are some mistakes...and there are always mistakes" Roger Hernandez.


Tell me one musical work which has provoked a change in your music.

Why?  When I worked on Masada Guitars for John Zorn I was very challenged to make a solo guitar performance that would embody the songs from Zorn’s Masada Song Book. I had listened to the Masada Quartet on recordings and in concert and I was trying to express something about the their energy and mojo through solo, acoustic guitar. Zorn’s compositions can be both lyrical and complicated rhythmically. Working on this music stretched the boundaries of my playing. Zorn also encouraged me to be eclectic and use a wide variety of melodic ideas in the solos, playing atonally and with Klezmer modes and using jazz and blues riffs.

Do you like teaching? Do you remember specially any of your teachers?

I like teaching and sharing ideas. I recorded a course for Truefire.com in May that will be called the Fingerstyle Boogie Handbook.

Here is an example of a great guitarist from Brazil, Juliano Abramovay, who learned my version of John Zorn’s Ravayah and added some new ideas for his own, very cool.

The first record I bought was Out to Lunch by Eric Dolphy. Still one of the best!  The most recent record is Stravinsky: Music for Piano (1911-1942) - Aleck Karis

Sample of the tablature in PDF format

Melungeon?  I was born on Halloween and was always told the witch had left me on the doorstep and would be coming back to get me.

How's the recording and production process in Chasin' the Boogie?

Chasin' the Boogie was recorded by Peter Finger, who gets a really great sound by the way. We did the whole recording in one afternoon. Only one or two takes needed. Peter has a very nice studio where makes recordings and films of guitar. He knows how to get a great guitar sound.  Peter is based in Osnabruck, Germany.where he runs Acoustic Music Records. Peter is a very brilliant and original guitarist!

I have been working for a few years on a collection of  solo guitar versions of music by Stravinsky, Prokofiev and Shostakovich which I hope to get recorded in the near future. Here is an example of my arrangement of a dance from Stravinsky’s Petroushka: 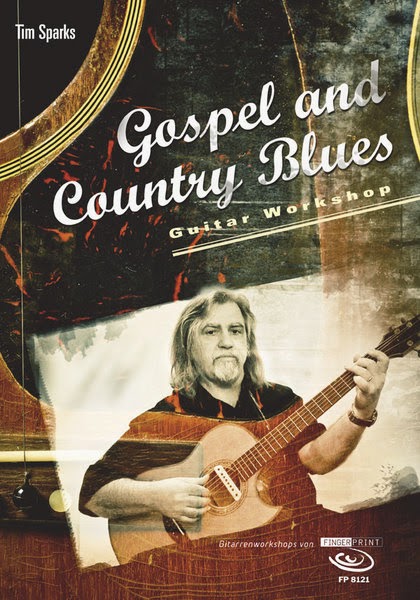