Jonathan Eric Wilson is the creator of the TogaMan GuitarViol (a bowed guitar, viola-guitar hybrid heard in many movie scores, TV, Video games.) Some examples of the GuitarViol's use in Film include 300, the Black Swan, Clash of the Titans, TV's True Blood, CSI Miami, CSI New York, and Video games such as Medal of Honor and Borderlands (Borderlands features Jonathan himself playing the GuitarViol). He has a solo album out on Lakeshore Records and is now developing a
Psychedelic Rock project called "Liquid Light Brigade". 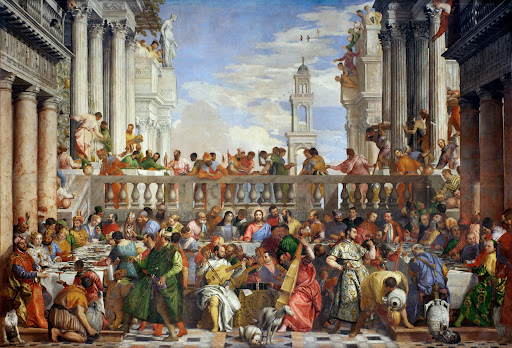 In the early 1500s, Paolo Veronese painted his masterpiece painting "Noces de Cana". Noces de cana is a depiction of the wedding feast in the Bible where Jesus turned the water into wine. In this painting, Paolo included a portrait of himself wearing a toga and playing a curious guitar-like instrument with a BOW. Often referred to as a "vihuela de arco" or "tenor viol", these were essentially guitars (of the day) that were designed to be played with bows. This practice had its origins in 15th century Spain where Moroccan bows were imported and wielded to these early guitars.


This important (albeit lesser known) part of the guitar's family tree grew into a family of instruments called viols. Like today's guitars, they were very popular for many of the same reasons that the guitar is popular today. The tuning, fretted fingerboard and playing position of these early viols (bowed guitars) were virtually identical to today's guitars.


Viols and viola da gambas were essentially bow-able guitars ("leg viols") that pre-dated modern violins and cellos. They usually had six or seven strings and fretted fingerboard. Like todays guitarists, da gamba players used varied tunings and improvised (Jammed).
The guitars common tuning lends well to simple chords that lay nicely under the hand. However, by the 1700's, these heavenly sounding bowed string instruments all but died off due to the modern violin family's greater volume and ability to fill a concert hall with sound. With today's amplification and building know-how, there are no excuses.

The "Arpeggione" was a bowed guitar invented by Viennese luthier named Johann Stauffer in 1823. (Stauffer taught a certain C.F. Martin how to build guitars.) Franz Schubert wrote a fine sonata for it. Today, Schubert's "Arpeggione Sonata" is commonly played on the Cello.

Back in the 1960's, Eddie Phillips of a band called "The Creation" may have predated Jimmy Page in the use of a bow on the electric guitar. Although some cool effects were achieved, the guitars traditionally flat string plane will not allow for effective bowing. Phillips and Page were limited to a few cool psychedelic sounds. To effectively bow each individual string, it is essential that an arcuate (round) string plane, bridge, and fingerboard are considered in the design. (like a violin or cello).

Jonathan Wilson dreamed of having a truly bow-able guitar as far back as the early 1980's. The only problem was that none were available and he would have to design one. In 1989, after reading an encyclopedia article about Staufer's "Arpeggione" (an epiphany!), Jonathan decided it absolutely had to be done. In 1990, he brought his design and specs to a local Russian luthier (who he met on a bus!) to build the prototype "Electric Arpeggione".

This prototype was completed in late 1993/early 1994. A beautiful instrument, it suffered from ergonomic/balance difficulties and required a stand (for more stability-neck heaviness) to be bowed effectively. After several years of this, Jonathan returned the drawing board in early 2001; leading to a more evolved viol. With no marketing except a MP3.com site with Jonathan's music, orders began to come in somewhere in late 2002. Since that time, top TV/Film composers have embraced the instrument. A few include "300" (Warner Bros.), CSI Miami (CBS), Curious George, Madagascar and many more being added all the time. To this day, Mr. Wilson is constantly improving the instrument to realize its maximum potential.

Over the last several years, Jonathan began a quest for the ultimate GuitarViol design. It was time to think "outside of the box." Many template mock-ups were made. It had to feel right. It had to be played in the most relaxing stance as possible. For bowing, there could be no "neck heaviness". In fact, this was not to require a stand (one less thing to drag to a gig!). It would not make it to a drafting table until it felt absolutely right.

And while "thinking outside of the box", the scale length was revisited as well. Instead of 25.5" inches, it felt right at 21.00". This falls somewhere between a Viola (16.00") and a typical guitar (25.5"). This shorter scale yields some surprising benefits:

As it turned out, one other major issue had to be dealt with. This had to do with the fact that conventional pickups work very poorly for amplifying bowed strings. This was due to the fact that bowed strings move in a horizontal "Planar" motion when bowed. When a string is plucked, it moves in a circular elliptical motion.

The horizontal plane that a bowed string moves in is not in a favorable path for pickups that are typically placed 90 degrees below that horizontal plane. Using a clock for a model, Imagine a string moving from 9 O'clock to 3 O'Clock with the pickup placed @ 6:00 O'clock. This applies to both Magnetic (electric guitar) and under-saddle piezo (acoustic guitar) pickups. The resulting sound is weak, scratchy and nasally. Cooperative R&D with Graphtech yielded astonishing results.

The initial design had six individual pickups (one per string) in one saddle. The only concern was that if a pickup needed replacing for some reason, the whole saddle (all six pickups) had to be thrown out. The other issue was the need to adjust the intonation on each string. Jonathan Wilson collaborated with Bruce Johnson and Graphtech on an intonatable bridge with individual saddles. This is common practice on electric guitars but not common practice on a bowed instrument bridge. Further, each saddle contains a pickup for each string. The results, again, are astonishing!! The bowed sound is rich, fat, and acoustic sounding!!