The main objects of this invention are:

First, to provide a combined bridge and tail piece for stringed musical instruments such as guitars and the like which may be readily embodied in standard types of such instruments, and also of special construction or design, and which is highly efficient in supporting the strings and sustaining the load thereof.

Third, to provide a combined bridge and tail piece having these advantages, which is economical in structure and at the same time easily applied, and which is attractive in appearance.
Objects relating to details and economies of the invention will appear from the description to follow. The invention is defined and pointed out in the claims.

Ned Steinberger (b. Princeton, New Jersey, 1948) is an American creator of innovative musical instruments. He is most notable for his design of guitars and basses without a traditional headstock, which are called Steinberger instruments. He also has a line of electric basses and string instruments through his company called NS Design and was also the designer of the first ever Spector bass, the NS.

Ned is the son of physics Nobel laureate Jack Steinberger.

Stringed musical instruments US 4192213 A

Resumen
A stringed musical instrument such as an electric guitar or an electric bass guitar is balanced to render the instant comfortable to play, supported by a support plate at its center of gravity. The tuning machines are on the body for the purpose of balance. The neck should be of proper weight and rigidity to sustain greater tone and brilliance.


Description of the Patent
The present invention relates to improvements in stringed musical instruments, and more particularly, to an electric bass guitar having its neck and body in a balanced relationship to each other.
The need for a compact electric guitar-like instrument to substitute for the cumbersome, large, upright acoustical classical string bass was recognized quite early. In 1951, Fender brought out into the marketplace, a solid-bodied, four-stringed guitar with the compass of the acoustic bass, and to which, even though fretted, classical bass guitar players could easily adapt themselves.

This instrument became the forerunner of a large family of similar types, sometimes simply called bass guitars.
Electric basses are usually provided with at least one pick up. They can be distinguished not only by their four rather than their six strings, but by the length of the strings, which are 30-34 inches, as compared with about 25 inches in the normal six-stringed guitar. Electric basses are usually classified according to their physical construction. The conventional solid-bodied construction is the most commonly used, because it is made from a flat slab of solid wood or lamination.

This problem has been met in the past by manufacturers to achieve superior sound by using relatively heavy aluminum necks. Such instruments are overweight and neck heavy. Instruments of the past with acceptable balance and weight invariably have had limited sustain and brilliance of tone.
The playing of a heavy musical instrument or an instrument with a heavy neck and poor balance, is an unpleasant experience because of the tension, fatigue and strength which is put on the body of the player, particularly after playing for long periods of time.

These shortcomings, due to the heaviness of the neck and peghead in relation to the body, creates an unbalanced musical instrument, uncomfortable to play with and difficult to manage properly.
On the other hand, in studying the behavior of a vibrating system such as a vibrating string, it has been found that when the string vibrates between two fixed end points, it tends to shake and make them move. When the end points move due to the vibration, they take energy from the strings, reducing the sustain and muting the tone.

Therefore, in order to increase sustain (length of tone) and brilliance of tone, it is necessary to have as much weight as possible at the ends of the strings (close to the bridge and in the neck). The end of the string is effectively at the bridge and at the fret being played. Therefore, the entire neck is important. It is important to make the instrument as rigid as possible, strong and stiff, whereby the neck cannot vibrate independently of the body. I found that by increasing the stiffness of the neck as well as its weight within very close limits, sustain and brilliance of the vibrating string is increased, whereby the quality of the tones is greatly improved.

It is a well-known fact that an unbalanced musical instrument creates unnecessary strain in the neck and shoulders of the player because the player inadvertantly holds the instrument in an awkward position. I have also found that this problem has been eliminated by having the center of gravity located close to the fingerboard at the lower end thereof, on a 24-fret guitar. Generally, the center of gravity should be located near the 24th fret.

The advantage of having the center of gravity at the end of the fingerboard is that the neck does not have to be supported any more and hangs free on a support in a stable equilibrium with the body and the other parts of the instrument.

According to the present invention, sustain and brilliance of tone are achieved in a stringed musical instrument by providing a fulcrum and convenient support means located at the center of gravity of the instrument where the neck is highly rigid and balanced by the tuning machines being on the body, thus, overcoming the difficulties of the prior art in an instrument comfortable to play.
It is an object of my invention to provide an electric bass guitar which has its center of gravity close to the lower end of the fingerboard on a 24-fret guitar.


It is another object of my invention to provide an electric bass guitar which provides a high quality and proper bass tone.
A further object of the present invention is to provide a stringed musical instrument such as an electric bass guitar wherein the weight of the body, tuning machines, bridge and pick-up elements are balanced with the weight of the neck about a fulcrum located at the center of gravity of the instrument in such a way that rotation thereof about this pivot point can be accomplished without substantial effort on the part of the player for selectively adjusting the angle of the neck in relation to his hands and body.

The teachings of the present invention provide an electric bass guitar including a neck, preferably made of a reinforced polymer material such as carbon fiber bonded with epoxy. This composite material has a desirable high modulus of elasticity and good density. The excellent physical properties of carbon fiber composites make them a suitable material for the construction of a guitar neck.

Although such novel feature or features believed to be characteristic of the invention are pointed out in the claims, the invention and the manner in which it may be carried out may be further understood by reference to the description following and the accompanying drawings.

Tremolo devices have been used for many years with stringed musical instruments for creating a vibrato sound. Various structures have been proposed and utilized for this purpose.
Broadly, a tremolo mechanism allows the musician to change the tension on all of the strings of the instrument simultaneously to create a pitch change during vibration of the strings. Typically, a moving tailpiece on the body of a guitar is utilized to accomplish this tension change. In such a mechanism, a pivot point is established and the tailpiece pivots about that point. A counterspring may be utilized to counteract the pull of the strings on the tailpiece; as disclosed in U.S. Pat. No. 4,632,005. A handle is generally provided for pivoting the tailpiece while simultaneously playing the instrument. 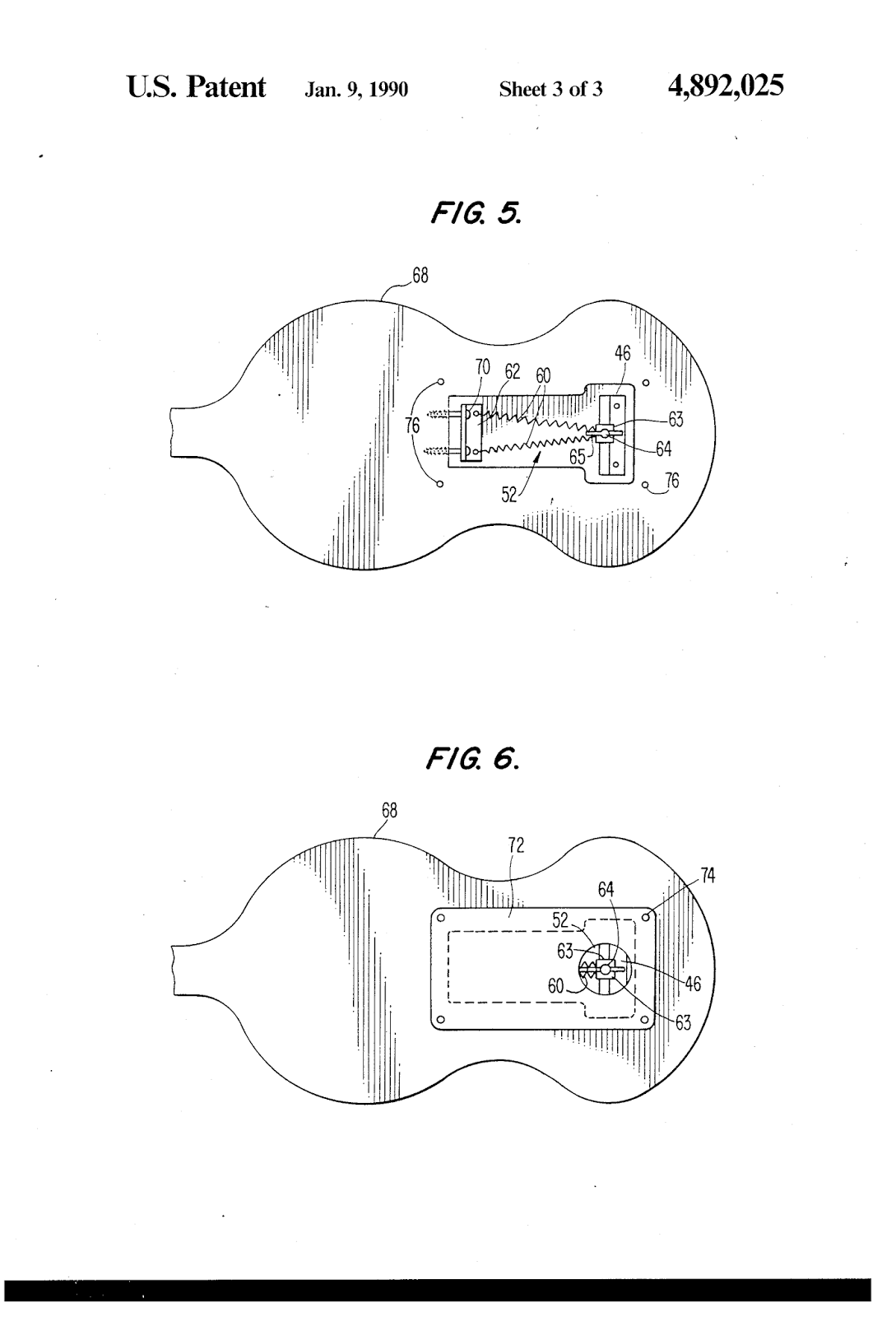 The present invention relates generally to musical instruments of the lute family (both electric and acoustic). In particular, the invention is a Capo which may be moved from place to place on the neck of a lute family instrument by merely sliding the Capo along the neck.

A Capo is a device for clamping the strings of a guitar or other stringed lute family instrument against the neck of the instrument in order to change the pitch of notes played. In the past, most Capos have involved screws, cams, and spring loaded clamps for attaching the device to the instrument neck.

Spring loaded clamps have become popular because they can be opened and moved to a new position with one hand. However, one problem with prior art spring loaded Capos is that they require the musician to release and manipulate the Capo in order to change its location, and are hence relatively inconvenient to use, particularly during a performance.

Sliding type Capos also have been known in the prior art, e.g., U.S. Pat. Nos. 4,621,558 and 5,033,349, however these Capos have alignment as well as other problems. In the '558 and '349 Capos, for example, the Capo can easily turn with respect to the instrument neck and/or jam. During a performance, artists should not be distracted by the necessity of using care when moving a Capo. Additionally, prior art Capos intended to be used with curved fingerboards, e.g., the '558 patent, have a roller which is of non-uniform diameter, giving an unsightly appearance.

SUMMARY OF THE INVENTION

The invented Capo slides along the neck of the instrument, guided by a track, preferably comprised of a channel or shoulder on either side of the neck. A substantially rigid cross beam spans the fingerboard laterally, carrying a pair of elongated flanges which ride in the track. By elongated is meant relatively long in the lengthwise direction of the neck. I have found that a flange length of about one half of the width of the root of the track is adequate to prevent jamming of the Capo, and to keep the Capo aligned substantially parallel to the frets.
A shaft carrying a cylindrical rubber roller also spans the fingerboard, running in a pair of bearings in the cross beam. The position of the bearings normal to the fingerboard is adjustable, enabling the roller pressure against the strings to be set. When used in connection with a curved fingerboard, the shaft is flexible so that it can bend, permitting a cylindrical roller to be used. Hourglass shaped rollers used in the prior art are more difficult to fabricate than are cylindrical rollers, and are less cosmetically pleasing.

1. Field of the Invention
The present invention related to a support for defining an end point of the vibrating portion of the strings of a stringed musical instrument.

2. Description of the Related Art
Many present day guitars and similar stringed instruments are equipped with a tremolo. The musician, by manual manipulation of the tremolo, can control the pitch of the instrument. However, difficulties have been encountered in the past in controlling the pitch of the strings both during and after tremolo operation.

SUMMARY OF THE INVENTION 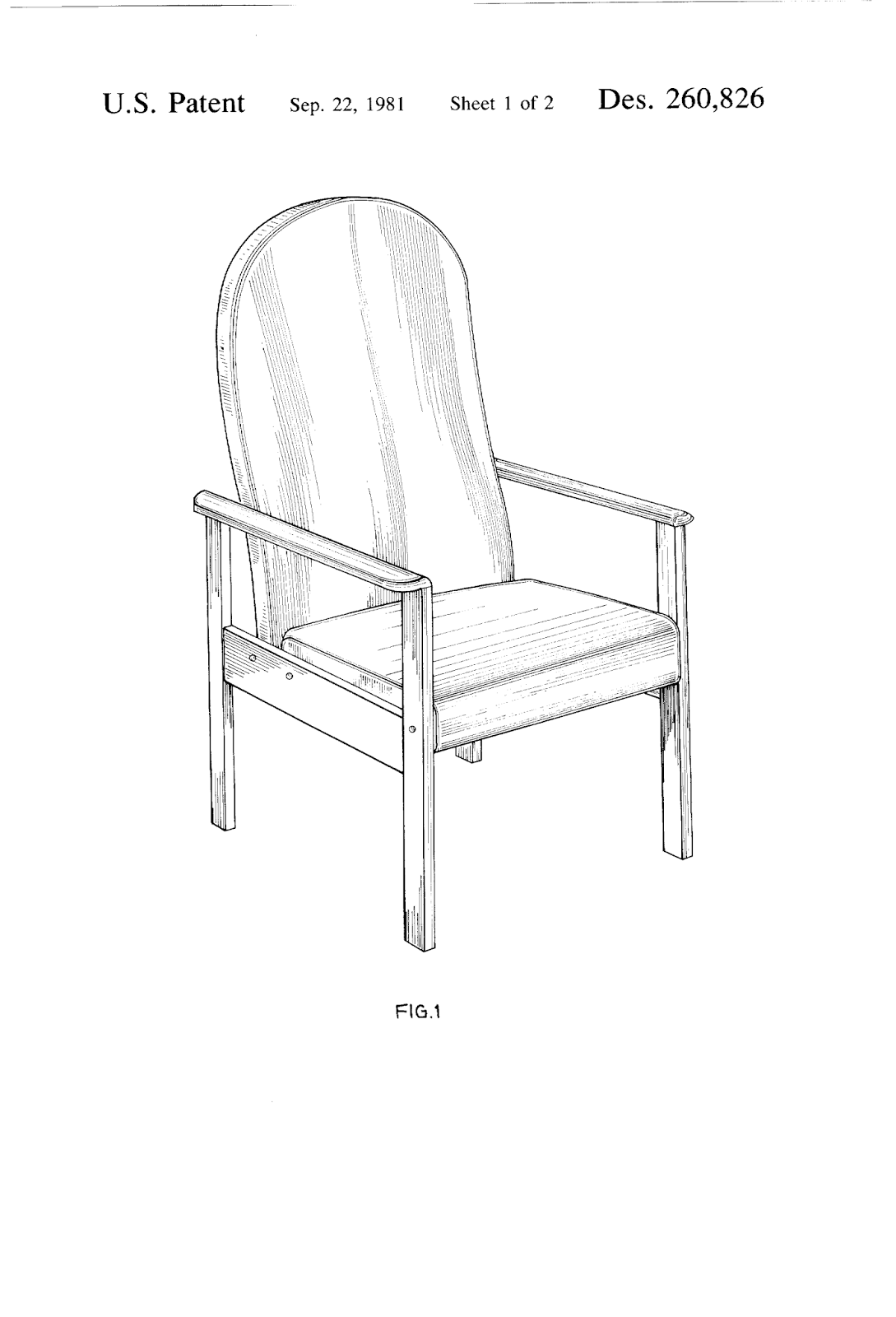 Coming Next Week to Prepared Guitar
The Steinberger Story