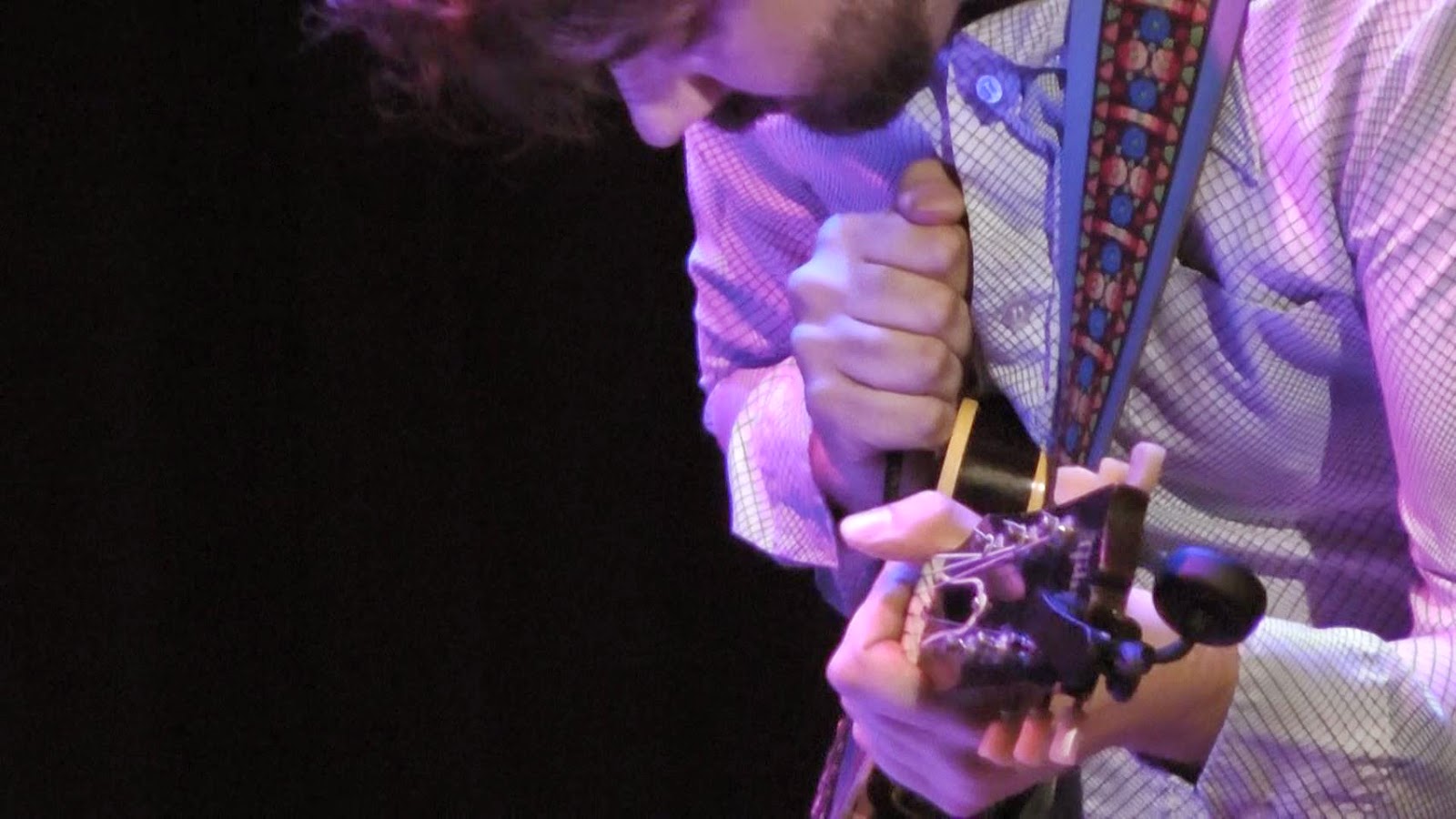 James Moore is a versatile guitarist and multi-instrumentalist. A native of the San Francisco Bay Area, he has been active in New York since 2006, earning the titles of "local electric guitar hero" by Time Out New York and "model new music citizen" by the New York Times. Performing on a wide array of guitars, banjos, mandolins and home-made instruments, James incorporates his classical training and a healthy dose of improvisation, theatrics, and experimentation. 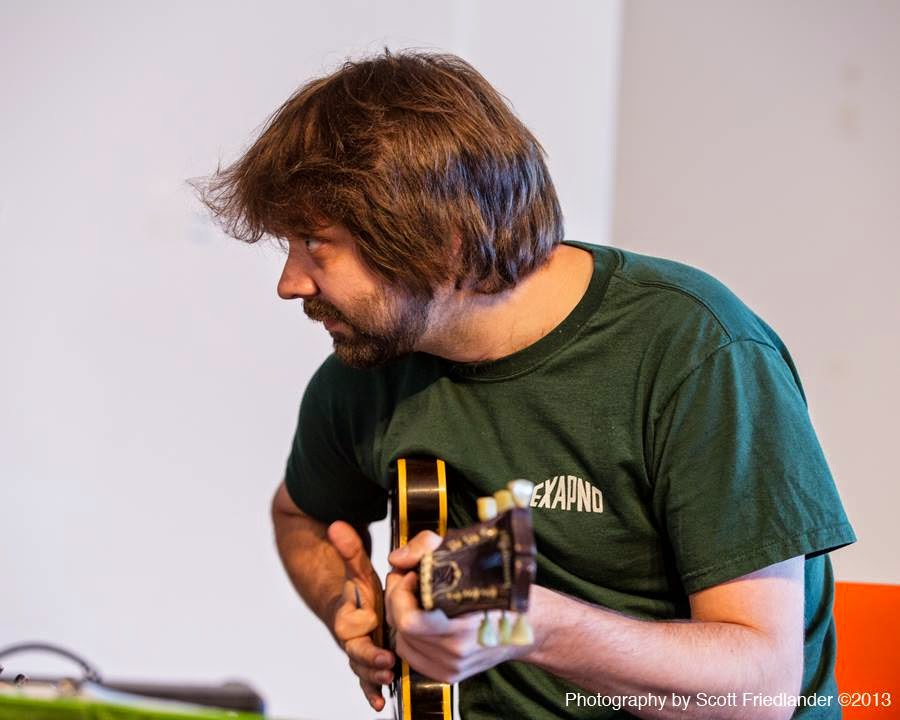 You may have found James in a variety of performance situations: at the Ghent Jazz Festival performing John Zorn's Book of Heads for solo guitar; at the Pompidou Center in Paris as an on-stage musician and actor for playwright Richard Maxwell's Neutral Hero; at the Brooklyn Academy of Music playing the music George Crumb on mandolin and singing saw with soprano Dawn Upshaw; at the Fringe Theater in Hong Kong presenting apocalyptic multimedia works with his guitar quartet Dither; At the Kennedy Center in Washington DC performing David Lang's electrified music for Susan Marshall's dance piece Play/Pause; at the Barbican Center in London playing the music of Michael Gordon with Alarm Will Sound; at the Whitney Museum interpreting graffiti compositions by Christian Marclay with Elliott Sharp; at The World Financial Center strumming a ukulele with the pop/chamber group Clogs; at the Kitchen playing with members of Wilco and The National. 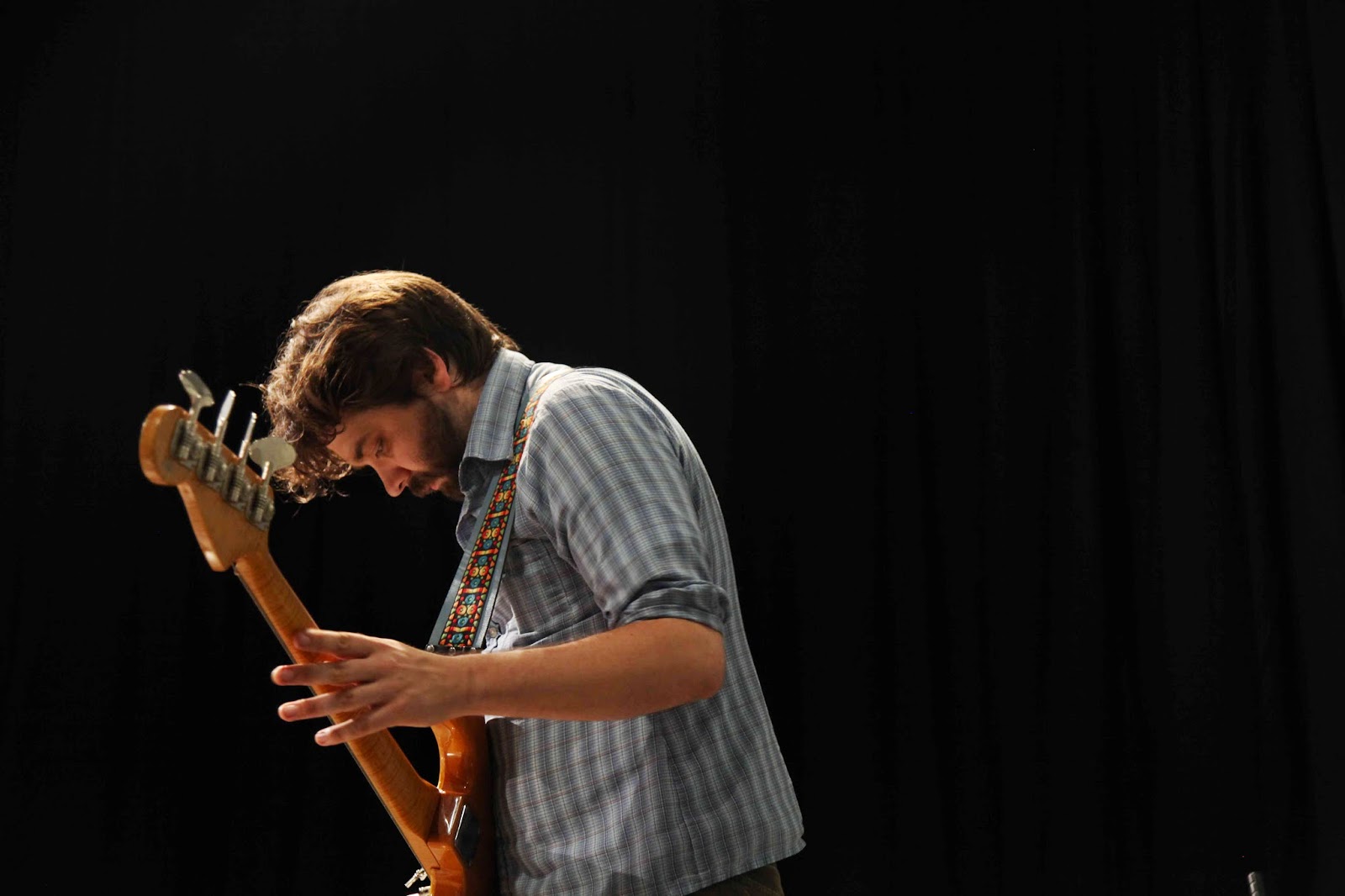 James is a founding member and director of Dither, a raucous electric guitar quartet that is gaining international recognition for precision playing and creative programming. Other projects include The Hands Free, an acoustic quartet; Forever House, a rock band; Florent Ghys's low string quintet Bonjour; Corey Dargel's elegant song cycle Hold Yourself Together; and a duo with violinist Andie Tanning Springer. James's first solo recording (Zorn's Book of Heads) will be released on Tzadik in 2015. He can also be heard on releases for Touch, Bridge, Henceforth, New Amsterdam and Nonesuch Records. 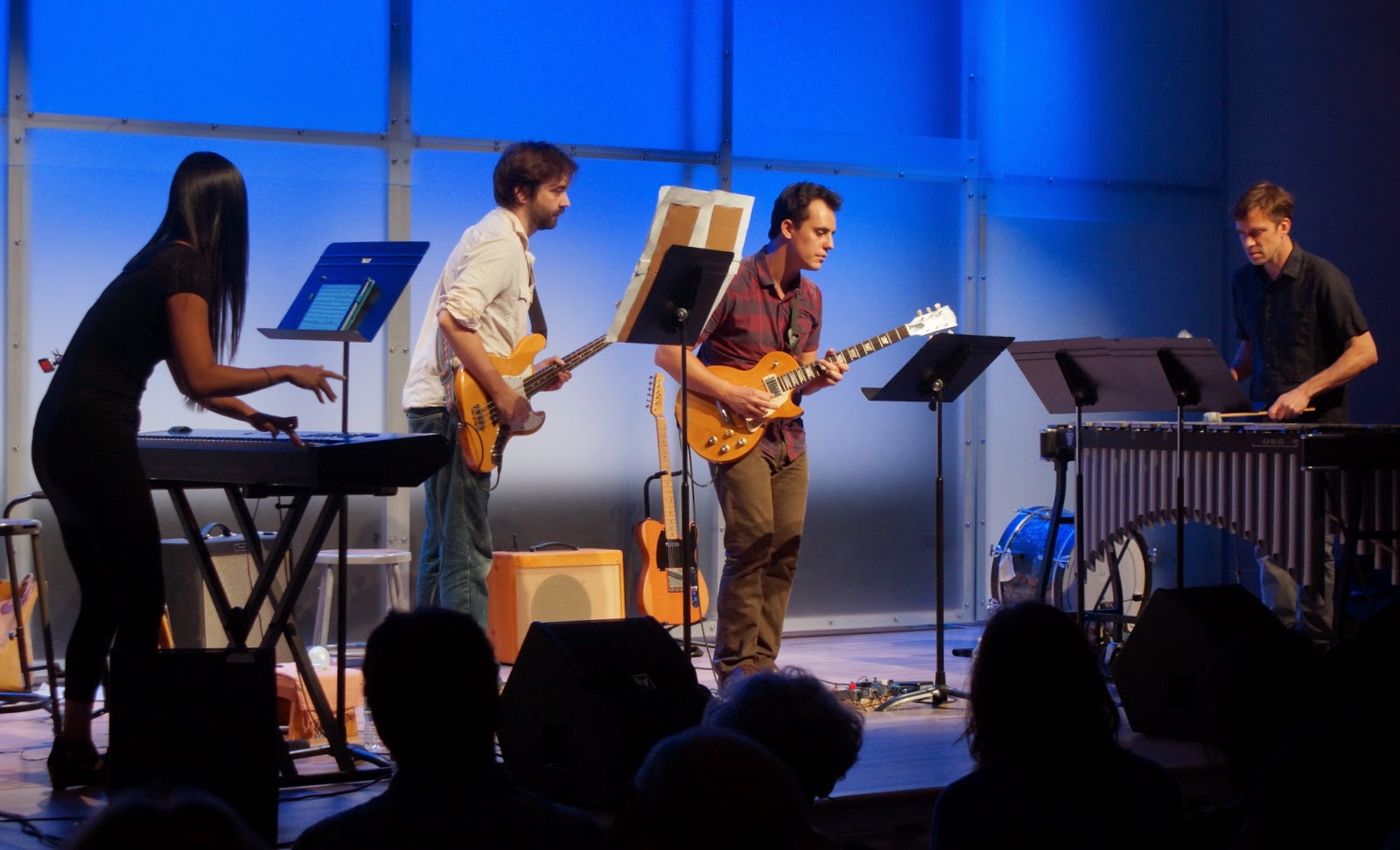 James received his Master of Music in guitar performance from the Yale School of Music and his Bachelor of Arts in guitar performance and electronic music from The University of California, Santa Cruz. He has served on the faculty of Princeton University, and he has been a guest artist at universities across the country. His essay on the manuscripts of of Cage/Cowell/Harrison/Thomson's collaboratively written Sonorous or Exquisite Corpses was recently published in Arcana: Musicians on Music. 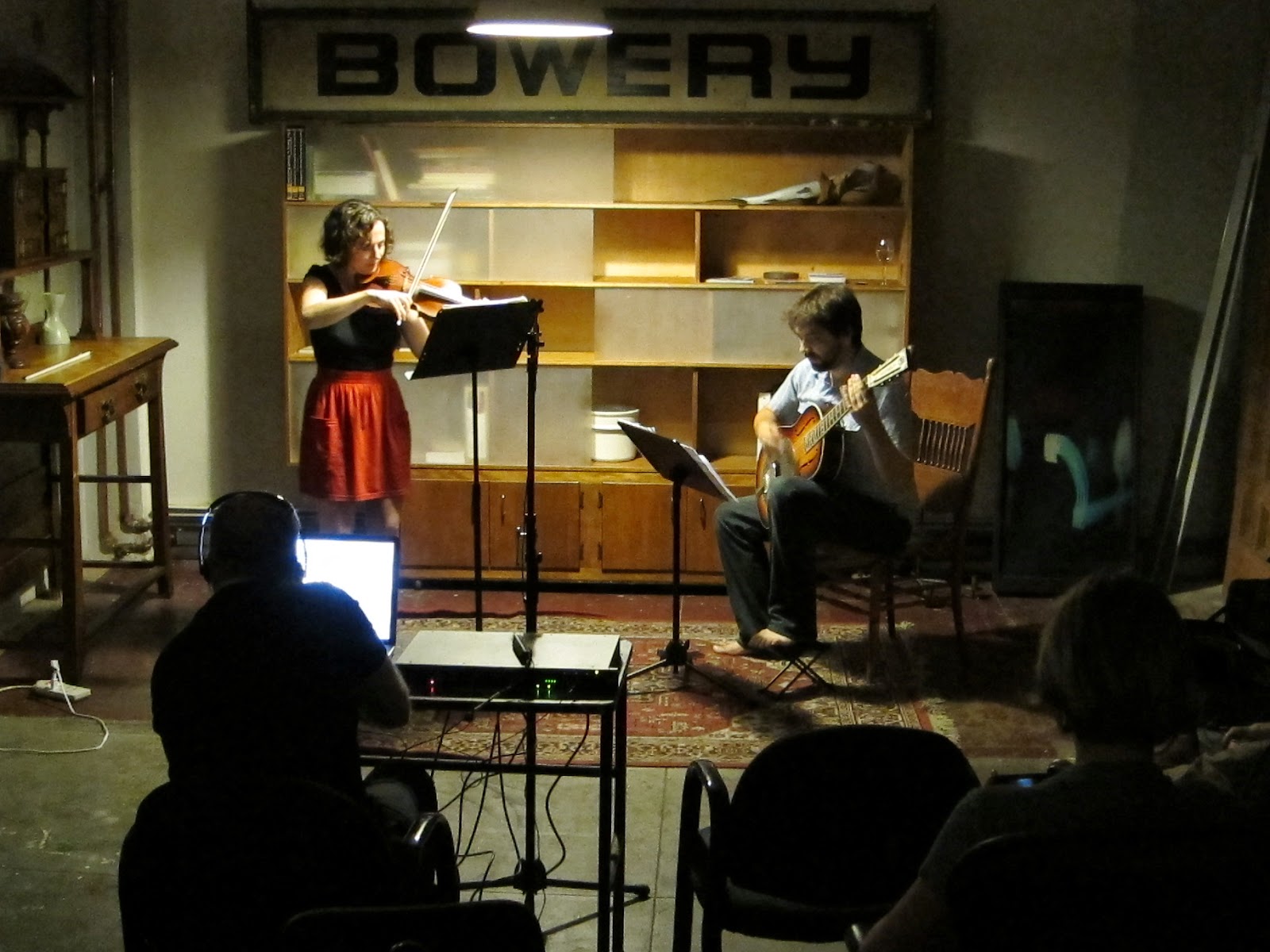 What was the first musical structure you remember?

My earliest musical memories are singing with my family. My grandmother knows a seemingly infinite amount of folk songs and taught a handful of them to my sister and me. I think I acknowledged a simple “structure” at an early age – usually these songs have one A section, which you repeat ad nauseam over the course of many verses. The lyrics vary but the melodic hook of each verse often stays the same.

It was actually my sister’s guitar. I played piano and clarinet, and was just starting to get into rock music. One day I stole the guitar from under her bed and started playing chords from a book of simple folk songs. It was a small no-name nylon string which I’m sure sounded horrible, and I’m not sure what became of it.

Guns N’ Roses “Patience”? I could fake it!

I was self-taught at first, and after a few years I took lessons at the local music store. My teacher tried to get me to do more technical things but I was a really horrible student and rarely practiced what he gave me (of course, now I’m frequently on the other side of this…). However, I was playing all the time, learning songs on my own, writing music with my bands, and exploring all sorts of weird sounds. It wasn’t until college that I started getting serious on a technical level – I wanted to major in music so I figured what the hell, I’ll learn to play classical guitar. I thought it would be easy, but I was sorely mistaken. My teacher Mesut Özgen started me from square one, and this time I was in for the long haul.

A teenager of the 90s, the first CD I bought was the Wayne’s World soundtrack! Most recently, I bought five LP’s from a 25 cent record bin in Urbana, IL: The Ventures play Telstar; Charles Ives: Music for Chorus; two Deutsche-Grammophon records of Gregorian chant (The Mass, and The Office of the Dead); and a children’s record of Jack Nicholson reading Rudyard Kipling’s Just So Stories with music by Bobby McFerrin.

As much as I love a serious high profile gig, my favorite moments are casual and silly. A recent pleasure was recording an album of odd lullabies for a friend’s new baby – a colleague and I found ourselves on tour with a fair amount of time on our hands and an 8-track at our disposal. Those moments of fun, uninhibited creation are the best.

I have worked quite a bit with theater, dance, art, and multimedia, and many of these experiences have been formative for me. Over the past four years, I’ve worked with the playwright/director Richard Maxwell. In Neutral Hero I on stage for the entire play performing on guitar, banjo and piano, as well as singing and delivering a long monologue at the beginning of the show. Richard is very demanding of his players in regards to focus and intention in every action, both musical and physical. While this was frustrating at times, I’ve taken a lot from these experiences, and it’s informed my approach to live performance.

Dither plays Paula Matthusen: but because without this

You wouldn’t be able to perform music without some kind of technique– every player has one, whether it’s stemming from a refined tradition or discovered through intuition and exploration. We all draw upon what we have available to us and practice the things that we are most excited by, whether it be classical finger-style, high distortion finger-tapping, or rubbing balloons on our guitar. Developing “a technique” is essential, and approaching it in a disciplined way is important. Developing “technique” in the formal sense can be very rewarding, however it is ultimately unnecessary.

Lately I’ve been more active as a composer, writing music for groups old and new. I wrote a set of tunes for the duo I have with violinist Andie Springer, and most recently started a new group The Hands Free, an acoustic quartet of myself with Nathan Koci on accordion, Caroline Shaw on violin and Eleonore Oppenheim on double bass. In general, I’ve been writing a small but dense amount of material, and incorporating different approaches to directed improvisation. The results have been really exciting and satisfying, especially because I have been able to slowly troubleshoot and sculpt the pieces over time with talented and patient friends.

Well, 20 years ago I was an adolescent just beginning to explore the guitar. Of course there are many things that I wish I had ingrained earlier, but anything I would advise myself would probably work against an otherwise healthy musical evolution. I think my first album I made when I was 14 (which among many things features a duet for piano and hairdryer, and a guitar solo imitating the sound of our family modem) is way cooler than anything I have done since.

Benjamin Verdery, my guitar teacher at Yale, once said something along the lines of: “Of course things go wrong sometimes, otherwise why would we even play? Dealing with things in real time is the fun and the art of performing music.”

Dither - Fred Frith - The As Usual Dance Towards the Other Flight to What is Not.

I am excited to be finishing up two releases of John Zorn’s music for Tzadik: A CD/DVD of his collection of solo guitar etudes The Book of Heads, and an album with my guitar quartet Dither of his game pieces Hockey, Fencing and Curling. I’m also looking forward to a record of duo music with Andie Springer, and continuing to write music for my groups The Hands Free and Forever House. Richard Maxwell’s next theater piece The Evening will take up a chunk of the coming year as well, premiering at the Walker Center in Minneapolis in January followed by tours in the US and Europe. 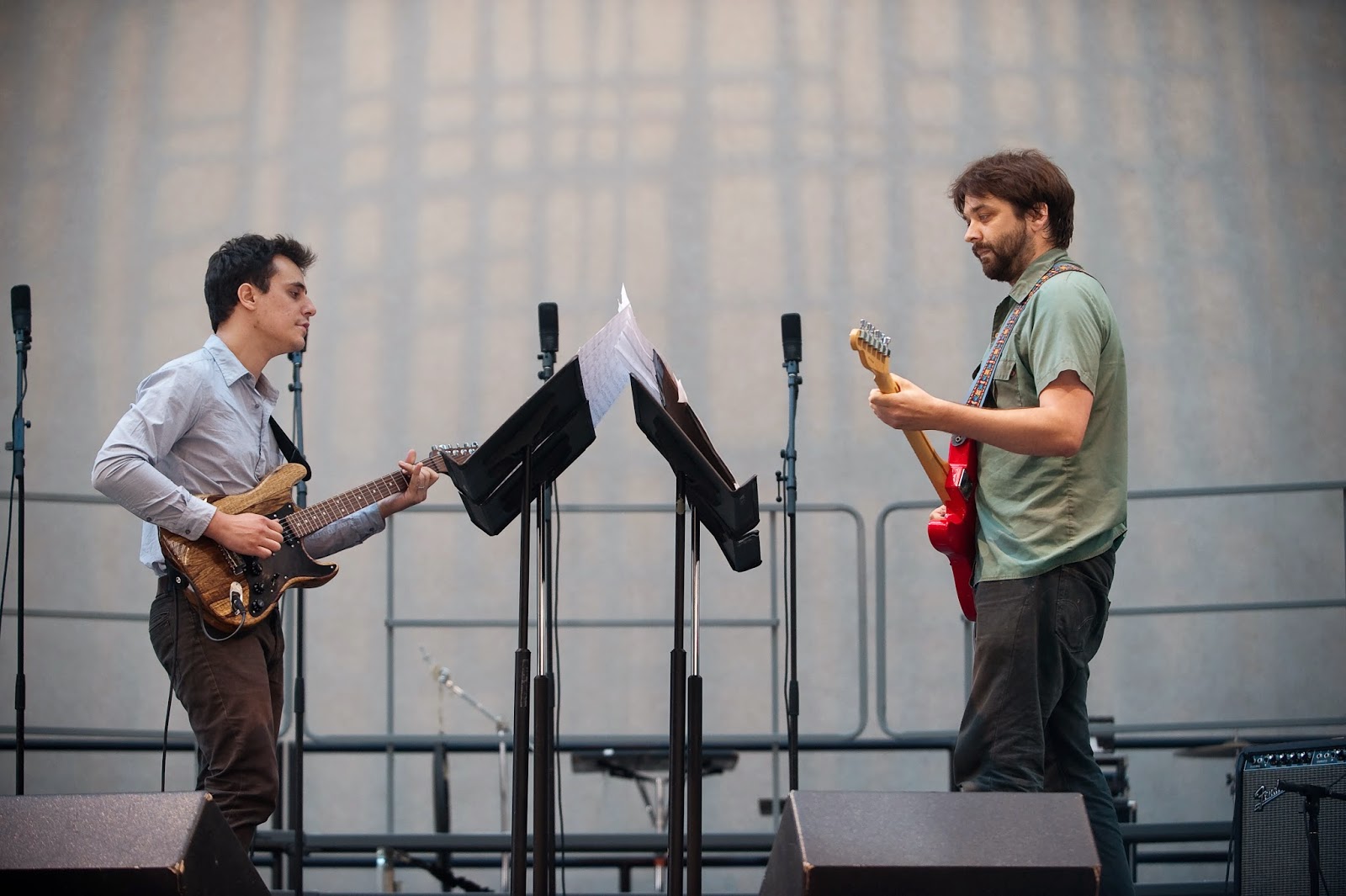 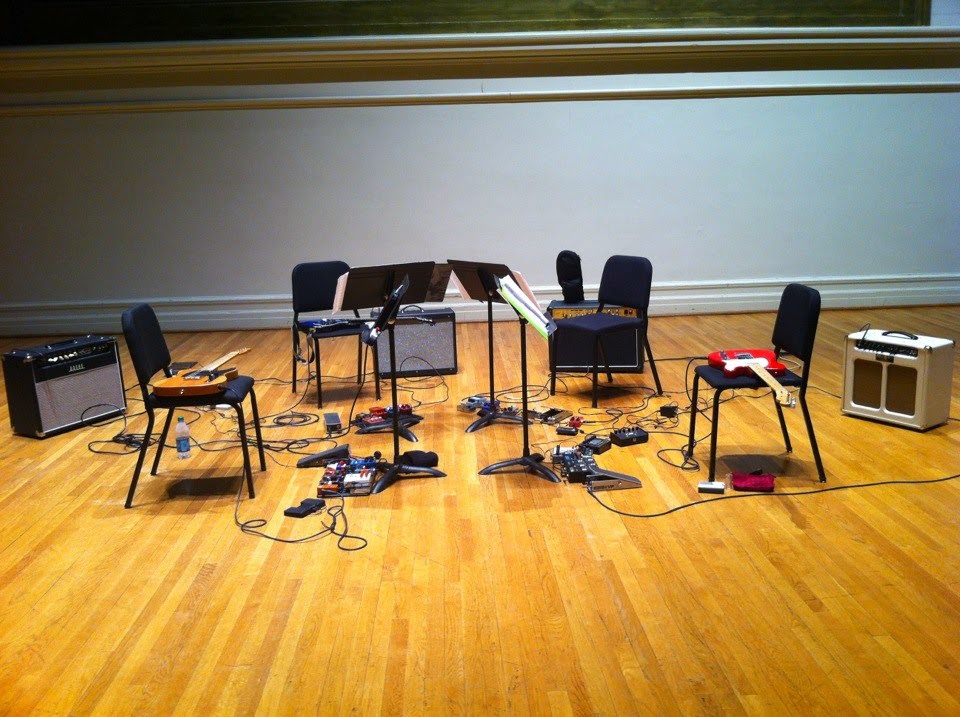 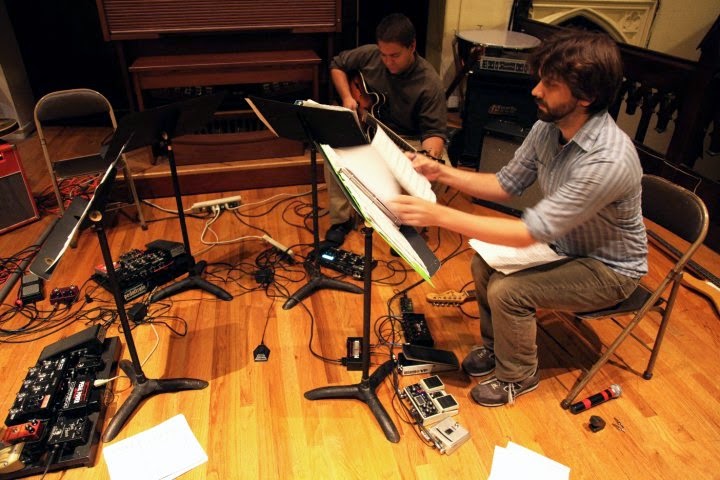 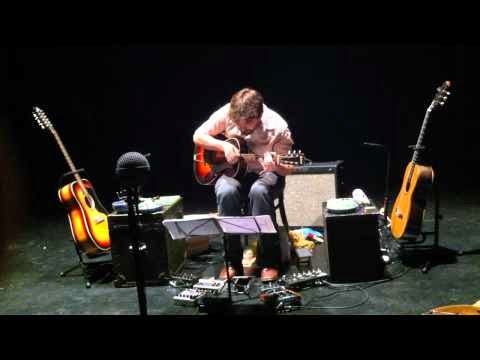 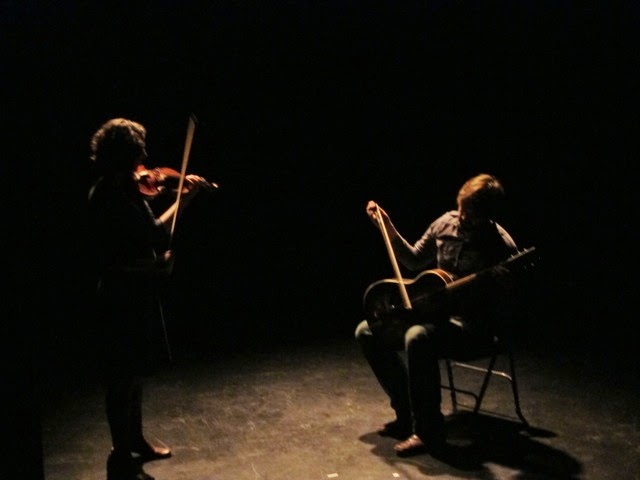 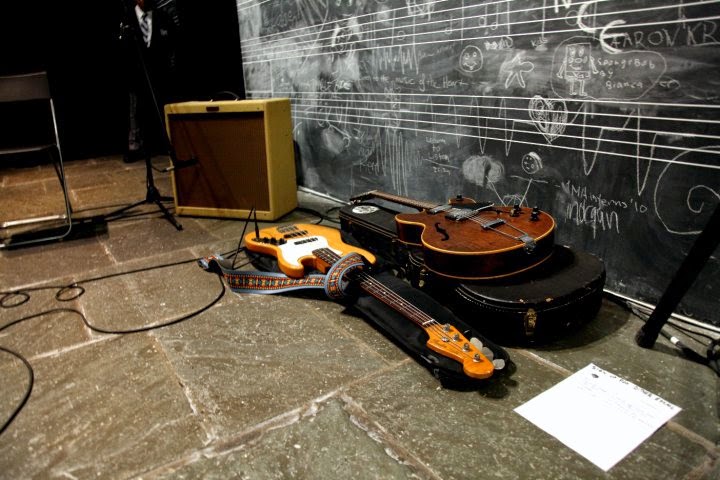