"Lonely Woman" is a jazz composition by Ornette Coleman and Jim Gardner. Coleman's recording of it was the opening track on his 1959 Atlantic Records album The Shape of Jazz to Come. Alongside Coleman's alto saxophone, the recording featured Don Cherry on cornet, Charlie Haden on double bass and Billy Higgins on drums.

In an interview with Jacques Derrida, Coleman spoke of the origin of the composition:
"Before becoming known as a musician, when I worked in a big department store, one day, during my lunch break, I came across a gallery where someone had painted a very rich white woman who had absolutely everything that you could desire in life, and she had the most solitary expression in the world. I had never been confronted with such solitude, and when I got back home, I wrote a piece that I called 'Lonely Woman.'"

The Shape of Jazz to Come

1959 was a notably productive year for Coleman. His last release on Contemporary was Tomorrow Is the Question!, a quartet album, with Shelly Manne on drums, and excluding the piano, which he would not use again until the 1990s. Next Coleman brought double bassist Charlie Haden – one of a handful of his most important collaborators – into a regular group with Cherry and Higgins. (All four had played with Paul Bley the previous year.) He signed a multi-album contract with Atlantic Records who released The Shape of Jazz to Come in 1959. It was, according to critic Steve Huey, "a watershed event in the genesis of avant-garde jazz, profoundly steering its future course and throwing down a gauntlet that some still haven't come to grips with."While definitely – if somewhat loosely – blues-based and often quite melodic, the album's compositions were considered at that time harmonically unusual and unstructured. Some musicians and critics saw Coleman as an iconoclast; others, including conductor Leonard Bernstein and composer Virgil Thomson regarded him as a genius and an innovator.

Coleman's quartet received a lengthy – and sometimes controversial – engagement at New York City's famed Five Spot jazz club. Such notable figures as the Modern Jazz Quartet, Leonard Bernstein and Lionel Hampton were favorably impressed, and offered encouragement. (Hampton was so impressed he reportedly asked to perform with the quartet; Bernstein later helped Haden obtain a composition grant from the John Simon Guggenheim Memorial Foundation.) Opinion was, however, divided. Trumpeter Miles Davis famously declared Coleman was "all screwed up inside",[10] although Davis later recanted this comment and became a proponent of Coleman's musical innovations. Roy Eldridge stated, "I'd listened to him all kinds of ways. I listened to him high and I listened to him cold sober. I even played with him. I think he's jiving baby."


Coleman's unique early sound was due in part to his use of a plastic saxophone. He had first bought a plastic horn in Los Angeles in 1954 because he was unable to afford a metal saxophone, though he didn't like the sound of the plastic instrument at first. Coleman later claimed that it sounded drier, without the pinging sound of metal. In later years, he played a metal saxophone.

On the Atlantic recordings, Coleman's sidemen in the quartet are Cherry on cornet or pocket trumpet, Haden, Scott LaFaro, and then Jimmy Garrison on bass, and Higgins or his replacement Ed Blackwell on drums. The complete released recordings for the label were collected on the box set Beauty Is a Rare Thing.

Coleman continued to push himself into unusual playing situations, often with much younger musicians or musicians from radically different musical cultures. An increasing number of his compositions, while not ubiquitous, have become minor jazz standards, including "Lonely Woman", "Peace", "Turnaround", "When Will the Blues Leave?", "The Blessing", "Law Years", "What Reason Could I Give" and "I've Waited All My Life". He has influenced virtually every saxophonist of a modern disposition, and nearly every such jazz musician, of the generation that followed him. His songs have proven endlessly malleable: pianists such as Paul Bley and Paul Plimley have managed to turn them to their purposes; John Zorn recorded Spy vs Spy (1989), an album of extremely loud, fast, and abrupt versions of Coleman songs. Finnish jazz singer Carola covered Coleman's "Lonely Woman" and there have even been progressive bluegrass versions of Coleman tunes (by Richard Greene).

“Ornette Coleman and Don Cherry & Billy Higgins and I were lucky enough to have met at the same time as we were feeling the same way about music and that feeling was to play music as if we were hearing it for the first time and creating a new chord structure as we improvised…playing with Ornette was a learning experience, definitely. I had to really listen to everything that he played because he was always modulating from one key to another and I was the only chordal instrument in the band. There was no piano or guitar playing chords and so I had to play chords in my basslines and learn how to create new chord structures. It was a great band.” – Charlie Haden

Ornette Coleman’s Atlantic debut, The Shape of Jazz to Come, was a watershed event in the genesis of avant-garde jazz, profoundly steering its future course and throwing down a gauntlet that some still haven’t come to grips with. The record shattered traditional concepts of harmony in jazz, getting rid of not only the piano player but the whole idea of concretely outlined chord changes. The pieces here follow almost no predetermined harmonic structure, which allows Coleman and partner Don Cherry an unprecedented freedom to take the melodies of their solo lines wherever they felt like going in the moment, regardless of what the piece’s tonal center had seemed to be. Plus, this was the first time Coleman recorded with a rhythm section — bassist Charlie Haden and drummer Billy Higgins — that was loose and open-eared enough to follow his already controversial conception. Any understanding of jazz’s avant-garde should begin here. (AllMusic.com) 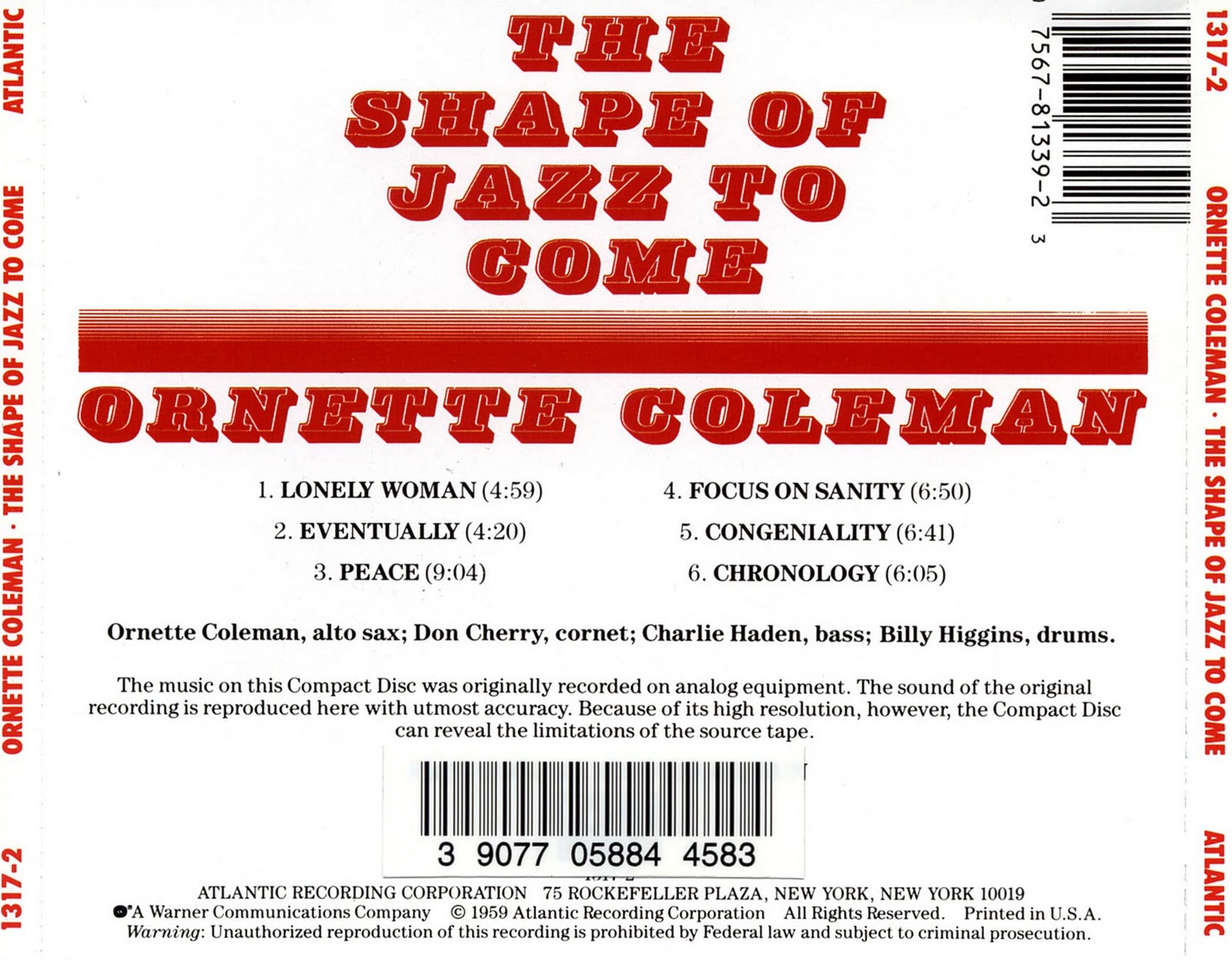 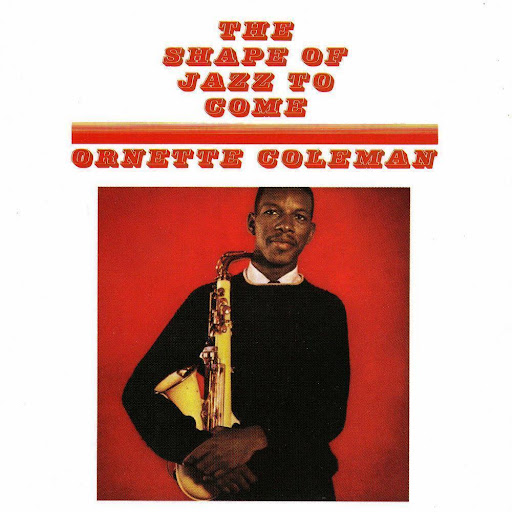 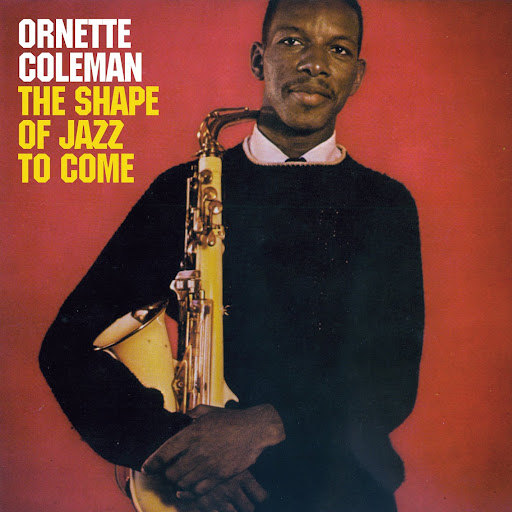 I  believe that what Ornette Coleman is playing will affect the whole character of jazz music profoundly and pervasively, but I am not unique or original in believing that what he is doing is new and authentic. for two examples, percy heath, bassist with the modern jazz quartet, has been praising him for over two years, often to deaf ears. "when i first heard Ornette and Don Cherry, I asked, "what are they doing", but almost immediately it hit me. It was like hearing Charlie Parker the first time: it's exciting and different, and then you realize it's a really new approach and it makes a really valid music." and John Lewis, pianist and musical director of the quartet said last winter after hearing him, "Ornette Coleman is doing the only really new thing in jazz since the innovations in the mid-forties of Dizzy Gillespie, Charlie Parker, and those of Thelonious Monk." What Ornette Coleman plays can be very beautiful and it can have that rare quality of reaching out and touching each member of an audience individually. his melodies are unusual, but they have none of the harshness of self-conscious "experimental" borrowings.

When we hear him he creates for our ears, hearts, and minds a new sensibility. It is probably impossible for Ornette Coleman to discuss music without sooner or later using the word love and he has said, with the innate modesty with which he seems to say everything, "music is for our feelings. i think jazz should try to express more kinds of feeling than it has up to now. he knows well, then, the source and reason for his music. He also knows that he does not "own" it himself, nor "invent" it, but is responsible to something given to him. as is so necessary with an innovator in the beginning, he is not afraid to play whatever his muse tells him to play: "I don't know how it's going to sound before I play it any more than anybody else does, so how can we talk about it before I play it." What he has done is, like all valid innovations, basically simple, authentic, and inevitable, but we see that only once someone of a sublime stubbornness like coleman's does it. the basis of it is this: if you put a conventional chord under my note, you limit the number of choices i have for my next note; if you do not, my melody may move freely in a far greater choice of directions. as he says of his improvising, "for me, if i am just going to use the changes themselves, i might as well write our what i am going to play."