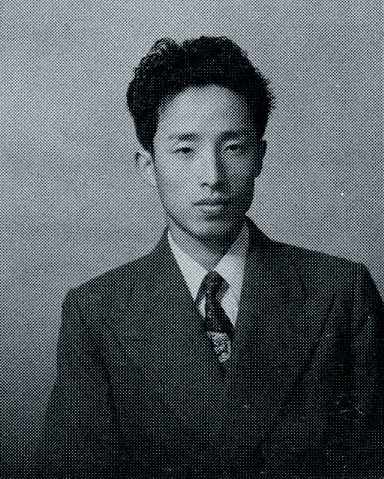 Nam June Paik is a major contemporary artist and a seminal figure in video art. His video sculptures, installations, performances and single-channel videos encompass one of the most influential and significant bodies of work in the medium. 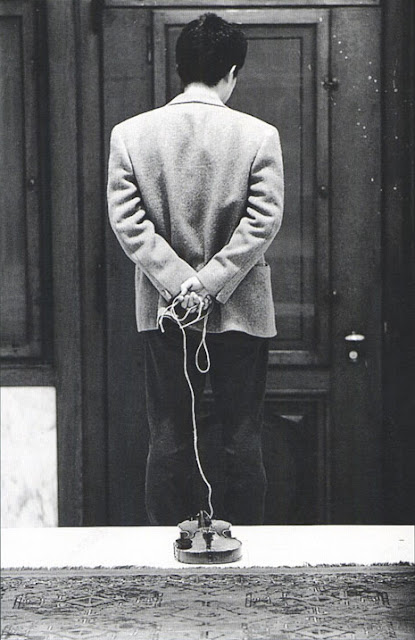 From his Fluxus-based performances and altered television sets of the early 1960s, to his ground-breaking videotapes and multi-media installations of the 1970s, '80s and '90s, Paik has made an enormous contribution to the history and development of video as an art form. Exercising radical art-making strategies with irreverent humor, he deconstructs and demystifies the language, content and technology of television. Merging global communications theories with an antic Pop sensibility, his iconoclastic works explore the juncture of art and popular culture. 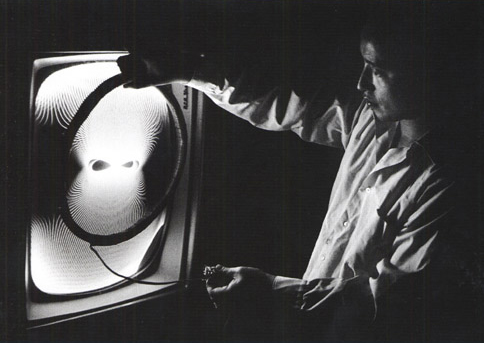 In the 1970s, Paik began a series of tapes, including Global Groove (1973), that were extraordinarily influential and innovative. Applying surreal conceptual wit and "neo-Dada" irony, he established a radical syntax of video based on the visual and aural grammar of television, appropriating and then derailing its very language. Densely layered with witty intertextual references and transcultural content, his exuberant, disjunctive collages function as a stream-of-consciousness flow of images, music and electronic effects. 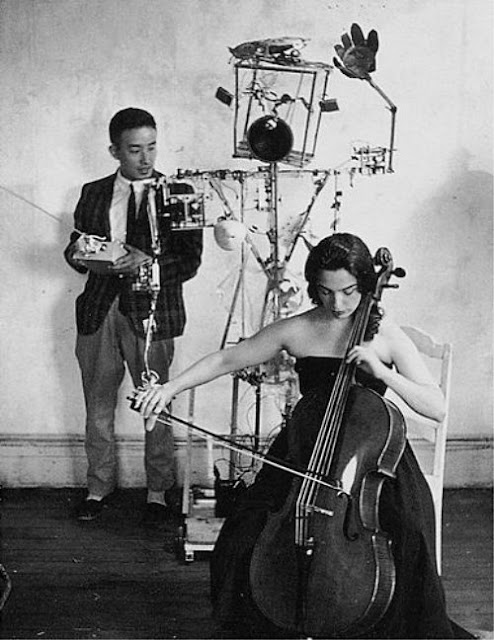 Paik engages in kinetic cultural explorations as a form of global communications, as if he were switching television channels around the world. In vibrantly textured audio and visual pastiches, his emblematic motifs of Pop iconography, international avant-garde figures, multicultural performances and media appropriations are subjected to a disruptive barrage of exquisite electronic techniques — hyperbolic fragmentations, alterations and juxtapositions. 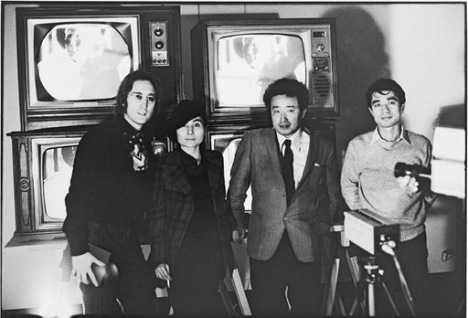 Paik's early works display the signature image manipulations and colorizations of the Paik/Abe Synthesizer, a device he developed in 1969 with electronics engineer Shuya Abe. Paik's experiments with the Paik/Abe Synthesizer helped to revolutionize the technological grammar of the medium. The richly layered and textured alterations of his later works exhibit the tour-de-force imaging techniques of longtime collaborator Paul Garrin. Images multiply and divide within the frame; temporal and spatial shifts proliferate, visuals and sound are juxtaposed in ironic contexts. Paik's tapes often take the form of collaborations with or tributes to the avant-garde artists who were his friends and colleagues, including John Cage (A Tribute to John Cage, 1973), Merce Cunningham (Merce by Merce by Paik, 1978), Allen Ginsberg and Allan Kaprow (Allan 'n' Allen's Complaint, 1982), Julien Beck and Judith Malina (Living with the Living Theatre, 1989) and (MAJORCA-fantasia, 1989). 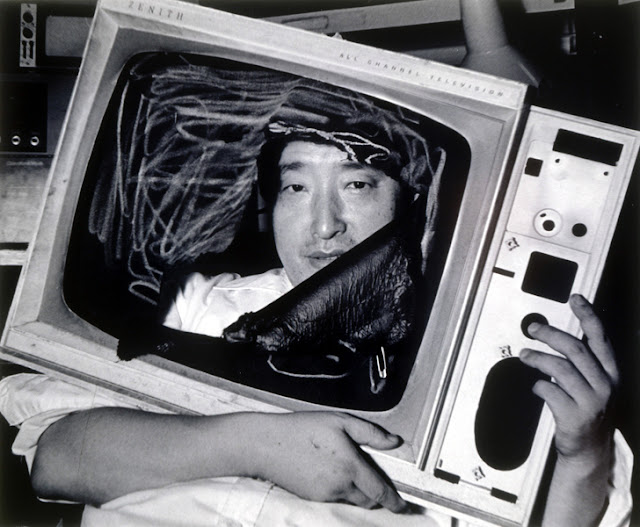 Paik began working in music and performance while a student in Germany, where he participated in the international Fluxus movement. His European Fluxus performances, actions and events included "prepared" pianos and musical instruments, and later, altered television sets. In Germany, Paik collaborated with such artists as Wolf Vostell and Joseph Beuys, and met avant-garde composer John Cage, whose ideas and art had a tremendous influence on his work. In 1964, Paik came to New York, where his "discovery" of the Sony Portapak and video art has become one of video's most enduring, if apocryphal, legends. (According to this tale, Paik bought one of the first Sony Portapaks to be manufactured for the consumer market. He made his first tape the same day, recording Pope Paul VI's visit to New York from a cab window; the tape was then exhibited at the Cafe a Go Go.) 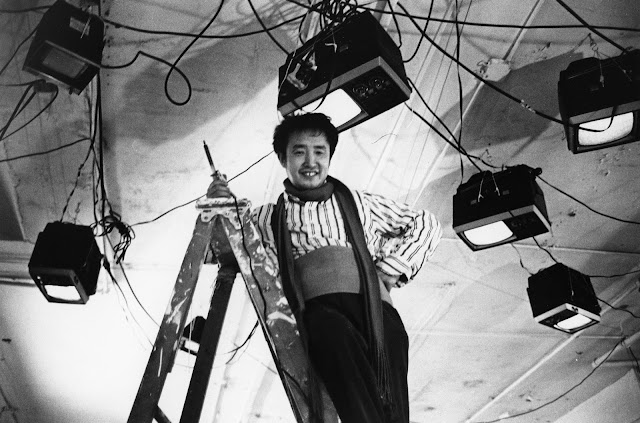 In New York, Paik began a longtime collaboration with avant-garde cellist Charlotte Moorman, with whom he produced a series of important performance-based works. Among their most notorious pieces are the Opera Sextronique (1967), the TV Bra for Living Sculpture (1969), and TV Cello (1971). Paik is perhaps most widely recognized for his prodigious body of video installations and sculptures, from the landmark works of the 1970s, including TV Buddha (1974), TV Garden (1974-78), and Fish Flies on Sky (1975), to the 1986 Family of Robot and the 1995 Megatron. 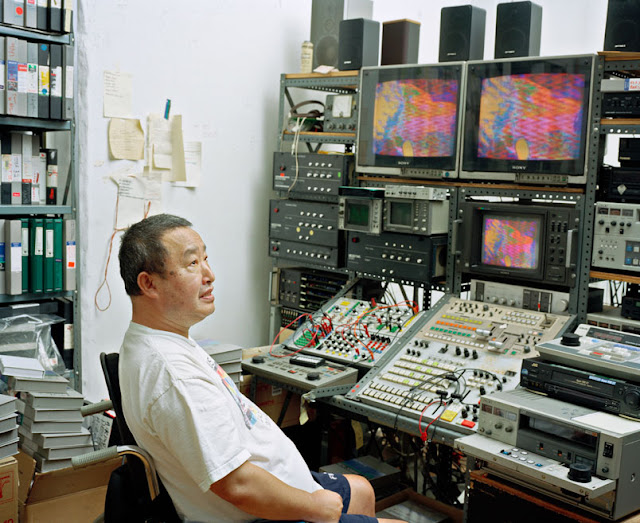 Paik's experiments with satellite technology began in 1977 at Documenta 6 in Kassel, Germany, where he collaborated on a live telecast with Joseph Beuys and Douglas Davis. His "live" international satellite broadcasts of the 1980s, including Good Morning Mr. Orwell (1984), Bye Bye Kipling (1986), and Wrap Around the the World (1988), are global video installations that conjoin disparate spatial, contextual and temporal elements. 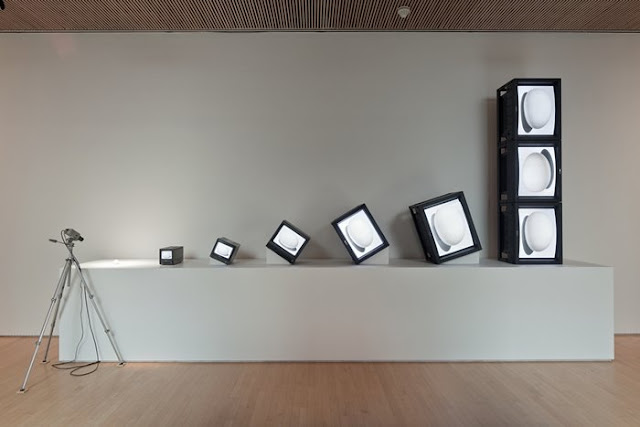 Linking the artworld and the media, pop culture and the avant-garde, technology and philosophy, Paik's works resonate with an irreverent humor and subversive brilliance that have influenced contemporary art, video and television. 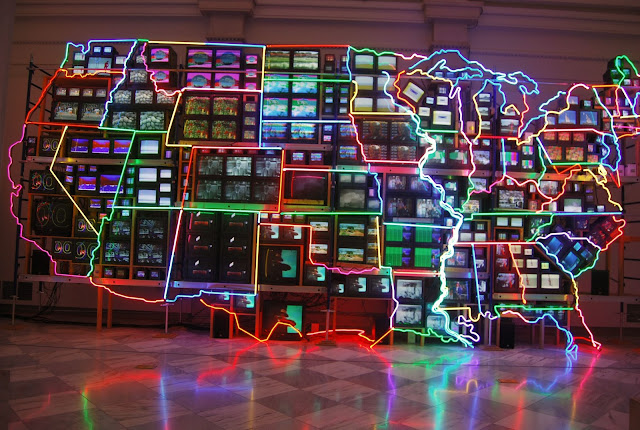 Paik was born in Seoul, Korea in 1932, and died in 2006. He studied music and art history at the University of Tokyo, producing a thesis on Arnold Schoenberg, and graduated in 1956 with a degree in aesthetics. Paik's studies continued in Germany at the Universities of Munich and Cologne, and the Conservatory of Music in Freiburg. From 1958-63, Paik worked with Karlheinz Stockhausen at the WDR Studio fur elektronsiche Musik in Cologne. After meeting Fluxus founder George Maciunas in 1961, he participated in numerous European Fluxus performances, actions and events. 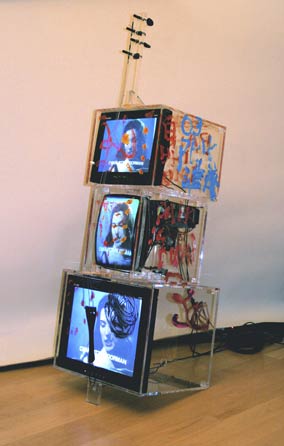 Paik's first one-man exhibition was the 1963 Exposition of Electronic Music — Electronic Television at the Galerie Parnass in Wuppertal, Germany. Paik came to New York in 1964; his first one-person exhibition in New York was at the Bonino Gallery in 1966. In 1969, Paik participated in the landmark exhibition TV as a Creative Medium at the Howard Wise Gallery in New York. Also in 1969, Paik and electronics engineer Shuya Abe created the Paik/Abe Synthesizer at the New Television Workshop at WGBH in Boston. Many of his tapes were produced in the 1970s while he was artist-in-residence at the Television Laboratory at WNET/Thirteen in New York. Since 1979, he has taught at Staatlichen Kunstakademie in Dusseldorf, Germany. 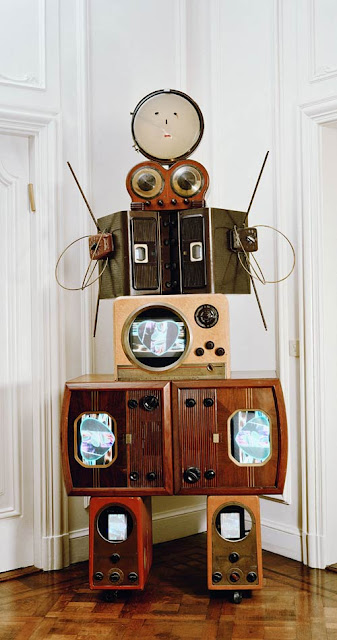 Paik is the recipient of numerous awards, including a Rockefeller Foundation grant, the American Film Institute's Maya Deren Award for Independent Film and Video, The New York State Governor's Art Award, and The New York City Mayor's Award to Distinguished Immigrants. He won 1st Prize/Best Pavilion at the 1993 Venice Biennale for Artist as Nomad in the German Pavilion. In 1998 he was honored with the prestigious Kyoto Award in Japan, and in 1999 he was named among "The Century's 25 Most Influential Artists" by ARTnews. He was given the National Arts Club Artists Award in 2000. 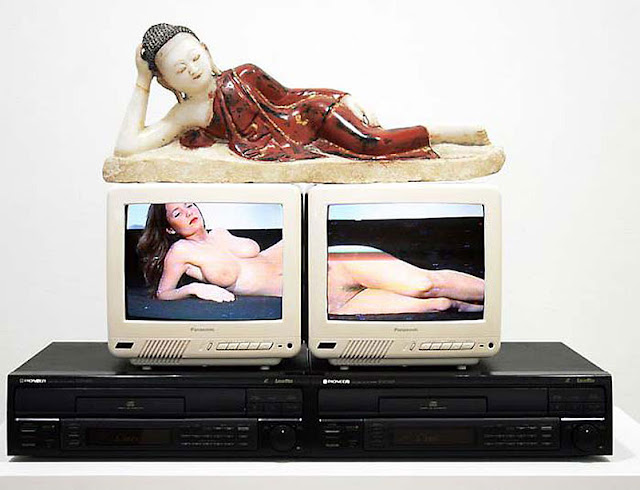 Paik's works have been the subject of numerous exhibitions, including his first United States retrospective at the Everson Museum, Syracuse, in 1974, and a 1976 retrospective at the Kolnischer Kunstverein, Cologne. In 1982, the Whitney Museum of American Art in New York honored him with a comprehensive retrospective of videotapes, video sculptures, installations and performances, which traveled to the Museum of Contemporary Art in Chicago. 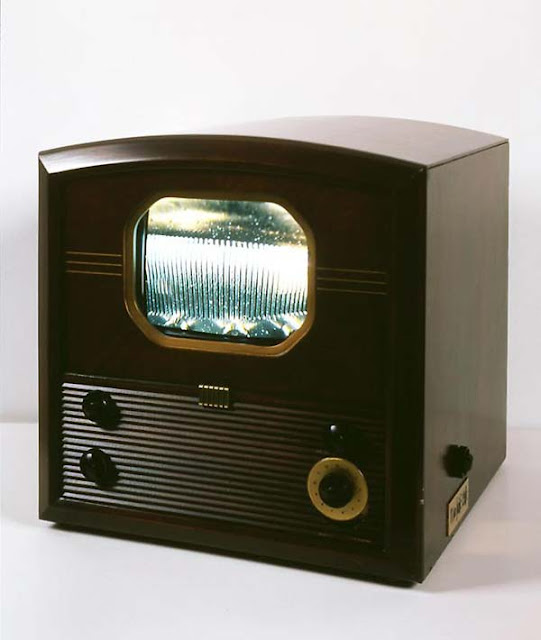 In recent years, his installations have been widely exhibited internationally, including one-man shows at institutions including Tokyo Metropolitan Art Museum; Centre Georges Pompidou, Paris; and Holly Solomon Gallery, New York, among many others. His work has also been seen in group shows at festivals and institutions including the Whitney Museum of American Art Biennial, New York; Documentas 6 and 8, Kassel, Germany; Japan Society, New York; San Francisco Museum of Modern Art; and Video Sculpture, DuMont Kunsthalle, Cologne. In 1988 he was the subject of a retrospective at the Hayward Gallery in London. His live, international satellite extravaganzas have been broadcast around the world. 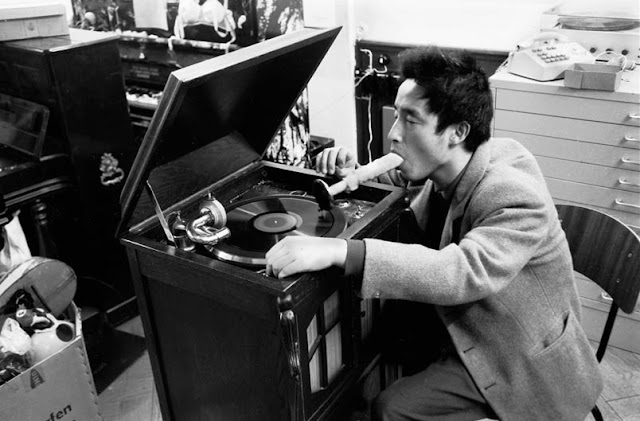 Together with the electronics expert Shuya Abe, Paik developed between 1969 and 1970 a video synthesizer allowing the colours and shapes from different images to be mixed and manipulated. Paik saw in this innovation a major step making video an artistic medium: "This will enable us to shape the TV screen canvas as precisely as Leonardo, as freely as Picasso, as colorfully as Renoir, as profoundly as Mondrian, as violently as Pollock and as lyrically as Jasper Johns ' Posterity was not the immediate concern, however, the instrument being intended for use in live performances with a function comparable to the audio synthesizer’s for concerts. According to Paik, the video synthesizer had 'to be played in real time – like a piano. From a purely artistic viewpoint that is highly interesting – a truly new thing that has no precedent. You simply play and then see the effect.'
The video synthesizer was first used in the four-hour live broadcast 'Video Commune' transmitted by WGBH in 1970. Pictures mixed live from completed videotapes and camera images were shown to the accompaniment of Beatles music. The studio crew was joined by passers-by Paik invited into the studio from the street.