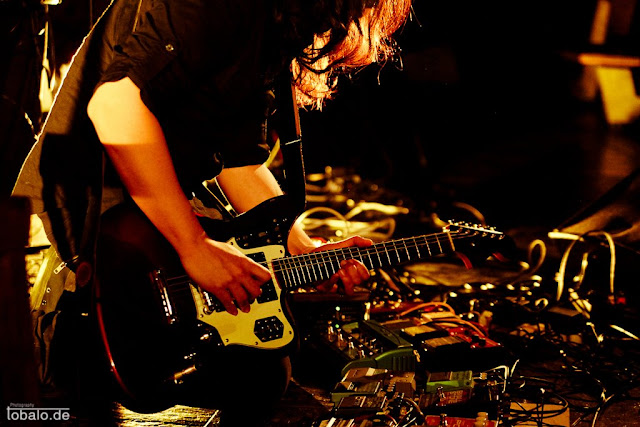 thisquietarmy is a solitary one-man experimental drone-based music project of Eric Quach from Montreal, Canada. Active since 2005, he constantly furthers the boundaries of his sonic guitar experimentation to create an impressively wide range of dynamic soundscapes by combining textural & structural elements of ambient/electronic, drone/noise, shoegaze/industrial, post-punk/krautrock, black/doom metal. His live performances, often presented as an improvised real-time score to his own hypnotic ethereal visuals, can be as heavy and face melting as quiet and introspective. 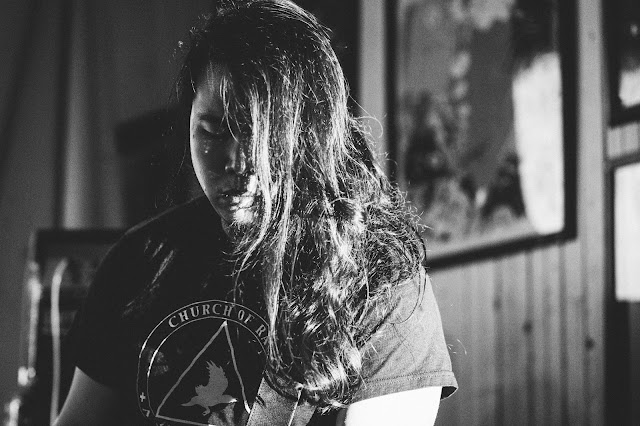 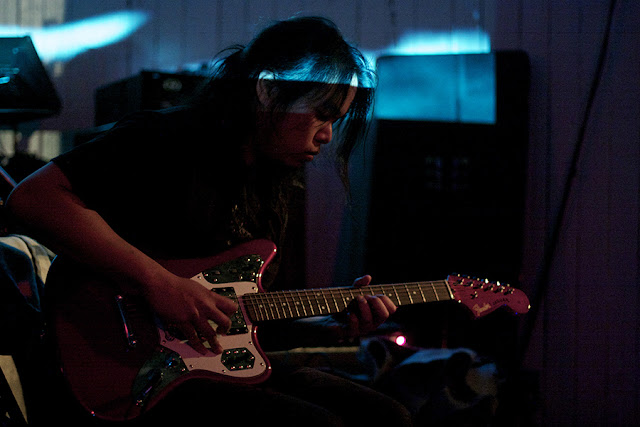 With such a prolific body of work and 350+ live performances in 30+ countries in North/South America, Europe & Asia, including appearances at esteemed festivals such as Incubate Festival (Netherlands), Dunk! Festival (Belgium), Amplifest (Portugal), Denovali (Germany), Suoni Per Il Popolo (Canada), Zemlika (Latvia) - thisquietarmy is a pioneer of the experimental music scene emerging from Canada. 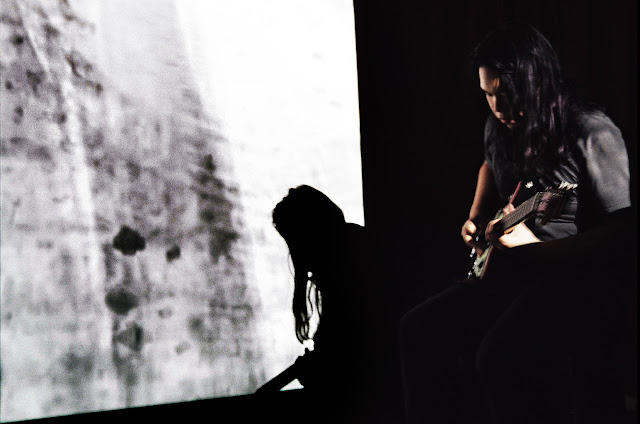 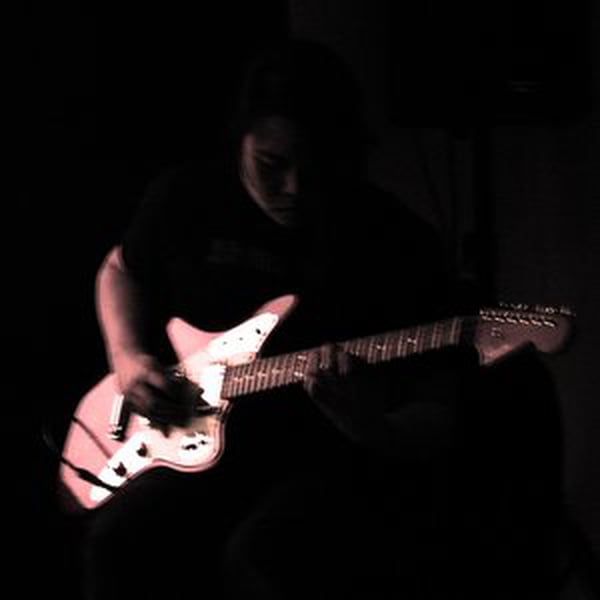 The first one from thisquietarmy, "Wintersleeper" EP, now 10 years old. At that time, I was still in an instrumental band called Destroyalldreamers, but I was just experimenting alone in the studio during cold winter nights. Recently, I dug out the files with the intention to remix & remaster them for a 10th anniversary release but I haven't been able to because I don't really understand how I created those tracks & textures - sure, with improvisation and loop samples - but it's just the way I recorded and put them together that still boggles me. In a way, they sort of created the musical template for thisquietarmy - yet it's not true since I haven't really worked or recorded the same way after that. Those tracks are still among my favorite.

It's pretty relevant if you want to be a good musician, but not so much if you are an artist who is simply using a tool to express himself.

One that listens, and one that doesn't.

Saturation & imitation. There's a lot of the same stuff out there, some good and some bad, and it's hard to filter and go through all of them as everyone is releasing something either through the internet or through new labels that pop up here and there. On the other hand, you have every opportunity to do it and every tool available which means that you also have no excuses not to do it: play music.

It's my main voice, my main creative vehicle and my main medium of expression. I will play & create until no one listens anymore, or until I don't have anything new to say with that medium anymore. Once, Dave Bryant told me that "playing music is just something you do to keep you from putting a bullet in your head" and I wholeheartedly agree.

Back in the late 90's or in 2000 - seeing the 9 members of Godspeed You Black Emperor! sitting down to play their instruments in the dark, non-stop for 3 hours made me realize that you don't need to be an extroverted, loud, agitated person to perform or play an instrument.

At first, I would experiment with a multi-effect pedal, learning about each type of effects and program individual patches for different sounds, before eventually buying separate boxes to combine together. To this day, I still don't think I know how to play guitar, but I definitely know how to create sounds by combining pedals in different ways, tweak knobs and learn how to use each of their parameters and use them in relation to one another.

Before starting to play music, I was painting and drawing a lot. The medium has changed but the process essentially remains the same: silence is the blank canvas, the guitar is the brush and the palette of colors are the effect pedals and the paint textures are the layers of sound.

I studied in mechanical engineering and have worked in that field for over 10 years. As an engineer, I learned how to analyze, rationalize and organize my creative process and find solutions within that medium as to what I want to express and create as a work. I've experienced first-hand the benefits and the fall outs of technology within society and community affects the sociological, political and economical aspects of the aftermath, the good and the evil of it all. 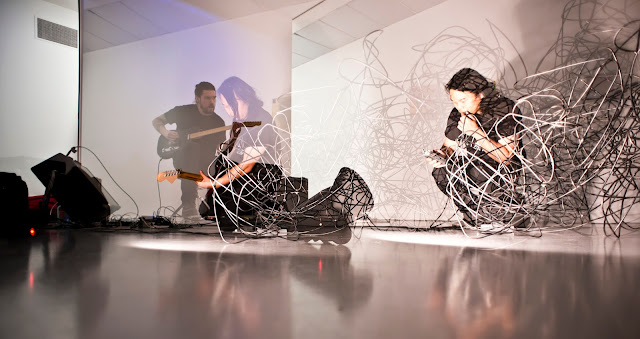 As a Canadian-born visible minority in the part of the country that constantly wants to separate from the rest for cultural & identity reasons, a lot of complicated conflicts and issues have bled through within the search of my own identity, which furthers the subject of alienation and the difficulty to relate to people. And lastly, as usual - people & relationships play an influence - as a solitary one-man army, the constant dilemma and contradiction between the fear of loss and the freedom of the lonely. The general expressive result, whether intentionally or not, is an atmospheric and apocalyptic feel in my sonic guitar landscapes - a mix of sad, bleak and sometimes angry, yet hopeful and beautiful dream-like sound is what comes out of this collision between both the artistic world and the foundation of our material world, as well my personal roots and identity.

A feeling that you can't get rid off - whether a good or a bad one. As long as a reaction comes out of you, it means that the work is strong enough to make you feel something and by the same token, also gives you hope that that you're not dead yet.

"What musical career?" I was studying engineering (a very different path) and didn't even play any instrument back then. I am still surprised about what I'm currently doing for a living - I don't think anyone could've predicted it, but it's mostly the result of odd choices, dubious paths and unfortunate circumstances. That being said, it may not be forever, so I'm doing my best to enjoy the ride for the time being.

I usually use a Fender Jaguar guitar, Japanese-made with humbuckers (although lately, for logistical reasons, I am not always in possession of it). I run it through a variety of 12-15 pedals/effect processors such as fuzz, delays, pitch shifters, phasers, tremolo, reverb & loop samplers. Mostly, the textures I create on the loop samplers are what define my sound - on top of that, I superpose different layers of sampling in parallel as to generate even more complex and random patterns, either within a structured sequence or not - depending on the level of abstraction I want to create to express a certain state of mind. Sometimes, I use a Moog MG-1 synthesizer but not very often, as well as a sequencer software for drum programming & creating samples from various sources.

Currently, I am in my home studio in Montreal (although these days, it's really just a laptop and a sound card), listening (playback) and editing hours of improvised works from a session - trying to make sense of all that, organizing the files, cutting the most interesting parts as to either use it as a basis of a new idea or to leave it as its own track. My works are usually comprised of experimental improvisations or intentioned & thought-through structured pieces, or a combination of both. Sometimes a piece of music already has a life of its own and can immediately be released, others need more time to be completed and pieced together with other elements, sometimes external ones. Regardless, this work should be released in 2016.

I'm also preparing my 10th European tour this fall - still in support of my latest album "Anthems for Carthasis" co-released last spring by thisquietarmy Records (Canada) & Consouling Sounds (Belgium). Consouling is also re-issuing "Reveries", my collaboration with Noveller, this fall. There will be some thisquietarmy gigs in Spain (Oct. 1-4), Germany (Oct. 7-11), Poland (Oct. 20-24) as well as Belgium, Netherlands, Poland, Bulgaria, Romania, Greece & Italy which are planned for November. As I take care of booking and logistics myself, it sadly takes a lot of my creative time away but I'm always grateful to be able to travel and perform for people in different parts of the world. 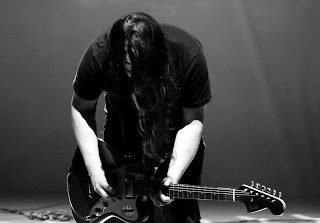 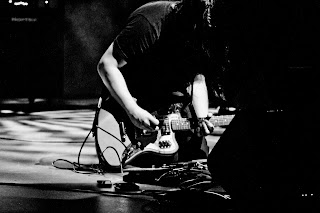