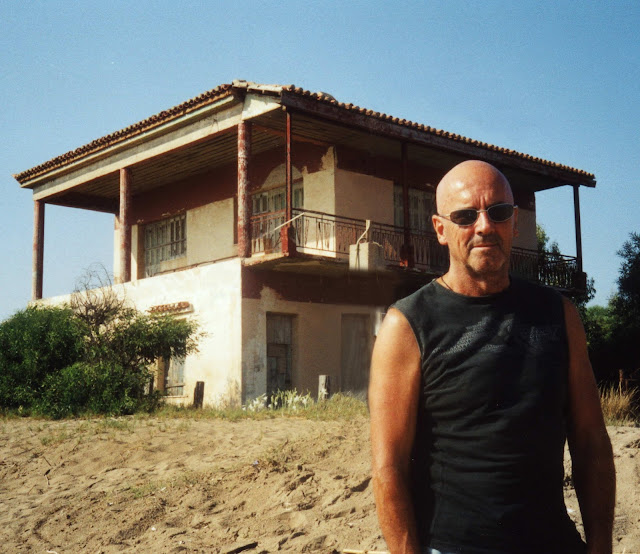 Graham Peter Hall, generally known as GP Hall (born 15 July 1943, Hampton Hill, London, UK) is an English guitarist, composer and improviser fusing and mixing both traditional and avant-garde styles. He is also known for having created the Industrial Sound Sculptures, sonic compositions performed on a variety of electric and acoustic guitars and a six-string bass, played with various techniques and implements (including slides, battery fans and razors, toys, Velcro and crocodile clips), which are fed through sound processors to create a widescreen sonic environment. However odd the sounds and devices used, the sound-sculpture approach is romantic and visual. Based on human experience and natural phenomena, it mixes elements of avant-garde, ambient, industrial music and dream pop along with my more traditional influences. 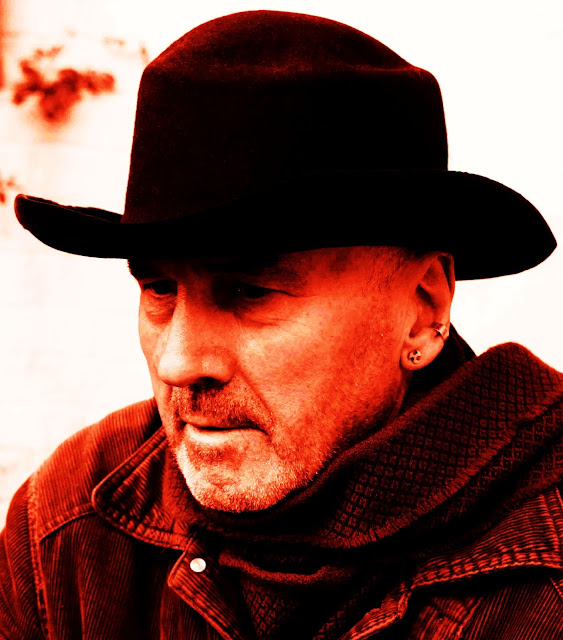 Hall's music draws on classical, rock, jazz, flamenco, folk and blues styles as well as free music, electronic noise and "found" instrumentation. He uses slide and fingerpicking techniques but also plays (or prepares) his guitars with various found implements such as crocodile clips, palette knives, velcro strips, an antique psaltery bow, wind-up toy cars and others in order to create a variety of different sounds and attacks. Hall uses a variety of treatments and electronic effects pedals to further process his guitar output, and sometimes incorporates radio broadcasts into his ensemble sound.
Hall has worked with (among others) Lol Coxhill, Paul Rutherford, Jeff Clyne, John Ellis (Stranglers) and Lyn Dobson, and he has had the pleasure of playing alongside John Lee Hooker and Sonny Boy Williamsonm and share recordings with Frank Zappa, John Zorn, Robert Fripp & Bill Frisell.


‘I realise I may have committed the ultimate sin as far as the classical boys are concerned, writing a symphony and guitar concerto, plus coming from a working-class background in London. I have always been a maverick outsider all my life, so it’s a little bit late to start worrying about what people think.' 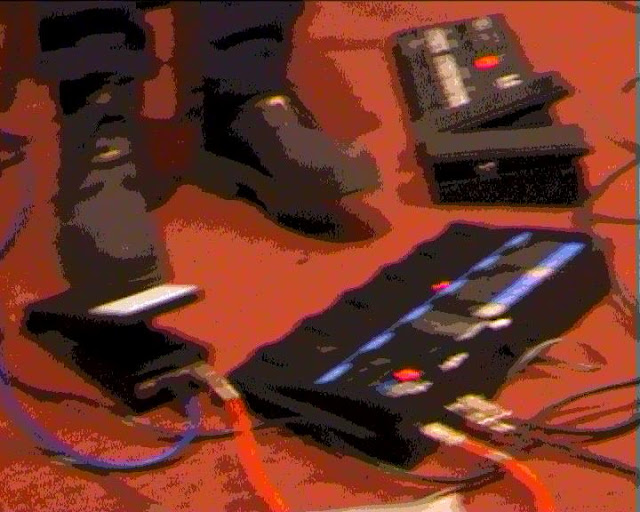 As a player, GP Hall  emerged in the British blues boom in the 1960s and then followed a long and winding path through various scenes and cultures. He studied with the Romani flamenco master Manitas de Plata in Spain and toured Europe with Liverpool band Casey Jones & the Governors. I was commissioned three times (twice by The Arts Council of Great Britain) for original music, and played in the British avant-garde scene of the 1970s (as an improviser, a pioneer of electric flamenco, and a composer of ambitious large-scale ensemble pieces). During the 1980’s he worked on soundtrack music, and in the 1990s he reinvented himself as a solo performer.

Which work of your own are you most surprised by.

I have found that besides inventing the genre “Industrial Sound-Sculptures” in the early 1970’s, where I place battery shavers & other industrial objects onto the pickups of my electric guitar (e.g. Enigmatic on the album Mar del Plata played in real time with no overdubs),

I always wanted to write a symphony and a guitar concerto, I was able to do this with a Roland MC-909. Basically this machine is used by the Hip-Hop guys, and being amongst other things dyslexic I found that the way my brain was wired up I could do this, using the 909 to achieve these aims. I also added Industrial noise to beautiful string chords. This resulted in my CD Embarkation.

What’s the relevance of technique in music in my opinion?

I find that playing what I call Sonic Flamenco (it is not Flamenco in the traditional sense but using some of the techniques plus some of my own to make it a full on at times orchestral sound) this involved learning some of these techniques adding a few of my own & tuning my flamenco guitar to D-B-D-F-A-D, I find all the skill is in the right hand to make it sound sonic. Examples of the use of these techniques can be heard on my CD “Pyroclastic Flow” especially in the track called by that name.


When using my 6-string bass tuned to normal guitar tuning (except an octave down), and bowing the outer 1st string with industrial objects especially Braum battery shavers and battery fans + crocodile clips onto the strings and flicking them to produce a motorized sounds like a dozen B52 bombers taking of in a swarm of crickets. Basically I have to invent my own techniques, I have always been an outsider and a lone wolf, yes technique is important, but also so is letting go.

Why do I need music? Can I live without music?

Music is an expression of the soul, it’s a great way to express what is hard to verbalize. It has been hard, going my own way, but in the long run it is best. All around us is Pop, elevator tunes and supermarket music, all designed to keep us controlled and unaware. I find this type of music almost makes me ill. It pervades humanity, it is everywhere. So I find when I connect up with someone who is playing from their soul it gives me hope. Music some days I could live without it, but it would be like a soundless desert island, there is a lot of beauty out there you just have to dig under the layer of dross. It takes courage to be original.

Tell me one impossible project you would like realised

I would like to find the funds to pay an orchestra to play live my “Trinity” symphony and also my guitar concerto “Phoenix” which would include me playing guitar & industrial sound-sculptures. I would also like to get another orchestral/industrial project called “Spatial awareness” published. I did not go to music school, I come from the school of thought that if it sound right it probably is… I don’t do highbrow.

What are the challenges and benefits of today’s digital music scene.

The challenges are huge, it is after all the future, it enables people like myself not to be tied to major record labels (my last one was with Bronze Records who were big in their day)

I find Bandcamp a blessing.

But I find that for me it’s hard to get doing all this, when I find using a computer pretty miserable. I feel all alone in my inadequate approach to a PC. Most of the time I am trying to fix things that have crashed, it’s going to be a sad thing if the person with the best PC awareness in the music scene gets noticed, and the one who is not so PC savvy gets left behind. I have enough tools to study and use when playing or recording that I can’t find the energy to go online.

One of the many bonuses of the digital age is we no longer have to rely on recording studios so much although I have to say when I was recording a while back I left the play/record button on for nearly 5 hours. I wanted to chop a lot of the blank space out but this I have been unable to do. When it was analogue and reel to reel I just needed to mark it with chalk where the cut was needed, cut with a razor blade and join it together, simple, but where is the simple instruction book… oh dear I am rambling..

As I am such a perfectionist, this is hard to do, it may take a few years before I can play my recordings, usually the struggle is for a nice reverb, digital is too hard, I like a soft warm sound, I got out some reel to reel master tapes a while back and played them through a Revox wow did they sound good. What’s best, analogue or digital? Answer use both.!!

What special or extrange techniques do you use.

You would have to see them as well as hear them to understand. I believe they are unique. Most times that is a joy but sometimes it’s a drag, especially trying to find the right strings, FX etc and as I rely on the use of my finger nails on my right hand this presents problems when they break.

Can you describe a sound experience that you believed contributed to you becoming a musician?

Lots of classical music and opera plus the opening chords to “wake up little Susie” by the Everly bros, the guitar solo on “Shaking all Over” by Johnny Kidd & the Pirates and a guitarist called Vic Triggle who had a band called the “Strollers”. He was playing “Sleepwalk” by Santo & Johnny. He was fantastic. Also the guitar solo in “Green Onions by Booker T & the MG’s.

I miss all those instrumental bands from that period. I can freely improvise but I don’t go with the idea that one must steer clear of any melody or normal tones, my Industrial sound-sculptures work best with a minor chord swell especially an adagio behind it, then add the industrial sound on top of it. Listen to Enigmatic from Mar-Del-Plata track 10 recorded in 1985 and The Estates, also on this CD recorded in 1975, using percussion and solo piano frames. 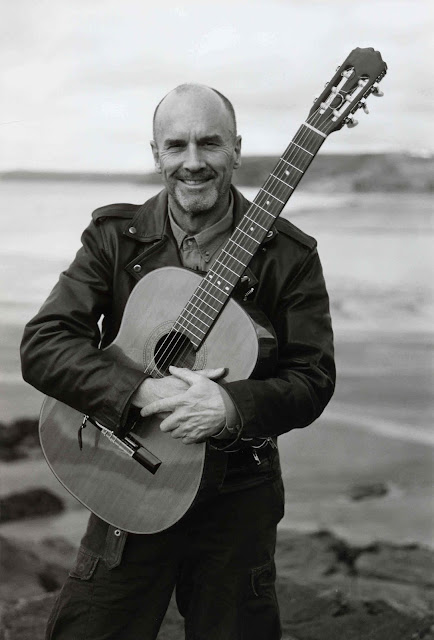 The guitarists I admire still today are the late Hans Reichel ... Uwe Kropinski... and Manitas de Plata. I also admire a Band called The Enid for there dramatic powerful sonic instrumental sound, and there principles in life... They left a big impact in me, they are still going, after many years of being like myself... outsiders!

Tell one musical work which has provoked a change in your music.

For me it was The Estates, written in 1973 and published in 1975. It was the first Industrial Sound Sculpture. In 1975 using industrial sounds (especially in film music) was unheard of, now it’s the norm and I can’t get a look in. On a spiritual note natural sounds such as the birds in the trees, dawn chorus, the sound of waves on a beach, corn blowing in a ripe cornfield. Real music!!! Visually the sunset on an industrial rusting deserted site..

What is the relationship with other art disciplines?

I paint myself, all are abstract, I was also director of one of the most Avant Gard theatre companies in UK called Engineers of The Imagination (Welfare State) I learnt a lot from them. One of my friends is a poet, words can really move me, although I find it hard to express in words my own music.

If you could, what would you say to yourself 30 years ago about your musical career?

I would say it’s a responsibility. My music is something that needs to be nourished, rested, and above all have fun with.

Melody is wonderful, offset with abstract, but it’s not just any old notes or noise, it takes skill to blend. Mike Finesilver from Pathway Studios, Islington London, showed me how to mix and blend and shape…What would I say to myself? Go easy on yourself, you have nothing to prove, if people fail to hear your message of beauty and truth, move away from them, do not try to convert the uninitiated.

What projects are you working on now & what does the future hold?

I am working on getting more online profile, but it’s also hard to promote oneself. I prefer things to come to me. In the past I have been interviewed in most National Newspapers but it’s almost impossible in today’s climate to get a reply.

I would like to play my Sonic Flamenco at some festivals so I am concentrating on trying to contact the right people.

The future for me is not to be driven so much and to keep things simple. This I am doing, just a guitar over my shoulder. I have toured for years with large amounts of equipment, I am fit for my age, but cannot hold back the advancing years. 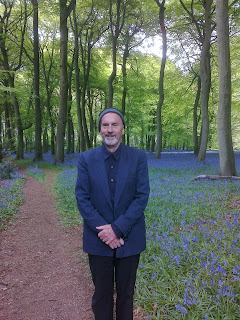 ‘We were born original – let us therefore not be copies.’
Photographies by Sue Munns 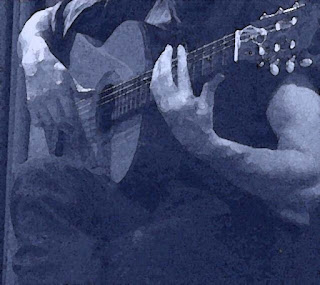