Armandinho, the Wizard of the Portuguese Guitar

At a time when the Portuguese guitar was not as technically developed as it is nowadays, there appeared a man who was responsible for introducing important innovations in playing style and technique, thereby bringing the instrument into modernity.

A true pioneer, Armando Augusto Freire, nicknamed Armandinho, will always be remembered as one of the best Portuguese guitar performers in fado history. His style is very lyrical and inventive, and his uncanny ability to improvise amazed audiences wherever he performed.

Born in Lisbon in 1891, Armandinho was drawn to the Portuguese guitar from an early age due to “the possibilities that it offered him in his longing for expressing his characteristic sentimentality” (1). 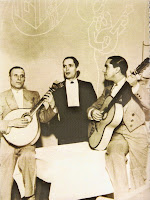 A self-taught musician, Armandinho was deeply influenced by his admired Petrolino (2), an obscure and extravagant guitarist that is said to have performed as far afield as Czarist Russia. His first public appearance took place when he was fourteen at the Teatro das Trinas, and even back then, his style was already becoming very polished, setting him apart from most of his contemporaries.

Armandinho soon became one of the most sought-after accompanists in Lisbon, and he was an integral part of many overseas tours that took him to Brazil, Argentina, and Uruguay. In the early 1930s, he toured Madeira and the Azores Islands with Martinho d’Assunção, João da Mata, and singer Ercília Costa, and he also performed in Angola and Mozambique with singers Berta Cardoso and Madalena de Melo. Throughout his career, he accompanied many great fadistas, including Amália Rodrigues in her early years as a singer.

Armandinho was not only an extraordinarily gifted musician, but he was also a very accomplished composer. Some of the tunes that he wrote, such as “Fado Armandinho,” “Ciganita,” “Fado São Miguel,” and “Fado Mayer,” have acquired the status of standards and are still widely performed today. Although his recording career was not very prolific, he did cut some sides for HMV that are now collector’s items and that allow us to appreciate his unparalleled artistry and the magic sounds that he could produce with a Portuguese guitar in his hands.

Armandinho was a man who devoted his whole life to fado and to the Portuguese guitar. After his passing in December of 1946, when he was only 55, he became a legend, a classic, a performer to whom virtually every Portuguese guitarist is indebted. Some of his many followers include such magnificent musicians as Jaime Santos, Raúl Nery, and José Nunes. In his very nostalgic, autobiographic fado “Belos Tempos” (“Good Times”), Fernando Farinha remembers Armandinho as “that great commander,” ranking him as one of the most versatile Portuguese guitarists in the history of fado. There is no doubt that the innovations introduced by Armandinho during the first half of the twentieth century changed the Portuguese guitar forever and played a decisive role in shaping the sound of fado as we know it now. Hence, his incomparable talent and his extraordinary legacy will always live on.