What Is Fado? By Anton Garcia-Fernandez

As a little kid growing up in the city of Vigo, in the northwest of Spain, my parents would now and then drive my sister and me across the border to the little town of Valença do Minho, in Portugal. It was merely a 25-minute trip, I know, but to me it meant much more than that. The landscape on the other side of the Minho river, the natural barrier that separates Spain and Portugal, was not really different, yet it was this awareness of being in another country, in contact with another language and another culture, that made all the difference to me. This regular contact with Portuguese life, less than half an hour away from my hometown, led me to develop an interest in the Portuguese language and culture in general. In time, it would lead me to the discovery of fado, at first through releases by Amalia Rodrigues and Carlos do Carmo that my father had in his extensive record collection, and later through those by great fadistas such as Alfredo Marceneiro, Fernando Farinha, Maria Teresa de Noronha, Carlos Ramos, Lucilia do Carmo, Tony de Matos, Joaquim Silveirinha, and Filipe Pinto, to mention but a few.

Fado records were part of my luggage when I first came to the United States about five years ago: I play them constantly at home, and they are a regular part of my daily existence. However, I have found that the genre is largely unknown to English-speaking audiences; although it is possible to purchase fado recordings in the United States, not a great deal has been written about it in English. There are notable exceptions, such as Paul Vernon's A History of Portuguese Fado and Michael Colvin's The Reconstruction of Lisbon, yet for the most part, fado has not garnered major critical attention in English.

As merely a collector of fado recordings and books about the style, it is not my intention to take a dry, serious critical approach to the intricacies of fado in this blog. I simply would like to present the music, its history, its foremost interpreters and composers, and its most important recordings to English-speaking audiences that may not be acquainted with them or with the Portuguese language.

My area of scholarly research is mainly Spanish, English, and Portuguese literature; I am not a musicologist, and that is the reason why the articles published in All This Is Fado will deal mostly with the literary dimension of fado, as well as with specific songs, recordings, songwriters, and interpreters. I humbly submit these articles to the readers' scrutiny, hoping that they will be informative and interesting. If I succeed in getting people exposed to and interested in fado music, all my efforts will have been rewarded. Now, to the matter...

A Brief Sketch of the History of Fado

A Portuguese popular saying describes the essence of fado in the following fashion: "Fado can't be seen or heard; it simply happens" (“O fado não se vê nem se ouve; simplesmente acontece”). Like any sententious phrase, this is an extremely obscure utterance, but it is very much to the point, since fado has always defied a clear-cut definition, and its origins, in spite of the efforts of scholars, remain very much in the dark. In a recent message sent to me, Vitor Duarte, the grandson of the great fadista Alfredo Marceneiro, argues that the most important aspect of fado is that it is essentially Portuguese. 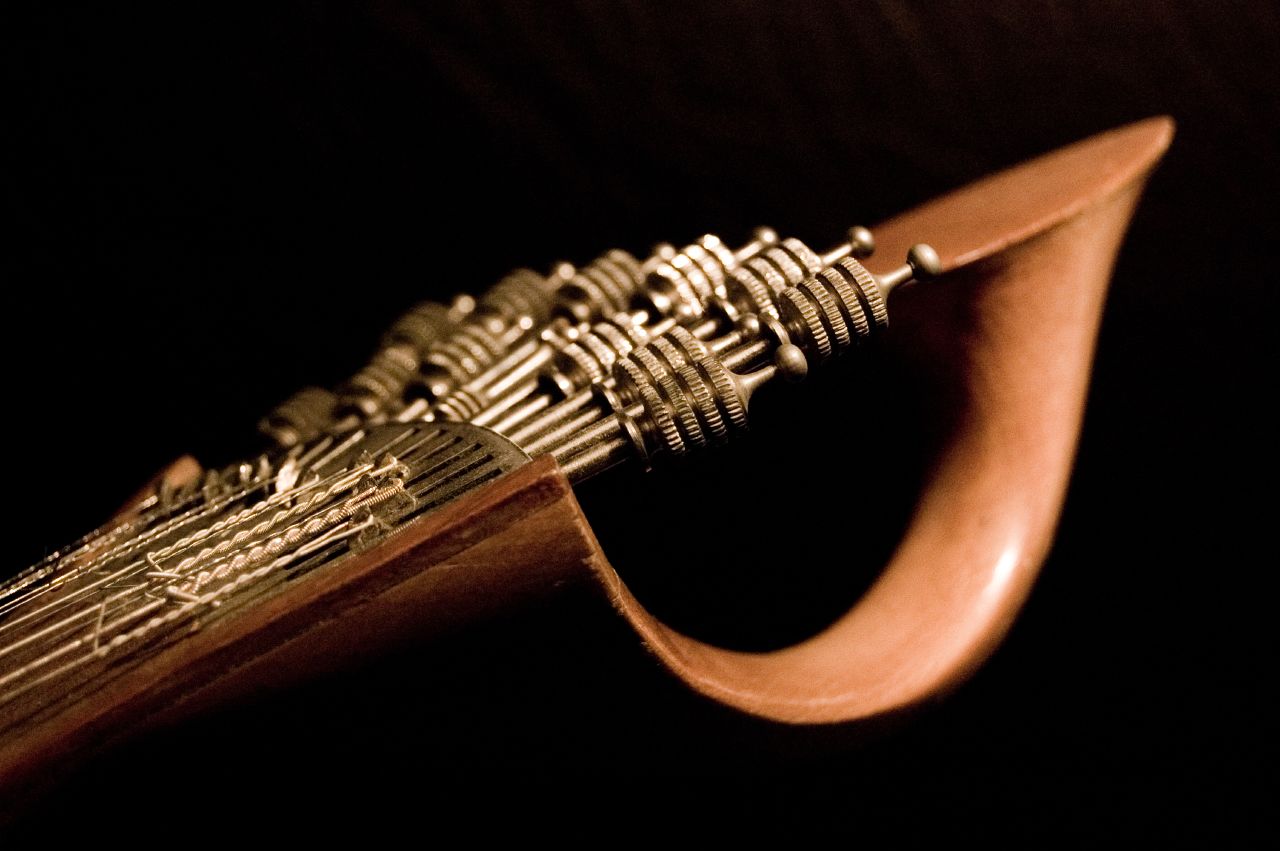 Notwithstanding the fact that some musicologists have attempted to locate its birth in Brazil, these theories are not stronly sustained, and there is no doubt that throughout the twentieth century, fado became a musical symbol of Portugal, so much so that it has been described as "true expression of the Portuguese soul." Yet, like the saying above, this nationalist-laden description of the genre is not enough: fado does hail from and is mostly sung in Portugal, and so describing it merely as Portuguese does not seem to help very much.

The question of the musical/literary origins of fado, then, remains open to interpretation. Scholars have tried to document its birth with varying degrees of success, producing a number of theories about the subject, none of which are fully convincing. One of these theories traces the origins of the genre back to the traditional songs of the Arabic peoples that settled in Portugal during the Middle Ages. This theory, however, does not bear in mind the fact that fado only appeared in Portugal and not in the south of Spain, also populated by Arabic peoples around the same time period.

Another theory, beautifully developed in Pinto de Carvalho's classic study Historia do fado (1903), asserts that fado derives from a certain musical form known as lundum, brought to Portugal by sailors who used to cultivate it during their long sea journeys. Indeed, Portugal has always been a seafaring country, and this origin would explain the preponderance of sea-related themes in early fado lyrics. Yet, Pinto de Carvalho's explanation is not always consistent and convincing--although extremely poetic in its development--and so this theory is not widely accepted.

Other theories argue that fado harks back to the rich medieval tradition of troubadour love and satirical lyrics, themes that are still common in present-day fado. However, it could be argued that these are universal themes, and most important, fado did not take root in other parts of Spain that boasted medieval poetry traditions such as that of Portugal.

Whatever the origins of fado may be, Eduardo Sucena (1) divides its historical development into three different periods. First of all, fado appears in Lisbon toward 1822, and in these early years, instrumental compositions and dancing are more important than lyrics and singing. The second period begins around 1840, when the use of the guitar becomes more prominent and the popularity of fado singing overtakes that of dancing. Finally, by 1888, fado is taken to the university city of Coimbra, and it is gradually accepted across social classes and appropriated by the aristocracy. This tendency toward crossing social boundaries is a key element of fado from its earliest years, as the story of Maria Severa (1820-1846) amply proves. 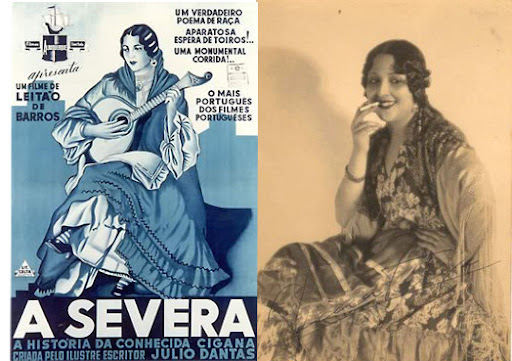 The figure of Severa, a Lisbon prostitute who played guitar and sang fado, has acquired a somewhat mythical dimension that makes it difficult to differentiate fact from fiction. Her love affair with the Count of Vimioso, a nobleman who appreciated fado, is widely seen as the first of many contacts between the nobility and the fado-singing working class, and as such, it is sung and remembered in many song lyrics. The pathos of Severa's story, brought to an abrupt end by her untimely death, as well as its iconographic importance within the universe of fado, calls for a separate article in this blog.

The advent of radio, phonographic records, and the cinema during the first half of the twentieth century changed fado forever, standardizing its sound and the image of its performers and creating an idea of genre. It was then that fado, originally synonymous with poverty, crime, roguery, and the lower social strata, acquired national and international exposure. Its interpreters, names such as Alfredo Marceneiro, Armandinho, Ercilia Costa, Berta Cardoso, Amalia Rodrigues, and Frutuoso França, among many others, also gained widespread recognition singing on radio, on records, in movies, in theaters, and in special establishments known as fado houses (casas de fado).

The physical image, dress code, and stage presence of the fadista were also constructed around this time, with black as the predominant color of the performer's outfit, in sync with a half-lit stage and a serious, almost stoic countenance. These elements are so very much inscribed in the popular imaginary of the Portuguese people that even the new, more innovative stars of the genre (Mariza, Katia Guerreiro, Camane) respect these prescriptions to a great extent.

The typical musical accompaniment of fado is rather sparse, usually consisting solely of stringed instruments such as the classical guitar (known in Portuguese as viola), the bass guitar (viola-baixo) used to stress the rhythm, and the Portuguese guitar (guitarra).

The latter is closely associated with the style, and its special tuning gives fado its recognizable tinkling sound. The Portuguese guitar is a very versatile instrument, and over the decades, great instrumentists like Armandinho, Raul Nery, António Chainho, Carlos and Artur Paredes have experimented with it and perfected its sound and devised innovative playing techniques. Even though fado singing is usually accompanied by these stringed instruments, there are many recordings on which the singer is backed by a whole orchestra, and Amália Rodrigues even cut a magnificent record accompanied by saxophone great Don Byas (2).

One of the most appealing aspects of fado lies in the lyrics of its songs, in which the poetic element becomes crucial. The best fado compositions are usually a perfect marriage of melody and lyrics, yet sometimes poetry prevails over the music, since many songwriters often create new lyrics for already existing tunes. The poetic universe of fado is dominated by the letmotif of saudade, a deeply nostalgic feeling of longing and yearning for love, for one's homeland, or for a past that will never be recovered.

Being a mostly urban cultural expression, the city is another key element of fado, whose lyrics constantly reference the experience of the city (mostly Lisbon and Coimbra), describing its people, its neighborhoods, its festivities, its dark corners, and its grand avenues. More traditional lyrics hark back to fado's possible pre-urban existence, depicting country scenes, character types, and popular traditions.

The theme of the sea is also quite recurrent, as is that of Portugal as the singer's motherland, an aspect that reveals how fado lyrics strive to come to terms with the idea of national identity. Just like other styles such as blues or country music, fado sometimes becomes self-referential, attempting to define its essence and generic boundaries, as well as celebrating some of its myths (Maria Severa, for instance) and foremost musical representatives (Armandinho, Alfredo Marceneiro, Amália Rodrigues, Ercília Costa). Finally, many poems by some of Portugal's great poets (Luís de Camões, Fernando Pessoa, Miguel Torga, José Carlos Ary dos Santos) have been set to music and entered the repertoire of fadistas.

Fado is cultivated mainly in two geographic areas of Portugal, Lisbon and Coimbra, which has given rise to two distinct styles of understanding and performing this kind of music. In Lisbon—as well as in Porto—fado is usually performed by fadistas dressed in black, and many of the songs touch upon the typical themes of unrequited love, the dark side of life, and popular urban traditions and characters. Most Lisbon fado compositions are actually story songs: they narrate a story that is sometimes more complex than others.

In Coimbra, fado is closely related to its ancient university, performed only by male musicians and singers who don traditional student costumes for the occasion. The fado of Coimbra has more affinities with popular ballads and folksongs than that of Lisbon, and many of its performers (José Afonso, for instance) fully embraced this traditional folk element. Not as well-known as Lisbon fado, the Coimbra style boasts many important names such as Edmundo Bettencourt, Augusto Hilário, António Menano, and the guitarists Artur and Carlos Paredes.

Finally, as far as the nature of its melody and its lyrical structure, there are several different styles of fado. Frederico de Freitas (3) notes that fado is "an essentially syllabic kind of song, as are generally most Portuguese popular melodies," and that the poetic structure of most compositions consists of quatrains made out of seven, ten, or twelve syllables.

Sometimes, fado melodies are uptempo (a style known as fado corrido), and in many cases, two or more fadistas improvise the lyrics in a contest sort of fashion (fado à desgarrada or fado ao desafio). According to de Freitas, there are many other recognizable styles of fado, namely fado balada, fado nocturno, fado serenata, and fado marcha, among many others, whose characteristics we will have the chance to explore in forthcoming posts.