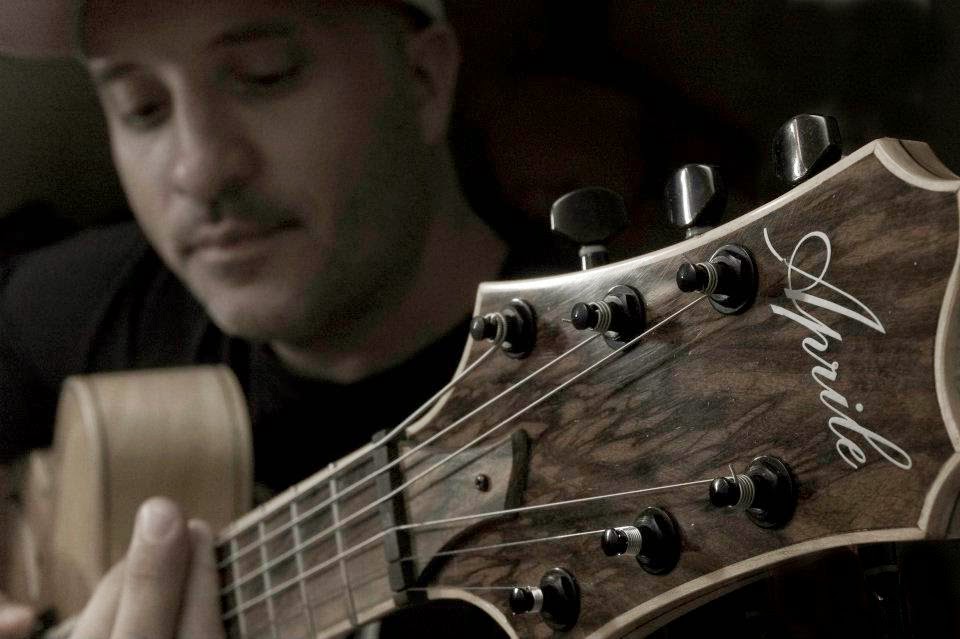 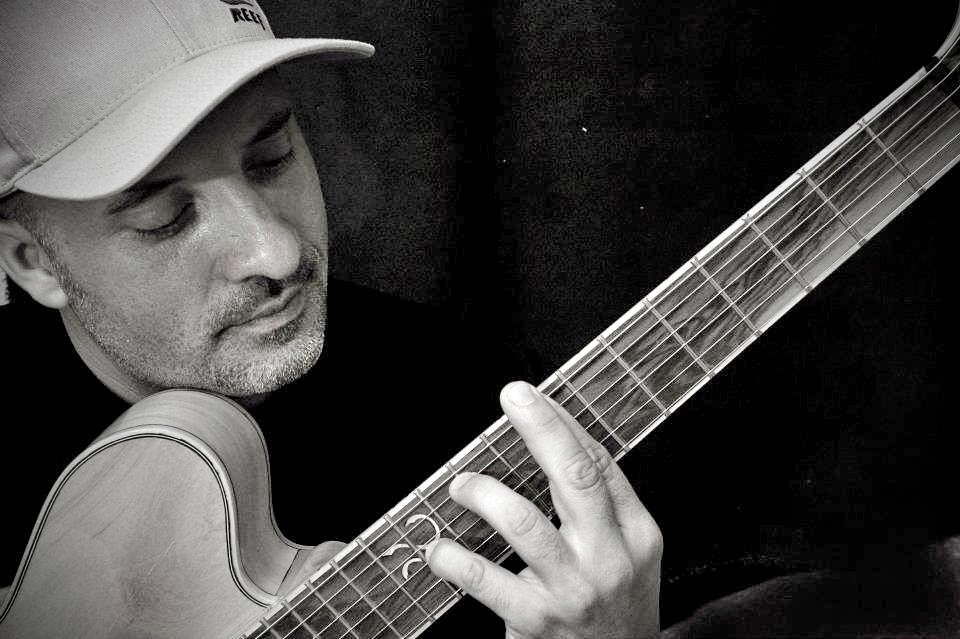 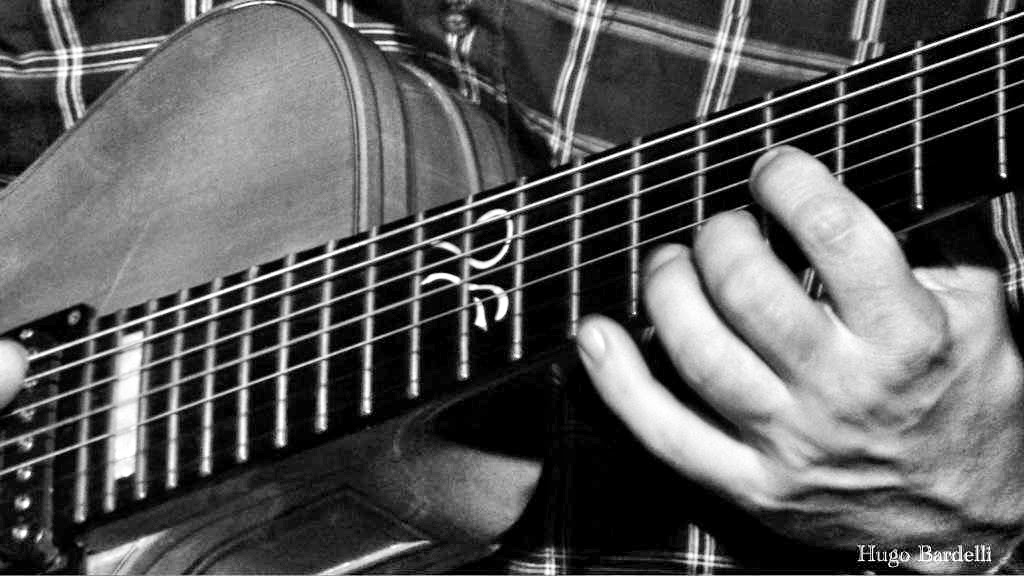 He played in the most importants venues of Buenos Aires, as wordly famous Teatro Colon, Rock’s temple Cemento, and jazz clubs like Jazz&Pop and Thelonious Club.
In NY, he have been playing at the 55 Bar and Bar Next Door.
Juampy has been teaching for the past 25 years, privately and at different universities from Bangkok to Buenos Aires. 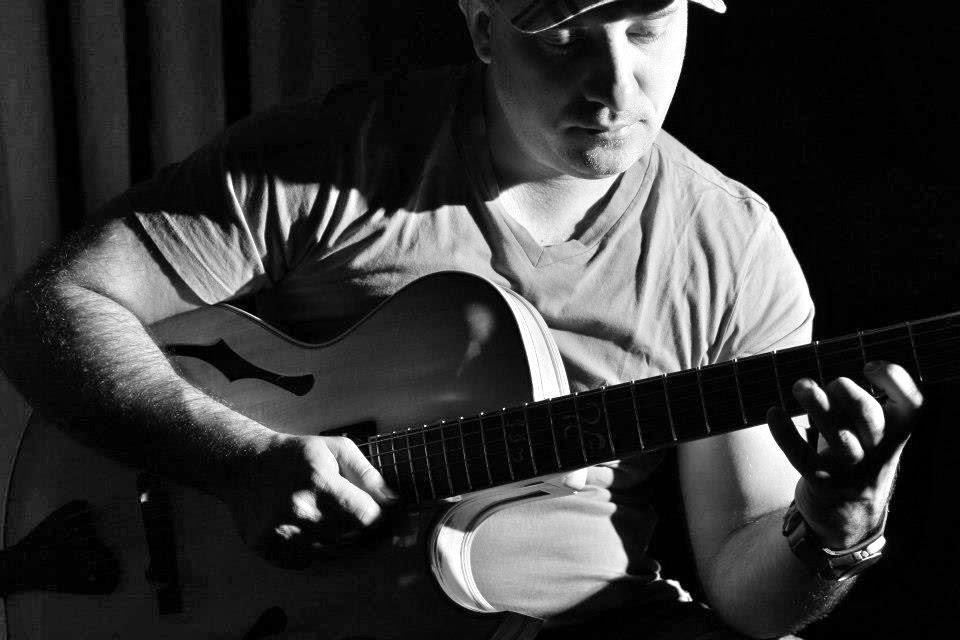 He is a clinician too, and writes lessons for music’s magazines.
He has written three books called “Contrapuntal Improvisation”, “Guitar Explorations”, and “Improvisacion avanzada III”.In these books, Juampy shows his investigations, new devices and own variations on Jimmy Wyble’s techniques and dodecafonic/Atonal stuff, Fibonacci’s series and beyond.His main musical project is Powerjazz trio; the group has 2 recorded cd’s(one with John Stowell like a guest)and one dvd.Juampy also has a guitar-piano duo playing original 12 tone and atonal music with one cd in the streets. 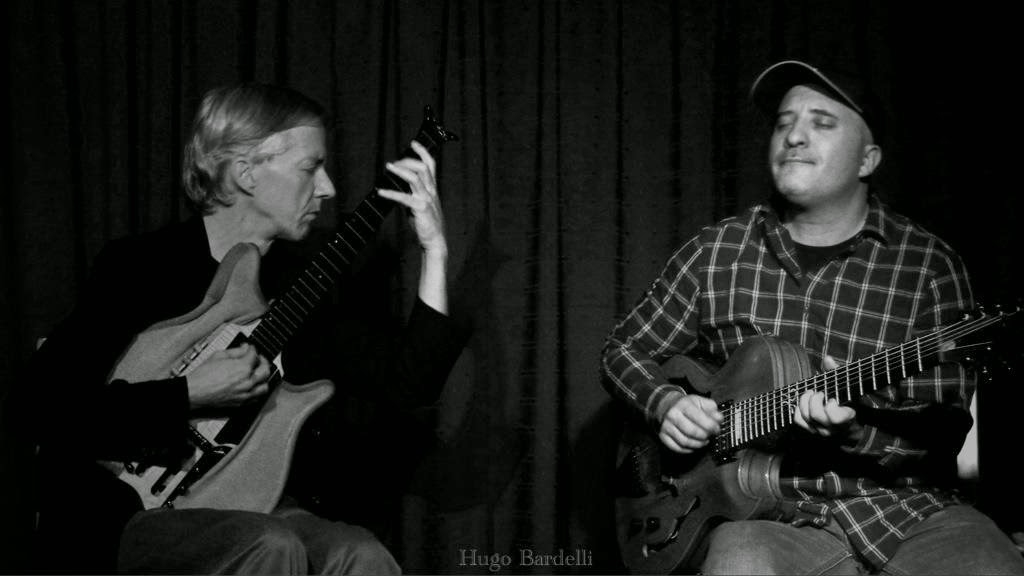 His latest project is the Juampy Juarez Trio, with Chino Piazza on drums and Juan Bayon on bass, two of the best South America’s jazz musicians.They recorded together South Monk a new CD paying homage to legendary composer Thelonious Monk. Juampy’s duo with piano player Fernando Pugliese, called simply ”Standards”, pushing the limits on this genre, with innovative harmonies, intriguing dialogues and interplay between piano and guitar. Both  available at www.cdbaby.com. Juampy also has a guitar-piano duo playing original 12 tone and atonal music called Praxis that already has one CD on the streets. Also a guitar duo con great American player John Stowell, with two CDs, one in a quartet setting and one duet called Games and Gems, using counterpoints and interplay, a moden jazz duo guitar that has excellent comments among musicians.
Juampy Juarez is endorser of Di Marzio pickups, Hamer Guitars, German Aprile Guitarras Artesanales, and Argon gigbags. 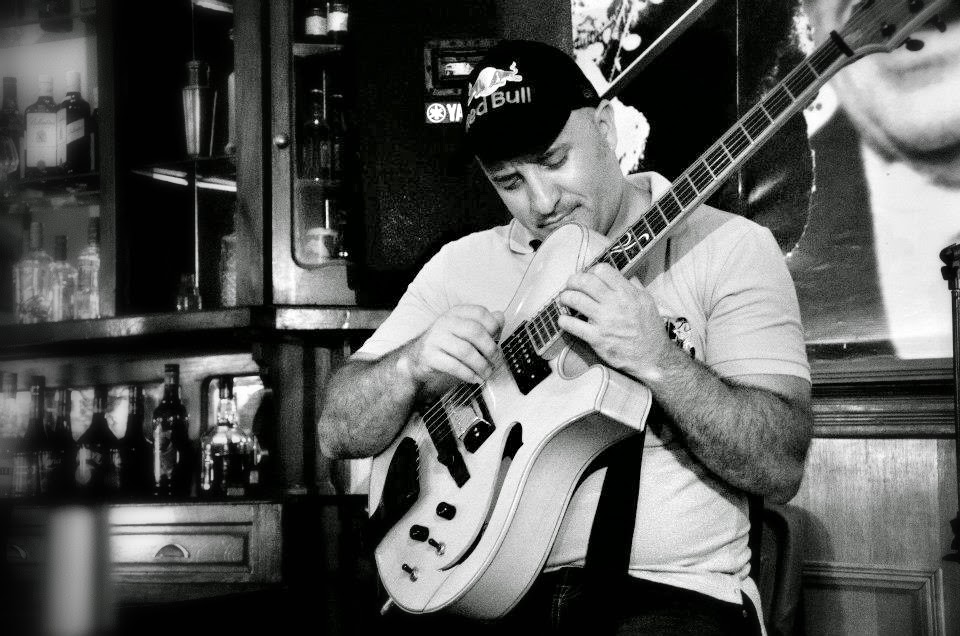 My first guitar was a gift from mi mom for my 13th birthday, it was made in Argentina nylon guitar, "Armoniosa" bears his brand inside it, and practice with this one many years, was a really cheap guitar made with fake wood in his body,  and his strings were one mile far away the neck, but thanks to it help me to develop a good technique, lol.

Barely I can remember it, but I think that was "Unmasked" a kiss album when I was ten.
My last one was a solo album by my friend Gene Bertoncini.

I expect for music that it continues transforming this world in a better one, helping people to get more spiritual and less material or consume oriented. But the problem it's no music, actually creative music needs more channels to massive audience, and not keep in secret for musicians only.It's no artist's fault, if not authorities and businessman owners of TV channels, radios, newspaper etc, etc.

My last albums, my trio album"South Monk" tribute to legend TS Monk, available at Itunes, Amazon and Spotify, edited by neworldrecords, and my duo album called "Standards" available at www.cdbaby.com surprised me, the first one, because we already recorded in 4 hours, and it was very group inspired, courtesy of titanic players Juan Bayon on bass and Chino Piazza on drums, with almost no overdubs, with risks, it swings and sounds contemporary, and the second one, because the counterpoints in it, floating around piano player great Fernando Pugliese, I think that I discover my own language for comping and in this record you can listen it.

Technique is important only for let talk your own heart, for let your feelings and emotions get away from you to the audience.Technique is a tool, and never a goal.Sadly, in the days that we live, it's looks inverse.

I admire from musicians in first place TONE, the risk, the rhythm, the melody sense , and the capability of storytelling when he improvise and compose.

I admire musicians that become an artist, the innovator, then and icon, like Coltrane , Ornette, Hendrix, Beatles, Zeppelin, Piazzolla, Schomberg, Bartok, Wagner, Beethoven, Bach, Miles, Parker, Bill Evans, Shorter, Holdsworth, Ravi Shankar, and many many others.

A good instrument let you playing inspired, with the harmonics resonating and with a full , warm tone, a comfortably neck it's a must, and for me, I like guitars that were build for work, not for a museum or for take too much care.When you tour, or are gigging a lot around your city, many times it crash against things, and it have to resist it, I don't like guitars that looks like gems.

Digital scene help to spread creative music to places that was impossible to difund, when I grew up in Buenos Aires, it was almost impossible to buy many albums, so you have to somebody to import it from The States or Brasil.

Now it's to much easier, but the bad part it's that many mediocre or less than it wanna be musicians are uploading videos and music to the net so the good music and the bad music walk together there.

I always look for a warm, fat sound rich in harmonics, with sustain and clear for chords.

Now I'm using a DDL4 delay, a Radial Tone bone for a little distortion, it has a warm sound, I just add it for sustain, because I'm using an archtop.A Morley volume pedal help me with expression and Boss Octave, complete my tone-palette.I want that somebody invent some pedal for sustaining chords and note with no distortion, but this dream never become real until now.

I agree with Miles that silence it's the most louder sound.

And I look it for the music that I love, every time.Riffs and melodies with space rules, at least for me.

I play music for tell people that who I'm, no other language or discipline tell more about me that music.I love music to the death, it changed and saved my life, helped me to be a better guy, and teach me something different every day.

I discover something new almost daily, so I live happy being a musician.
I can't think in a better life.

I played in Bangkok, Thailand for 4 and a half months, in a five star hotel, playing for Kings, ambassadors, famous actors, sharing licks with people from all around Asia and Europe.
That time was unique.
Playing with such legends as Howard Alden, Ben Monder, Steve LaSpina, Jack wilkins, Gene Bertoncini, John Stowell, Peter Mazza, and many others fantastic guys too.I love to share music with people from another cultures and countries. I put my feet in the five continents. I'm a lucky guy.

My craziest project is my duo Praxis (with Sebastian Crusvar on piano and me on guitar), all the compositions are atonal or 12 tone and were penned by me, and the pianist is a friend from my childhood, so playing with him it's too emtional for me.You can get this album for free just sending and email to juampyjuarez@hotmail.com 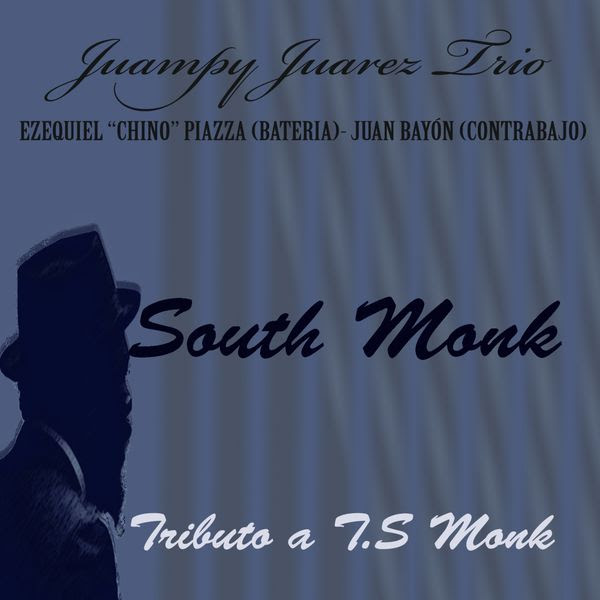 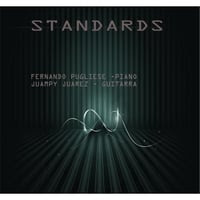 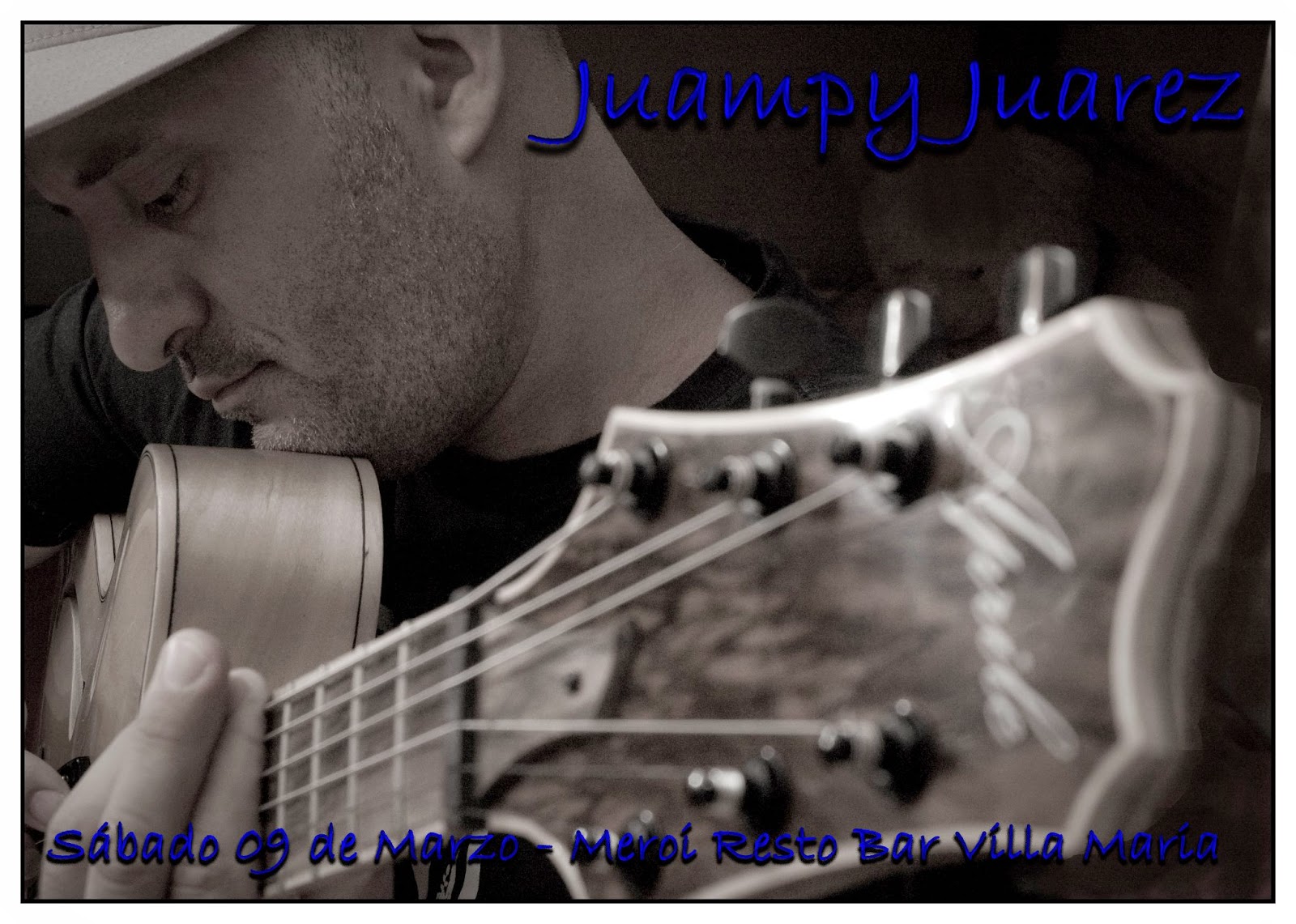