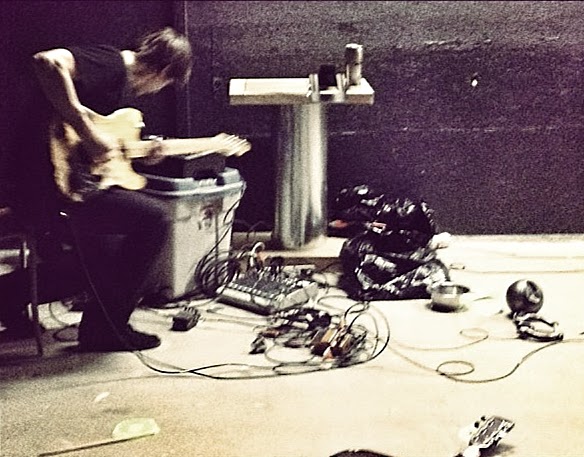 Canada-based guitarist multitasker, Brian Ruryk  has been tantalizing the concepts of sound since the 80’s., like a central secret part of the Toronto's experimental scene, through heavily manipulated, highly unconventional guitar sound, showed in a raw form, direct, expressive and thinning the mediation through a cheap-fi aesthetic.

From the deconstructed mind of Javier Fuentes: Brian Ruryk takes his tenured career in junkology to new and incredible fields of research. Oscillators duck for cover under a shower of sonic debris. Shattered fretboards recover alongside a growing pile of deconstructed minds. A science class runs electrons through grey matter, each track serving up an impromptu reflex test. A frantic and mesmerizing alchemy takes place as tools are wielded and discarded. Unravel the broken strings of your conscious self and enter this warped playground of auditory signals: desolation, obliteration, wreck, defeasance, wreckage, havoc. 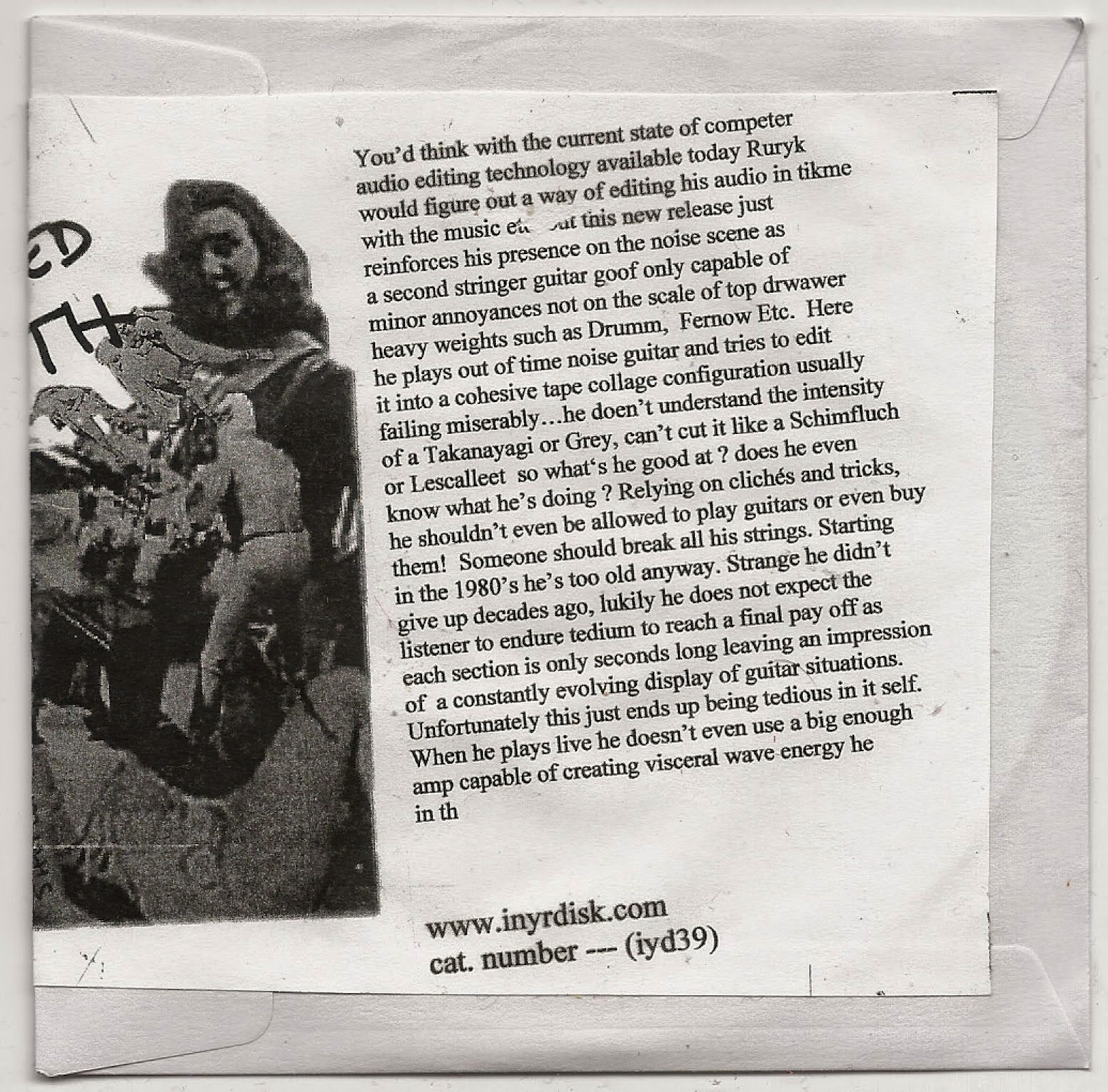 In an old interview he defined his place that way:


"As a guitarist I consider myself useless. In my mind, I am a musical midget; guitar idiot; or a primitive plain and simple. I continue to play and have been doing so for over 30 years. It has gone through many phases; for example there was a time when I didn't own an amp, so I'd go to phone booths break the phones and steal the mics. I taped them to the body of my electric to amplify the strings, but I found if I played in my normal way some of the notes were way too quiet and didn't sound right, so I had to re-learn to play only using the notes that sounded right. Those telephone booth mics determined what I could or couldn't play.

Recently I've been recording myself on awful sounding cassette machines, playing it back, re-recording and then re-recording it again, playing that back and re-recording with new guitar parts, then applying typical cassette player manipulations, then editing, then re-recording etc etc etc. I'll travel any distance to hide that stupid shit sound of an acoustic guitar."

My first guitar was a Gibson SG copy which was called a "Valais", I think.  I remember it being horrible, even by the low standards I had at the time.  The action was really high and it really hurt my hands when I played.  I remember leaning it up against my bedpost while I played to amplify the sound... I later discovered I could plug it into my father's stereo which I did until I blew a speaker. My friends all did that.

1. A constant rumble from the 427 highway in Etobicoke, Ontario Canada
2. Jets taking off from the nearby Pearson Airport.
3. The sound I heard as I put my head under water when my mom gave me a bath, I remember being  really conscious of how the sound of everything changed underwater.
4. Covering and uncovering my ears with my hands.... later I recognised a similar sound when I discovered EQ sweeping.

I guess I’m curious, and want to hear things in specific configurations , it’s all ego I admit it!….and when I say things I mean combinations of sounds I'm not already hearing, so I guess I'm filling in gaps of my own listening habits?  Also, I think it’s important to go out and play places, create alternatives to regular venues and entertainment etc….and it’s a way to escape, you know get lost in your head?

“Rock n’Roll Pt 2” by Garry Glitter was the first 7”, and “Shinin’ On” by Grand Funk Railroad was the first LP I bought… just checked it and the guitar solo on “The Locomotion” still rules….hahaha, it was produced by Todd Rundgren!  Most recent?? ummm... “Basement Instinct” by Sindre Bjerga, which I just bought online yesterday and haven’t heard yet.

How would you define silence? And Noise?

I used to know these guys that were into groups like Soundgarden and Nirvana, they used to describe the act of playing music as "making noise".  I also remember these punk rock  guys that liked describing their music as "noise", like it was some kind of lower order music, or somehow abrasive, or attacking the existing order or something, just want to say, I find those definitions hilarious !...but isn't noise really only something that’s used in the  measuring of scientific/acoustic phenomena??  I know if you look at Audacity or other software, there’s a way to produce “White Noise”….broadband frequencies…. any other definition seems too subjective to discuss….ummmm obviously there’s the genre of music called "Noise" most of which is created in the electronic domain, so could be considered “electronic music”….some say noise is formless sound or interference in general, it's all cool with me...my music has been described as noise which doesn’t bother me, I guess. 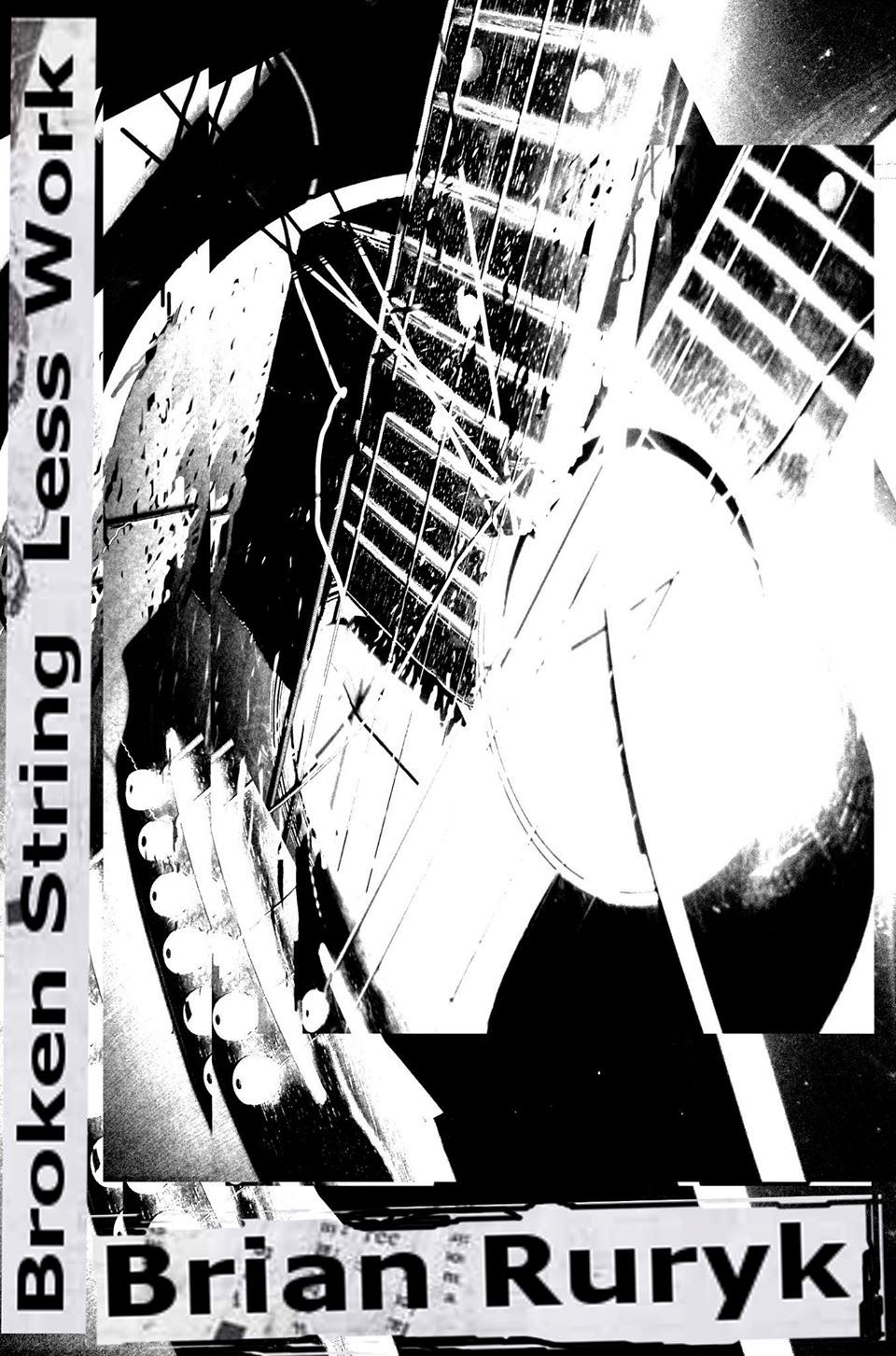 Silence??  That’s a fallacy right? I think we all agree it doesn’t exist… I mean even if there is no sound around you you’ll still hear your internal sounds right??  I’ve never experienced true silence, but it's a word we all commonly use and understand to an extent.  “Silent” films were never really silent because I'm sure projectors in those days produced a lot self noise...

I think in general there’s been so much discussion of silence and noise in the past 100 years that I really don’t think I can add much... 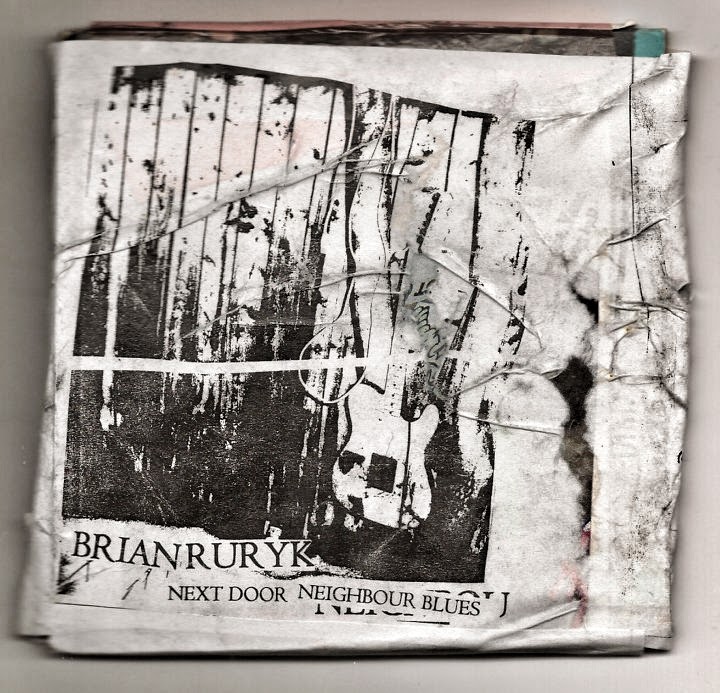 In 1981 I saw Fred Frith play a solo show, I was 18, I had never heard him before, and he blew my mind. My favourite part was when he dropped coconut flakes on his table top guitar and it made absolutely no sound...I thought that was probably the most “far out” you could get, right?...so yeah, maybe a collab where we flesh out that idea for half an hour or so… or maybe a jam with the Jimi Hendrix Experience? He was the first "free" guitarist I ever heard, like when he used to smash his amps or light his guitar on fire?  Those were pretty awesome extended techniques IMO, those sections sounded wildly noisy.  An email editing project with Iannis Xennakis perhaps? A duet LP with Eddie Van Halen? you know, force him to play really outside stuff ???

It’s so easy to self-publish now, which is good in some ways, in other ways not so good, cause some  people seem to be putting literally everything online without self-editing….it can breed mediocrity.

Obviously, it's so easy to hear things now, you can listen to things before you buy the physical copy, which is great!  Before the internet, you'd send away for the record, or tape and wait a long time to receive it.  Then there was always a chance you may not like it, or it wasn’t what you expected.... but sometimes that was OK, I know once the record was in my hands I'd play it over, and over until I found something I liked about it, it’s like I almost forced myself to accept it for what it was, or I’d see something in there that wasn’t initially apparent.  File sharing removed much of the risk in consuming music…but I think I miss the risk.

I'm working on a feature film called Too Stupid To Have A Good Time, it features my music plus video images I’ve shot, no real agenda, but so far, I seem to be creating direct relationships between sounds and images, almost to the point of “mickeymousing”.  I find I edit videos in a way that is similar to sound…the images look like the sounds, similar movement and densities, the edits are quick and at times incongruous.

The fact that I play in front of people makes me a performer, therefore I exist visually too….so there’s that.

I think playing an instrument is like having a conversation,....all instruments talk to you differently, and I think it's difficult to find one that responds appropriately in all situations.  On that note, I've had to modify my guitar by installing contact mics and ripping out all of it's electronic components.

I have a quarter inch patch cable wired directly to the bridge pick up that gets plugged into an overdrive box, then into a mixer, similarly the contact mics are also routed into the mixer.  I consider this setup as a whole to be one instrument that responds to me very well.  Overall my guitar is pretty much a piece of shit, so I feel free to drop it, hit it, throw things at it, I don't really care what happens to it.  So in that way it’s also "good".

Guitar, mixer, objects and pre-recorded content...typically the objects are thrown, hit, or played in a manner that is intended to interact with the other elements....it works sometimes other times not so much....occasionally I play objects with one hand and guitar with the other or in a combination sometimes I wonder if the objects are an extension of the guitar or vice versa  or if both are just separate, or….

The pre-recorded stuff can be anything, field recordings, guitars, mangled tapes radio recordings....

I suppose I can use anything as an instrument….

I feel like I've seen so much great music by so many great people over the years, that it's hard to decide on the best, but what I’m most amazed by is how my perception of the music changes as I get older...I mean, what seemed difficult and impenetrable in 1983 seems like such an easy listen now....I remember seeing DNA in 1981, (the version with Tim Wright on bass), I found it shocking at the time. I had no idea what was happening, I made a recording of that show, brought it home and listened to it over and over until I had it memorised...I recently listened to that tape and it now seems so normal!! I find that fascinating!! same thing with Albert Ayler, Beefheart’s “Trout Mask Replica”…they all started off as seemingly difficult….

None of my projects really seem that crazy to me....although my current mode of performing does play with the idea of disaster and failure...typically the show is over when I have nothing left to play...like when my setup is so tangled up/unplugged/ destroyed that I can no longer figure out how to make a sound or fix it in a timely manner....it usually reaches that state as a result of the physical manner in which I play.  I knock things over, pull out cables, break guitar parts etc etc  encouraging disaster as an improvising partner…
Is that crazy ? hmmmm


Great question!!…..umm being a musician or whatever I am, is just woven into my state of being...I can't not do this. It’s like asking me what I like most about being alive…....I can only think of smart ass answers to this question, and so far what I’ve said just seems so corny hahaha… so I'll just stop right here. 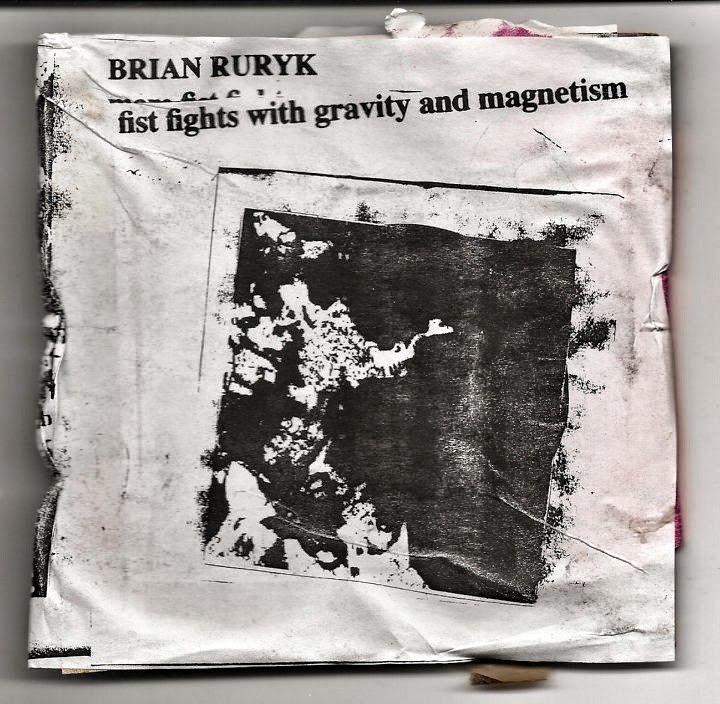 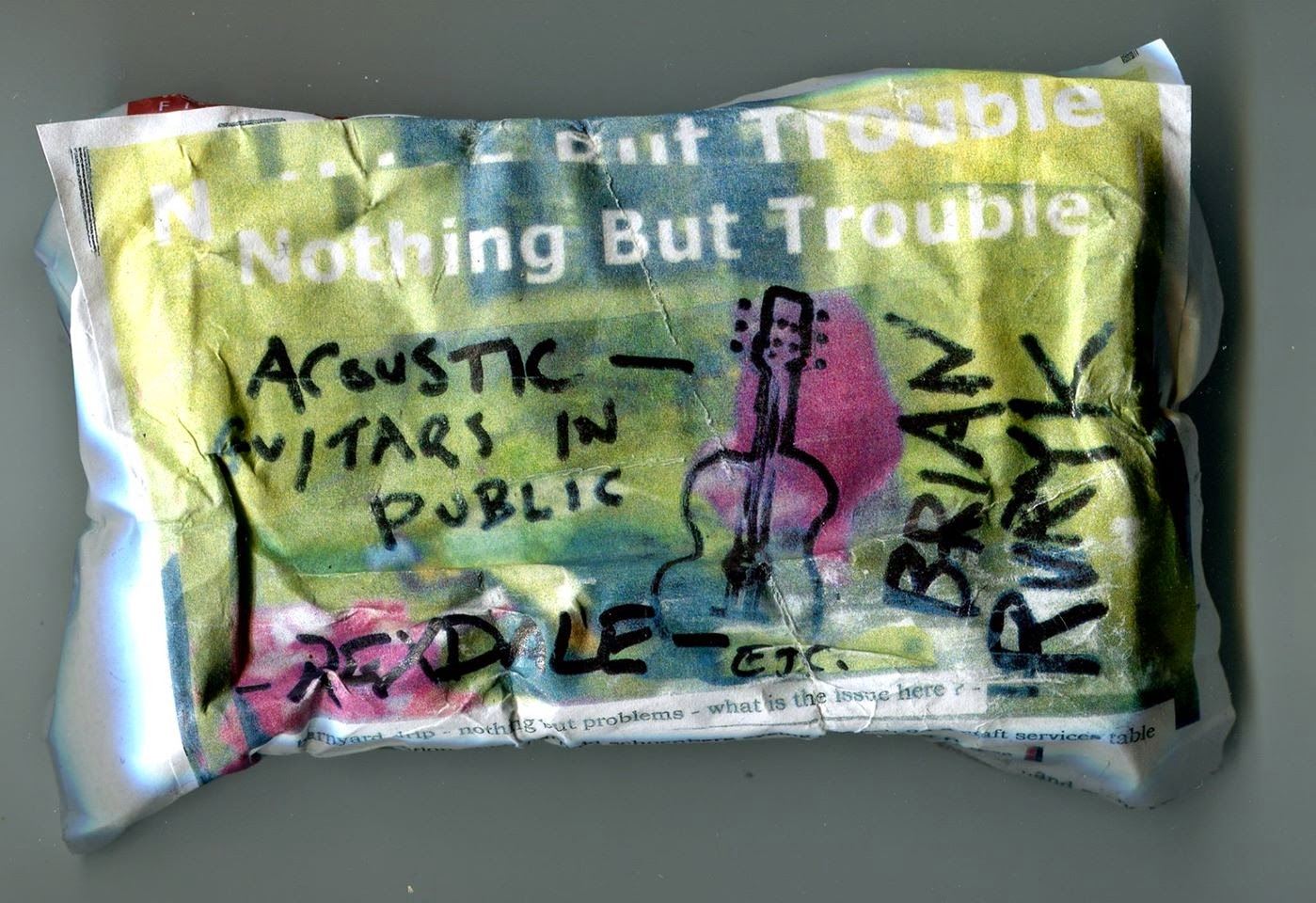