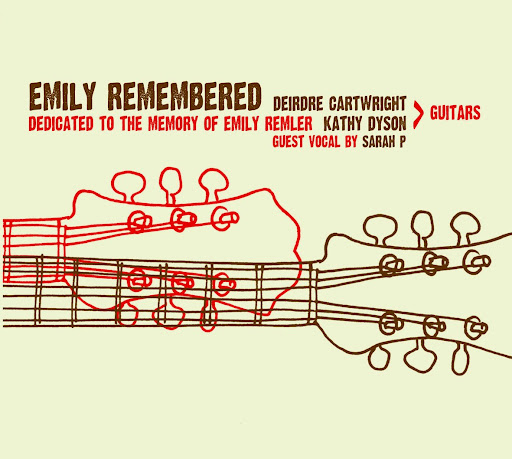 The duo Emily Remembered is formed by Deirdre Cartwright and Kathy Dyson. The two women have both gained an international career in various formations. They represent a rara avis in the British jazz landscape, predominantly male. Armed with this exceptional status, Deirdre Cartwright and Kathy Dyson launched the Emily Remembered project to honor the great New Yorker that was the guitarist Emily Remler.

Born and brought up in London Deirdre Cartwright bought her first electric guitar when she was fourteen; however she had to keep her ambition to play in a band a secret from the nuns at her convent school. Mainly self-taught, she discovered the sounds of blues and jazz, and from the age of 17, began to play with a variety of bands from rock to big band jazz. In 1991 Deirdre formed her own group, The Deirdre Cartwright Group. As a solo artist she has played with American guitar legend Tal Farlow, toured with Jamaican composer Marjorie Whylie, and has played throughout Europe. She has also seen the regular jazz club she co-runs Blow the Fuse become one of the most popular in London and has been a regular presenter for BBC Radio 3.

Kathy Dyson is a jazz guitarist, composer, researcher and educator based in Manchester. She first studied at Leeds College of Music in the early 80’s, co-founded Leeds Jazz, then set off on a five year tour of Europe with her husband John and daughter Ruth. They performed at the Sorgues, Ulm (in Germany) and Avignon Festivals, were taken in by the gypsy communities in the South of France and Germany and performed at gypsy clubs and gatherings. They also played for innumerable private parties and functions including riverboat trips down the Rhine and busked under the disapproving stare of Beethoven to an audience of 600 in Bonn. Currently she plays the Inside Outside jazz duo with John Dyson, and a quintet called John Dyson’s jazz Police with John Dyson, Martin Longhawn, Steve Hanley and Tom Riviere.

Accompanied by the London Festival Kazz vocalist Sarah P., the duo alternates compositions of their idol, jazz standards and own works. A nice patchwork at the confluence of genres.