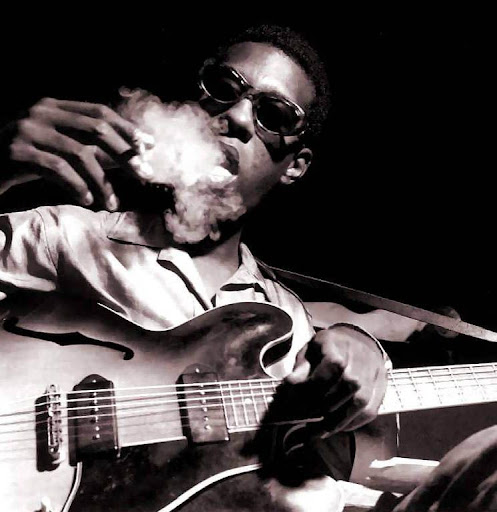 When Grant Green arrived in New York in the summer of 1960, his distinctive sound was already in place. On his first recording session with Jimmy Forrest (of Night Train fame on All The Gin is Gone) you can here the distinctive cutting tone and the driving swing that became his trademark. On his first Blue Note recordings his playing has a focused, pared down quality. There are no unnecessary notes, instead you get blues and bebop-inspired melodies that sound as though they have been arrived at by a process of natural selection.
One of my favourite solos from his early Blue Note years is No. 1 Green Street from Green Street. The line-up is just guitar, bass and drums yet there is musical interest to sustain chorus after chorus of Grant’s soloing. This is one of the II-V-I s:

Grant’s playing has often been described as horn-like, as has Charlie Christian’s - the first of the modern jazz guitarists. It certainly is in the sense that he does not use chords and only occasionally uses double-stopping. Wes Montgomery, Grant’s more famous contemporary, would use a variety of techniques in his solos to build intensity and interest. A few choruses playing single notes would be followed by several choruses of his trademark octave playing and crowned by a chorus or two of chord-based soloing. On Grants soloing here, the interest is in on the melodic ideas. What you get here is sustained intensity, each chorus standing up in its own right as great examples of jazz improvisation. In this sense, Grant has more in common with Sonny Rollins than Wes Montgomery.

Despite being horn-like, Grant’s playing is also deeply guitaristic. The way he slides onto notes, uses a plectrum vibrato, and uses a guitarist’s false fingering, are all techniques associated with the guitar as a blues instrument. "The first thing I played was boogie woogie," he once said. "Then I had to do a lot of rock and roll. It's all the blues, anyhow."  He also has a nice line in chordal accompaniment that typically gets overlooked - Up at Minton’s and Blue and Sentimental. His chords are sparse - often only two or three notes, but they are well placed and always add to the groove. Similar to Freddie Green in the sparseness of his chords and to the left hand of the bebop pianists in his rhythmic feel.

Spread throughout Grant’s solos in the early sixties are motifs that appear time and time again. He has a bag of licks that he can pull out and use in a variety of different ways - when he want to put the rhythm section together and focus the music, when he wants to coast for a few bars before embarking on his next idea, when he wants to increase intensity. He jealously guarded this bag of licks for fear that some young guitarist in New York would use them steal his thunder.

Another good example of his playing in this early period is on Up at Minton’s I and 2. Hearing this live recording gives you a good idea of why Grant made such an impression on the New York scene when he first arrived. There was simply no guitarist who was as consistently exciting or as cool. He sounds as though he is taking risks, as though you have no idea what he might play next. He’s laid right back in his chair while you are on the edge of your seat.

As an organist’s guitarist, Grant Green has had few equals. The Hammond B3 organ and guitar has always been a distinctive sound - they complement each other beautifully. The treble of the guitar soars above the mellower, bassier sound of the organ. There’s none of the competition for the higher harmonics that you get between, say, a guitar and a piano. Grants’ recordings with the organists John Patton, Brother Jack McDuff and Baby Face Willette are of the straight ahead variety - plenty of swing, plenty of blues, and plenty of preaching in the gospel tradition. Great examples include Lou Donaldson’s Goodness Gracious! with John Patton, Jack McDuff’s The Honeydripper, and Baby Face Willette’s Stop and Listen. Larry Young , on the other hand, represented a new kind of organist, a young man influenced by John Coltrane and the modal tradition. His playing is less testifying and more reflective. His lines are clean and modal and don’t rely purely on the chemistry of blues licks, hot valves and loud amplification.

Grant found a partner in Larry Young with whom he could explore a more modern, more reflective side. His playing with Larry Young has less reliance on licks and more sense of an artist feeling his way. This can be heard on recordings like Into Somethin’and Street of Dreams, both of which contain some outstanding modern compositions by Larry Young and Grant Green. There is a strong sense that both musician are trying to capture a contemporary sound. There are examples of 5/4 rhythms, bossa nova and latin, modal jazz. One motivation for this has to be Grant’s desire to stay on the forefront of popular black music.

Of the ‘theme’ albums that Grant made (The Latin Bit, Feelin’ the Spirit, Sunday Mornin’), The Latin Bit is an example of Grant at his best. The tone for the album is immediately apparent from the cover art that has Grant sitting wearing a poncho with guitar in hand. It’s a good-humoured, Latin-influenced romp with no pretensions of seriousness. The playing has a joyous, sunny quality about it and is great example of jazz as ‘happy music’ (as Duke Ellington once put it). This recording shows once again how Grant easily adapts to his surroundings without compromising the integrity of his playing.

Two outstanding recordings from first half of the sixties are Solid and Idle Moments. These recordings probably have the broadest appeal for jazz fans as they are heaviest hitting in terms of the company he was keeping the drive and swing of his playing. One of Grant’s unique qualities as a jazz guitarist is his ability to hold his own with a driving rhythm section and alongside saxophonists at the cutting edge of the jazz of that time. The theme statement of George Russell's Ezz-thetic is not a simple one. This puts pay to any doubts about Grant’s ability to play complex modern music. Like other musicians who are often described as ‘hard bop’ (e.g. Horace Silver, Sonny Clarke, Lee Morgan) Grant made simplicity and directness a virtue in his playing. However, this does not mean he could not tackle complex modern music. The very complexity of tunes like Ezz-thetic inspire Grant.

When Grant returned to Blue Note after a quiet period in the mid sixties his recording were strongly influenced by Motown, The Meters and James Brown. What these recordings have in common with his early sixties recordings is they are firmly in the the black music tradition, with the emphasis on soulfulness and groove. Hurt So Bad on Carryin’ On is a beautiful pop ballad and Grant’s solo contributions are simple, uncliched and moving.

Alive! and Live at the Lighthouse - like Minton’s - most exciting jazz funk. This is one of the main reasons for Grant’s recent popularity. Overlooked by jazz fans of the time, in these times of much wider definitions of the genre, it’s possible to fit into what was happening at the time and Grant’s own career. Once again performed with integrity.

Probably wrong to ask what his Grant’s aims were. perhaps worth trying - to please himself, to create something that was exciting and moving to listen to, to make a living. For most of his career he succeeded in all of these. If he ever compromised his musical integrity, it was because the need to earn a living was top of the list.

Many times George has openly acknowledged his debt to Grant Green - without Grant Green, would we have had Breezin’, the biggest selling jazz guitar record of all time? More recently, guitarists like Mark Whitfield and Russell Malone have shown a very obvious debt to Grant Green. One of my favourite of the contemporary guitarists is Peter Bernstein, regularly plays with the organist Larry Goldings and who has been a member of Joshua Redman’s regular band. He manages to combine elements of Grant Green (blues and rhythmic inflections) and Jim Hall (motif-based improvisation) with a style that is all his own. These guitarist are all captured on the Tribute to Grant Green CD, along with Dave Strykker, Ed Cherry and Grant’s son Greg, a fine jazz guitarist in the style of his father. This CD throws fresh light on the strength and originality of Grant’s compositions, like Jean de Fleur, Grantstand and Matador and highlights the unique style of each of the contributing guitarists.

John Harris
Sunday, December 27, 1998
http://ajazzblog.blogspot.com.es/
Thanks to John Harris for the kind permission to reblog this article

Grant had a very distinctive sound. A combination of his guitar technique, the guitars he played, his amplification and the way he was recorded. Here are some of the guitars he used:


Thanks to Ted Gottsegen fo this information. 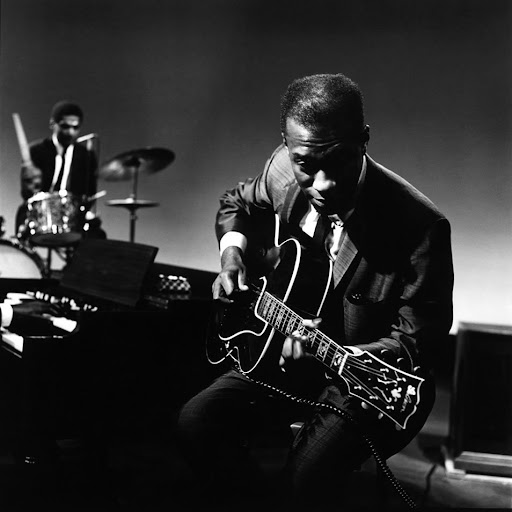 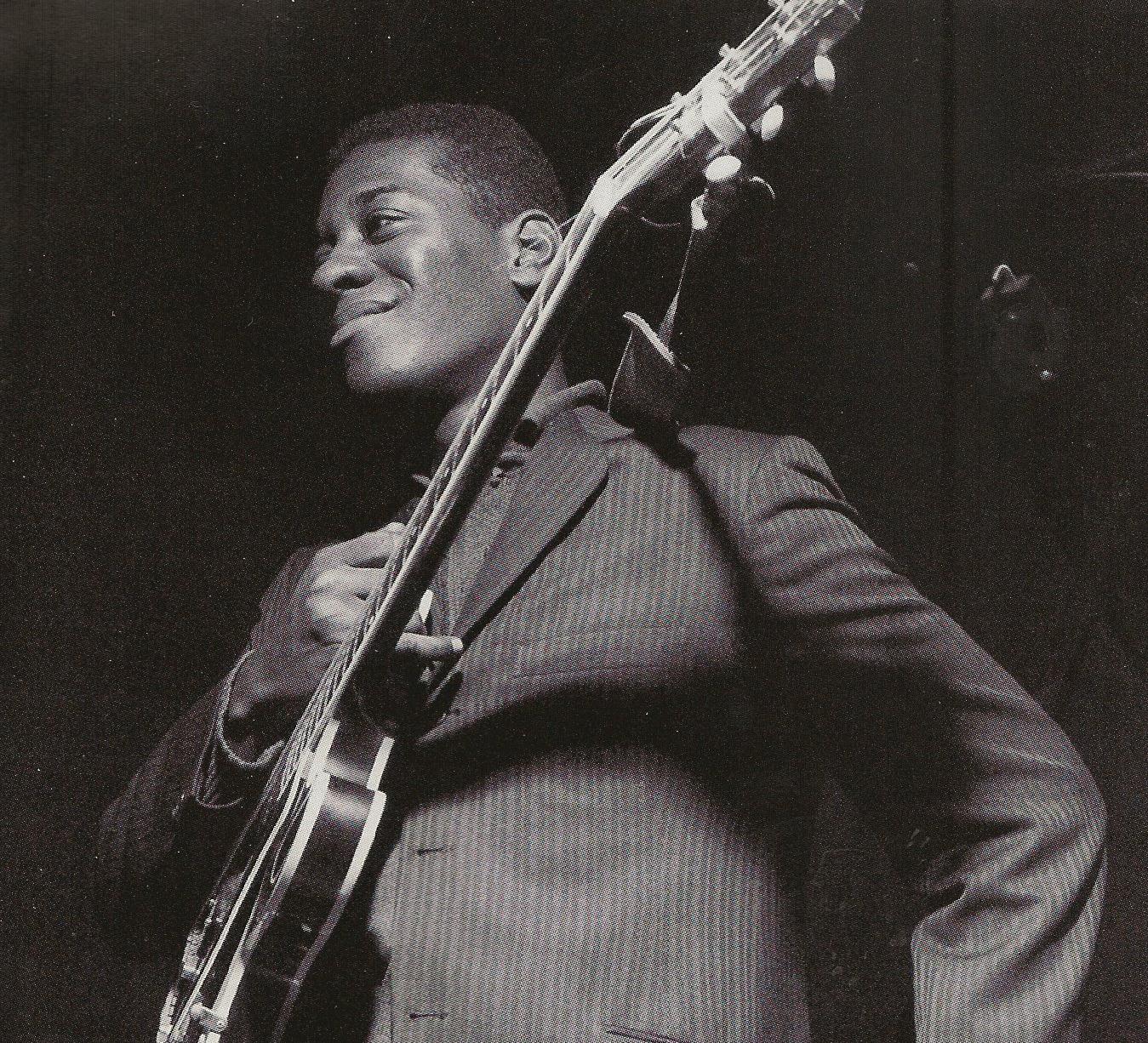 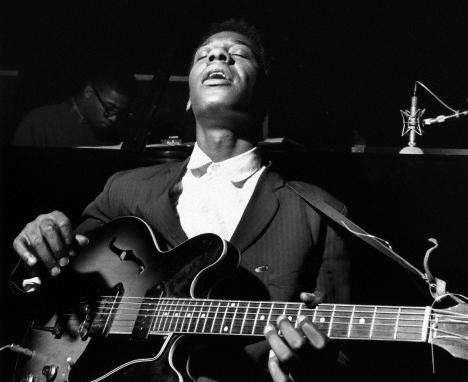 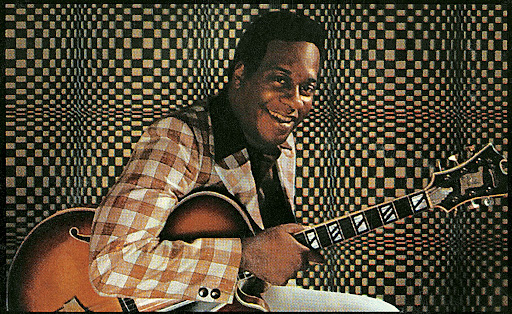