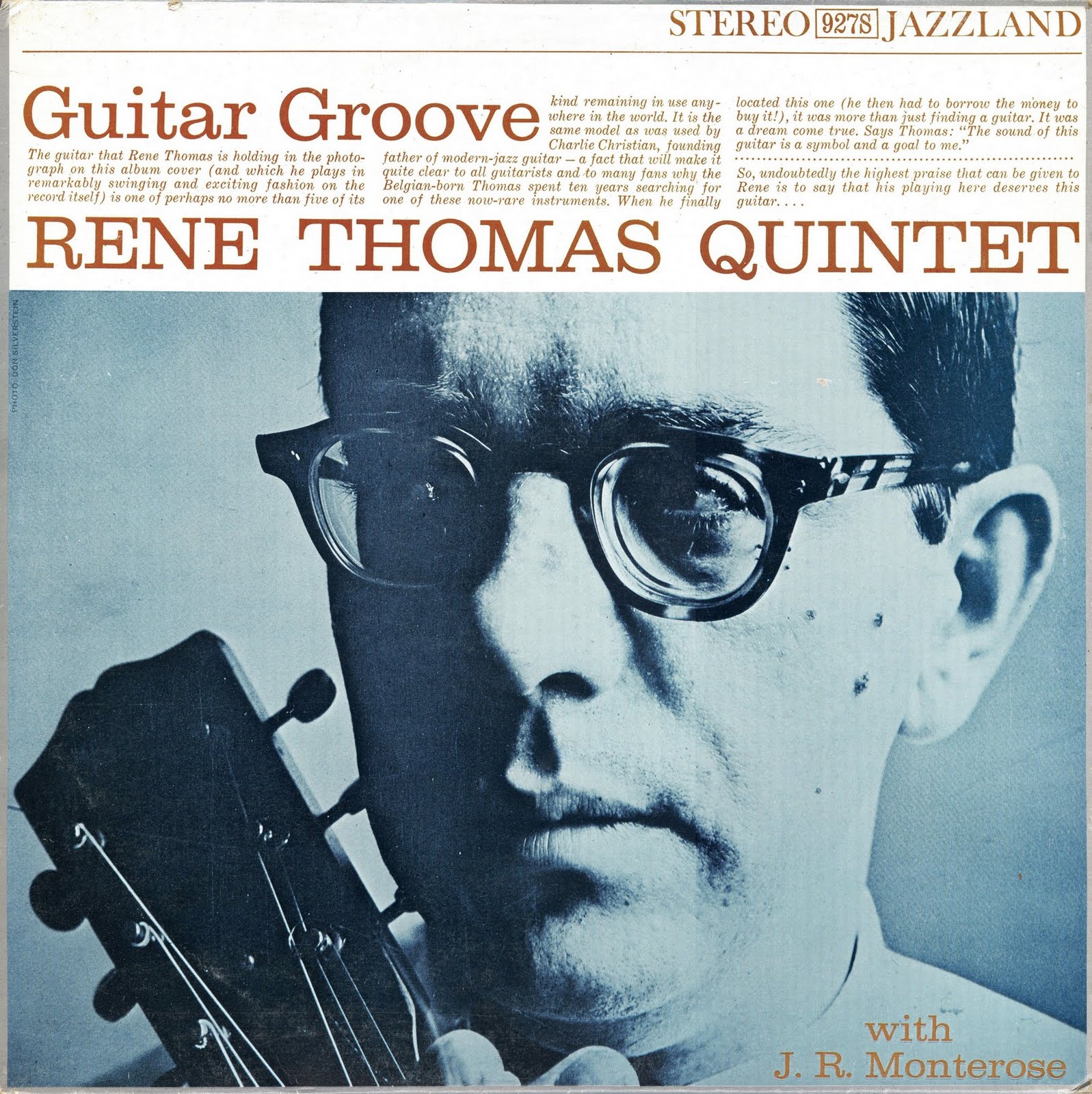 René is God if God exists. Meaning it was never his problem, never a question nor a problem. The problem is of course for the others who live next to. There are very few people how have that natural talent (nature here stands for capicty to choose and understand, and act, not for a given pack of chops, which means nothing in itself). René always played only the right notes, like someone would have filtered out any others in between, all the unnecessary and a bit lose moments in one's playing, to only focus on the burning spots.

He was over human, still its barely not human approach. He developped such a strenght in his left hand, maybe only Freddie Green and other very early players had too, which had for an effect to be able to over-articulate about anything at any tempo. In addition to this, playing an ES 150, Charlie Christian's model, the result was like someone driving a Sports Car In a Crystal Circuit, of course never breaking any but dancing like a ballerina on it. Exhausting for any other hard working student, or listener.


When I started to discover him, I also got the Jimmy Raney Visits Paris Sessions, and there was a rumour around that every player at the time had more or less stolen it from Raney, which was probably not totaly untrue with others, but with René I immediately felt that what he borrowed from Raney was absolutely not a final destination, but just a convenient vehicle.

In fact all I knew from Raney by then were those Paris sessions and some obscure live with Stan Getz, that both didn't really touch me, I preffered immediately René by very far. He was hot, he was alive raw material, like meat that still moves after the butcher passed his knives. With him you had the feeling when you listened to an album, that the track itself was probably just about 5% of what had been played before and after, that there was an endless source of phrases and music here just like a geyser.


My first René record is probably still my top favourite, the Chet is Back! Sessions, with Daniel Humair and Bobby Jaspar, Recorded in Roma 1962. He sounded to me like Sonny Rollins on guitar, so strong and free at once, so affirmative and still totally unpredictable. In fact you could litteraly hear someone thinking live, but from a musical brain and in a musical langage, almost without what we call intellect, that requires the interface of common signs.

Like someone who came to the point where words are only for social needs, and for music, well : music is its own language. Its the problem today often that people try to describe or circle music with non-musical terms, or even inside music, using tools that are more intellectuals than really articulated for playing music (like modes and scales are totally useful but none of it plays music, its just a theoretical object, good for what it is, unapropriate for what it isn't).


I even came to a point where listening to René was getting dangerous for my own devellopement, be it very average. It was just impossible to stand next to such a player, it was quite devastating (maybe Derek Bailey would later be too). Its those people who stand for the whole section, they blind the whole genre in a way, like later say Jim Hall was someone you coulnd't do anyhting with but sit and listen (and cry eventually). I wonder sometime today if I had this with René because it rings a very special string in me, and its the junction of clear massive facts but read under a special background, and a cultural one (nammely being european and more particularly french here).

The same way I felt so into Pat Martino or Tal Farlow but I can see where culturally it will always remain a foreign language for me. You couldn't imagine Toulouse-Lautrec painting what Jackson Pollock did and vice-versa. It has been a question for me since earlier age, if as a french and european student in jazz guitar, there was any possibility to exist not being a parody of largely american music. Of course we had Django and Stéphane, but this was precisely the exception that confirms the rule.


Today I learned to take a good distance with all this. I Love René without any question, but I have very delimited moments where I would listen to him, eventually study him too, but trying not to be completey submerged by. You're dealing with nuclear material here I'm affraid, handle with a lot of care. Fifteen years ago it came to me that It was about time to confornt myself with the instrument he played mostly, the Gibson Charlie Christian ES-150 and its original combo amp the EH-150. So I started a journey looking for one plausible model, and found it.

When it came I couldn't really take it in my hands, I stared at it for very long, this CC pickups acts like magnet for eyes, like an egyptian undeciphered hyerogliph that would contain the magic solution. Its much better now, and I decided to sell that evil-heaven machine since. I could come much closer to how it rides, plays, what it points out and opens, but to me its a way too heavy historical heritage to be able to continue wandering in my own, as it will always be only me playing, and not René certainly.