Luke Schwartz is a composer and guitarist based in New York City.  He has been recognized with several composition awards include multiple recognitions from ASCAP, in addition to New Music Forum (San Francisco) and Queens Council of the Arts (New York).  As the founder of Quiet City—a NYC based composer/performer collective—his work has explored the cross genre relationship between determinate and improvised music. Schwartz received a B.A in Music Theory and a M.M. in Music Composition from the University of South Florida, and has performed with a number of renowned musicians, including Jeff Berlin, Lawrence "Butch" Morris, and Glenn Branca. 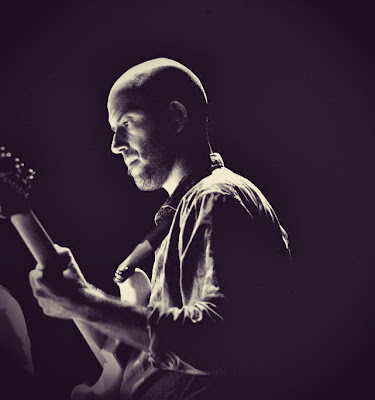 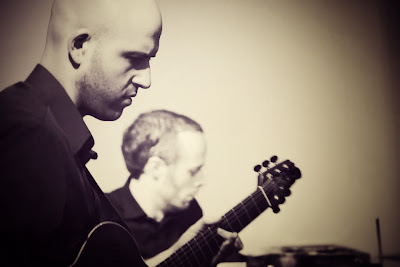 Mr. Schwartz is currently a Music Theory/Composition faculty member at the Kaufman Center, NYC.  Additionally, he has taught Music Theory, Aural Skills, Guitar Ensemble and instrumental music at the University of South Florida and Queens College. He has given lectures on "The Use of Technology in Music Composition" for Florida's Great American Teach In, and assisted in the teaching of class guitar at Countryside High School in 2005 (Clearwater, FL). Schwartz is also currently a member of the teaching staff at the New York City Guitar School. 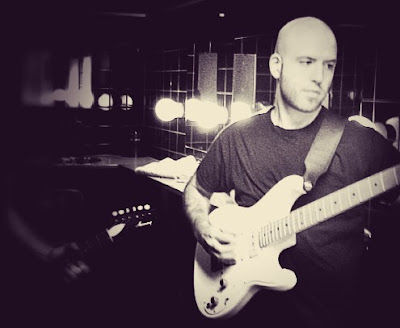 There are two things that stand out in my earliest memories. The first one has to do with the fact that my father is a guitarist. There was always music being made and there were also instruments around. I remember being able to fit inside of his guitar case. When I was this small I distinctly remember playing the open strings of his guitars. I recall using both hands to pluck different combinations of open strings and being fascinated by the different sounds. The guitar neck was taller than me at this point, and my face/ears were level with the sound hole. I would do similar random improvisations at the keyboard, just trying out different key combinations, etc. I believe these to be very important early sound experiences.


The learning process never ends, and I think that the greatest musicians are aware of this and are always getting better at the process itself. Looking back on earlier years I can say that I have gotten better at learning because I understand myself more.


This is another item that evolves with time. It depends on what I am working on. Recently, my practice time is split between working out musical ideas, sequencing those ideas through all keys, placing the ideas inside the context of a composition, and learning new music. I have also been thinking a lot of about permutations of alternate picking direction + string set combinations, and how I can orchestrate various ideas most effectively by using a specific combination in the most appropriate position.


My piece “Open Tangents” (for two electric guitars, vibraphone + marimba, and tape) was the most surprising to me. It was just one of those experiments where I didn’t quite know how it would turn out, but in the end it came together really nicely. Here are the program notes, followed by a link to the piece:

The sonority of the open strings on a guitar was used as the structural harmonic material for the piece. Moments that the players are asked to perform material “obbligato” with tape cues are interwoven with improvisational environments in which the players have freedom to shape various musical parameters through their interpretation of unique musical notations. A mixture of traditional playing techniques with uncommon extended techniques (such as using a guitar slide off the fret board, or playing the resonators and sideboards of the marimba) results in an interesting combination of textural sounds that often blurs the line between electronic and acoustic sources. There is a tape cadenza in the middle of the piece. The players emerge out of this “mellow chaos” and trigger one another as bits and pieces of a composite rhythm are woven together. While the players are asked to play the rhythm that is written, the have limited freedom to choose their pitch material/harmonies.


From day one my father exposed me to a variety of music, including folk, blues, rock, jazz and world music, just by nature of listening to it or playing it while I was around. Throughout my life I have been seriously interested in a many different things, including classical, jazz/fusion, rock, hip hop, funk, etc. The list can go on. In terms of  “secret influences”, I have used many different types of data to compose music. For example, I’ve mined weather data and transformed it into rhythm and pitch material. Recently, however, I just compose music for music’s sake.

Optic Thought (based on various sets of data)


Music is a very important art form that transcends spoken language. It reaches a deeper level of emotional significance than words are capable of achieving. Words are finite to the infinite power of music itself. We CAN live without music, but I believe our lives would be shallower as a result.


I would say the main benefit is that artists are able to get their music out much easier than in the past. That being said, this also waters down the listening market a good deal. Everything is available at everyone’s fingertips, and it becomes much harder for people to make meaningful listening decisions. The artist compensation factor is also a problem. Hopefully a new industry will be established at some point that makes it fair for both the listener and the artist.


This all depends on the type of piece I am working on, which changes frequently. I compose across many different mediums, from classical chamber ensembles to electro-fusion guitar trios. As much as possible I am trying to write honest music that draws upon all of my influences. I love the idea of blurring lines; blurring the lines between electric and acoustic sources, between determinate and improvised music, between performer and composer, between “this genre” and “that genre”,  etc. 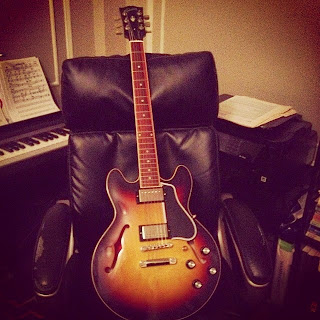 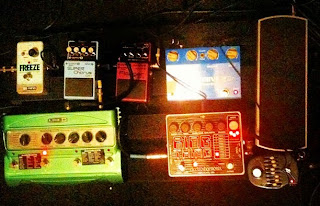 
What special or extrange techniques do you use?

Nothing too unusual. Sometimes I am interested in what kinds of sounds an electric guitar can make “off the fret board”. I might bend a string behind the neck while playing, or strum behind the bridge. I think, at some past point, I have transcribed a pitch set from an alternately tuned guitar strummed above the nut. On that note, Scordatura would be another thing I enjoy.

The main pleasure for me is that a string instrument has the ability to make a single note extremely expressive and lyrical. It’s not that brass or woodwinds, for example, can’t do this, but I believe the quality of a string instrument that allows for pitch bending, sliding, etc. makes for a wider spread of expressive choices. The ability to naturally sustain tones has been a limitation in the past, but effects boxes like the EHX Freeze fix that problem. The challenge for me is to make sure my electric guitar sound retains a high level of organic tone despite my usage of electronics.


This past Fall I toured Germany, France and the Netherlands with Glenn Branca. Getting to play his music in various halls was a very intense sonic experience. Branca’s sense of “overtone interactivity”, if I may, is fully intuitive. Some of the venues allowed for multiple layers of sonic stacking. At times it sounded as though there were angels and demons singing with one another in the rafters (a direct result of compositional decisions made that would produce such overtone clashes, intentionally).


I am currently working in a number of formats in NYC. Hive is an electro-jazz/experimental fusion trio with bassist Ben Kraus and Kyle McCarter. ChuLu Duo is a guitar duo with Michael Heller Chu. I direct a composer/performer collective called Quiet City that has recently included Pat Muchmore (cello), Vasudevan Panicker (piano) and Joe Tucker (percussion). This past October New Thread Saxophone Quartet premiered a new work at Queens College, made possible by Queens Council of the Arts.

Here are some upcoming performances: 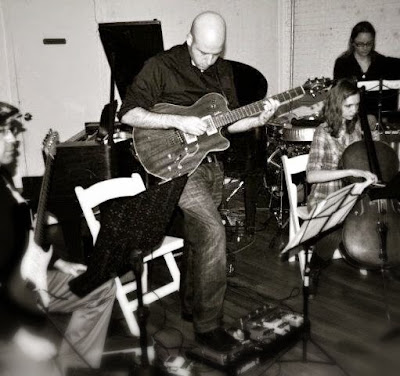 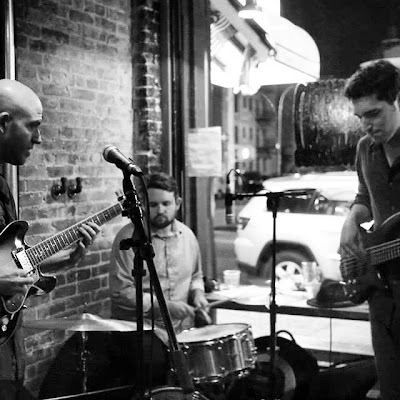