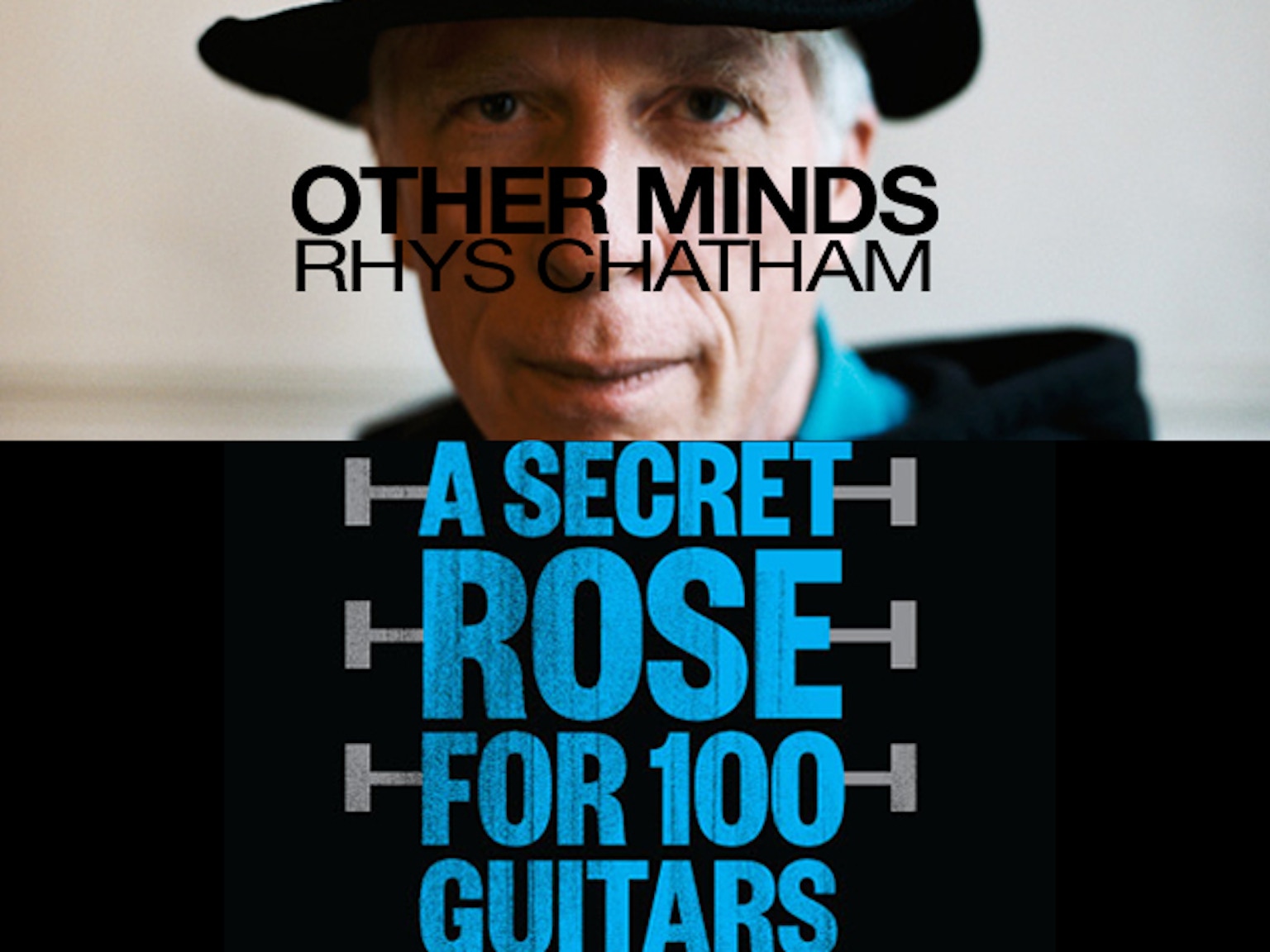 A monumental work based on his 1989 composition An Angel Moves to Fast to See, A Secret Rose will feature an orchestra of 100 electric guitar players from the Bay Area and abroad in the performance of a single five-movement orchestral scale piece at the historic Craneway Pavilion in Richmond, California. Other Minds Festival

Recorded on June 7, 2013 at The LAB in San Francisco, Other Minds presents a preview event for its upcoming presentation of Rhys Chatham’s “A Secret Rose,” a piece for 100 guitars. During this event Rhys Chatham introduces two of his earlier compositions for multiple electric guitars, electric bass, and drums. In his introduction for the first work, an excerpt of “Guitar Trio,” Chatham tells how in the 1970s he was interested in minimalism but after hearing the band The Ramones perform he was inspired by their three cord punk songs to expand his own guitar compositions from one to two chords.

On November 17, 2013, 100 electric guitarists gathered with their instruments and their amps on stage at the Craneway Pavilion—a former car assembly plant situated on the San Francisco Bay in Richmond, California—for the West Coast premiere of Rhys Chatham's "A Secret Rose." 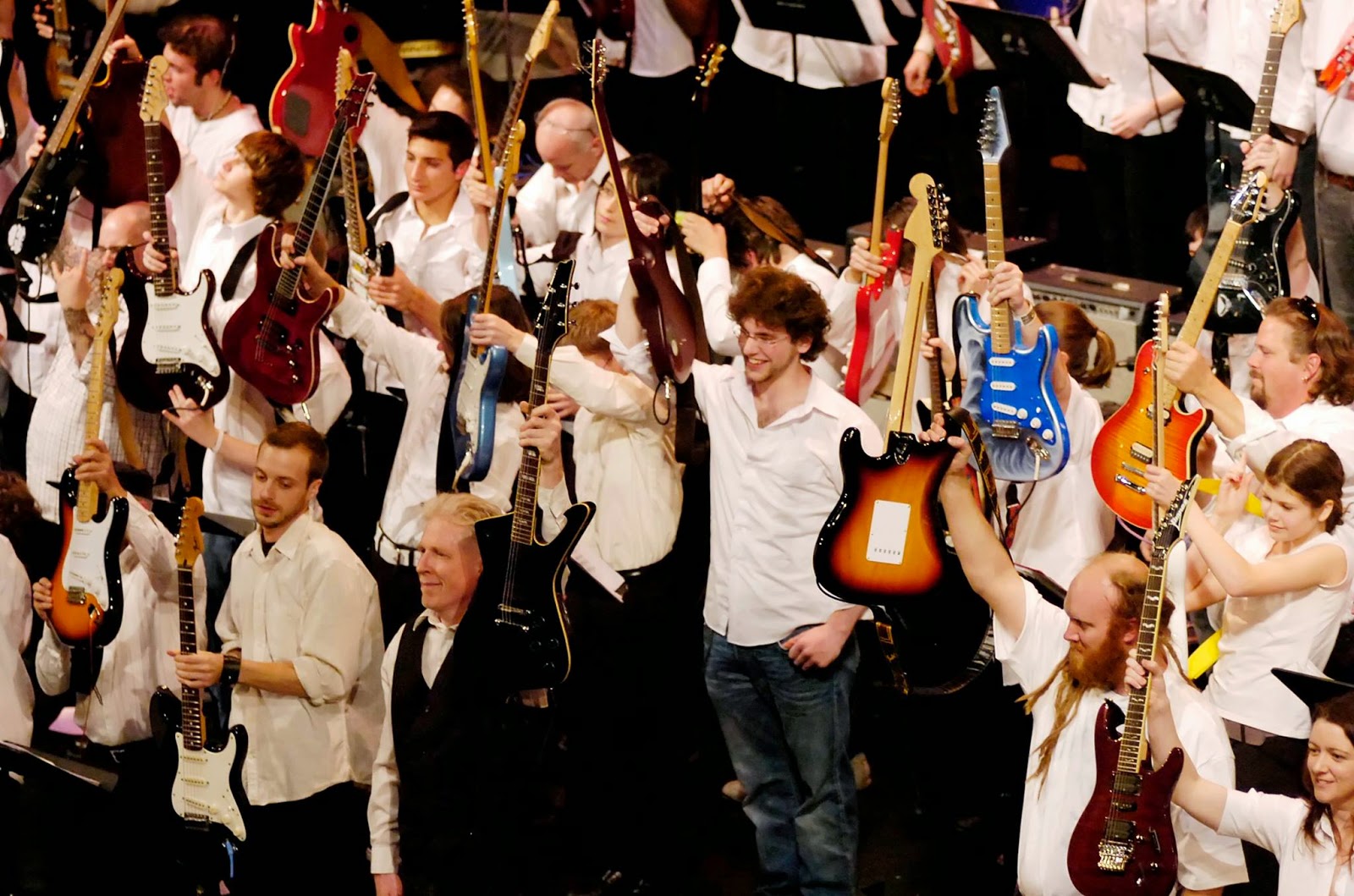 The musicians for A Secret Rose are divided into three groups, each with a section leader (in this case, David Daniell, Seth Olinski, and Tobin Summerfield); each group is further subdivided into two smaller groups. Holding the masses together were Chatham, dressed in a proper suit and tie at the center podium playing the part of the conductor with a baton, and the three section leaders stationed on the sides—cuing, clapping, yelling, fist-pumping, and paper-waving to help keep the train on track. The conducting team was supported impressively by bassist Lisa Mezzacappa and drummer Jordan Glenn, who provided a steady foundation and energetic drive throughout.

Chatham has said, “There’s nothing like the sound of 100 guitars playing quietly,” and he explores this sonority in the third movement, thinning out the texture and having individual musicians play single pitches. Chatham left his conducting post and walked among the musicians, triggering pointillistic mini-bursts of sound as he passed. As the nebula of aleatoric pitches amassed, a giant celestial harpsichord seemed to emerge, with the fingers of the guitarists as the plectra—perhaps unsurprising, given that Chatham’s first instrument as a child was a virginal. New Music Box

A Secret Rose is designed to be performed on a standard proscenium stage.

Rhys Chatham and his production team come to the city of the performance with a bass player and drummer and teach the music of A Crimson Grail to 100 locally recruited electric guitarists. The music is taught over three days, culminating in a performance. See Chatham, section leaders David Daniell, Seth Olinsky, and Toby Summerfield, Birmingham-based rhythm section Laurence Hunt of Pram and bassist Sebastiano Dessaney joined by 100 guitarists perform his mesmerising piece, A Secret Rose, in the magnificent setting of Town Hall. Pictures for Music (1979) by Robert Longo will accompany the performance as visual projections. Whether experienced as spectator or performer, A Secret Rose for 100 Guitars will be a truly awe-inspiring and unifying once-in-a-lifetime event.

Rhys Chatham is a composer, guitarist and trumpet player who altered the DNA of rock by fusing the overtone drenched minimalism of the early 60s with the relentless, elemental fury of the Ramones — the textural intricacies of the avant-garde colliding with the visceral punch of electric guitar-slinging punk rock.

See the UK premiere of his mesmerising piece for 100 guitarists, A Secret Rose, accompanied by live projections in the magnificent setting of Town Hall.

This performance is part of Frontiers Festival, celebrating the music and cultures of downtown New York and Birmingham.
Like a demigod, [Rhys Chatham] set everything in motion and then disappeared, leaving us to figure out how to live in the universe he created. The New York Times