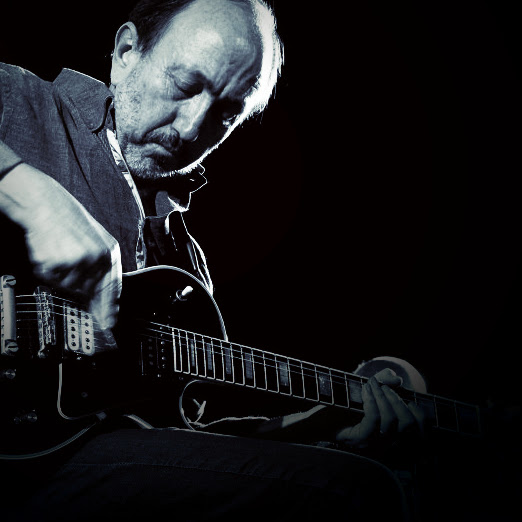 Self taught french guitarist, Frédéric L’Épée’s musical career starts in 1974 founding the progressive rock band Shylock (2 LP for CBS records, since reissued on CD in 1994 and 1996 by Musea records). Shylock disbanded in 1979, but reunited in 2012 to perform in festivals.

From 1984 to 1988, he studies composition, harmony, counterpoint and fugue at the Nice Conservatory, awarded First Prize in 1988. 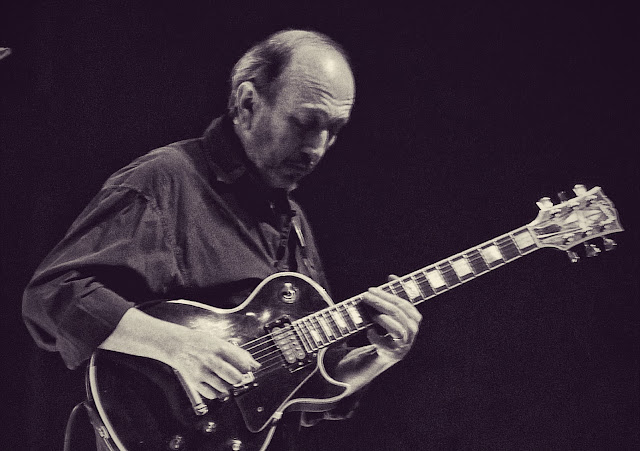 Photo Helaine Burch
Interested in Steve Reich’s works, he founds in 1987 the electric guitar ensemble Philharmonie within which he develops contrapuntal combinations techniques initiated by this composer and record 5 albums for the label Cuneiform Records.

In 2000 he creates, with the guitarist Serge Pesce, the G.L.I. (Groupement de Libres Improvisateurs – Free improvisers group) organizing improvisation performances and workshops. During this period of time, he plays some solo improvised performances in Art Centers as well as solo concerts in clubs and venues around Nice.

After a few years of solo performing, he founded in 2002 the band Yang, with Volodia Brice, Nico Gomez and Laurent James, an instrumental rock quartet which compositions mix guitar counterpoints with a powerful rock pulse, recording 1 CD in Cuneiform Records and  ome more for Yang Music.

From 2003 to 2013, Frederic lived and teached in Paris where he initiated electric guitar workshops in La Cité de la Musique and created in 2008 the band Lobotonics with Peter Lippmann : Voice, harmonica and Moussa Koita : African instruments, bass, guitar. 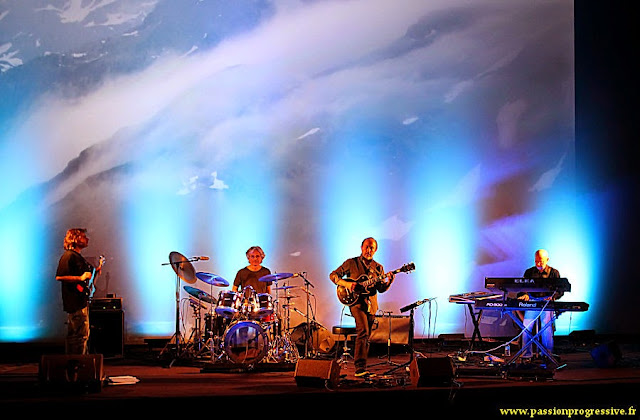 From 2012, he collaborated with the Talip Trio, with Hadger Gülay Toruk voice and Cécile L'Epée saz, adapting Turkish traditional repertoire for voice, saz and electric guitar, and with e – werk, a Berliner e-guitar ensemble dedicated to contemporary repertoire.

He performs, composes and teaches now in Berlin where he moved in 2013.

As a listener, as my father was a violin player, I’ve been in contact with music very soon.

I still have recollections of me in a high chair in front of the family’s big record player, listening to entire records of Beethoven symphonies, Mendelssohn, Tchaikovsky and Brahms violin concertos and others, mainly classical and romantic music. I was an anxious child, and music was the best way to soothe me.

About my first « active » approach: The very first contact with a instrument I was authorized to play with, is with an old piano frame with almost all the strings on it, that lied against the wall of a corridor in the house of one of my parent’s friend. I used to go there very often to spend hours (in my memory) just plucking strings. I think I was between 7 and 9.

I am a self taught musician. I started only having fun to play anything, and trying a lot of different instruments. I wanted to play piano first, but it was not an option. One day, my elder sister bought a guitar, but she stopped playing on it after one week. Then the guitar was there, so I started to find melodies on it. A friend showed me some chords, and I started to play songs.

But I was also interested in other instruments. I played drums, which was a very good enhancement of my rhythmic possibilities on the guitar (I still use my guitar like a drum set sometimes). I also played flute, saxophone and keyboards.

When I realized that finally guitar was my instrument (see next answers) and music my future, I started to practice, alone, but at least 6 hours a day.
Later, I learned Harmony, counterpoint and composition in a conservatory, and composed (and still compose) music for different instruments and orchestras.

I would say that the main pleasure is vibration. You feel it in the fingers, with your body against the instrument, and of course through the air, though it is difficult to have a precise consciousness of that last one.

The main limitation, especially with guitar and plucked instrument, is the decay of the vibration, that doesn’t happen with a bowed instrument of course. That is why I played also ‘long lasting sound’ instruments like flute, saxophone, and organ, on which I plugged a distortion pedal, I was searching for a long distorted sound, and I didn’t now at that time that it was possible on the guitar…

I could talk about several musical works, but the one which finally made me choose guitar was the live version of « 21st Century Schizoid Man » by King Crimson on the live album « Earthbound ».

As I said higher, I was frustrated with guitar because the sound could not last. Robert Fripp's guitar had an infinite sustain and it was the kind of sound I needed.
And by the way, it introduced me to Progressive Rock.

But I must also talk about the discovery of Stravinsky’s Rite of Spring, which gave to my music approach a different twist, and led me to listen to the music of Henry Cow and Fred Frith, who also used long sounds with guitar at that time, and played on his instrument in some completely different ways that what I was used to.

That introduced me also to contemporary music, or say ‘New Music’, which is the other side of my musical life.

I am very sensitive to other arts. But even if a good book, a film or a theater play can move me a lot, I would say that contemporary painting, sculpture, video are disciplines I feel the most connected with. I performed some improvised concerts in Art Centers, and my favourite kind of performance was to improvise during 8 hours at an exhibition.

Painting is like music, most of the time we need more than one approach to really penetrate the work. At that time I was dreaming of an exhibition tower where was showed one piece at each floor, so we can stay as long as we want in front of a painting, move up and down to another floor or not. In my 8 hours performances, the principle was to discover the pieces in the same time than the visitors and improvise. Visitors were invited to stay in the area (fortunately a lot of Art Centers are close to nature) and to come and go . All along the day, my vision and understanding of the pieces change and, helped by music, so do those of the visitors.

I don’t know if you talk about instrumental skills, technology applied to music, or the use of external objects.
I would say that skill is important for me in terms of simply being able to play what I imagine. It appears that sometime my ideas are not that easy to play (I do not always compose on my instrument); so instrumental skills make me available to what comes out of me.

About technology, well, it can be useful, but I try not to be blocked by it.
About objects, I don’t experiment so much, but if I have a sound in mind, I will keep searching until I find the right way to get it.

Mainly my old Les Paul custom with some pedals (2 distortions, delay, volume, and with Shylock, Wah pedal and phaser/chorus). For solo performances I can add an old preamp/multi-effect (Digitech 2112), a Chaos pad and a looper. Sometimes some objects: knife, bottleneck, toothpick, iron sticks. I use also a New Standard tuned ESP guitar and a fretless guitar.

I really cannot say why or when an art work touches me. It can be physical: a sound, a color, a light; or intellectual: a well done and well balanced architecture (of shapes, sounds or words); or ‘meta’physical: something that somehow makes my heart filled like a sail. But I think that in my case, there are no rules.

Maybe I’ve noticed that something that moves me durably has to do with the fact that I recognize some part of me, sometimes even until then hidden, in a piece of art.
Art is supposed to move me and, at the least in a small part, to change me.

After some time, I listen to my music like if it was any music, say, with a fresh ear. But it takes me a rather long time to draw away from it. I don’t like to listen to my work after its release as a recording or an album for example. But the feeling is different when I perform it. It lives!

You have good reasons to worry, but don’t.

Is there a digital music scene? I don’t think that musicians consciously write or play for digital platforms. The evolution of the music market is difficult for me to estimate.

I assume that companies owners are paying close attention to it, but as a musician, the way music reaches its audience will not change the way I make it. Should it?

Some experiments have been made, I think of Björk’s Biophilia for example, but they look somehow futile and with no real consequences.
Chances to sell music, as it is what we are really talking about here, seem to be the same than before. Considering the huge amount of offers in music, it is not so bad.

The part of live performance is now more important that ever, as it is the best way to promote our work now. As well as social medias.
The big change is that if someone is interested in my work now, whether it has been released on a label or not, whether I perform it or not, it is possible to listen to it and to buy it online.

Collaboration with another artist is only possible if I get into some kind of a relationship with that person. Most or the person I collaborated with are or became friends.
The fact that I like the work of an artist will not make me want to play with him or her. I am used to work as a composer, even if Shylock and Philharmonie were collective composition bands, so it is difficult for me to consider being only a player.

Nevertheless I work now in an electric guitar quartet dedicated to New Music in which I play very few of my works.
I would like sometimes artists to appear in some of my songs, but only when I feel that it fits specially to them. In that case I ask them.

The main project now is to finish Yang’s new (third) album. The composition is over, with nine pieces, and we should rapidly complete the demo of the entire album. Then concerts planning, and recording of the album itself.
A new solo album is also almost ready to be release, but I don’t know yet when.

I will soon start to perform my ‘New Music’ solo set in Berlin. This set is made of semi-improvised pieces, compositions and also pieces by other composers: Sidney Corbett, Nick Didkovsky and Steve Reich.
I am working on two new solo pieces for electric guitar quartet, and I hope they will be performed by E-Werk in 2015/16.
I would like to make a new band in Berlin, there are a lot of fantastic musicians here. But it is not yet the right moment. 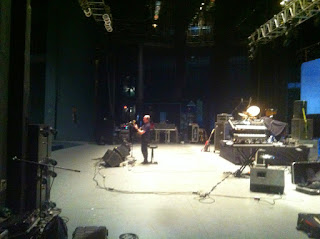 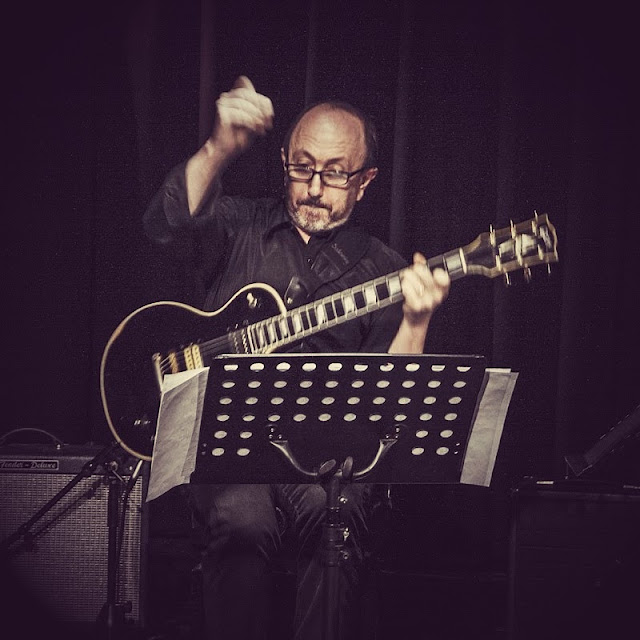