Sometimes in our search for something, we get bogged down with adding more and more to a process. When in some cases, the thing we are looking for calls for us to strip everything away to see that which is pure and honest. Finding joy, contentment and satisfaction by getting back to the basics, like fresh bread out of the oven, a cool drink on a hot day, or in context here, just an artist and their instrument.


A window being opened on a stuffy day, where a fresh breeze rushes in and surrounds you was the way I felt upon first hearing her play. Throwing caution to the wind, and laying herself bare, just a girl and her guitar. But I knew right away, I wanted to hear more.
Young, yet wise beyond her years, her heart is driving her to reach within and grab a hold of that, which causes us to love the instrument and its emotional connection to our soul and thus, to each other.

So sit back and enjoy as we Tune Hear with Alicia Marie Venchuk from Ann Arbor, MI, USA…….. 
BB King was on a PBS special when I was about nine years old. He was talking about his vibrato and how it was like a “butterfly.” To this day, I can still picture the way he moved his hands and how Lucille filled up the whole TV screen. I don’t know what it was exactly, but that made a big impact on me and I got a guitar a few months later. 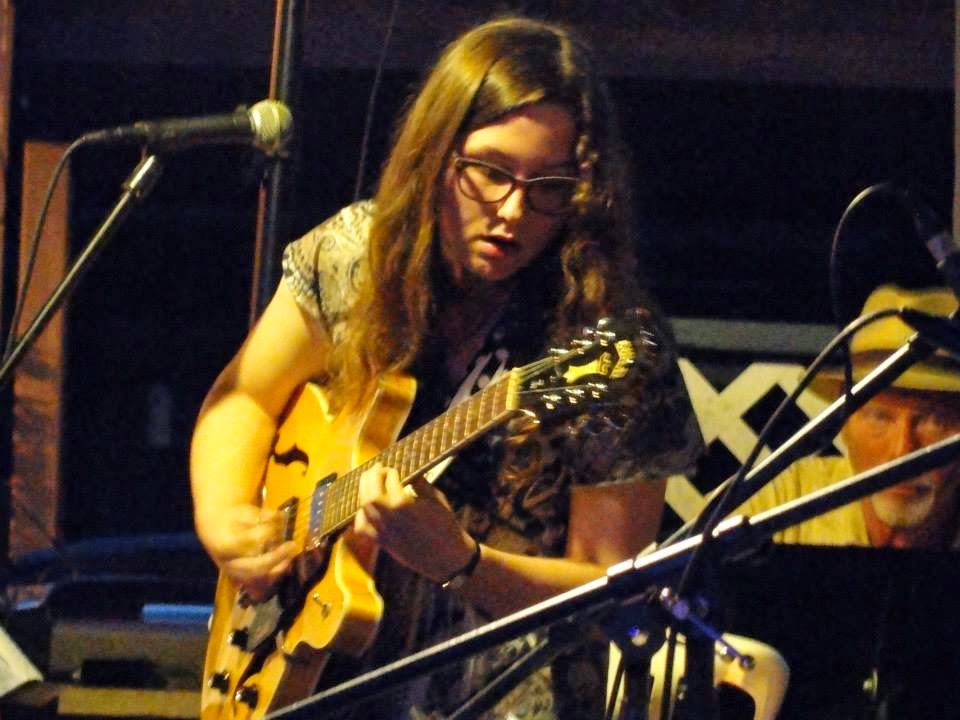 Was there a particular guitarist, other musician, movie, art, sound, life event that caused you to hear music differently?
I  would like to mention two instances. Oddly enough, both of them don’t involve guitarists. One instance that comes to mind right off the bat is the first time I listened to Gene Harris. He was a soulful jazz and blues pianist who was a member of The Three Sounds, and worked with Ray Brown and the Philip Morris Superband. A lot of people have never heard of him, but he is a legend in my book. So, one day I had XM Radio on in my house and Gene came on. I was walking by the radio and I had to come to a complete stop. I froze. That’s never happened to me before.
The next instance was when I heard the Buddy Johnson Orchestra for the first time. They were a swing band that dabbled in R and B as well. They were dubbed the “king of the one nighters” and they were one of the longest running big bands in history. However, like Gene, not many people are familiar with their work. I ended up buying a compilation of theirs  upon my dad’s recommendation after he heard one of their tunes. What a good move! What specifically about that appealed to you?
As a far as Gene goes, I just could not believe what I was hearing. I had honestly never anyone who played that way before: precise timing, dynamics, and powerful bluesy runs. His trills, his smooth yet bold attitude on the piano, his energy...I was truly moved by his performance. His piano playing was directly connected to his heart. For me, he serves as not only an inspiration musically but also as a model for how music can be a direct reflection of one’s inner soul.
The BJO was one of the tightest big bands I had ever heard. Seriously! They were in such unison and their musicianship was out of this world. They had such a fat sound! Their saxophonist, Pervis Henson, just wailed and growled like crazy! I marveled at the way the group could handle complex arrangements such as on the tune A12. I have yet to hear a big band top them. Their sound was so precise and perfect yet raw and thick that I just couldn’t stop listening to them! 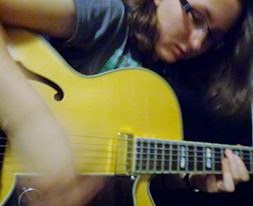 As you were trying to find your way, were there particular sounds or gear that helped you to achieve your sound?
First, I would have to say that I have always been a fan of clean guitar playing. Pedals and effects have just never appealed to me. Even in the beginning, in trying to achieve my own sound, I was always inspired by clean guitar players.  I enjoyed people like BB King, Little Milton, Lonnie Johnson, Charlie Christian, Kenny Burrell, Ron Eschete, and Magic Sam.  Listening to them really shaped not only my guitar tone but my phrasing and style as well.  They put a lot of space in their solos too which appealed to me a great deal.
As far as gear goes, really early on, a Fender Strat or Tele and a Fender Hotrod Deluxe on clean did it for me. Additionally, I would also have to say I owe a lot of my sound to backing tracks. They helped me develop my own sound and voice on the guitar because I could work on my improvisation. I would consistently practice with the tracks. Even after only a year or so of playing, I always enjoyed making up my own riffs and licks. Everything I do is improvised, except for a song’s head or if I am reading chord changes when I comp, and I feel like that is rooted in practicing with backing tracks. 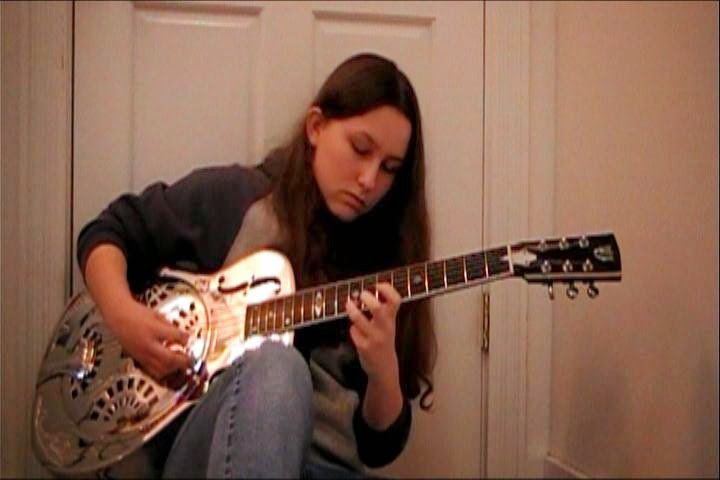 Can you give an example of your work where it (pedal or technique) is being utilized?
Sure. Here’s a version of me doing Green Onions when I was 14 years old at a local Eagles Club. I had been playing for about four years at this point. I’m playing a Tele through a Hot Rod--one of my main rigs of choice during this time, I guess you could say. I do the Green Onions signature lick, but I also do a lot of my own improv in between. I include it here because it is an early example of how I used improvisation, backing tracks (even in live performance), and a clean guitar tone to achieve my sound.

How have you been able to build upon those early experiences to what you’re doing now?
I guess one thing is that I still play clean. In all honesty, I can say with confidence that I don’t think that’s going to change. I just enjoy it too much. However, the kind of tone I like has changed. I really liked trebly tones when I was younger. The tone control was always on 10. Now, however, I enjoy warmer tones, but warmer tones that still pack a punch. I really don’t enjoy playing Strats anymore because I don’t feel like I can get the tone I want. So, instead of getting my sound from solidbodies, I tend to get it from hollowbodies or semi-hollowbodies now. Not to say I don’t use solidbodies, but I haven’t played a strat at a gig in ages. For instance, now, I am big fan of pre-Fender Guilds for their tone and craftsmanship, so I usually use them. For me, they are the ultimate blend of punchiness and mellowness.
Also, I am still very improvisationally based. I always do my own versions of songs. Nothing I do is scripted (except for a song’s head and chords). However, I would have to say my approach to soloing is a little different than it used to be. I used to be very scale based. A couple of years ago though, I did away with thinking in terms of scales. It really opened up the fretboard for me. Now I don’t think about anything really and I just solo. That has really made me a lot more creative.
I also got into another side of guitar playing, blues fingerpicking, about a year and a half ago. That’s something I never thought I would do and now it’s one of my favorite things. I am able to back myself as a solo artist. That is quite a liberating feeling. Plus, I have been delving into the style of old Delta, Texas (Lightning Hopkins) and Mississippi John style blues. That has seriously opened up a whole new world for me. 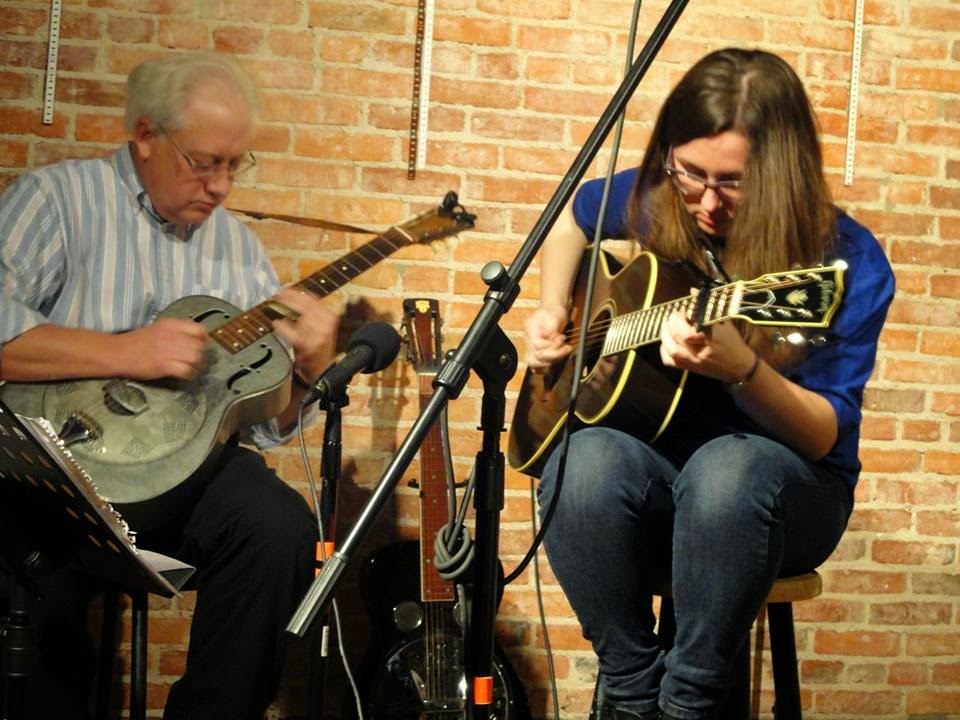 Let’s take a moment to highlight some of your current work.
Great. Thanks! I will include three clips. Here’s an example of the acoustic blues playing that I have been getting into. I love using this old wooden Dobro resonator. It was made in 1930 and it just has a really eerie tone. I am doing my own version of Lonnie Johnson’s Another Night to Cry:

I uploaded this video to Facebook for the heck of it to blow off some steam after a tough semester. The attention it has gotten has been unbelievable and I just can’t believe it! Wow! I include the clip here because I think it illustrates how not working within the confines of scales has helped improve my playing.


This last clip is my work with a band that I am in called RJ Spangler’s Kansas City Six. We pay tribute to the blues shouters of the Southwest. The band has given me an opportunity to play old school swing blues, but I have also had an opportunity to improve my fills, comping skills, and just overall playing ability. This is a clip of us doing Going to Chicago.

Is there a sound you’re still trying to achieve or are you satisfied with where you are now sonically?


Overall, I am pretty satisfied with my sound. I feel like everything is falling into place nicely as I try to progress. In other ways, I could be more laid back sometimes or play different licks here or there. But, ultimately, I am always experimenting, so my sound is always slightly changing, which I like. I like dabbling in many different genres, so my style changes based on what I am listening to, how I feel, what song I am playing to, etc. I like to keep that variety going. 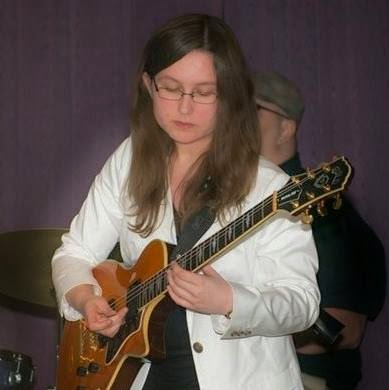 What can we expect to hear from you in the future?
To be honest, I am not really sure. I will always be doing the blues, so that will certainly be part of my future. To that point, I really try to achieve an old school vibe in everything from my acoustic blues to hard bop, so that’s something I’ll keep doing in the future. Maybe some more songwriting and maybe some funk or folk music or another genre I haven’t done much of yet.  Whatever it is, I am sure I’ll have fun doing it! 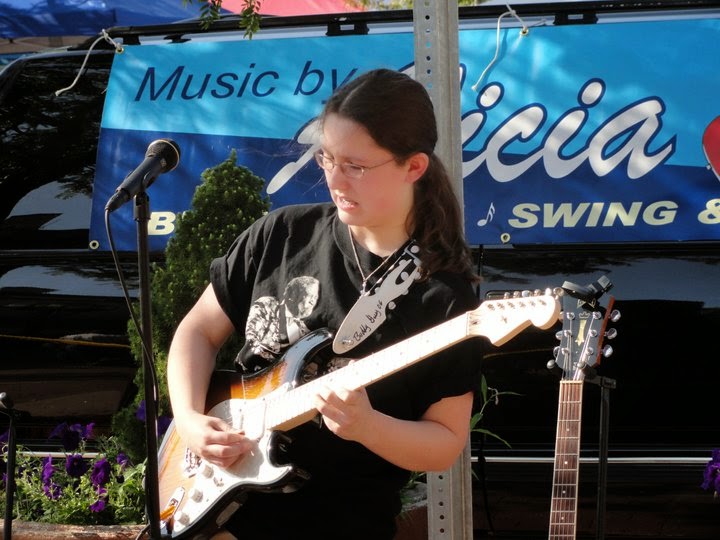 If readers are interested in checking out your work further, where can we direct them?
You can check me out at these three pages:
Facebook, YouTube, and Reverb Nation.

Thanks!
Thank you very much for your time and participation in Tune Hear.
In closing, one final fun question:
If you had an opportunity to ask any guitar player a question, who would it be and what would you ask?
Man, that’s a tough one. Let me see…. Well, you know, I would have to say Memphis Minnie. I would ask her: Do you have any advice for a woman blues guitarist? I’m sure she’d have a lot to say. 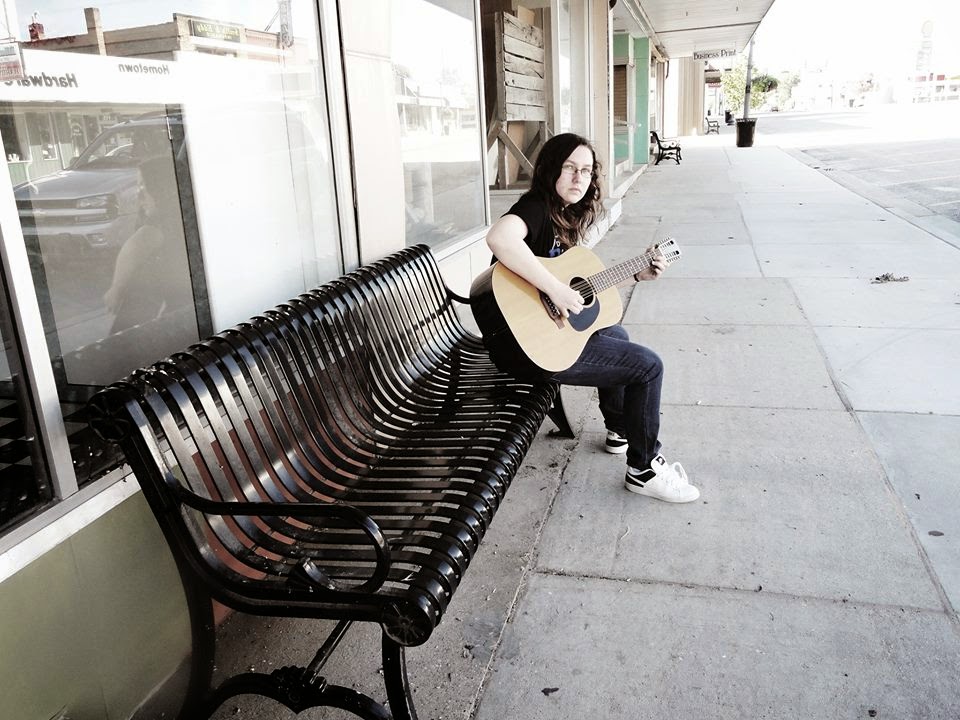