How and Why We Create and Hear Music

What do contemporary music and vibrational communication from plants have in common? Quite a lot according to Larry Polansky, Professor of Music at UC Santa Cruz. As a renowned composer and music theorist, Polansky thinks very deeply about music and wants to broaden the scope of how it tends to be categorized. The impressive list of prominent speakers for the latest Arts Dean’s Lecture Series is a testament to this enormous diversity. From contemporary music composer Christian Wolff to acoustic biologist Katy Payne, who studies whale songs and elephant communication, the series, entitled Music, Language, Mind, Evolution promises to delve into areas of sound that will surprise and amaze.

“It seems to me that there are a number of questions about music that have to be asked in reference to biology, cognition, and evolution,” said Polansky. “I’ve been involved in thinking this way for a long time, and have taught graduate seminars in it in the past. It’s a very important way to think about music, kind of ‘from scratch,’ trying not to privilege conventions of style, particular cultures, what people ‘think music is’ or ‘should be.’ Just keeping a very open mind, and asking, quite simply ‘What is music?’.
When Polansky was putting together the series, his idea was to divide the eight scholars/artists into four groups: language, biology, cognition, and music. He made a list of his “dream team” of eight people he’d ideally want to have participate and, much to his delight, all of them responded “yes” within just a few hours of receiving his request. “I was stunned at how easy it was,” said Polansky. “Scheduling them was quite a different matter!”

“The level of brilliance, creativity and the impact of this group is extraordinary,” said Polansky.
Christian Wolff, who has composed more than 200 works to date and has been musically connected to Merce Cunningham and his dance company since 1952, will be focusing on what the notion of “experimental music means or could mean. He says of the series: “It looks like a very interesting series, [covering] many angles on art issues….Larry Polansky puts together interesting and unusual projects.”

Acoustic biologist Katy Payne has spent decades doing field work in oceans, savannas and forests, which has led to her pioneering discoveries of elephants’ use of infrasound (sound below the frequency range of human hearing) and long-distance communication. She’ll talk about her work with elephants and illustrate the changing songs of humpback whales, giving insight to their complex and beautiful sounds that are evidence of creativity in a non-human animal.
Composer, bio-artist Douglas Repetto, who also founded the “DorkBot” movement, which made him internationally renowned in experimental arts, says, “My talk will be on two recent artworks I’ve made. They’re both part of a series called ‘forever wild’. The first is ‘forever wild (nest machine)’ and the second is ‘forever wild (kill site record)’. I'll talk about the idea behind the whole series, a few of the pieces I hope to do in the future, and then I'll spend most of the talk on those two specific pieces.”
“The lecture series is such an interesting mix of people and backgrounds,” he continues. “I'm honored to be part of it. I wish I could go to all the talks! Grouping music, language, mind, and evolution is a brilliant idea, and provides a nice frame for a broad discussion of deep topics that are tangled in often non-obvious ways.”
The free, public lecture program is also part of the course Music 007 and will take place Mondays and Wednesdays, 5-6-45 p.m., in the Theater Arts Center at UC Santa Cruz beginning on Monday, April 6. (All majors and class levels are welcome, and the course satisfies the IM General Education requirement.)
Past Arts Dean’s Lecture series also have covered a variety of cutting-edge topics, including New Queer Cinema (2014) that included talks by Dustin Lance Black, Oscar winning screenwriter for Milk, and Engaging the Mind (2013), which featured trailblazing game designer Will Wright, creator of SimCity and The Sims. 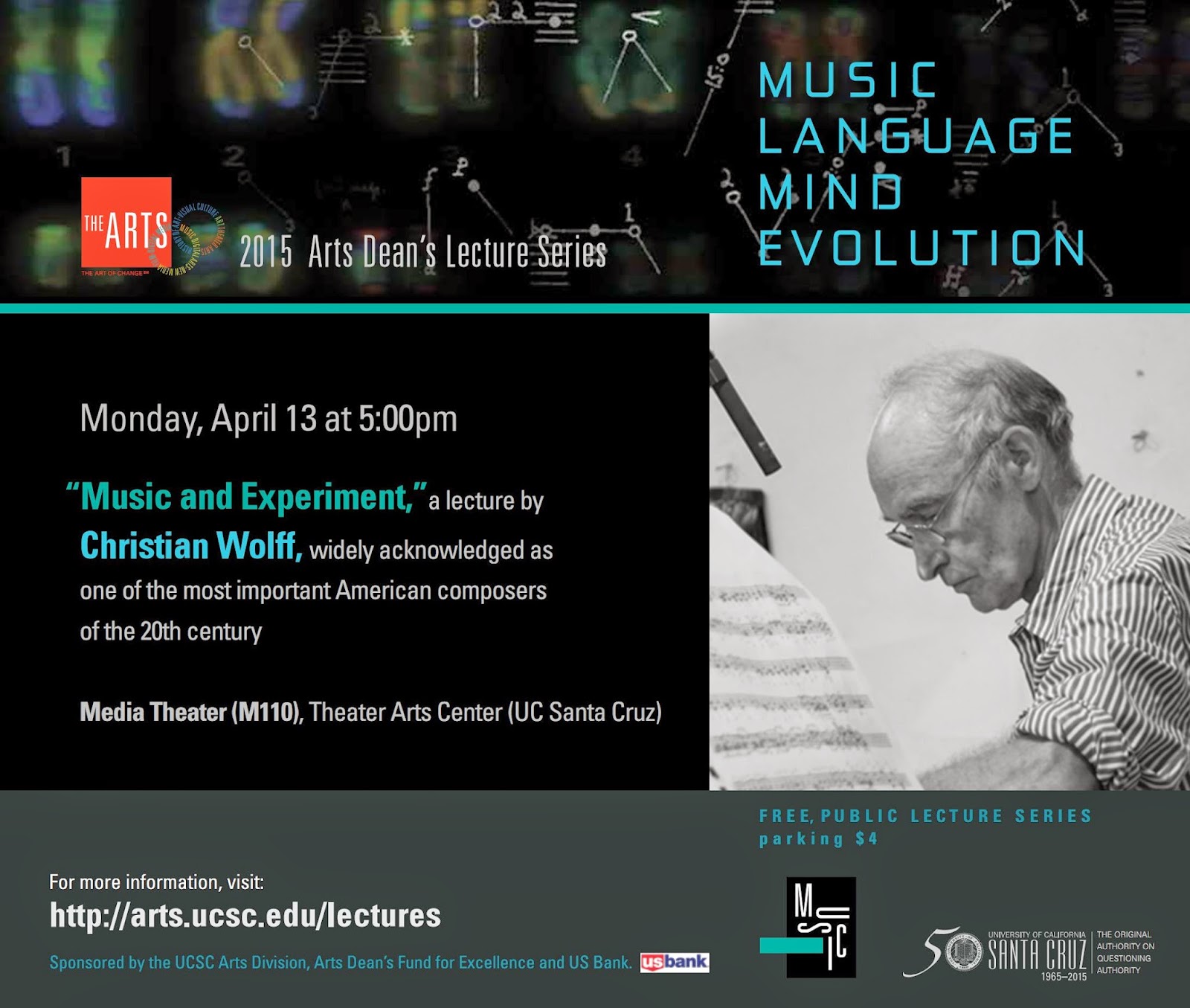 Monday, April 13--Christian Wolff
Music and Experiment
Widely acknowledged as one of the most important American composers of the 20th century.

Wednesday, April 29--Thalia Wheatley
Why Music Moves Us
Cognitive scientist, leading researcher in the nascent field of perception of emotion

Monday, May 4--David Huron
Investigating Music's Origins: Making Use of the Pleasure Principle
Pioneering and pre-eminent scholar in music cognition and cognitive musicology

Wednesday, May 27--Aniruddh Patel
Hidden Connections Between the Evolution of Music and Language
Cognitive scientist, author of the major and innovative work Music, Language, and the Brain