Its pretty hard not to like John Cage the character, I think. And a huge part of his presence actually comes through great interviews, films, anecdotes and spoken words. This is him, and his music is the same way totally him. But if this helped his message at all (?), is a more complex question though. I started to play other people's music because I guess i'm totally disable to play anything else than my own (own ways, at least). Its not a choice or anything, its a fact. Playing music is about how much you accepts facts (technical ones, inclinations, past and present history, geographical facts too, familial ones, many many other ones, but facts). And I don't have any other options but accept those facts, so I did go where they all and each of them took me. Its very nice places to be. John Cage and other new composers, in a way, became huge clichés since their original creative moments. But this isn't negative at all, its often been the case though history, its a great sign that those ideas got totally socialized, accepted and sre fully public now. The specifity of Art is precisely that it absolutely require to be universal and not hold as some sort of Graal by a closed group (mostly to bang on other groups practically). Everyone refers to John Cage today even when negatively. No one would find bizarre that Beyoncé or Gaga mention Cage (and not Nicolas). Much more people recognize Woody Allen, Marquis de Sade or Casanova than actually did read or seen their works. Its what created the now very common “Cageian” word. I once had a review in the french Jazz Press about my “Rien” album, that ended up by “For Cage Fans Only”. And you didn't need to know Cage's music to understand the point.


There is only one piece of John Cage I ever found totally playable to be honest and that is his “String Quartet in Four Parts” (which happens to be also Four Seasons). I've tried since quite a lot of other scores, deliberately leaving aside all the too graphic ones, or texts only, or intructions to DIY the whole piece. I took where most standard notations were perferably, which clearly divides quickly into instrumental music (of course Piano often coming first, but as time went often strings too). In this corpus of works I often felt that to be totally intuned whith his own ears and desires, he was totally missing in the room. Another very obvious example for long (it seems to be changing lately), were the albums that he was present during the recordings, eventually somehwere conducting the sessions (not too hardly I guess) very particularly for me two kinds of : The works with David Tudor, and later the Arditti Quartet or Solos Series. Maybe for me this incarnated feeling only comes back with the late Europeras, but they also are a sort of goodbye, someone preparing to leave this world, things you'd like to not forget to say before you pass away.

I never really got into “Silence” (the book) but his “For The Birds” was really totally thrilling when I first read it with 15 or 16. Although you could always say his books were very musical, they weren't really about music at all for me. He was more like the kind of uncle or teacher you'd love to have. Deep and Light at once always. Funny and serious, more really funny than really serious I always felt. And I know it will again shock some but I always asked myself if he actually was exactly a musician, a composer, or maybe just someone very sensitive and a free mind.

Sometime I thought he might have suffered a lot before to get there. Or was too aware to try, or else deeper roots that leads one individual to such roads. I still don't really know today still. I can often still think that he has been able to do all he did because he wasn't too much of a composer in the traditional sense. Like free of duties, that were so heavily weighting on all other european composers at the time (Darmstadt). I don't judge in fact, it doesn't matter at all. What matters is that he did what he really wanted, that's all matters in one's life, go to the point and let others discuss whether its blue or yellow.

Probably like others before (Jacques Lacan, Thelonious Monk, Gramsci, Jesus or el Che) he also brought them Leper and other really bad epidemies. Because deeply his music is about being and not about playing to be. I don't think he cared too much about interprets musical and techical problems, but about how they felt in their lives rather. You need a strong level of empapthy I guess to play his music, whereas you can really dislike Mozart and enjoy playing his works. Maybe Cage's message is exactly that the answers to all yours questions are inside yourself already, and he just offers an nice and open frame for you to start your own journey. Its a lot of maybes I know.

I meant by Leper the fact that after him all sorts of people took if for granted ans started to preach and sit on what Silence is, and doing so just rolled over the original message (they always do, that's what the Bible is all about no?). A world with an extra totally different character will always be a better world for me, so his presence is absolutely wanted and acclaimed. Do you actually often listen to any John Cage albums yourself? I don't think many do in fact, and that's also fine, that's maybe also what he intended. 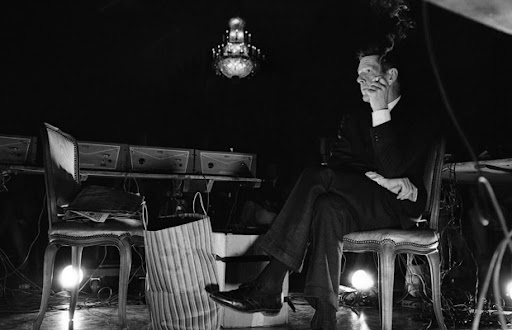 Reading and recording all sorts of scores at the moment, including recently so called “Contemporary Music” (Which for most dates back to the 50's and 60's, I don't why they kept that term, just like “free jazz”), helps me approach certain aspects of writing in fact. I always doubted that a composer writing say a Quintuplet of demisemiquaver (32nd th ) at a fairly up tempos, wanted to hear the actual result. That's writings that address to other group of people, eventually to political and social conventions, but hardly to really playing music I think.

Its interesting to see how each of them writes music, between Cage, Stockhausen, Kagel, Feldman, or Ligeti. It says a lot about their times I guess too. A lot might need a revision in the future. Is Music about the text or the sound it produces? Contemporary music still fascinates a lot of people for this that its truely impossible to read through for most. Its known to be a high value, a very serious work next to scientific works, but most have no idea why nor what. Maybe part of Cage's message is in his texts as well, in the way he put it. The way he always very precisely writes what needs to be, and opens poetical windows everywhere else he can.