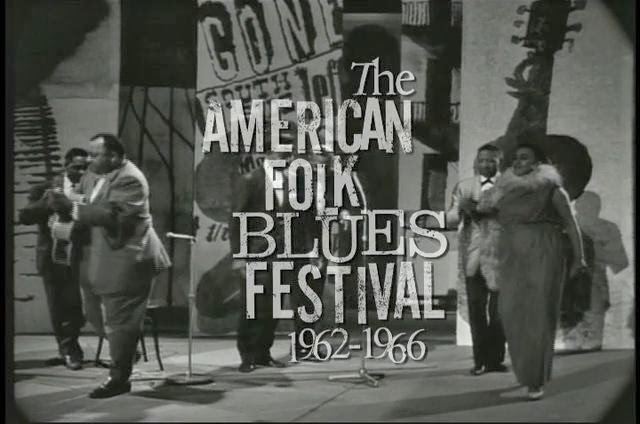 The American Folk Blues Festival was a music festival that toured Europe as an annual event for several years beginning in 1962. It introduced audiences in Europe, including the UK, to leading blues performers of the day such as Muddy Waters, Howlin' Wolf, John Lee Hooker and Sonny Boy Williamson, most of whom had never previously performed outside the US. The tours attracted substantial media coverage, including TV shows, and contributed to the growth of the audience for blues music in Europe.

The American Folk Blues Festival 1962 1966
German jazz publicist Joachim-Ernst Berendt first had the idea of bringing original African-American blues performers to Europe. Jazz had become very popular, and rock and roll was just gaining a foothold, and both genres drew influences directly back to the blues. Berendt thought that European audiences would flock to concert halls to see them in person.
The American Folk Blues Festival 1962 - 1966
Promoters Horst Lippmann and Fritz Rau brought this idea to reality. By contacting Willie Dixon, an influential blues composer and bassist from Chicago, they were given access to the blues culture of the southern United States. The first festival was held in 1962, and they continued almost annually until 1972, after an eight-year hiatus reviving the festival in 1980 until its final performance in 1985.

The concerts featured some of the leading blues artists of the 1960s, such as Muddy Waters, Howlin' Wolf, Willie Dixon, John Lee Hooker and Sonny Boy Williamson, some playing in unique combinations such as T-Bone Walker playing guitar for pianist Memphis Slim, Otis Rush with Junior Wells, Sonny Boy Williamson with Muddy Waters. The Festival DVDs include the only known footage of Little Walter, and rare recordings of John Lee Hooker playing harmonica.

The American Folk Blues Festival 1962 - 1966
The footage of the musicians in the tv studio is sometimes undeniably hokey – they play in sets made up to resemble houses, rooms, porches and parlours of the American south, while at other times they play in front of large photographs of the same. The introductions can be awkward too, as each musician introduces the next on set, but for all that, this is a goldmine. Here are just a selected few of the highlights.

- Big Mama Thornton from 1965 walking on stage with her flowery handbag after an introduction from Buddy Guy and then belting out Hound Dog, with which she had a hit in 1953, three years before Presley’s version unjustly eclipsed her own. This is stirring, exciting music with Buddy Guy accompanying her on the guitar – the first time they had played the song together apparently.

- The two Skip James recordings from 1967, All Night Long and Crow Jane, in which his voice is strong and his fingers agile.

- Son House playing Death Letter Blues from 1967. It was often said of him that he played as if his life depended on it, and this rendition sends a thrilling shiver down the spine. Paul Oliver wrote that his hands shook from ague and many in the audience feared that he wouldn’t be able to play, but as soon as he did, he – and they – were utterly transported.
American Folk Blues Festivals 1963-1966: The British Tours

- Anything with Sonny Boy Williamson is a highlight as he is such an amazing presence (Paul Oliver described him as looking like ‘the Grand Vizier in a pantomime’), with his laconic delivery poised between humour and an edge of danger. However, his tracks with Hubert Sumlin and Sunnyland Slim on Vol 2 and his performance at the Fairfield Hall in Croydon, where he appears with briefcase, bowler hat and umbrella, are priceless.

- Howlin’ Wolf singing Smokestack Lightnin’ on stage in England in 1964.

- The nimble-fingered guitar playing of Matt ‘Guitar’ Murphy in 1963, and Earl Hooker (playing with his teeth) and Magic Sam, both in 1969.

- Junior Wells carrying along a whole clapping audience in London with a jitterbugging performance of Ray Charles’s What I’d Say.

Attendees at Manchester in 1962, the first ever venue for the festival in Britain, included Mick Jagger, Keith Richards, Brian Jones and Jimmy Page. Subsequent attendees at the first London festivals are believed to have also included such influential musicians as Eric Burdon, Eric Clapton, and Steve Winwood. Collectively these were the primary movers in the blues explosion that would lead to the British Invasion.