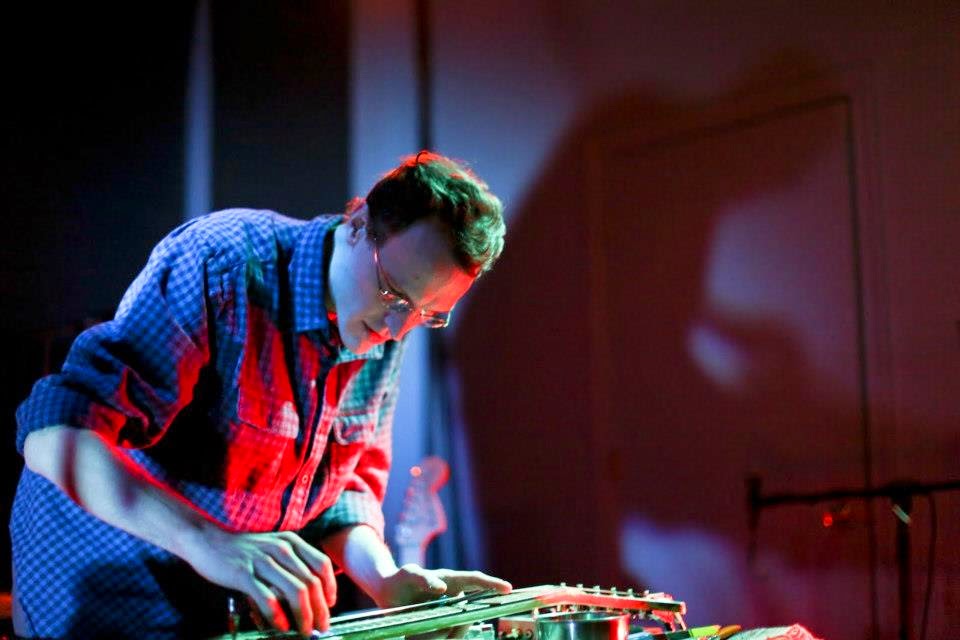 Reid Karris is a multi-instrumentalist, composer, sound experimentalist and improviser hailing from Chicago, Illinois and trying very hard to get all the music stuck in his head out for all the world to hear. After spending years as an odd guitarist trying to fit in with the world of rock music he shifted his focus towards improvisation and noise.

His primary instruments for doing so are prepared guitar and drum kit sent through electronics. With guitar he performs solo and with various groups including Set Self on Fire and HKM Guitar Trio. He also plays drums in the experimental duo Step Slow.

* For most purposes my set up involves two guitars going through a single signal chain. One guitar is table top while the other is on a strap. They both go through modulation and two delay/looping pedals before going through an old Japanese analog delay and a memory boy, both of which are kept on the table for easy access. While I’ve enjoyed playing table top guitar for some time I like the options left open by also having a second guitar on a strap. The table top guitar is an explorer body style from some unknown make and the shoulder guitar is a fender telecaster deluxe. I’ve always been partial to the Gibson electronics set up.

* I use a lot of different preparations on both guitars. For the most part the preparations for each differ due to their positions but in general preparations fall into categories like things that go under or over strings and things that attached to the string or lay on top of them. These can be a whole manner of things and I usually find it quite hard to go into a hardware store or an art supple store and not find something to use as a preparation.  I also use a variety of things to activate the strings such as a bow, e-bow, milk frother and various metal and wooden dowels. I’m always on the lookout for new things to try and add to the arsenal.

What’s the relevance of technique in music, in your opinion?

* I’m very interested in extended technique, particularly how it applies to improvisation. I think that unconventional playing styles can give a musician a vocabulary that is truly their own. It’s all about choices that a player makes and the idea that anything is really possible. I apply a lot of the same philosophy I have for prepared guitar to my drumming as well and use contact mics through effects and loops and use a good deal of extended techniques for percussion.

* I can remember banging on stuff as a kid and setting up make shift drum kits with pots and pans in the kitchen and banging out rhythms on school desks. In fourth grade my school offered lessons and I choose trumpet, which I played through high school. I started guitar in seventh grade and mainly played speed/thrash metal since that’s what I was listening to at the time. I took lessons for quite awhile and spent a lot of my time figuring songs out by ear with my teacher.  In my later teens I started listing to stuff like Sonic Youth, Beck and Radiohead and getting into jazz like Miles, Coltrane and MMW and as my listening expanded I also started messing around with alternate tunings and feedback. There was a lot of self teaching and trial and error during that period which set the foundation for future experimentations. The learning process never ends really, you’re always a student of sound if you’re willing to listen.

* I grew up in the 80s and can remember a lot of music all around. I had two older siblings who were in high school in the late 80s and I can remember getting exposed to a wide variety of musical styles. While I don’t remember any one thing that made me think “I want to be a musician” I find myself to have been always interested in sound, and not just sound that is considered to be something we call music. I find that I have more sound experiences as time goes on, particularly those in nature or sounds of manmade contraptions and I always love when those two things go together, like birds singing along with an a/c window unit or something. I also definitely think that having children opened my ears up to a more chaotic outlook about sounds and I don’t think it’s a coincidence that I moved more in the avant direction once they came along.

What is your is your relationship with other disciplines such as painting, literature, dance, theater, etc?

* I’ve never been very artistically inclined, at least in terms of drawing or painting. I’ve always enjoyed using materials and making collages and such as well as pictures. I see most art as being similar in the concept of creation. We take a medium and through some sort of technique create something that wasn’t there before. The art isn’t a single line or brushstroke but rather the image as a whole. A camera creates a negative and then a picture is made or how in order to create a print the artist creates a plate. 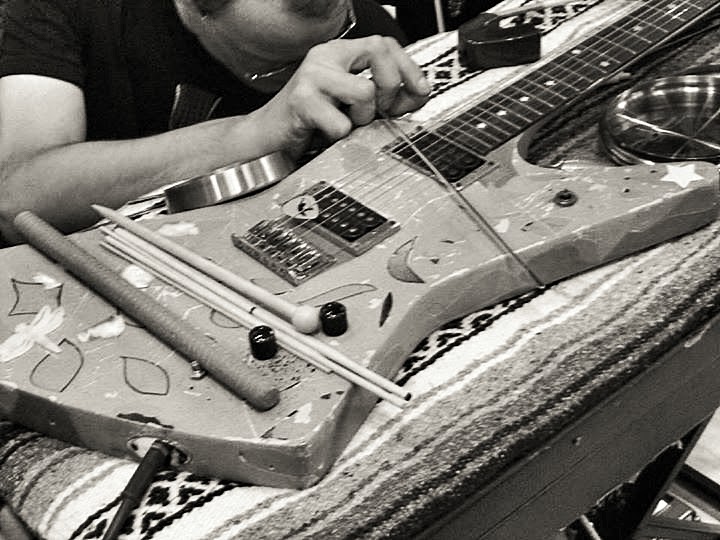 ** This carries over into music as well since the act of making a guitar string or drum head vibrate isn’t the sound, the sound is shifting air pressure and more of a by-product of the process than a direct effect.  I also see dance and theater to be almost another step forward from this idea and bringing the ideas of a work into the present reality of an individual who is experiencing it. In this way a book might be looked at as being similar in concept to recording while a play would be a live performance.  I don’t often get to work much with dancers but I really enjoy it when I do. It always surprises me how it’s never what I expected and always better.

* I enjoy art that makes me want to not look away and then think about it further after I’ve walked away. I think a good movie is one that, while it might only last two hours, has stayed in my mind and occupied it for far longer than it’s playing time. The same is true with music or images that stay with you and creep their way back into your mind. I always find it amazing too how you can stumble upon art in any medium that goes along with exactly where you are at that moment.

* My most recent albums all deal with abstract questions I kind of ask myself about music. I like to think of them as sonic examples of how greek philosophers and scholars would write books on a particular subject.  I very much believe in the spirit world and how music and art in general, is a way for those in the physical world to commune with the spirit world. I think that inspiration and artistic direction, the kind where even the artist doesn’t quite know where what’s going on is coming from, has a lot to do with the concept of how energy cannot be destroyed. It’s just hanging around basically waiting for a way to translated back into the physical world through some sort of medium or sound or act of creation. It’s happening all around and doesn’t even have to be a person making a painting or playing an instrument. It’s as simple as the sound of wind through trees or the colors of a sunset or really anything that we perceive.

* For the most part I like to listen to my own music in moderation. When I’m working on it there’s always a “big picture” idea that existed before the project started to take shape and changes as it progresses but when the process is actually going on I find that I’m focused on a particular part and it’s not until later that I can actually experience what happened from a listeners viewpoint instead of a critical one. It’s nice to be able to hear all of the parts and sounds together without having to have some of them only being in my mind. It’s like being able to sit back and actually hear the music and sometimes it’s similar to hearing the music for the first time.

* I recorded an album called Ambiens Sonitus that incorporated a lot of field recordings. The name is latin for ambient noise and deals with the sounds  we hear day to day that are both natural and manmade. The field recordings were then blended together so create a long foundation track which I used once the way it was and used a second time in reverse. I then composed an arrangement of sounds from guitar and percussion to record over the two background field tracks. The overall sound feels much more drawn out then a lot of my other work which I think gives it a darker feel then other recordings.

Which work of your own are you most surprised by and why?

* The last album I released consists of a bunch of improvised duos that I did with myself. I started by recording a bunch of short tracks using a modified and prepared autoharp and then overdubbed drum tracks. The preparations changed slowly track to track as did the percussion used, particularly snares, bowls, bells and sticks. The track order on the finished product was devised at random and I was surprised how well the pieces flow together on the finished product.

* I enjoy today’s digital music scene because it makes music more accessible.  At the moment I’m not trying to make money off the music I record and it’s not really about that anyway. I don’t often see creating music as a choice as much as something that just has to be done. I release most of my experimental music through a free net label and I like the format as well as the other people’s music on the label. It’s really about findings people whose stuff and outlook on music you like and then branching out from there.

* In a live performance sense I like to try and stay busy with the guitar. I perform solo but also enjoy getting to play with people I don’t know or just haven’t played with before.  I play guitars in an improvising quartet called Set Self on Fire that’s rounded out by drums, keyboards and cornet. I see the group as something along the lines of Sonic Youth meets Bitch’s Brew. We have some great recordings that need something to be done with and I’d like to book the band much more often than I’ve done in the past.  On the recording front I’m working on a follow up of sorts to Ambiens Sonitus that will involve birdsong and insect samples as the foundational tracks which are manipulated into layers and phasing. I also recently finished a graphic score which consists of twelve one minute miniatures. The piece is geared towards extended technique guitarists and the idea is to get a number of different players to record the score.  I am also a drummer and have things going in that direction. I play in a improve duo with the keyboardist from Set Self on Fire called Step Slow which is kind of like free ambient drone or something like that. 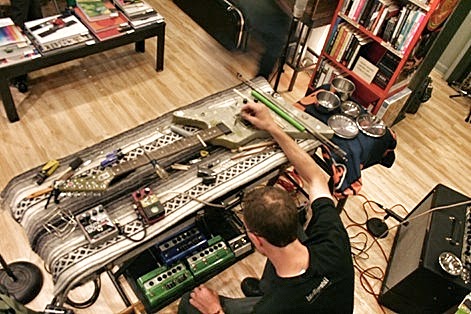 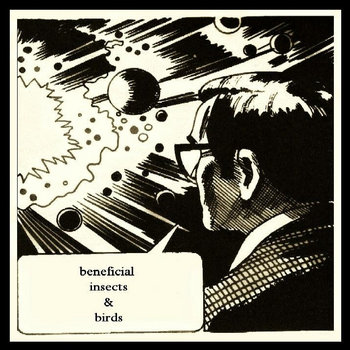