Bartók: Smarter than math-rock —and way more violent.
My Bowie fandom is second to none. Yet I’ve always felt a vague sense of disappointment that the Spiders from Mars didn’t really sound much like spiders from Mars.


On the other hand, the fourth movement from Béla Bartók‘s Fourth String Quartet really does sound like Martian spiders — assuming the critters in question had been force-fed a diet of chord clusters, mathematics, Hungarian folk music, and some of the most astonishing counterpoint this side of J.S. Bach.
And dig it: This white-hot blast of dissonant modernism was composed in 1928!
And how does this string quartet music sound on guitars? Awesome, IMHO — largely because the movement is played entirely pizzicato (plucked, not bowed). Very few modifications were needed to adopt it for four electric guitars.

This is the same piece I used as a case study while trying to learn Notion’s notation software. I wrote about my first brush with the software here, and my subsequent experiences make me an even bigger fan. (That post also includes a link to the score of my guitar arrangement, so follow along at home, readers!)
Attentive viewers will notice that my guitars aren’t plugged in — just like on Top of the Pops! Yup, I’m “fret synching” for the video, though the performances are pretty darn close to what I play on the recording. I used a Fender Bass VI for the cello part. I picked the Guild archtop for the viola because it has a warm, rather dark tone. My Trini Lopez covers the second violin. The one fake-out: I actually played the first violin part with my Hamer 20th Anniversary, not the Hello Kitty Strat. But, well, you know. The amps and reverb are digital.
Some fun Bartók facts (plus some not-so-fun ones):
While dissonant, Bartók’s music is never atonal in the way Schönberg’s later works are. He was more interested in stretching and expanding tonality than overthrowing it. In this piece, there’s dissonance within the individual parts, and dissonance between the parts. Consider some of these chords plucked at random from the score: 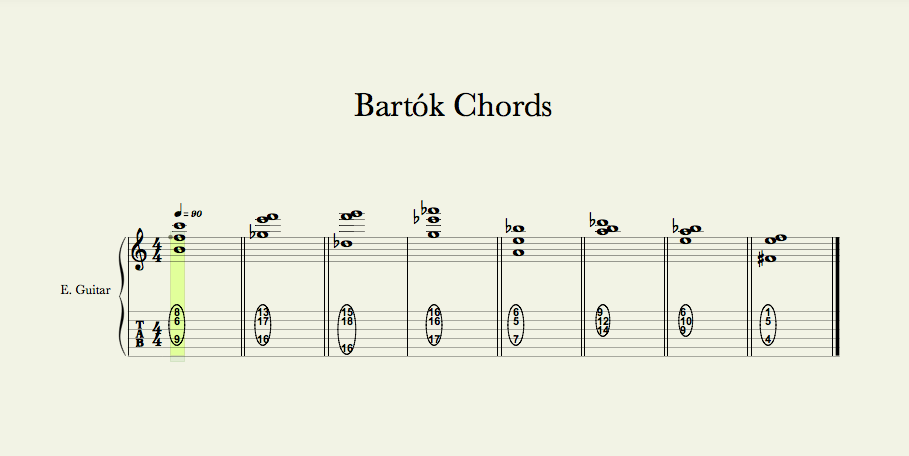 Mmm — crunchy! Since violin, viola and cello only have four strings each, none of the chords in this piece have more than four simultaneous pitches. But dang, they’re dense.
Much of the tension here comes from stacking such chordal structures on top of each other. Try recording any of the harmonies above, and then double it with the same chord a half-step above or below. That happens often in this piece.
You may notice I’m reading from my iPad. This is the first time I’ve used it extensively as a music reader, and I’m hooked. I’m using forScore, one of several cool PDF-based score readers for iPad. I’m switching pages with a PageFlip Cicada, a pedal that communicates page-turn messages to the iPad via Bluetooth. (It works great, but it’s made from cheapo plastic, ill-suited to a clumsy, lead-footed player like me.)
BTW, this isn’t the first time I’ve attempted this piece. I did a four-track cassette version some 20 years ago. (I wound up using it as my Tom Waits audition tape. Tom, fortunately, is very open-minded.) I haven’t looked at the piece in detail since then, but when I revisited it this week, I was shocked to realize how much of its melodic and harmonic vocabulary had crept into my playing, especially the snaky half-diminished scales. Which, I suppose, is what you get for listening to stuff like this as a teenager instead of KISS or Sabbath. 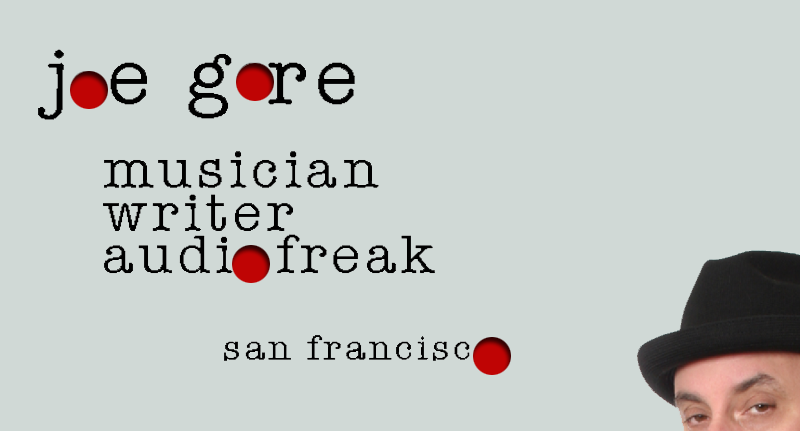