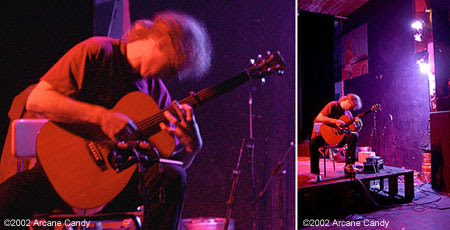 Rod Poole began playing the guitar in 1972. He experimented with various musical idioms and by the mid-80s, his primary interests were acoustic-based free improvisation and finger-picked solo acoustic guitar. A founding member of the Oxford Improvisors’ Cooperative, Poole’s association was between the years 1983-1986. After moving to the United States in 1989, his studies in just intonation began with the world’s foremost theorist on the subject, Ervin Wilson. Poole spent the next several years developing his approach to playing the guitar using just intonation theory. Poole has released a handful of unique and highly praised CDs on the W.I.N., Transparency, and Incus labels – The Dead Adder, December 96, Iasis,and The Acoustic Guitar Trio. He contributed “Kalaidoscopic Sunday” to the Henry Kaiser-curated guitar compilation, 156 Strings, and “The Fire Left to Come” to the SASSAS two-CD set, Sound, a compilation of Los Angeles-based performances curated by Cindy Bernard. Poole was also responsible for engineering the recording of all but three of the performances on Sound. He has performed with Derek Bailey, Mia Masaoka, Joseph Hammer, Kraig Grady, Nels Cline, Donald Miller, Pat Thomas, Tony Bevan, Eugene Chadbourne, and others.

Rod Poole, who has died aged 45 after being stabbed in the car park of a Hollywood diner, was an experimental guitarist committed to just intonation - a tuning system that traced its lineage back to Pythagoras. His own guitar, a 1972 Martin Acoustic, had been rebuilt with a new fretboard to accommodate a 23-note octave of his own design.
Rod was born in Taplow, Shropshire, and his teenage years were spent hitchhiking around the festival scene. He took a series of jobs, but one of the longest was behind the counter of Garon Records, in Oxford's covered market, where he was a knowledgeable and erudite guide to customers.

He was an early mainstay of the improvised music business in Oxford, but became disillusioned with many aspects of the British scene, particularly its factional politics, and what he perceived as a tendency to elevate novelty over quality. He moved to the US in 1989 with little more than the clothes on his back. He began studying tuning systems with Ervin Wilson in Los Angeles, and rapidly established himself as a respected figure in the city's experimental music scene. Later, he played concerts on both coasts. His musical heroes included John Coltrane and Sun Ra, Jimi Hendrix and Led Zeppelin, Davy Graham and Iranian classical musicians. Ambivalent about his new home - he loathed mainstream US politics - he had a nostalgia for wet weather, Dr Who and sitcoms. He was, however, passionate about the cultural legacy of Los Angeles in literature, film and music.

Self-taught in most subjects, Rod pursued these interests with a thoroughness that could leave someone bruised if they chose to argue with him about them. He had hobby horses about the superiority of vinyl over digital recordings, and latterly developed a commitment to mono recording. He had learned much from the recording engineer Michael Gerzon, and his CDs would come complete with details of the equipment used in their production. His fine ear could distinguish a minute discrepancy in tuning or a mis- identified sideman on an obscure jazz record.

At the time of his death, Rod was making plans to relaunch his music. He had circulated review copies of an LP, For Derek/For Bag, which contained tributes to his friend and mentor Derek Bailey, and his cat, Bag, and was planning a series of concerts on the east coast later this year. He is survived by his beloved wife Lisa.