Learn about accountability on Kickstarter

An all-tube desktop/rackmount guitar amplifier and direct box, specifically designed for direct recording.
The Fryette Valvulator GP/DI is an all-tube low-power guitar amplifier, preamplifier, direct box, and all-around low-volume-playing solution.   It is specifically designed to work in situations where you can't or don’t need to play loud, such as late-night playing and recording, headphone practicing, and recording straight into the board live. It is the first all-tube guitar amplifier designed to do that without any additional equipment, and a minimum of trouble.

The GP/DI is a single-channel amplifier. The preamp is based on the Fryette Deliverance Series, but has been specifically voiced for [even] more versatility in this ultra-low power tube amp. The preamp section uses three 12AX7 tubes and is switchable between three and four stages of gain. It is capable of just about any type of tone you can think of, from squeaky clean to classic rock to metal.
The power amp section is a one-tube push-pull design feeding a specially designed reactive load, so you can use it without a cabinet, or you can plug in a speaker cabinet and wail away. Even a very small amount of power through a typical guitar speaker can actually deliver some real volume! You can also plug that load directly into another power amp (or amplifier effect return) using the 'External Power Amp' output. The preamp and power amp are designed to work together to achieve the same sort of feel and dynamic control you would get out of one of our larger amps. That’s because it’s a real tube amp, just taken to the smallest level! 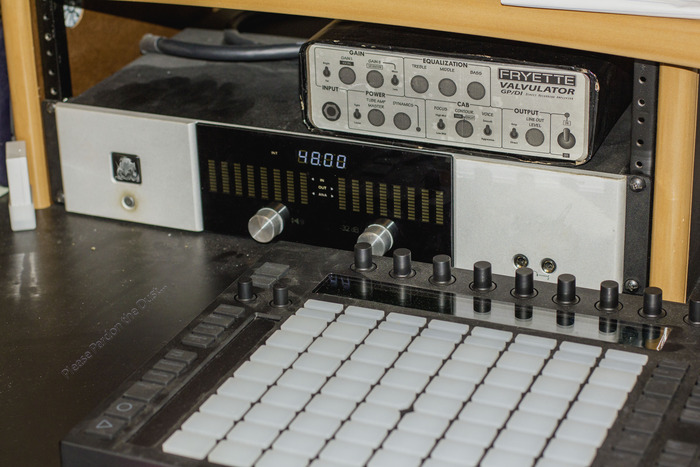 Size comparison of the GP/DI


The Cab section controls a specially-designed post-amplifier dynamic voicing section (stay with us here) that allows you to shape the tone in "direct-to-board" recording and live situations. This post EQ feature only affects the 'Amp/Direct' output. It works through a purpose-built pre-emphasis / de-emphasis filter network - and don't worry, it is very easy to use! This filter is dynamic - unlike traditional "Cab/Speaker Simulators" it actually responds to your playing style and pick attack just like a typical full size guitar amplifier and speaker system.
There are two separate 'Direct' outputs. One is the main output, the level of which can be controlled from the front panel. It can be switched between Amp and Direct modes, so that you can leave it plugged into a single input on your board or audio interface and switch between using the GP/DI as a guitar amp or a direct box. The other output is a direct only output, referenced to line level (+4) and always at unity gain. This feature is based on our Valvulator I Vacuum Tube Buffer . So now, we have provided two discrete outputs allowing you to record the direct guitar simultaneously with the “amp”-lified signal, in case you want to re-amp the original unprocessed performance later.

Fryette Amplification is the brainchild of Steven M. Fryette. He founded the company as VHT Amplification in 1989, and changed to the current name in 2009. For 25 years now we have been helping guitar players find the tone in their heads.
Steve Fryette has over 40 years experience in electronic engineering, vacuum tube application, musical instrument product design, and audio systems design and integration. He has designed, engineered, and produced the entire product line from PCB to metal fabrication. Prior to founding Fryette Amplification [as VHT] in 1989, he had over a decade of experience working for highly regarded amplifier repair businesses in the Los Angeles area. He has pioneered many innovations in his field including rack systems for guitarists, the widely adopted “Depth Control”, multi-channel amplifiers with comprehensive switching abilities, and the patented Dynamic Sensing Regulator for guitar power amplifiers.
Paul Schieffer is new to the Fryette team, but brings a lot to the table. His primary vocation is as an audio engineer and music producer, but he is also a serial entrepreneur with a background in marketing and product development. His experience as an audio engineer has been instrumental in the development of the GP/DI, and his experience in marketing made him the perfect person to help Steve bring this campaign to Kickstarter.

It all started with a conversation here about how to get great guitar sounds at low volume. We do this a lot. We’ve talked about doing lower-wattage amps before, but usually doing, say, an '18 Watt Deliverance' doesn't really solve the problem of being too loud in apartment settings. At some point in the conversation, it became apparent that "well, if you want quiet, why not go all the way down to 1 watt!?!"
After that conversation Paul sat down, wrote out a feature list, and did a faceplate mockup - and that was that. He worked out every feature that he thought the home/recording guitarist would need, and we figured out how to fit it all in one small box. Paul: “I’d been working on a ‘speaker simulator’ circuit for a while for use in my own studio. I’d been going about the process a bit differently than everyone else was, so when Steve and I started talking about the GP/DI, it seemed the perfect place to apply what I had learned.”
After Paul finished the initial conceptual stages, Steve drew out a schematic on the “Big Board” where new design concepts live or die. Then he and the team spent a few days building an initial prototype...


Right now we have initial prototypes built for the individual components that make up the GP/DI - the amplifier, the load, and the 'cab section'. Our next step will be to build the production “golden sample” combining all the individual elements. These will be completed within a couple of weeks of the start of the campaign. We will build three working prototypes using the final production specifications, to be completed by the end of the year. From there it is just a matter of getting the final details worked out - approving custom components and materials acquisition, and so on.

By the end of this campaign, all development details will be well under way, from final product specifications to supply chain to production schedule. If we meet our campaign goal, fulfillment won't be a problem. We are a company with 25 years of history building amplifiers - while this product is the first of this type that we have built, from a production standpoint it isn't really any different from any other product we have ever released.
We will begin production immediately upon the completion of the final prototype and the successful completion of this campaign. Given the realities of lead times and production schedules, contributors can expect their units a couple of months after that - we are estimating February 2014 for the earliest contributors and
March 2014 for later contributors.

Risks and challenges Learn about accountability on Kickstarter

Fryette is a respected amplifier builder with a history of well received and award winning designs. The GP/DI will have been built, tested and proven under the most demanding of conditions imaginable. It is being manufactured under the most stringent specifications with every step and operation being overseen or performed by experienced engineers.
Given the nature of the product, we do not foresee many challenges in fulfillment if our campaign is successfully funded. The only real risks involved are the usual risks of manufacturing - part availability and second-party component manufacturing delays are common issues, especially with the types of custom parts we use, such as transformers and potentiometers.
The custom transformers are being produced by trusted suppliers to our exacting specifications. The vacuum tubes have already been sourced, screened and pretested for this project. Finally, the initial tooling and engineering challenges have already been evaluated for feasibility and cost. In short, all of the usual manufacturing variables and potential challenges of a project of this scope have been anticipated, addressed and backed up to insure a smooth, successful completion.