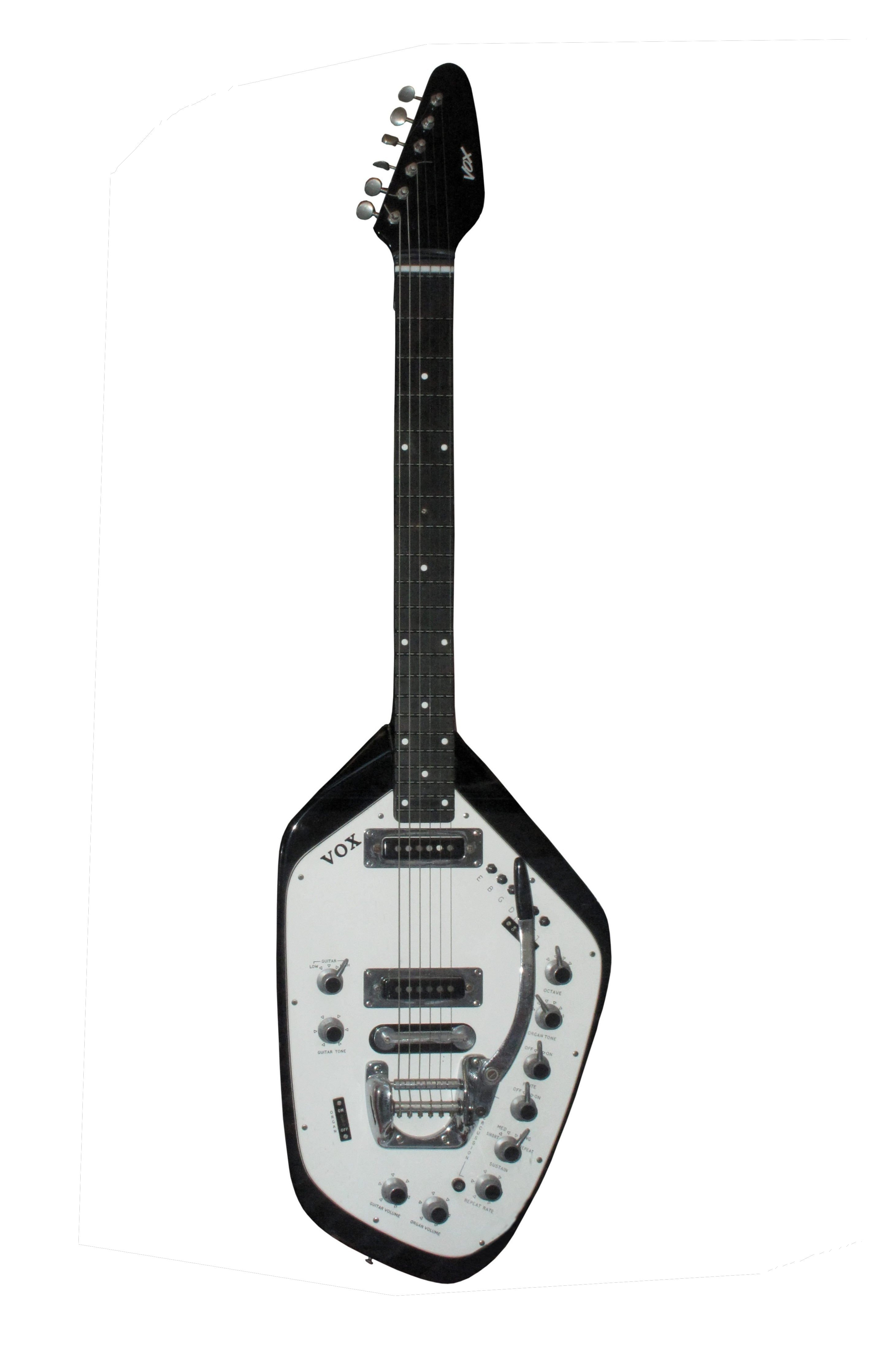 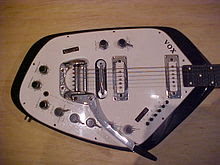 The Vox V251 GuitarOrgan
In 1966, Vox introduced the problematic V251 GuitarOrgan, a Phantom VI guitar with internal organ electronics. John Lennon was given one in a bid to secure an endorsement, though this never panned out.[citation needed] According to Up-Tight: the Velvet Underground Story, Brian Jones of the Rolling Stones also tried one; when asked by the Velvets if it "worked", his answer was negative.[citation needed]
The V251 connects to a mains power-supply unit via DIN plugs and a four-conductor cable (power, guitar output, organ output and common). The PSU in turn has individual amplifier outputs for guitar and organ.
Organ tones are sounded in one of three ways; in 'normal' mode, by pressing any string onto a fret; in 'percussion' mode, by fretting any string and touching the included brass plectrum (connected to a short wire plugged into a socket on the scratchplate) onto any metal part of the guitar; or by pressing one of the six 'open string' buttons. There is an option to silence the lowest two strings, and the organ section, as a whole, can also be switched off. There is a four-position octave selector, a six-position effect selector, a four-way selector for the percussion, and a flute selector.
The guitar section is equipped with two Vox pickups, a three-way selector, and conventional volume and tone controls. In common with Phantom models, it has a Bigsby-style tremolo unit, a fixed-intonation bridge and individual Vox-branded tuners.
The V251 is somewhat awkward to play as the neck is wider at the nut end than at the body, and a player's natural tendency to bend a string results in it slipping off the divided fret. Additionally, at nearly 9 lbs, it is very heavy, as might be expected.
The instrument never became popular though it was a precursor to the modern guitar synthesizer. Ian Curtis of Joy Division is sometimes believed to have used a GuitarOrgan, but he actually used a Phantom VII special with onboard effects.

The Vox Guitar Organ was one of the most complicated and innovative products attempted by JMI Vox in the 1960s. The brain child of Vox lead engineer Dick Denney, the Guitar Organ added solid state organ circuitry derived from the Vox Continental organ to a Vox Phantom guitar. This allowed the Guitar Organ to be played as a guitar or an organ, either separately or combined. The Vox Guitar Organ had six organ tone generator circuits built into a cavity in the guitar body, one generator for each of the six strings. The contacts that trigger the organ circuits to play were found in the frets of the guitar. Each fret on the guitar neck had six electronic contacts, one under each string. The circuit to the organ tone generator was completed when any of the guitar strings, which were grounded, were depressed to touch their respective fret mounted contact.
The organ tone generators developed different pitches based on the number of ohms separating the organ tone generator input signal from ground. The higher the electrical resistance, the lower the tone.
To facilitate the production of the correct organ pitch for each location on the neck, a series of twenty one resistors interconnected the twenty one fret contacts under each string, one resistor per fret. Depressing a string on the first (or lowest) fret would cause the signal to travel through all twenty one resistors before triggering the organ tone generator. Hypothetically, if each resistor was 100 ohms, the total accumulated resistance from the first fret contact to the tone generator would be 2100 ohms. This high resistance would make the lowest tone. Depressing the same string on the twelfth fret would require the signal to travel through only 9 resistors, or 900 ohms. This lower resistance would make a much higher tone. Playing on the highest fret would eliminate all but one resistor, and make the highest tone.
A remote power supply (seen at lower left) provided the necessary voltages to operate the organ circuitry and connected to the instrument with a multi pin connector cable.