Lillian F. Schwartz is one of the pioneers in computer art and is known as the first female artist to use computers as an art tool. We quote a lengthy passage characterizing some of her earliest steps in the new medium:

“In the 1960s, when Schwartz first began to explore this new medium for artistic expression, the common public perception was that such works were randomly created by the computers themselves, much like the abstract paintings spewed out by quirky machines in Jean Tinguely’s 1960 Homage to New York. From the beginning, however, Schwartz made it clear in her work that the creative genius of the artist was in command of her technological toolbox. The computer was just another implement to be mastered, just as she had earlier learned the disciplined control required in using traditional Japanese calligraphy brushes. Schwartz shared this confident, experimental approach to the new medium in her immensely practical survey of the field, [”“The Computer Artist’s Handbook” “:Publication@119]_ (co-authored with Laurens Schwartz). 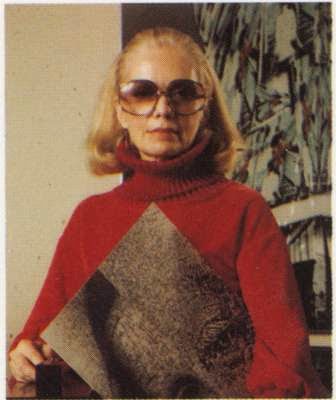 Even before becoming a member of the group, [“Experiments in Art and Technology” "Collective@29] (EAT), Schwartz had long demonstrated a keen interest in the combination of art with technology and science. However, although fascinated with the technological aspects of the computer as a new approach to creating art, Schwartz was most concerned with the finished product — the permanent work of art. In the early computer works therefore, one will find the somewhat limited results of the computer program enhanced with beautiful colors in more traditional materials, such as silkscreen and film. In time, the technology advanced to the degree that her digital works created with the computer could be viewed in their finished state on a high quality monitor and printed out with the intensity and nuances of color desired. She continues to experiment and to push the medium to achieve the results for which she is striving."

Schwartz came to the Bell Laboratories at Murray Hills, NJ (USA), as artist in residence, a position that apparently she was able to keep from 1969 on for about 30 years. Nobel prize laureate (physics), Arno Penzias, who was also working for Bell, once said of her: “What we know as computer art began in December 1968, when Lillian Schwartz grasped a light pen and began to draw.”

Lillian Schwartz, resident artist and consultant at Bell Laboratories (New Jersey), 1969-2002. During the 70s and 80s Schwartz developed a catalogue of visionary techniques for the use of the computer system by artists. Her formal explorations in abstract animation involved the marriage of film, computers and music in collaboration with such luminaries as computer musicians Jean-Claude Risset, Max Mathews, Vladimir Ussachevsky, Milton Babbit, and Richard Moore. Schwartz’s films have been shown and won awards at the Venice Biennale, Zagreb, Cannes, The National Academy of Television Arts and Sciences, and nominated and received Emmy nominations and awards.


Her work has been exhibited at, and is owned by, The Museum of Modern Art (New York), The Metropolitan Museum of Art (New York), The Whitney Museum of American Art (New York), The Moderna Museet (Stockholm), Centre Beauborg (Paris), Stedlijk Museum of Art (Amsterdam), and the Grand Palais Museum (Paris). Lumen has collaborated with Lillian Schwartz and curator Gregory Kurcewicz to compile a touring package of these important works. “A Beautiful Virus Inside the Machine” features animations restored to video. “The Artist and the Computer”, 1976, 10 mins is a documentary about her work. Produced by Larry Keating for AT&T, “The Artist and the Computer is an excellent introductory informational film that dispels some of the ‘mystery’ of computer-art technology, as it clarifies the necessary human input of integrity, artistic sensibilities, and aesthetics. Ms. Schwartz’s voice over narration explains what she hoped to accomplish in the excerpts from a number of her films and gives insight into the artist’s problems and decisions.” – John Canemaker

“The changing dots, ectoplasmic shapes and electronic music of L. Schwartz’s ‘Mutations’ which has been shot with the aid of computers and lasers, makes for an eye-catching view of the potentials of the new techniques.” – A. H. Weiler, N. Y. Times. Music by Jean-Claude Risset–commissioned by Office de Radiodiffusion-Television Francaise. Golden Eagle-Cine 1973; Red Ribbon award – Special Effects – National Academy of Television Arts & Sciences; Cannes Film Festival, 1974. Recent screening at the Museum of Modern Art, New York, December 10, 2012. shown at festiva musica acoustica. mutation exhibited in a concert of works by JEAN-CLAUDE RISSET. OCT 2013

The Artist and the Computer

''I studied free-hand drawing at the University in 1948–1949, oil painting in St. Louis, Missouri, watercolors and woodcuts in Fukuoka, Japan and finally came to the New York area in the 50's and continued to study art.
An intense interest in new materials and its effects on continued stimulus to the creative process during the growth of a work of art led me to be aware of and to incorporate existing technology into my work.


I met and began working with Ken Knowlton, a computer scientist, in 1969, following the 'MACHINE' exhibition at the Museum of Modern Art. The international organization of Experiments in Art and Technology (E.A.T.) was founded "to try to establish a better working relationship among artists, engineers and industry."
In line with that purpose E.A.T. agreed to arrange a competition in connection with the 'MACHINE' exhibit. About 200 works were submitted. Of these, nine works were selected by Pontus Hulten, the director of the show, for inclusion in the exhibition.


My sculpture 'Proxima Centauri' and 'Studies in Perception 1,' a graphic, by Harmon and Knowlton were two of the exhibits.
The show catalogue describes 'Proxima Centauri' as, "Changing patterns appear on the surface of a white translucent dome, which at times seem to become a gelatinous mass that shakes, breathes, and then returns to still images. As the spectator approaches the sculpture, the dome throws off a red glow while slowly sinking into the base and thus inviting the viewer to come still closer to observe this phenomenon. The dome is now resting inside the base. Peering down into the rectangle, the viewer sees the spectacle of a series of abstract pictures focused on the globe..."


The catalogue writes about 'Studies in Perception 1' ... "Computer graphics were created for utilitarian purposes. Among the uses are to study the field of view seen from the pilot's seat in an airplane, or to analyze a flat image in order to manipulate graphic data. The characteristics of the computer at the moment are strikingly shown in 'computer art.' The computer can act as an intelligent being: process information, obey intricate rules, manipulate symbols, and even learn by experience. But since it is not capable of initiating concepts, it cannot be truly creative; it has no access to imagination, intuition, and emotion." The last sentence can be applied to any medium but the previous sentence describes a medium that can process information, obey rules, and even learn by experience!


The awesomeness of such a tool places the artist in quite a humble position. There is a necessary kind of readjustment for the artist for here is a medium that may take some of the burdens from the artist. To find the real justification for the use of the computer by a painter would be to shift the emphasis by stimulating a new angle of approach; to may be relieve the formal elements of some of the conscious emphases which are necessary and place more stress on content.
With such a medium we now have the means of displaying, in its constituent parts, images which possess simultaneously a number of dimensions.


To handle such a tool I find it necessary to break down these specific dimensions.
First, there are the more or less limited formal factors, such as line, tone value, and color. And, secondly, if the computer is used in filmmaking a knowledge of the craft of film.
As an example, when the artist considers line it is usually thought of as being a matter of simple properties such as length, angles, focal distance, and thickness. But measuring the characteristics of line by using a computer is of quite a different nature.


The associative properties once used by the non-computer artist no longer correspond to the direct will of the artist.
To perform the simple act of drawing a line over a page, exerting pressure on the pencil, charcoal or other instrument to change the thickness of the line or the direction becomes a major task in programming.


All rules concerning the use of the line must be well thought out in advance. With proper flexibility in a program one can accept or reject. The rewards eventually come when these lines can be positioned as desired. The artist can then contemplate the positions of these lines as drawn with any other medium but—with the computer an instruction can rotate the lines, join them, multiply them, or whatever instruction has been previously built into the program.


From this point, given mastery of the medium, the structure can be assured foundations of such strength that it is able to reach out into dimensions far removed from one's expectations.
It is no easy task for the artist to live with too much freedom in her medium. Great care must be given to the selectivity of these elements. Speaking from my own experience, it depends on my mood at the time of editing images into their final film form that decisions as to which of the many elements are brought out of their general order, out of their appointed array, and raised together to a new order and form. It seems clearer that the results of this medium may well fall into direct ascendancy of the hieratic forms of Seurat and the mosaics of Byzantium. The artists in India also worked from set Sudras. Even among the more recent artists Delacroix, Cezanne, and Matisse, the same desire for system and regularity for an ordered universe seem to dominate.''

''Artists must express their own creative character in the technology of their era in order to find their own historical and individual level.
The computer has also assisted me in the visualization of sculpture in three dimensions. Programs can be used to rotate sculptures, to view them stereoscopically, to place in a given site—all before any execution has taken place.''


PIXILLATION occurred at a time when the computer system was linear in time and space; Programs did not yet control pixels as moving, malleable palettes so Lillian F. Schwartz only coded a few lines ofcomputer-generated black and white texture that she intermixed with colored hand animation. She developed an editing technique so that colors between the two media were usually matched, but sometimes mismatched to permit the eye to see an even more saturated color arrangement. The film can be viewed in either 2D or 3D without pixel shifting although one must wear chroma-depth glasses.