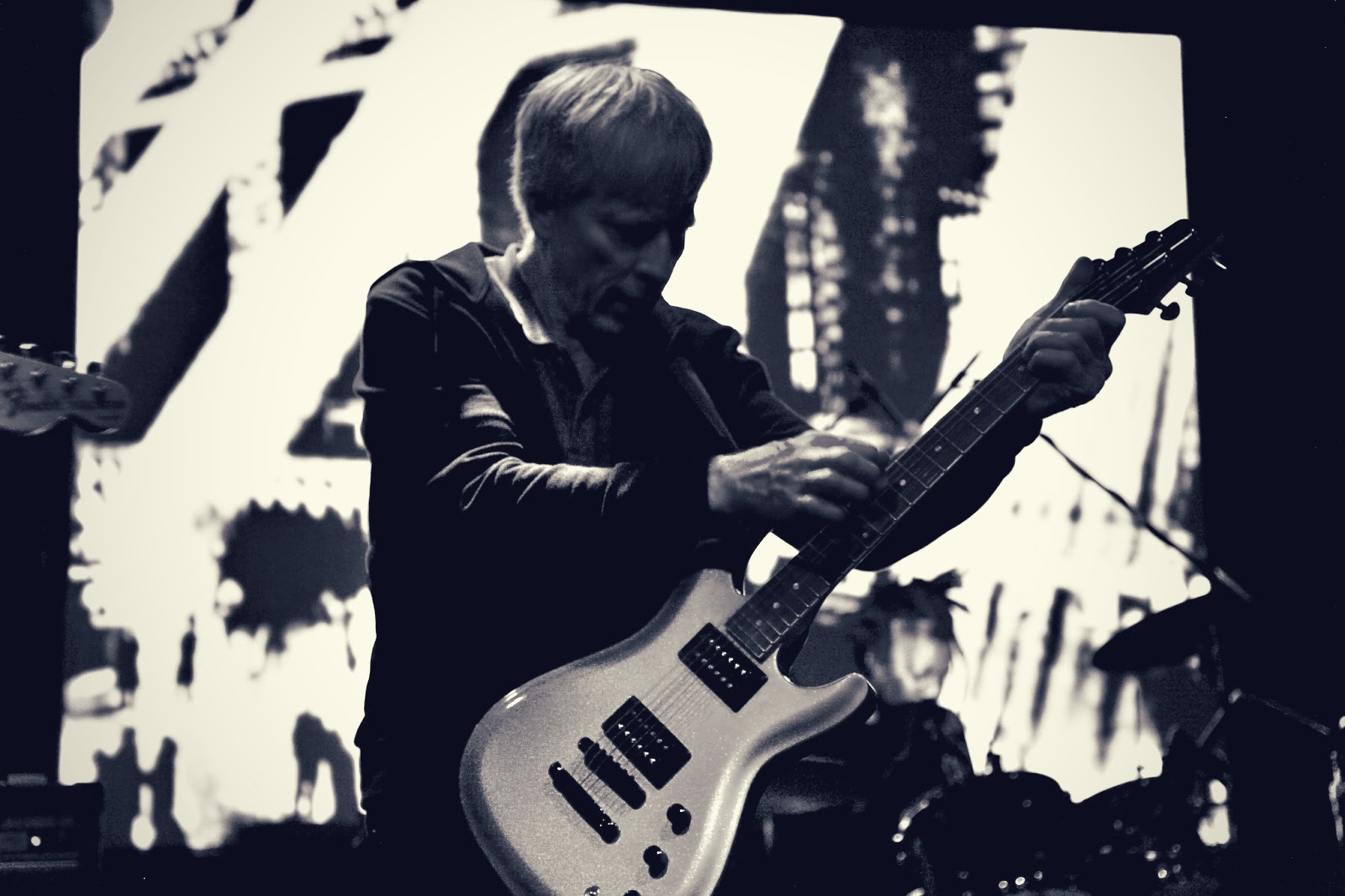 Rhys Chatham is a composer, guitarist and trumpet player from Manhattan, currently living in Paris, who altered the DNA of rock and created a new type of urban music by fusing the overtone-drenched minimalism of the early 60s with the relentless, elemental fury of the Ramones  — the textural intricacies of the avant-garde colliding with the visceral punch of electric guitar-slinging punk rock. 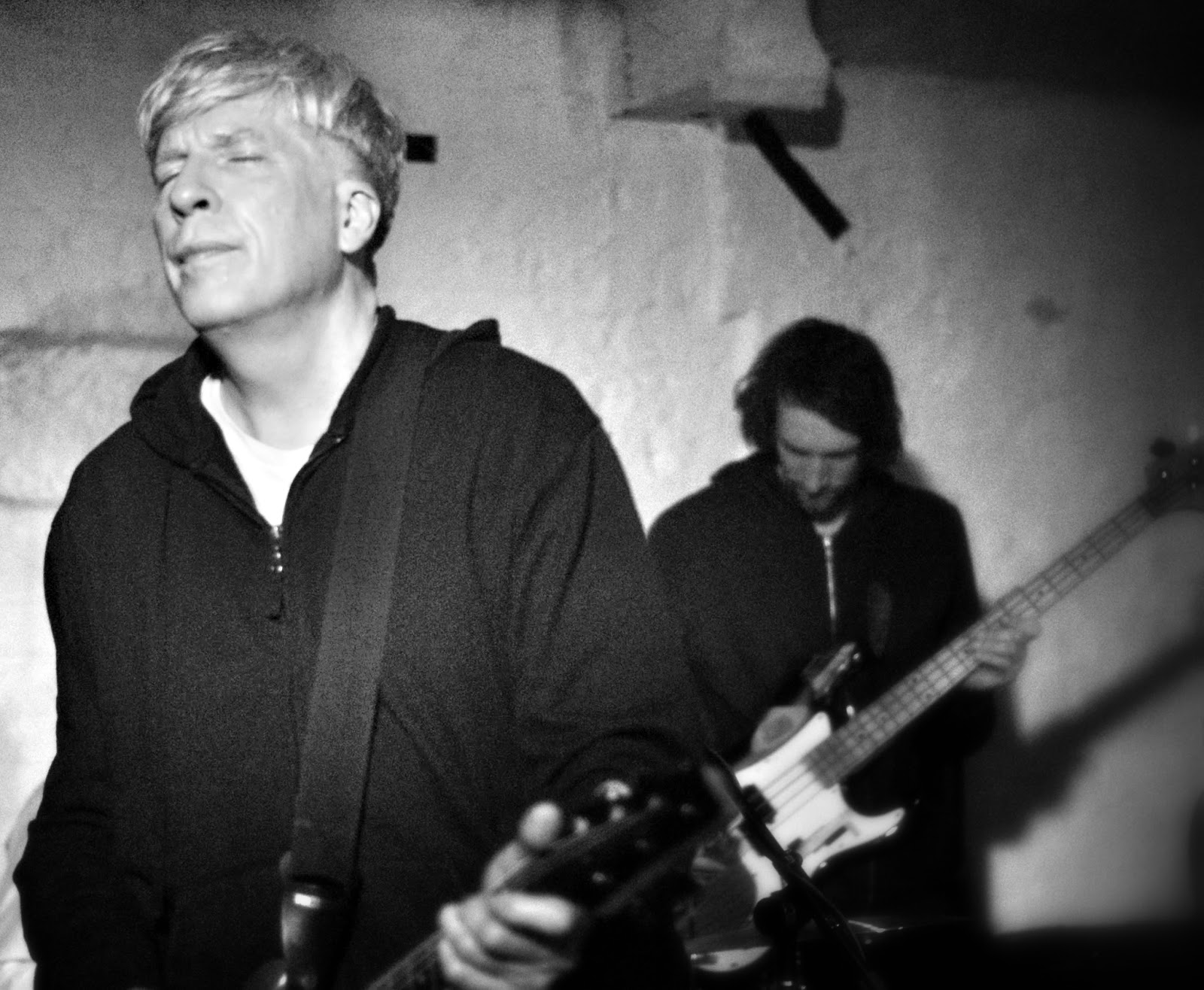 Starting with Guitar Trio in the 1970s and culminating with A Crimson Grail for 200 electric guitars in 2009, Chatham has been working for over 30 years to make use of armies of electric guitars in special tunings to merge the extended-time music of the sixties and seventies with serious hard rock. 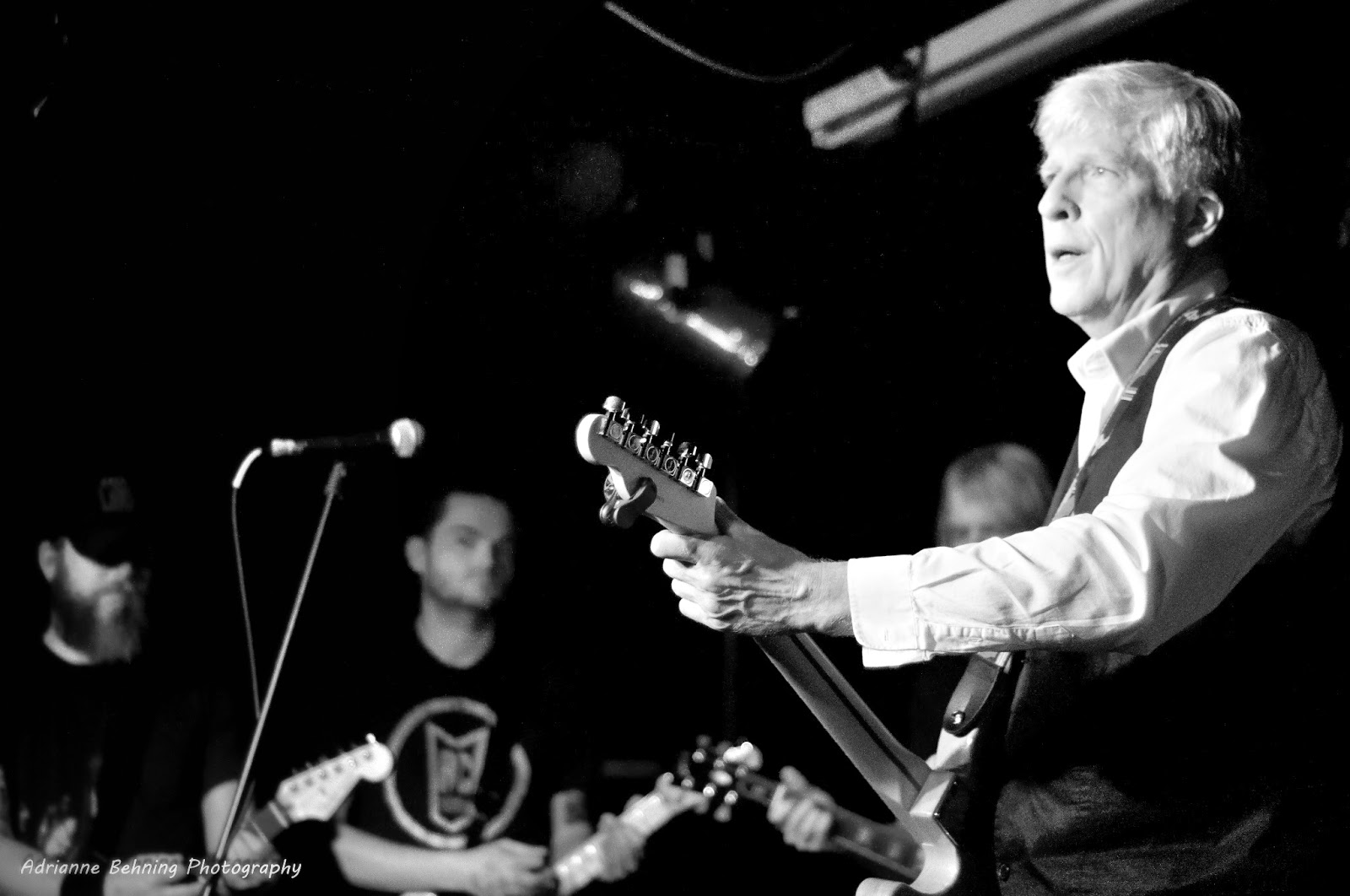 Parallel with his rock-influenced pieces, Chatham has been working with various brass configurations since 1982, and recently has developed a completely new approach to collaborations, improvised and compositional pieces involving trumpet through performances and recordings that started in 2009. Chatham's trumpet work deploys extended playing techniques inherited from the glory days the early New York minimalist and 70s loft jazz period. 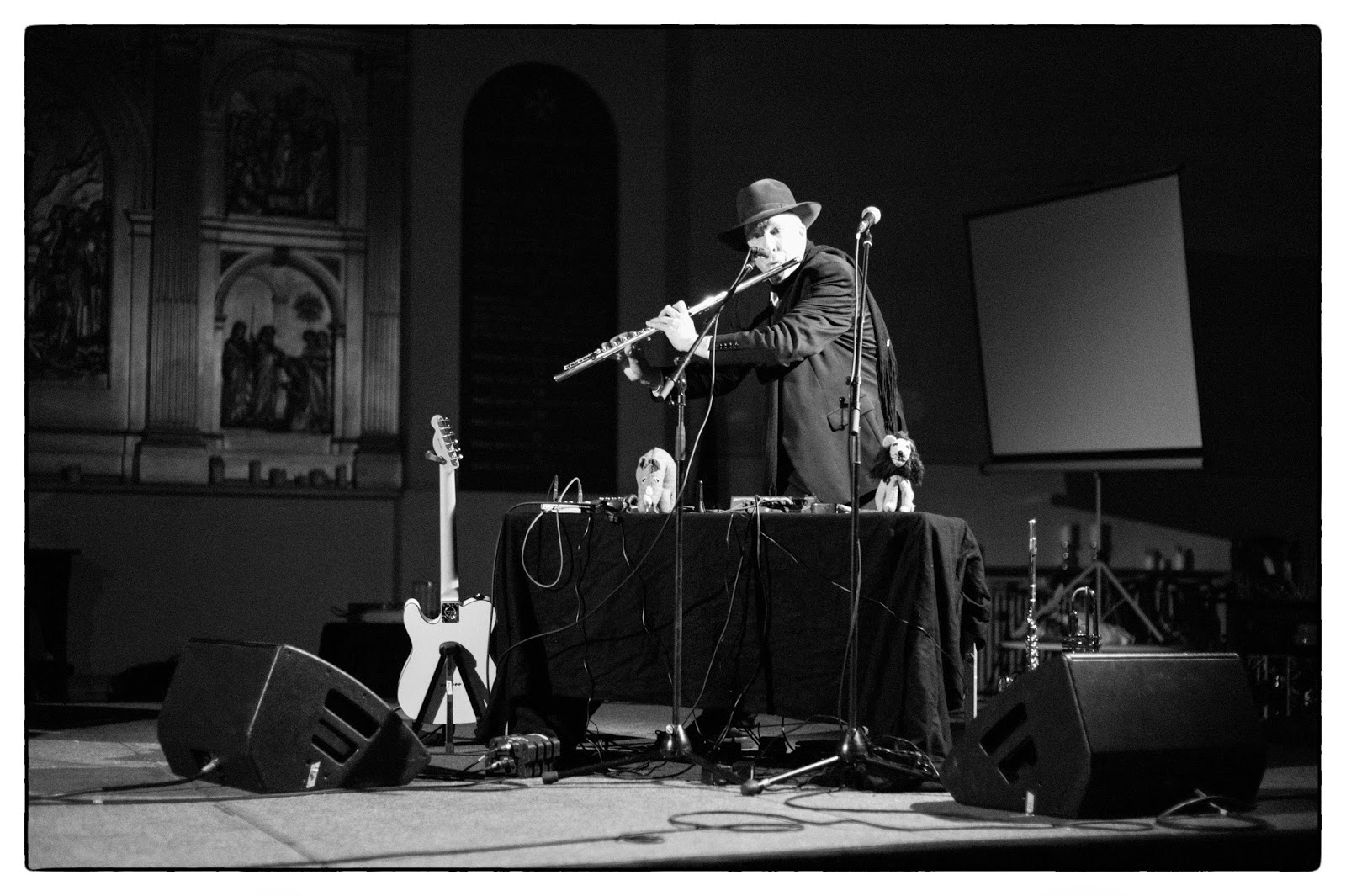 Rhys was introduced to electronic music and composition by Morton Subotnick in the late 60s, and in the early seventies he studied composition with La Monte Young and played in Tony Conrad's early group. These composers are, along with Terry Riley, the founders of American minimalism and were a profound influence on Chatham's work. 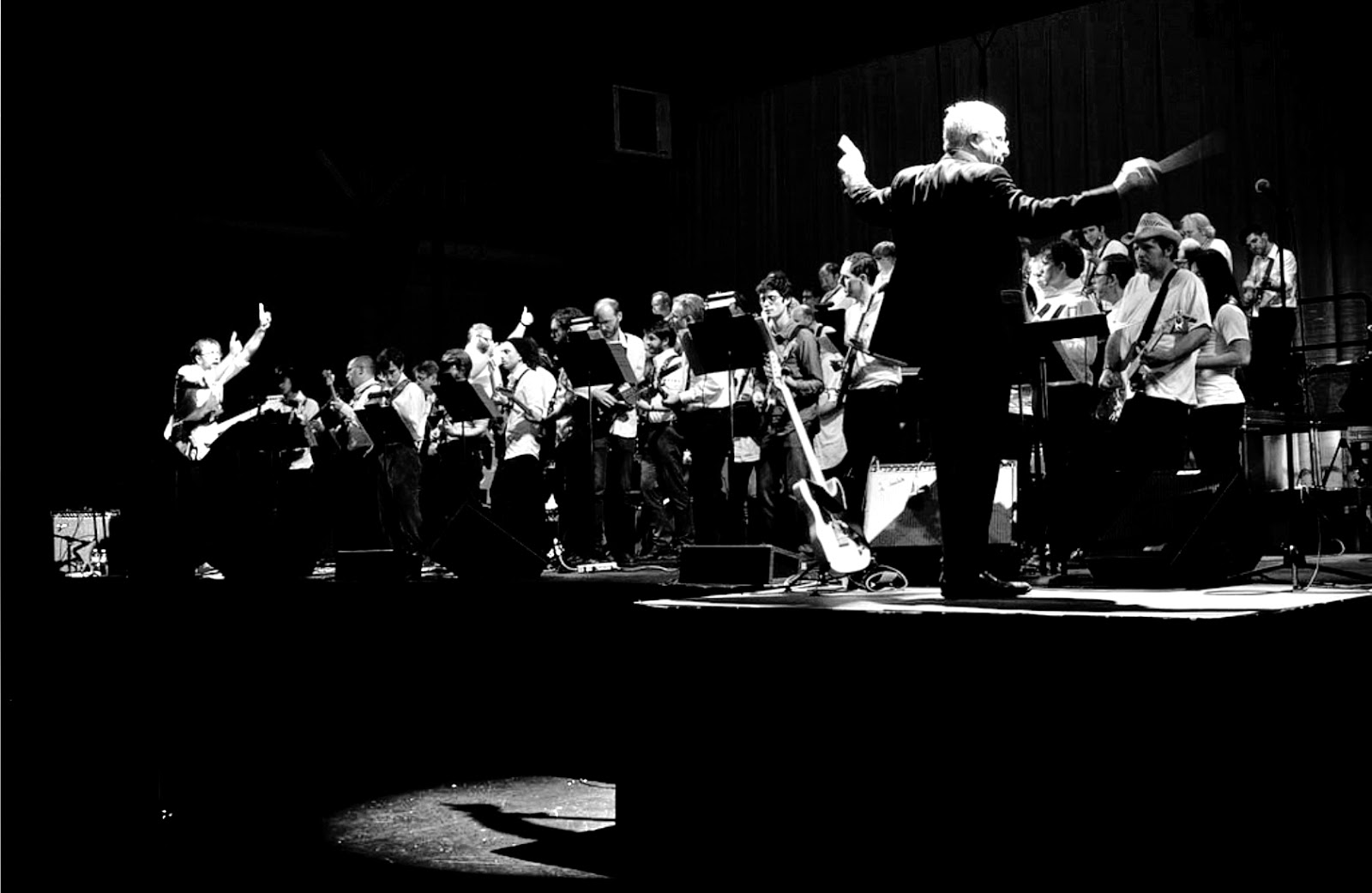 
What's the first musical sound do you remember?

My parents lived in Greenwich Village in Manhattan during the 1950s.  They had music going on in their apartment on Macdougal Street all the time.  The first music I remember from when I was about three years old was Igor Stravinsky’s L’Histoire du soldat.  Every time I hear this piece now, it brings back childhood memories.


I have a deep, deep need to make music.  When I was younger, I avoided being responsible about taking care of all the boring administrative work any composer has to do, because all I really wanted to do was play! And write. 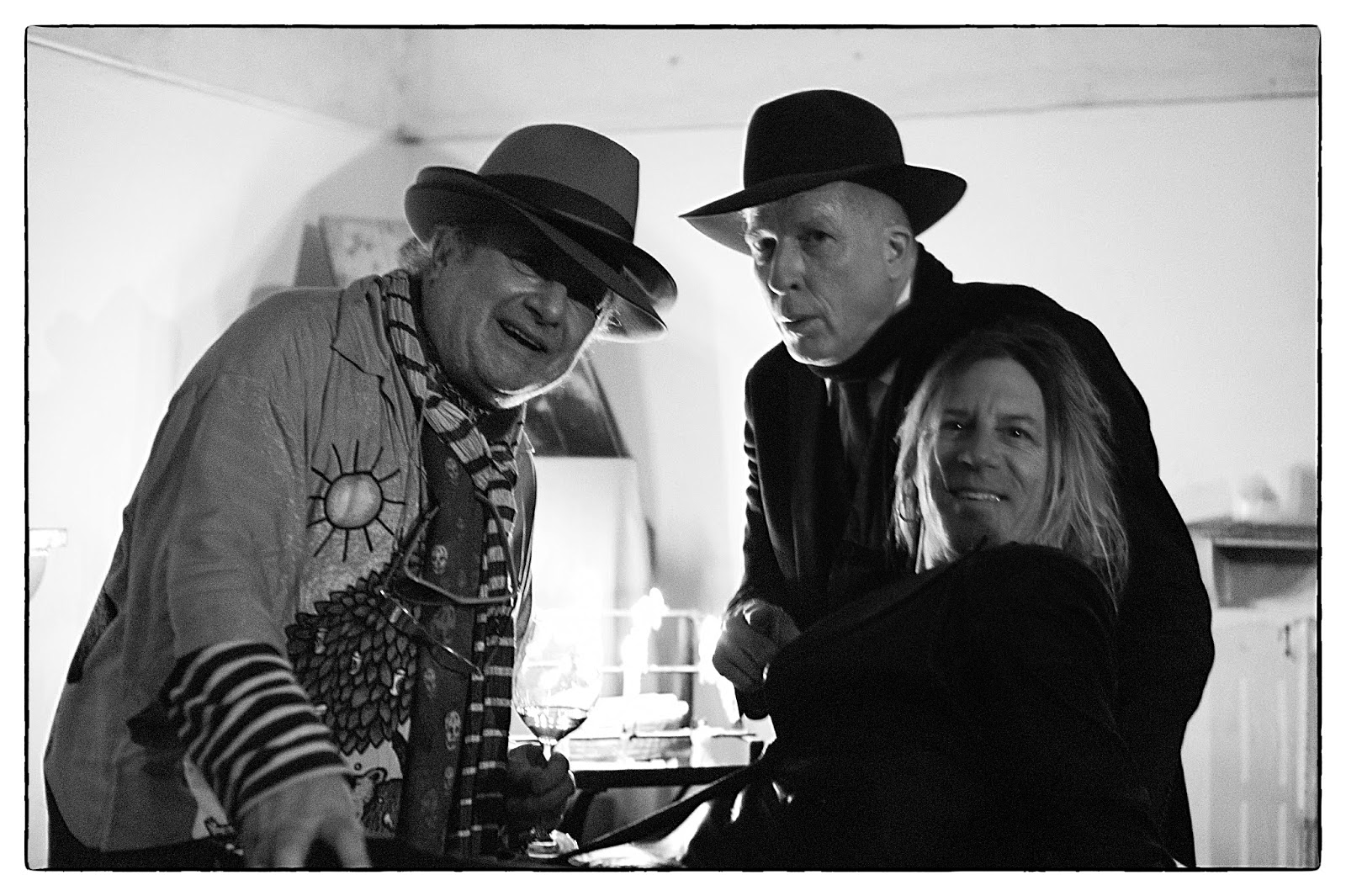 
As I got older, I became more responsible and now I find that doing admin, the accounting, all these boring things, why… it’s very important.  But it’s time consuming.  One time I had to spend three weeks working full-time putting my books together for my accountant because I didn’t take care of doing this on a daily basis over the course of the fiscal year.  It was horrible, I couldn’t practice for three weeks because I was so busy with this darned admin! 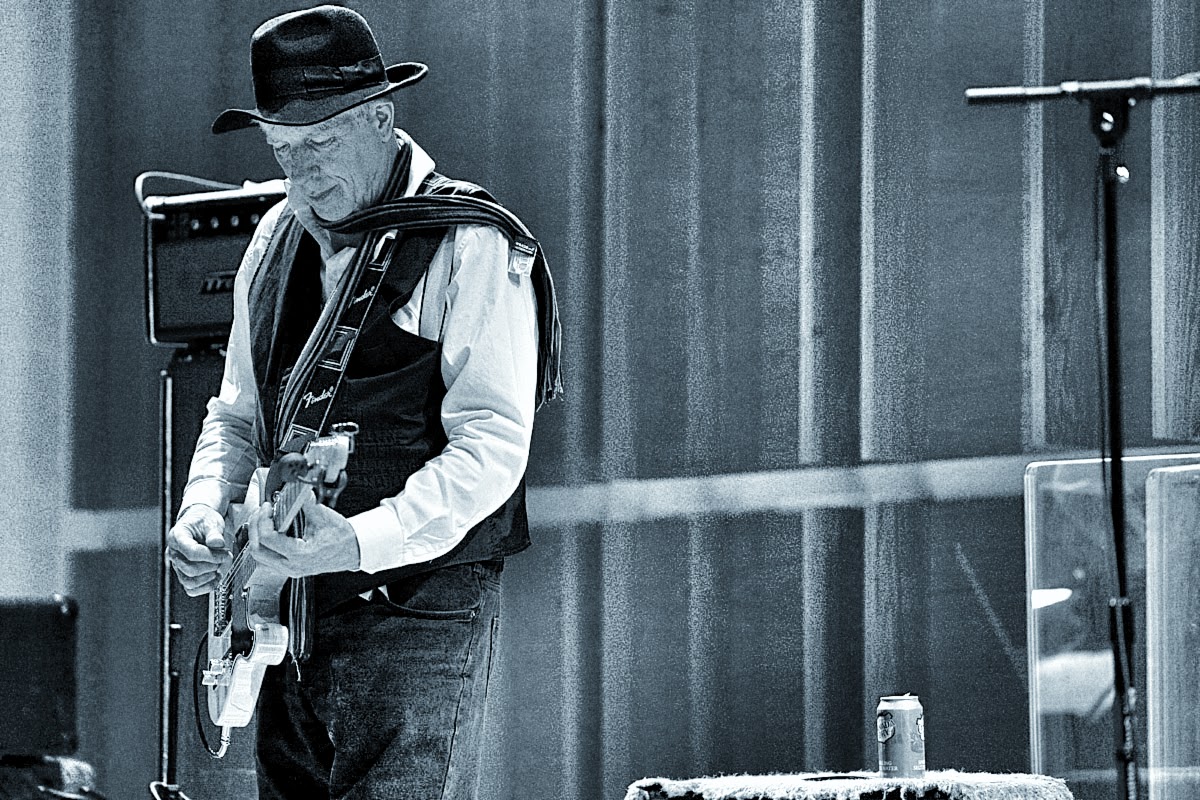 I get depressed if I can’t play or write music during the day, I’ve discovered that about myself.  I need to do music every day to stay SANE!  So now, during the course of my 8-hour work day, I make sure I do two hours of admin each day, without fail, and that way it gets done.  The rest of the time is spent either practicing, recording or composing.

So, what's your relationship with the guitar?

I love my guitars.  Sometimes I’ll take a guitar to bed with me, which my girlfriend and cat think is pretty funny.  I like to hold my guitar, it gives me such comfort.  I also like to hold my trumpet.  If I miss a couple of days of practice on trumpet because I’ve been playing guitar, the trumpet will whisper in my ear, “Baby, baby…  where you BEEN?!?!”  My guitar is more forgiving than my trumpet, thank god.

Before sequencers, composers had to write music by hand.  Our training is to hear it in our head, or play it on the piano, and write it down.  And then take it to the rehearsal room for the musicians to play.  I’d end up throwing out half of what I wrote, because as soon as I heard the musicians play what I had written, I got new ideas of ways to make it better.

Sequencers changed all that.  It was great!  You could hear the music on the computer, so when you went in to rehearsal, you knew just what the music was supposed to sound like.  It really cut down on rehearsal time. 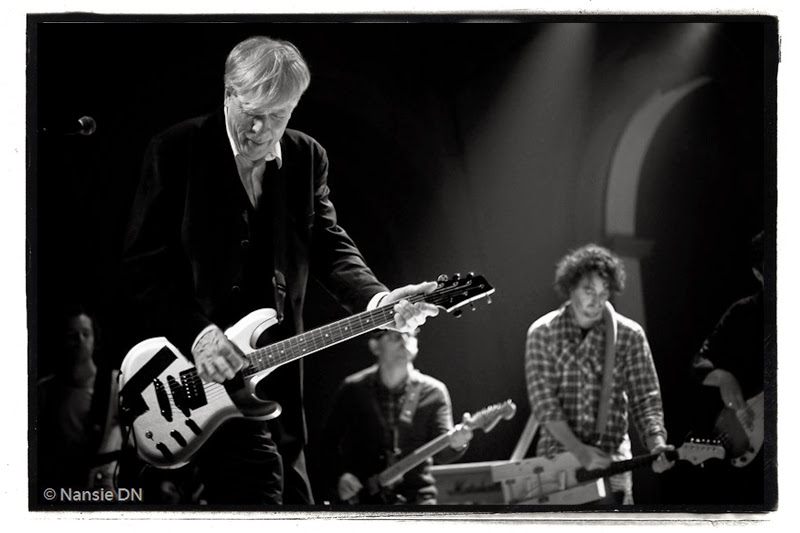 I did my first 100 electric guitar piece in 1989.  It was called An Angel Moves Too Fast to See.  Sequencers had been invented then, but no one had done a piece for 100 electric guitars before, so there was no way to sample the sound for use in composing.  So I had to write the piece in the classical way: hearing it in my head and writing it down on paper… and hoping for the best!

The biggest surprise of my life was when we did the first rehearsal for the piece, it was in Lille, France.  I was really nervous.  We didn’t have enough rehearsals for me to throw out any of the music, so it was really important that I got it right the first time.

I was amazed when the music sounded EXACTLY the way I imagined it in my head.  I was also extremely relieved.  By 1989, I had been writing for electric guitar ensembles for twelve years, so I pretty much knew the sound.  The only problem was that no one knew what 100 guitars sounded like because no one had ever done it before.  I was ecstatic when it came out the way I thought it was going to.

I love the process of creation.  I’ve never given birth, but I imagine it’s a bit like that.  I suppose that my motivations for composing are similar to the motivations of people wanting to have kids.  It’s amazing to have the initial idea for a piece and watch it grow.

I’m really, really interested in the key of E.  Also the key of B flat.

My roots are fairly public, there isn’t any secret about them.  I studied with Morton Subotnick at the end of the sixties and wrote music just like him.  Then I met Charlemagne Palestine at Morton’s electronic music studio.  Charlemagne is a bit older than me, so he became a kind of role model and  big brother.  He was doing minimalist music, so I did minimalist music, too!  Charlemagne went with Morton to go to California Institute of the Arts.  Mort invited me to go too, but I had just started the music program at the Kitchen, so I stayed behind in New York.  I kept busy with the Kitchen, and pretty soon I was playing in Tony Conrad’s group, The Dream Syndicate.  Not long after that I began studying with La Monte Young, and I sang in his group, the Theater of Eternal Music, at the start of the seventies.  All these composers as well as Eliane Radigue and Maryanne Amacher were huge influences on me. I was Maryanne’s composer assistant for a time.

At the start of the seventies I was writing pretty much in the same style as Charlemagne, Tony and La Monte.  I realised that I needed to find my own voice.  This happened for me when I went to a concert at CBGBs in 1976, it was the Ramones!  What I heard changed my life.  I got ahold of a Telecaster the next day, and pretty soon I was playing in rock bands.  In 1977, I decided that I wanted to combine my background as a minimalist with the rock music that I loved.  The result was G3, aka Guitar Trio.

I wouldn’t know, I don’t work with digital music.

Don’t drink too much before the concert!

Tell me one musical work which has provoked a change in your poetic.

Aside from the Ramones?  I guess I would have to say A Rainbow in Curved Air.  I went to see a concert of Terry Riley’s in 1969.  I was writing serial music back then, which is highly complex and atonal.  I went to hear Terry’s music and I was disgusted!  It was tonal and repetitive, yuk!!!  I went to the ticket booth to try to get my money back, but they wouldn’t give it to me, so I stayed for the rest of the concert.  After I relaxed a bit, I found myself thinking, “Hey, you know, this music isn’t so bad…” And by the time the concert was over, I was a confirmed minimalist!


1991 & Palermo performances of Rhys Chatham's composition for 100 electric guitars, An Angel Moves Too Fast to See.

Well, it’s kinda weird…  but I dream all the time of playing concerts.  Most of my dreams involve being in a concert situation of some sort, or at a rehearsal.  I don’t know why I do this. My girlfriend’s a painter.  She doesn’t dream of painting all the time.  Not sure why I dream about playing music all the time, to tell you the truth.  It’s nothing to worry about, though.

I’m working on a new piece for 100 electric guitars, as yet untitled.  I’m really excited about it, it’s going to sound a lot different from the others. 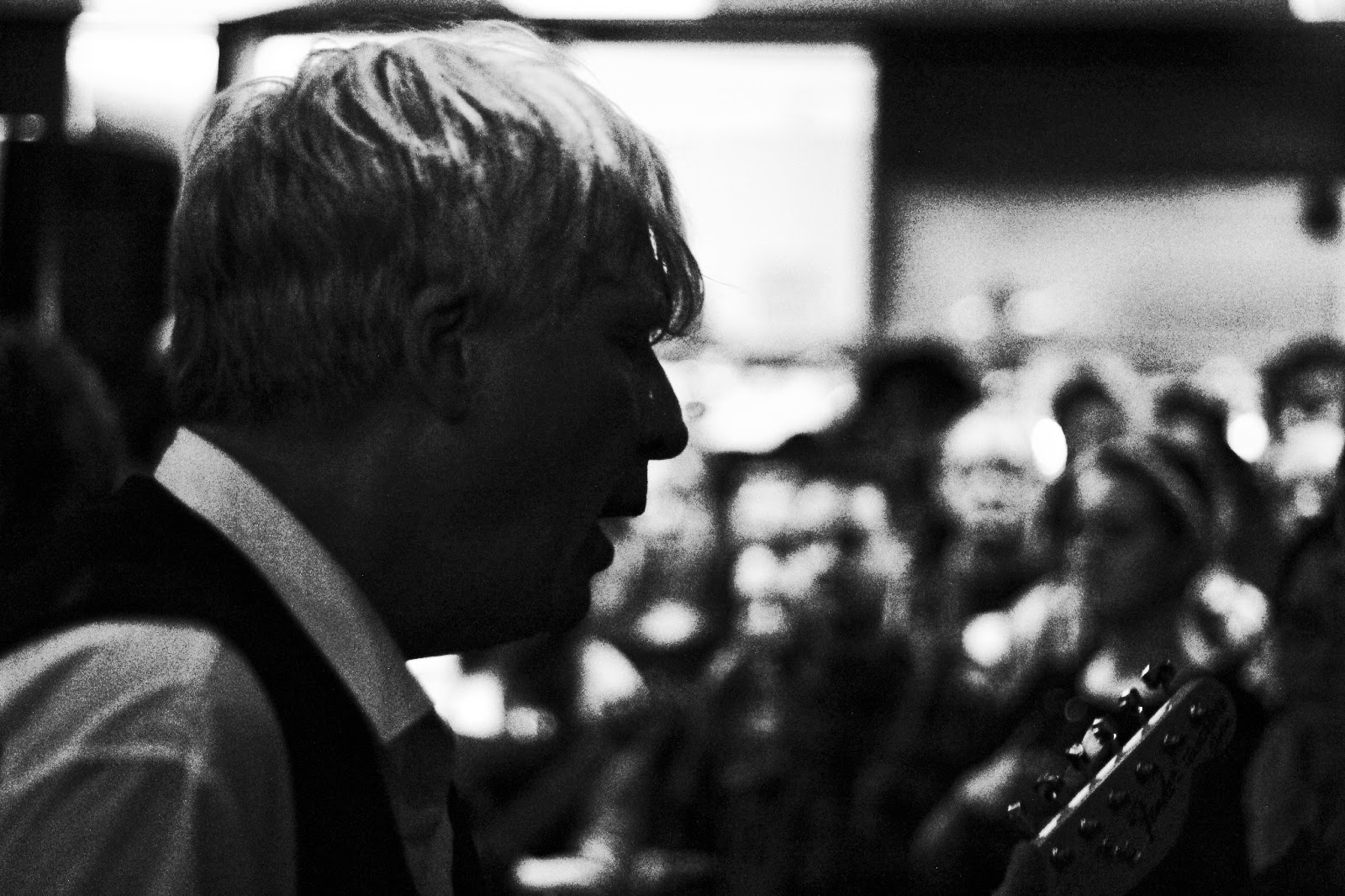 I’m also working on solo projects.  I’m a multi-instrumentalist.  I bought a bass flute recently, which I’ve added to my arsenal of alto and C flutes, electric guitar and trumpets.  I go through multiple delay units when I play, so the sound is dreamy and minimalist.  I’m working on getting the guitar part a bit more noisy, we’ll see what happens as the piece evolves.

Outdoor Spell
Northern Spy NS 004 CD, LP, MP3, FLAC
Rhys Chatham has eschewed 100 guitars for trumpet and voice, both electrified and dry. It is an Earthquake Island for the 21st century, tugging at the corners of new ideas, taking in forms endemic to a shared imagination, and renewing the beauty there.

Bern Project
Hinterzimmer Records CD HINT08 2010
An album of new Rhys Chatham tracks with band - something you haven't heard since the Die Donnergötter recordings of the 80s... Chatham on trumpet and electric guitar, three young swiss musicians on bass guitar, drums and trombone, plus a lot of studio trickery. More punk, noise and drones than you would expect from a new Rhys Chatham record. 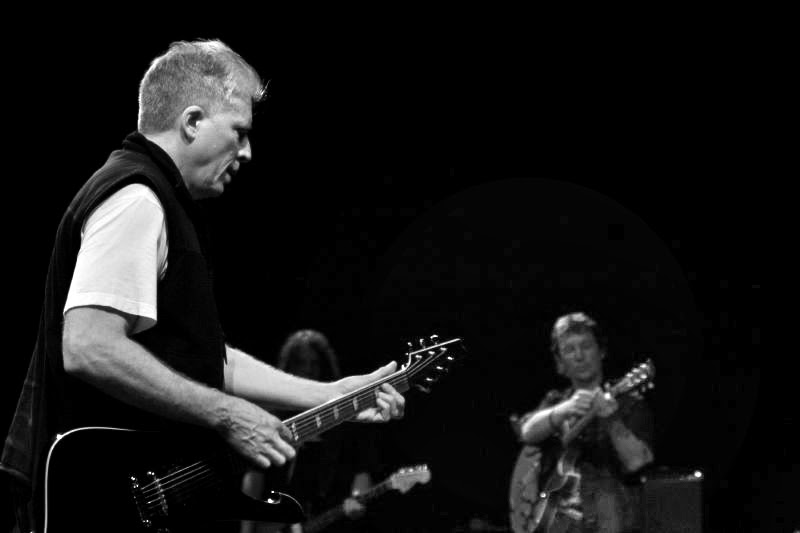 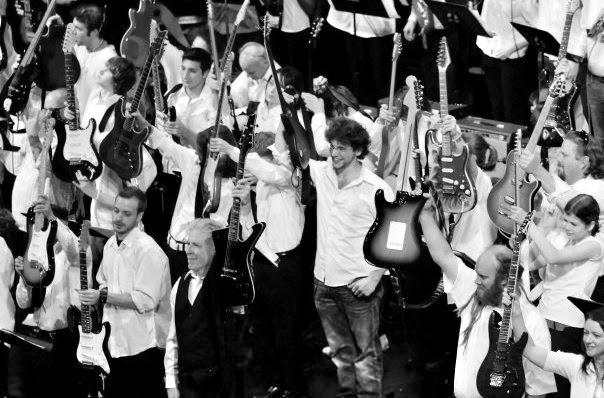