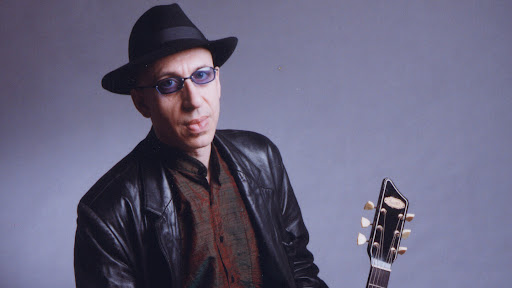 Hubert Sumlin is a hugely influential guitarist and co-writer of many of Howlin' Wolf's most memorable songs. His bright, pungent, angular guitar lines and unique song riffs form the basis of much modern rock and blues guitar. Hubert' Sumlin's playing looms large in the vocabularies of such musicians as Jimi Hendrix, Jeff Beck, Eric Clapton, Captain Beefheart, Keith Richards, Henry Kaiser, and yours truly. I've had the great pleasure of working with Hubert on a number of occasions. We had a little downtime before a concert in May 1996 and so there was an opportunity for a brief interview.

You've put out a number of records in recent years -what your favorite? Your favorite playing?

I tell you what, it seems to me that "Heart & Soul" with Little Mike, on Blind Pig, it ain't stopped yet, i still get a little money. The last one was Healin' Feelin'. About the playing, I don't know, I don't know, what it is about the engineer's got to do with the sound, but, I believe it 's something about me that they end up pushin, go to just comes out, act like they knowing me for yours, all my life.

I do, I really do now. I start to play, hey I found me a style. By listening and looking i said hey, so, "This is me." You know cause i'm so used to, a man been called so many things by Leonard Chess, Phil Chess, it got old, he stopped it. From then on , I did what I want to do with the music. By my own sound, I came by all of it after all this happened, after this incident with the Chess brothers.

Did your style start to develop when you worked with Wolf (1953)?

I think that's what happened, with him and Muddy.

What kind of guitars were you playing?

We had Kays we had Silvertones, me and Jody Williams. I don't know how many guitars Wolf had. They were Wolf's guitars.
When I first started he didn't like what i was doing. I knew it wasn't right cause it didn't sound like i was playing with him. So he fired me, kept on firing me ..and hiring me. He called me on a date, a date of need, he called me, said "Let's try it tonight."

When you came back to the band, did your style change the way the band sounded? Would you come up with parts, shape the songs? Your's guitar parts define the songs in so many ways.

I came up with the parts, the songs. I got together with the horn blowers, baritone and tenor and we made '300 Pounds'. when those horns came in, it was the greatest feeling. it's finally happening, he's doing his OWN thing. so I put the music to this thing - arrangements in the studio right there before- there was no time - we had a few rehearsals but the horns were always 'no show'. So it was no problem in the studio i just told them what parts have to be played. bup bup bup heh heh. I didn't get credit for it. At least seeing my name somewhere, that makes me feel good.

It seems like your playing has really influenced all the great players in the world, a fount of inspiration. How does that feel to you, do you reflect on that?

You know i'm glad to hear that, i'm glad to know that if i touch anybody, even touched one, you get feelings of a million, you'd be surprised how they come. If you ever heard of hypnotising, i know you have, this music, , sometimes puts you in a state of hypnosis. well, this is what it will do you. sometime, you hear things, hear things coming through and you know it seems that everybody's hearing them. when i'm reaching an audience, i feel it, i feel it before i'm knowing it.

I feel things that you don't wan't anyone to know at any particular time, I think about this i think about that, not about notes, but i'm going to make it sound right. From now on, I promise me, I have note in god, i want to fell the best, do the best. it's not that i feel i haven't paid my dues, i believe you don't get through paying these things, not until you die. just like you can't get out of this business, you may get out one year, two years or five years but you coming back, brother, somewhere down the line, like starting to walking, it's something that helps. then you going to find that your playing is going places, it starts to help. I feel proud, you feel like you can do anything you want sometimes. It's a high mountain to climb, this business, sometimes too high but we got to get over it. I believe I can go anywhere in the world and communicate.


I've seen a gang of worlds since i've been born - we survive - i sit back sometimes and think of Lightnin Hopkins and Son House, Bukka White, all these guys - the kind of music they were playing, you still hear it today, it may be scattered, you may not hear it everybody's home, but it's there, it should have gone to the moon. it's management - they could have pushed it.

Are there singers you'd like to record with or play with?

There was this girl she sung with me once, long time ago, like Dinah Washington, 14 years old, can't keep up, don't know where. maybe one night i'll be playing somewhere and she'll walk in.

When you were young did other guitarists show you things?

On the Delta wasn't too many people that was interested in showing you too much, cause they were trying to work themselves. at that time you had to be good, if you just listened. I tell you i was playing wrong all the time! (laughs) but i tell you i can't be too bad you know what i'm talking bad, I got with Cotton (James) when i had my first guitar, the one my mama bought. Cotton went and got this guitar. I saw pictures of Cotton with the clamp on the guitar. I clamped that guitar! my first clamp was a pencil with string wrapped around. I went with Cotton. Cotton said "I'll use you!" Me, Pat Hare, Cotton, painoplayer, drummer. Then i left Cotton, went with Wolf cause Wolf paid more money. Sometimes we'd make 50 cents, sometimes we'd make a dollar for a Saturday night. The whole piece! Things was back then, things were good, things were bad.

Your sound is so unique - so completely your own. What would you say to young guitarists just starting out?

Define yourself, find yourself! Just like you'd get an answer from a dictionary. Find out what you want to do! I knew at 8 years old what i wanted to do, i figured i'd be the best guitar player. i wanted to be the best at everything i did.