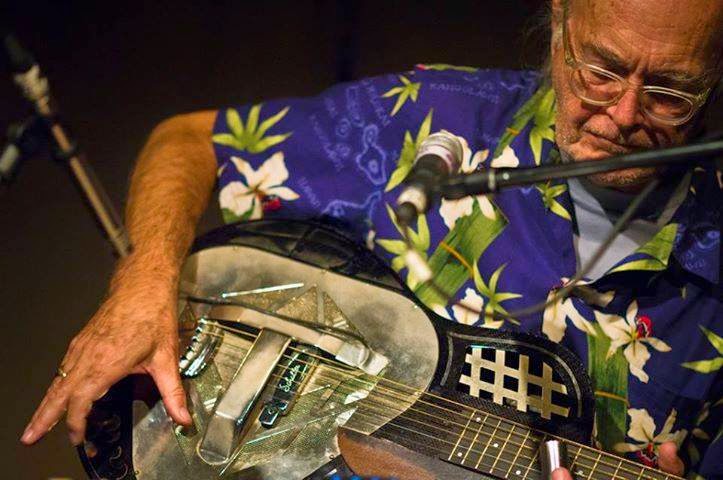 Defined as the icon of “post-everything music”, for the past 45 years the english guitarist and singer Mike Cooper has been an international music explorator that has traced, with his concerts and albums, a unique path through blues, electronics, exotic music and what remains of songwritings.
He plays lap steel guitar / electronics and sings. He is an improviser and composer, song-maker, a visual and installation artist, film and video maker and radio arts producer. His roots are in the acoustic country blues, having him been one of the few pioneers of the ’60 “Acoustic British Blues Boom” and having him played with blues legends like Son House, Mississippi Fred McDowell, Bukka White…
Cooper has deeply explored the elastic sonic properties of the guitar, maybe more than his contemporaries like Davy Graham, Bert Jansch, John Renbourne etc., driving his music towards the avanguard and improvisation attitude of musicians like Elliott Sharp, Keith Rowe, Fred Frith and Marc Ribot. His eclectic mix of styles ranges from traditional country blues to folk, from free imporvisation to pop and original songs, from electronic music to ‘sonic gestures’, using Pacific sea’s field recordings in a style called ‘slack key’, always together with his lap steel guitar.
His favourite guitar – a National tri-cone resophonic – is played acoustic and/or electronically processed through digital outboards.
All this is what Cooper calls “Spirit Songs”. 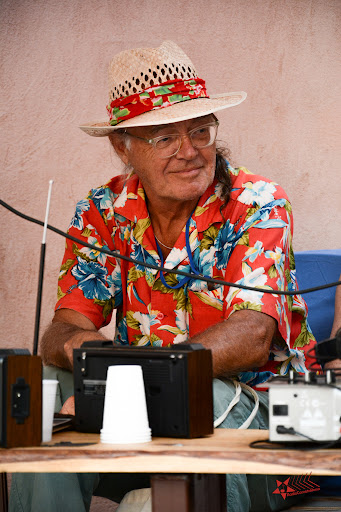 “He calls for the listener before the musician and music for him is not a grand statement: it channels a diffused mood, not made just of sounds but of visions, incidental noises, colours, stories, traditions, lyrics, images in motion.” (Daniela Cascella in En Abime-Listening, Reading, Writing).

"Every man has inside himself a parasitic being who is acting not at all to his advantage." (William S. Burroughs)

#Selfware:
a reflection about the processes that affect the individual in a phase where technology combined with business logic reconfigures the notions of identity, subject, awareness.

Within a few years we have witnessed a rapid, inexorable, tragicomic mutation in the outlooks and scenarios opened by the network and the computing machines. Exchange and sharing of information, links of intelligences, spaces of collective creation, all the initial enthusiastic promises about the potential of the digital subject must now deal with a completely different scenario.

The so much praised and liberating digital self is now captured in unsettling processes:

• the narcissistic spiral inherent to the social technologies that push him hypnotized to the meticulous assembly of his personal showcase, made of images scraps, tastes, opinions, memories and feelings, a kind of constant self branding that feeds an ever more coinciding with the media space market;

• the proliferation of user-generated content that creates a context in which the entirety of the subject, his life experience, his skills, his language performances, become de facto resources / products (at no cost), pushing in this way the boundaries of the exploitation right in the deeper areas of subjectivity;

• a subject that, with ‘like & share’, has joyfully offered himself to the refined algorithms of global capital big companies by facilitating the incessant cataloging and profiling of each of his behavior, preference, tendency, orientation as well. In short, every expressive act, each fragment of language, every manifestation of himself freely deposited on the network to communicate with others, to represent themselves, to have fun, to enjoy, is immediately captured and converted into economic value, in someone’s else pocket. Make experiences, work with passion, live intensely, cultivate your passions, express yourself, but I recommend: share it on the network. This is not authoritarian control, it’s not attack on privacy, it’s not surveillance. It’s a self-colonization. It’s the dark side of selfware.

Yet in the meshes of this self, modulated and extended by technologies, unprecedented potentials of singular and collective individuation come out. The techno-economic processes always produce surpluses that the control machine is not immediately able to recapture. Regulated spaces of algorithm triggered social engineering secrete everywhere liminal spaces where the becoming is in progress. It is about discovering, mapping, exploring them, finding the material to initiate new subjective and therefore collective practices, oblique and less docile selfwares.
It is quite not so easy task, why hide it?

As always in history, artistic experimentation is one of these places. And especially the one that identifies in the technologies not only the crest of critical reflection, but above all the terrain and elements for new machinations and for the prediction of unusual scenarios.

Electronic arts and the creative code are one of the places where all of this becomes if not possible, at least thinkable and plannable, spaces in which the algorithms and the machines can be addressed on erratic and unproductive paths. Flussi aims to explore these spaces, right now in this moment, right when the final colonization campaign of these spaces has been launched, and the subjective and social creativity itself is about to be fully targeted by the agencies of global corporations.