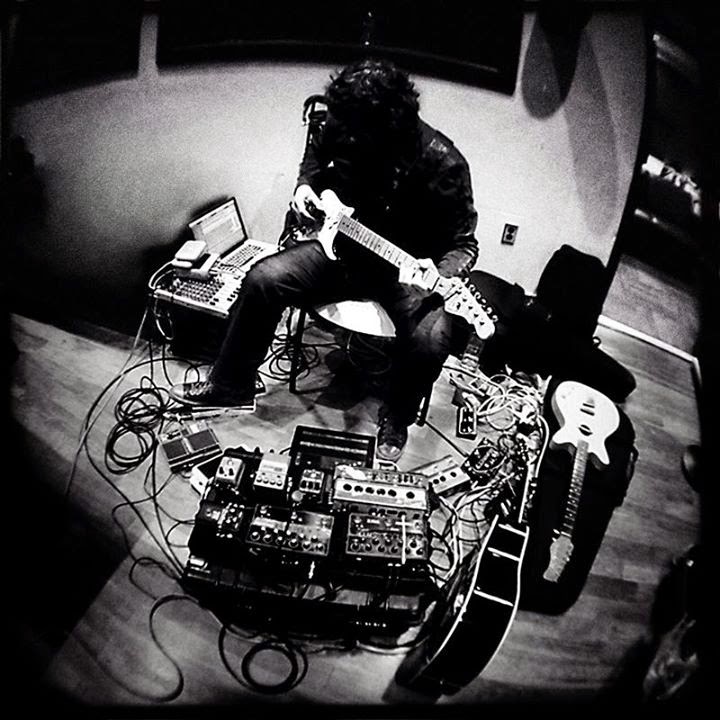 "Philadelphia based guitarist and composer Tim Motzer finds infinite joy in diversity. His output as a leader and sideman crisscrosses multiple musical universes, including jazz, fusion, prog, hip-hop, soul, electronica, and the avantgarde. Motzer gets to explore these genres and the intersections between them via his ubiquitous presence in the wildly deep and varied Philly scene, where he can be found working with the likes of DJ/Producer King Britt, spoken word/hip-hop artist Ursula Rucker, and jazz-fusion bassist Jamaaladeen Tacuma, just to name a few. He also traverses manifold territories through the many albums released on his own 1k Recordings label, including the expansive, laidback song forms of Nucultures, the crunchy jazz-funk of Jazzheads, and the solo soundscapes of his Tilomo alias among others." 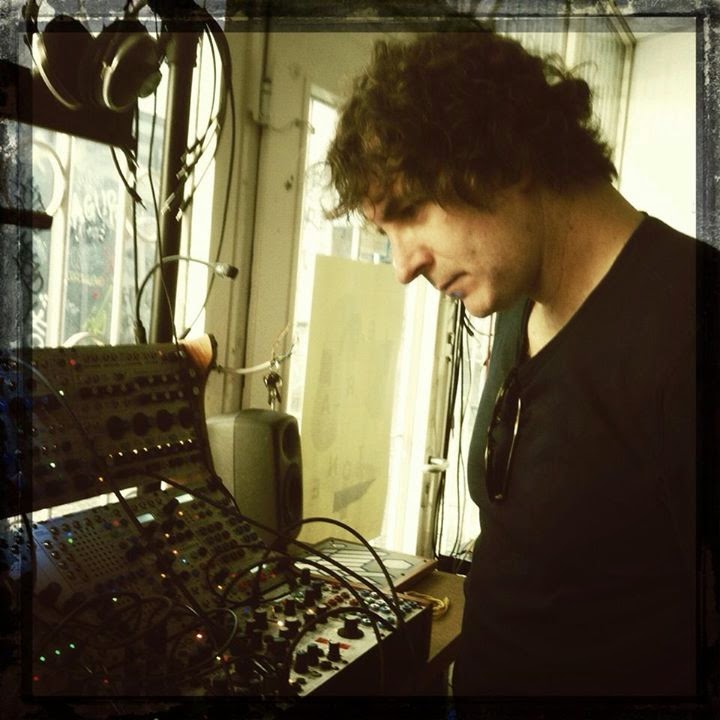 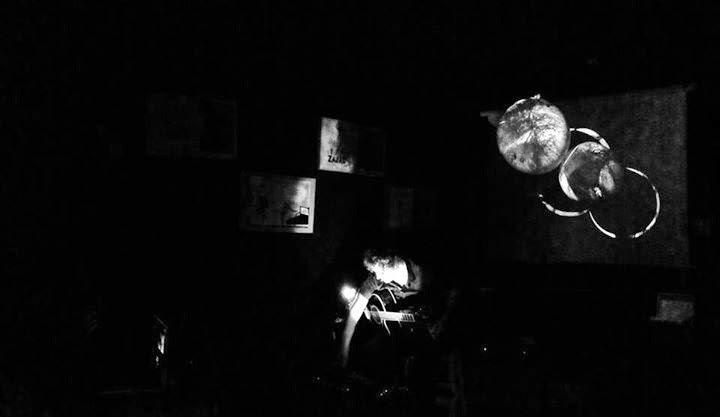 Motzer has composed, improvised, and co-produced for the album King Britt presents: Sister Gertrude Morgan for Ropeadope Records, plus collaborated with Britt on a number of classic remixes for artists including the Ojays, Curtis Mayfield, Chic, George Duke, Everything But The Girl and Plant Life, among others. He's contributed scoring to Michael Mann's films Miami Vice, and Public Enemy, as well as HBO's True Blood hit series. 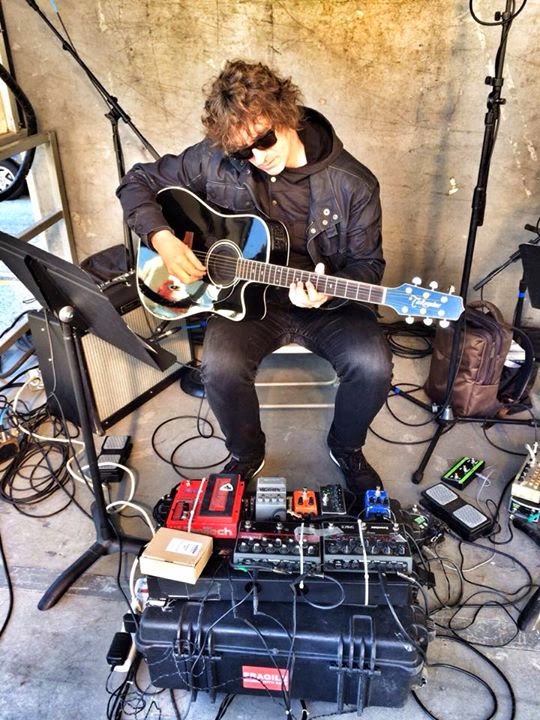 Another major collaboration is Base3, an all-improvised, experimental jazz-rock trio with three releases including their only studio recording and first CD, DarkMatter [1k Recordings]. The disc finds Motzer venturing into the outer reaches of his electric vocabulary with searing, extended soloing, percolating loops, and ethereal textures. Live From Earth is their second, and taken from a number of live shows around Philadlephia. Live From North Star is a download only and a complete live performance recording. 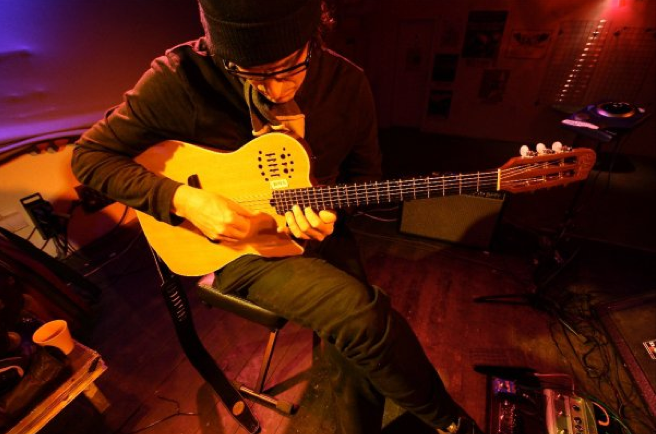 Which sound is your favourite?

Hard question. All sounds are interesting to me in some way. Maybe the rain on a cold night in Istanbul, or the sound of standing inside a bamboo forest in Hawaii.


Why did you choose to play guitar?

I grew up in a household of singers. My mom played piano and sang in big bands in late 30s/early 40s, and my two older sisters both sang and were  from the  '60s generation, so i was introduced early on to a blend of Jazz, Big Band, Duke Ellington, Ella Fitzgerald, as well as folk music, Beatles, Woodstock, and Jimi Hendrix. There was all kinds of music in my house. When I was 11, after seeing jazz guitar great Cal Collins play guitar,  i knew this is what i wanted to do. Between seeing Cal and listening to Jimi my mind was blown, and i wanted to know how to do that!

We have tremendous opportunities with recording and digital distribution.  It's easier to do things now which is good and bad. We all had to work a lot harder with earlier samplers and tape recorders. You found something special by working hard to get it. Digital audio has made this wonderfully simplified. It's wonderful to make records in your house. I think there a lot of positive things about digital, and lots of wonderful music being made. Alas, there are not any shortcuts to great music.


Which work of your own are you most proud of?

I've had the rare privilege of working with some amazing artists (David Sylvian, Jaki Liebezeit and Burnt Friedman, Les Nubians, Ursula Rucker, King Britt, and many others…) as well as my own work and collaborations on 1k recordings.  It's actually hard to pinpoint only one release. I'd have to say though being a part of Nine Horses'­ Snow Borne Sorrow was very special. I am honored to be a part of it. I've worked the majority of the Secret Rhythm series (SR2, 3, 4, 5) with Burnt Friedman and Jaki Leibeziet from Can. Another distinct honor to be working with them.

As far as my own releases on 1k,  i'd say 2005's Nucultures ­ Butterflies, Zebras, and Moonbeams.  It's a highlight of the label bringing songs, ambient, jazz, electronic, and folk together.  Working with Barry Meehan and Ellie Perez, It reached quite a few people and holds a very special place for me. I've released quite a few albums by now on 1k.

Here's a few others that i think work, and show the diversity of the music and the label.

All of these albums are inspired and wildly diverse, but were all based on the notion of searching deeply and finding beauty.

For me it's about expressing the internal.  It's a constant searching for the undiscovered, the hidden, and the uncovered—a quest to find beauty in the noise. The music is like a lens, giving the listener a new way of seeing life. I realize my compositions through improvising. if you continue to go deep enough, you can find a lot. In searching I find melodies, harmonies, rhythms, textures that can lead to songs, or a complete piece in the moment.  Even with working with dance or film, a good deal of improvisation happens in order to find the right feel and vibe. It's always about finding that and trying to express the interior human feeling as close as you can to tell a story.

“Music produces a kind of pleasure which human nature cannot do without.” ― Confucius

Yes, i don't know what I would do without music. Music is a lens that helps you see the world in a different way.  It's in my head from morning until night. Music is like water for me.  It is as deep as you want it to be. The intention behind it is key. Dive deep.

A good guitar is special. It let's your soul out. In other words, when you play,  you can hear your own songs or voice within it. A good guitar gives you freedom. It opens you up. A bad guitar locks you down. A guitar may play poorly, but could have a characteristic that brings something unique to your music. I've been collecting guitars for a long time.
The goal is to find those characters with a certain mojo that give you a certain feeling. it's very important to be you. Finding the right guitar(s) is part of that journey.

I was interested early on in just learning structures and chord progressions so i could play songs, starting with the Beatles, Black Sabbath, and Jimi Hendrix. Later i found out about Wes Montgomery, and Miles Davis. I can't really remember, but it was probably a Wes Montgomery tune. I could probably still play a bit of it. Wes was amazing. My strategy was always listening to lots of music, still is, always exploring. Sometimes i may sit down to learn something that catches my ear just to see what it is, but mostly i listen for the vibe of the music, not to directly lift ideas.  It's always about what is behind the note anyway, the soul of the note that comes from within.

I love all things art. I love reading, photography, painting, songwriting, dance, architecture, and film.  My girlfriend, Dejha Ti, works in the visual medium. She is an artist and multimedia designer. So i am surrounded by it.

In the visual disciplines, my biggest focus is on photography. I've been involved in this since late '70s with SRL cameras, but ironically now i am just using my iphone mostly as it's always with me. I post a lot of photos up to instagram. I  love to paint when i can. i've been painting since mid­90s. Musically and visually i am attracted to the beauty in abstraction, layers and texture.

I work ongoing with a group of incredible dancers and choreographer Manfred Fischbeck, director of Group Motion in Philadelphia. We have been doing wonderful work with collaboration in improvisational dance, music, and visuals. I find it takes us to places we would never get to otherwise. Dance has become a wonderful place for my work. I have been playing classes at uArts, and creating work for choreographers, and it has really been inspiring work. As far as literature, I read quite a bit, lately William Burroughs, Brian Eno's diary, Keith Haring journals, and Joe Meek's bold techniques by Barry Cleveland, too many to name,  and, of course, i've been playing with Ursula Rucker, a world renown Philadelphia poet, for about 15 years now. I love the intersection of all of this work: poetry, visuals, music, dance, multimedia, and painting. It's the best for me when it all comes together!

Fred Frith and Keith Rowe are the masters of extended technique. As far as my utilizing extended techniques, much of it has occurred naturally. Working with dancers I use a wide sound palette, including percussive sounds—with looping, i am able to create tonal & rhythmic architecture, in the moment,  while performing with dancers. Some of the tools include using alligator clips, capo, chopsticks, violin bow, and ebow.  I use an acoustic­electric guitar which enables me to utilize effect pedals: (fuzz, overdrive, harmonizer, delay, envelope, looper, reverb). I also use the body of the guitar as a drum by lightly playing the top and sides with my fingers and hands, looping the results.

I can capture beats and rhythms to build upon, or augment what i have already started with. I see it as creating architecture or a framework, although its all done live and in the moment. Sound makes me play in a certain way. If I use clips near the bridge it may conjure Balinese gamelan, kora, or kalimba—so the sound itself will put ideas in my head and make me play in a certain way. There are so many sounds in a guitar. I just experiment and improvise and find things. As I continue, I will make mental notes and remember them.

Utilizing these various sounds and blending them via looping takes me to some interesting places.  It is always ongoing guitar research and development.

Peter Gabriel, Jon Hassle.There are so many, but i am also very happy collaborating with my music friends from the deep Philly & New York landscape. I am always looking to collaborate, when it works it brings such special music.

There's many projects about. It's been very busy! In January 2014, the 2nd Goldbug album, Naacal, will be mastered that features Theo Travis on saxophone and flute, Barry Meehan on bass, Eric Slick on drums and  myself on guitars and electronics.  It's quite an epic album.  I am very happy with all of our playing and improvisations. I think we've reached some new heights with this one. Looking for a label initially, if not, than I'll release it on my label. There's been quite a bit of interest thus far.

Another on­going project is Instant Takemitsu with Dino J A Deane (Jon Hassell, Butch Morris, Cobra, Punkt Festival Norway). We are continuing with our multimedia ensemble that also features visuals by Dejha Ti. We are shopping our first video album 'small magic', and booking festivals for later this year. instanttakemitsu.com

I am also about to release a solo guitar soundscape from the WXPN Stars End radio show that I did last November.  I have  been documenting many of my solo guitar concerts and my process working with dancers.  All of this has been happening in tandem.

Finally, and hopefully, this year we will see the Kurt Rosenwinkel, Tim Motzer and Gintas Janusonus trio album release called Bandit 65. We all hung out in NYC this past weekend, and the record is being mastered now.  We are looking to play some dates roundabout April 2014.  It's an exciting time, there's lots in the air! 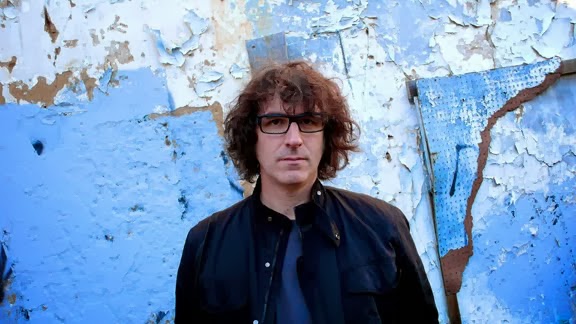