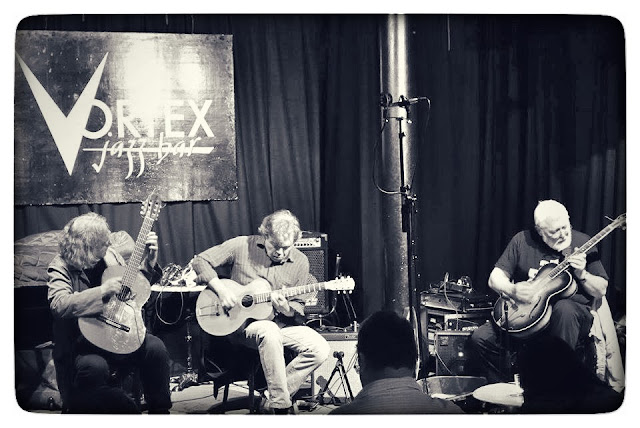 Arthur Bull has been active on the improvised music scene in Canada since the mid-1970s, & has toured and recorded extensively in a duo with fellow guitarist Daniel Heïkalo. He has performed in concert with a.o. Roscoe Mitchell, John Tchicai, Joe McPhee, Roger Turner, Peter Kowald, Paul Rutherford, Fred Anderson, Mike Cooper, Michael Snow, John Oswald, Paul Dutton, Bill Smith, Derek Bailey, Kidd Jordan and John Butcher. He is also a published poet, and an activist in the small-scale fisheries movement. He lives on Digby Neck in Nova Scotia.

Pascal Marzan is a classically trained guitarist active in Paris, his home city, both as an improviser and organiser of improvised music events. He should be well known to Mopomoso audiences where he has performed on a number of occasions. As well as his duo with John Russell (CD Translations – Emanem 5019) work with other English improvisers includes with a.o. Steve Beresford, Keith
Rowe and the London Improvisers Orchestra.

John Russell has played with many of the world’s leading improvisers and his work can be heard on over 50 CDs. In 1981, he founded QUAQUA, a large bank of improvisers put together in different combinations for specific projects and, in 1991, he started MOPOMOSO which has become the UK’s longest running concert series featuring mainly improvised music.

MOPOMOSO was founded in 1991 by guitarist John Russell and pianist, trumpeter and composer Chris Burn to promote freely improvised music in all its forms and where applicable its relationship to other forms of contemporary music making. From the outset the aim has been to present the music on a local, regional national and international basis and to involve relative newcomers as well as more established musicians.
Run by a team of volunteers we hold a passionate belief that improvised music, sometimes called free music or free improvisation offers many exciting opportunities both to players and listeners alike.