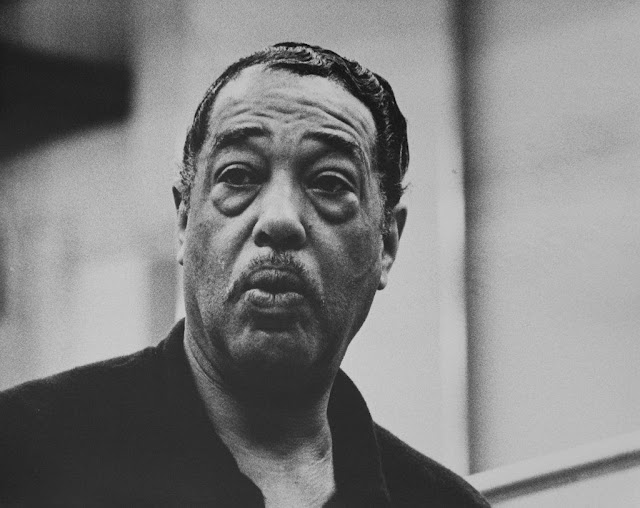 Duke Ellington called his music "American Music" rather than jazz, and liked to describe those who impressed him as "beyond category. He remains one of the most influential figures in jazz, if not in all American music and is widely considered as one of the twentieth century's best known African American personalites. As both a composer and a band leader, Ellington's reputation has increased since his death, with thematic repackagings of his signature music often becoming best-sellers. Posthumous recognition of his work include a special award citation from the Pulitzer Prize Board.

Duke Ellington influenced millions of people both around the world and at home. He gave American music its own sound for the first time. In his fifty year career, he played over 20,000 performances in Europe, Latin America, the Middle East as well as Asia.

Simply put, Ellington transcends boundaries and fills the world with a treasure trove of music that renews itself through every generation of fans and music-lovers. His legacy continues to live onand will endure for generations to come. Winton Marsalis said it best when he said "His music sounds like America." Because of the unmatched artistic heights to which he soared, no one deserved the phrase “beyond category” more than Ellington, for it aptly describes his life as well. He was most certainly one of a kind that maintained a llifestyle with universal appeal which transcended countless boundaries.

Duke Ellington is best remembered for the over 3000 songs that he composed during his lifetime. His best known titles include; "It Don't Mean a Thing if It Ain't Got That Swing", "Sophisticated Lady", "Mood Indigo", “Solitude", "In a Mellotone", and "Satin Doll". The most amazing part about Ellington was the most creative while he was on the road. It was during this time when he wrote his most famous piece, "Mood Indigo"which brought him world wide fame.

When asked what inspired him to write, Ellington replied, "My men and my race are the inspiration of my work. I try to catch the character and mood and feeling of my people".

Duke Ellington's popular compositions set the bar for generations of brilliant jazz, pop, theatre and soundtrack composers to come. While these compositions guarantee his greatness, whatmakes Duke an iconoclastic genius, and an unparalleled visionary, what has granted him immortality are his extended suites. From 1943's Black, Brown and Beige to 1972's The Uwis Suite, Duke used the suite format to give his jazz songs a far more empowering meaning, resonance and purpose: to exalt, mythologize and re-contextualize the African-American experience on a grand scale.

Duke Ellington was partial to giving brief verbal accounts of the moods his songs captured. Reading those accounts is like looking deep into the background of an old photo of New York and noticing the lost and almost unaccountable details that gave the city its character during Ellington's heyday, which began in 1927 when his band made the Cotton Club its home. ''The memory of things gone,'' Ellington once said, ''is important to a jazz musician,'' and the stories he sometimes told about his songs are the record of those things gone. But what is gone returns, its pulse kicking, when Ellington's music plays, and never mind what past it is, for the music itself still carries us forward today.

Duke Ellington was awarded the Grammy Lifetime Achievement Award in 1966. He was later awarded several other prizes, the Presidential Medal of Freedom in 1969, and the Legion of Honor by France in 1973, the highest civilian honors in each country. He died of lung cancer and pneumonia on May 24, 1974, a month after his 75th birthday, and is buried in the Bronx, in New York City. At his funeral attendedby over 12,000 people at the Cathedral of St. John the Divine, Ella Fitzgerald summed up the occasion, "It's a very sad day...A genius has passed."

Recorded off ABC-TV in Australia in the eighties - they had a "jazz weekend" with various ABC celebrities of the time introducing different shows. This concert is curious - no audience, although Duke presents the pieces as if there is. Beautiful playing.