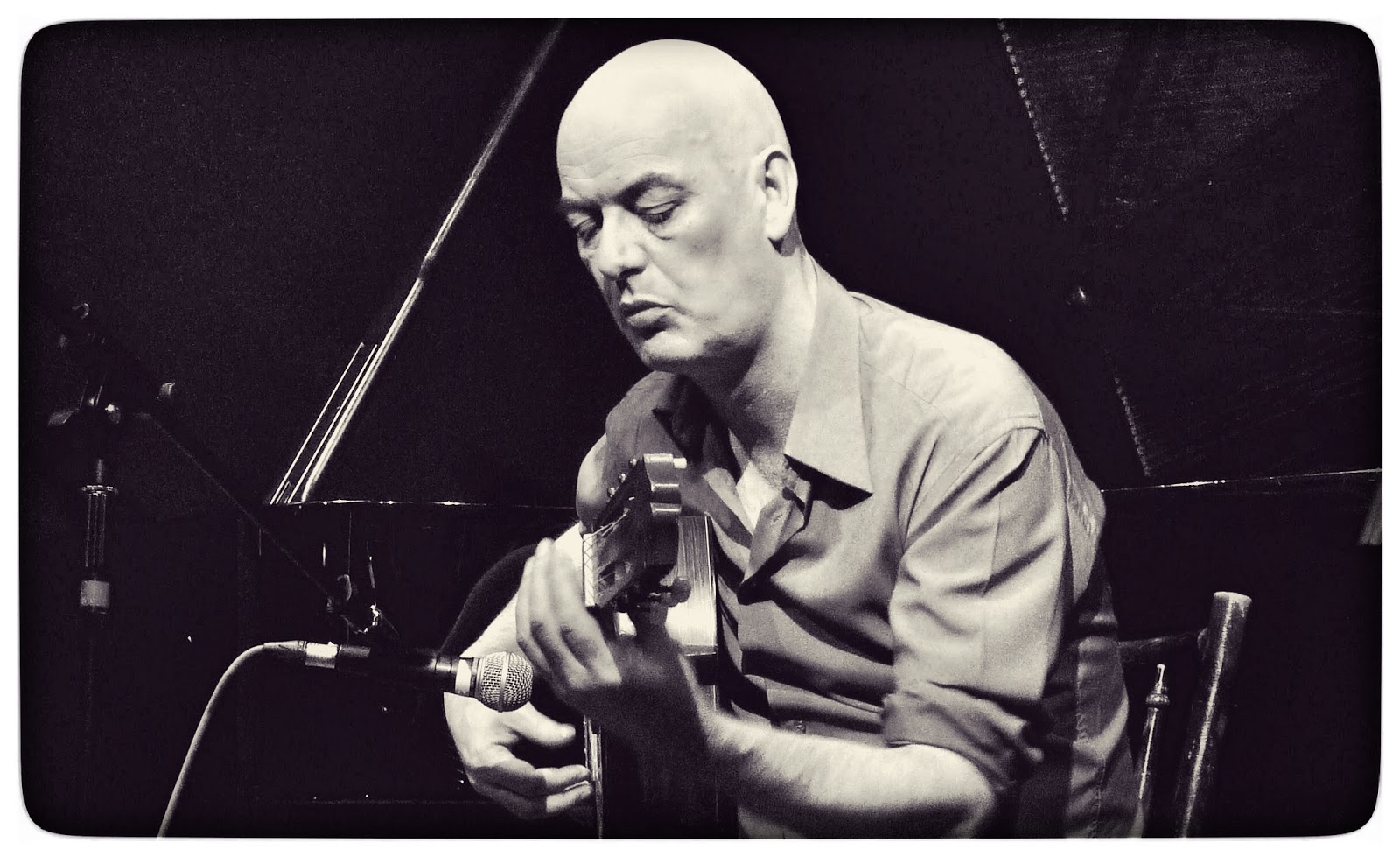 
Dave Tucker – Guitar, bass,musician, began performing in the punk movement of the 70's in Manchester. His first release was recorded in 1978 with Mellatron. In the 80's he was a member of "The Fall" tour with them doing, and recorded in "Slates" and to John Peel sessions with the group. 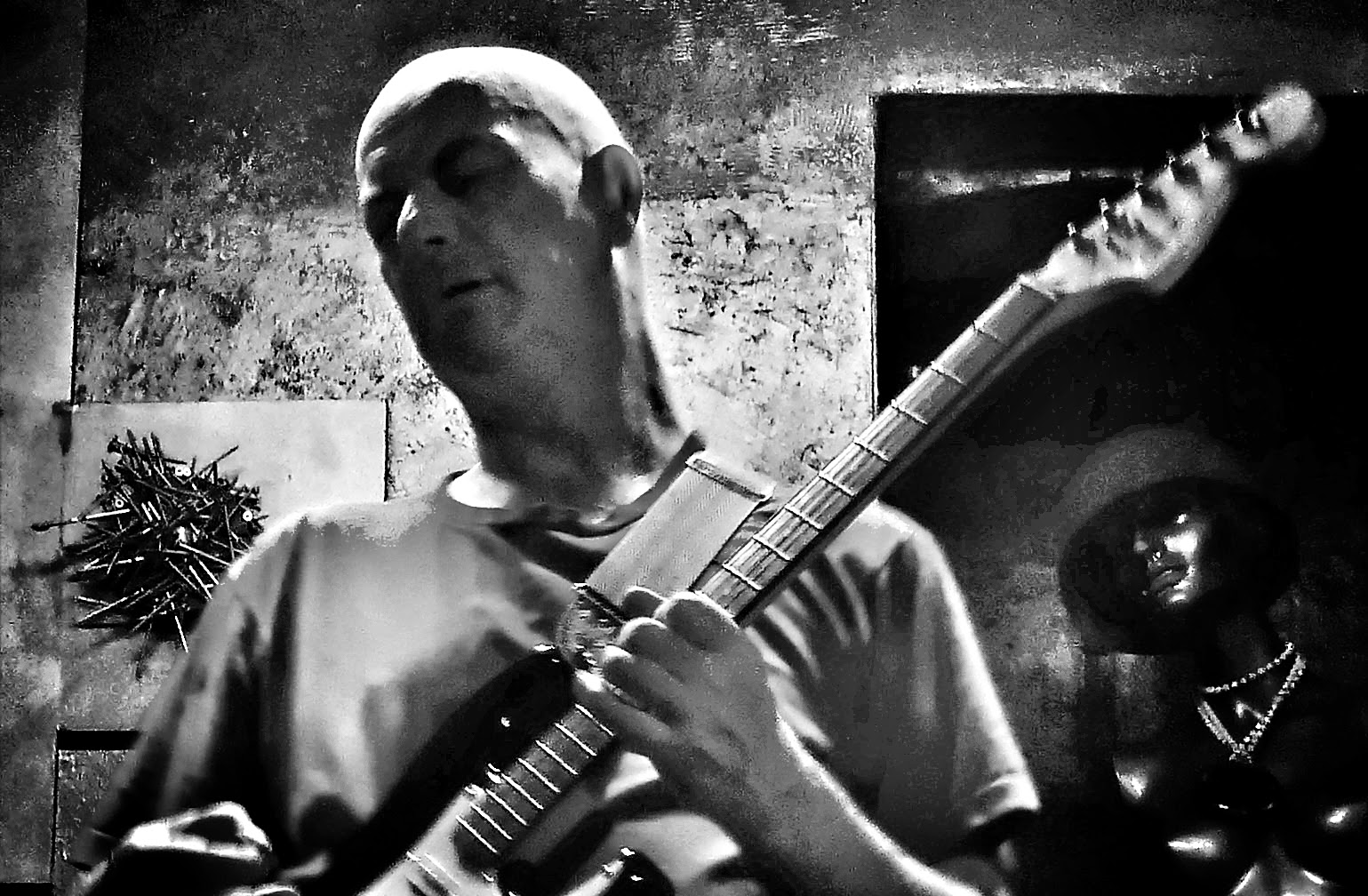 After this time he experimented with other recorded and film music. After moving to London in the mid - 80's, studied and played with Phillip Wachsmann, as well as with members of the London scene as Dudu Pukwana, Andy Sheppard, Nick Evans, Johnny Dyani & John Stevens, and many more. 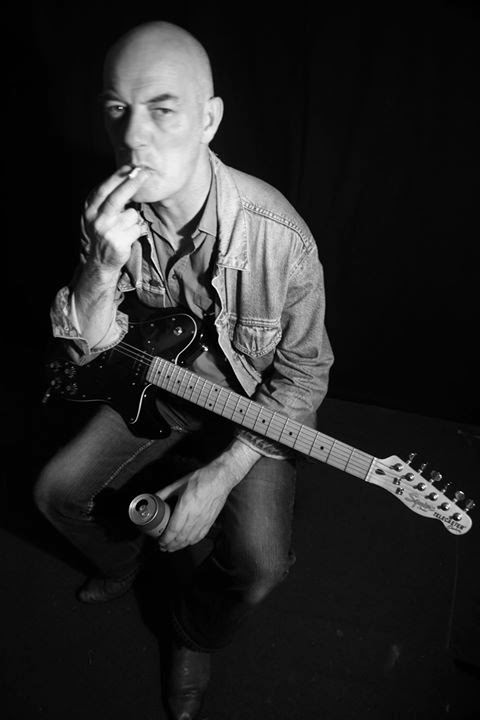 Member of Alan Tomlinson Trio since 1992, making touring Germany, Switzerland and Scandinavia. The trio also performed at many major festivals at this time. By this time also performa with many leading international musicians, including Keith Tippett, Otomo Yoshide, Charles Hayward, Barre Phillips, Lol Coxhill & Dietmar Diesner. He toured California, where is the release of PAX. As a performance duet with Bill Roper in Festivail SIMF in Seattle February 2004 and performances in New York with Lukas Ligeti 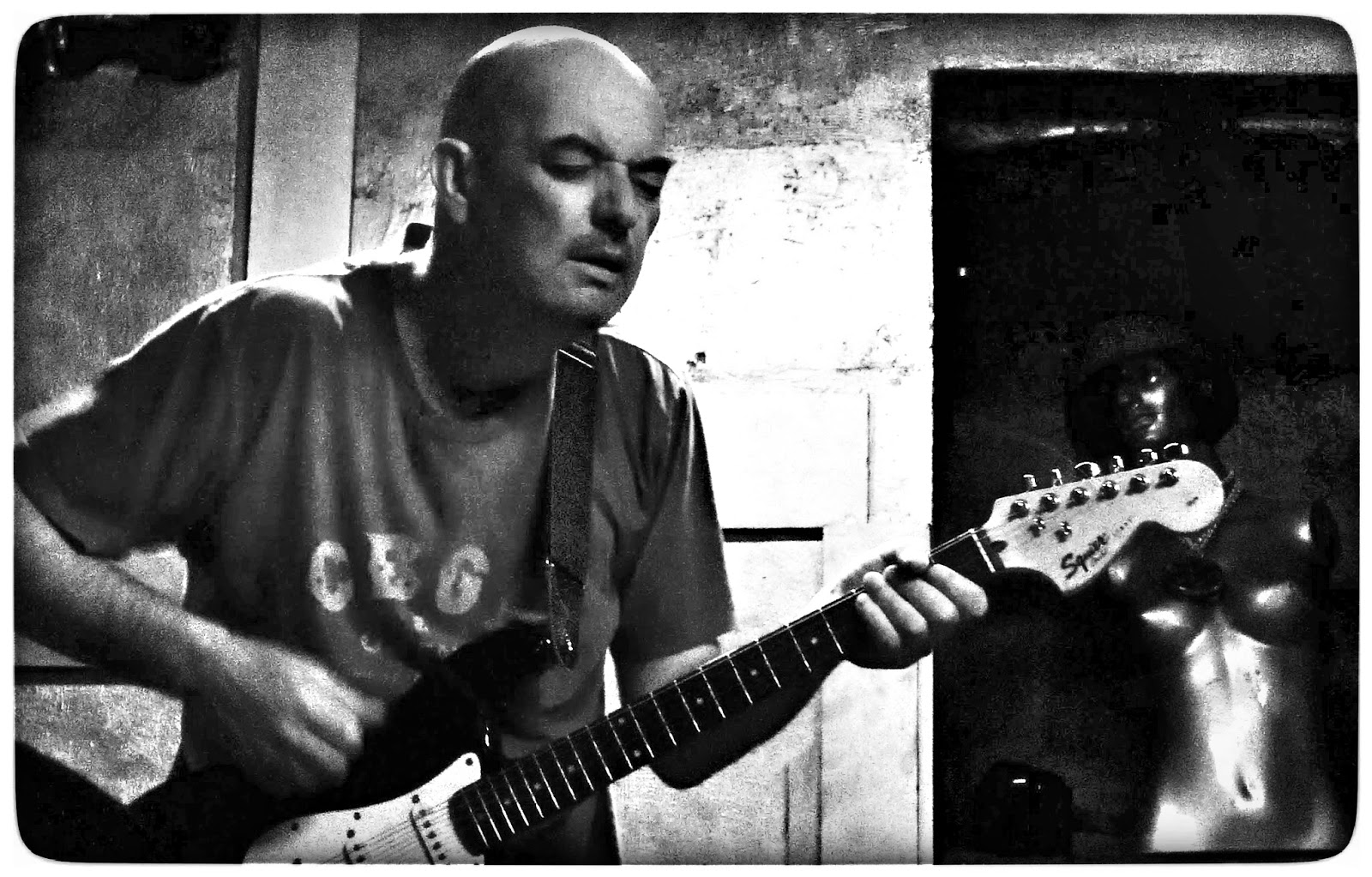 Member of  Scatter with Pat Thomas, Phil Minton and Roger Turner, who has acted in 99 Uncool Festival in Switzerland and recorded sessions for BBC radio. He currently plays in a trio with Louis Moholo & Francine Luce. A duet with John Butcher, leads his own quartet "School of Velocity" with Evan Parker, John Edwards and Steve Noble and plays guitar and leads directed Orchestra Improvisers London and Winkhaus with performance artist Anna Homler & Adrian Northover. 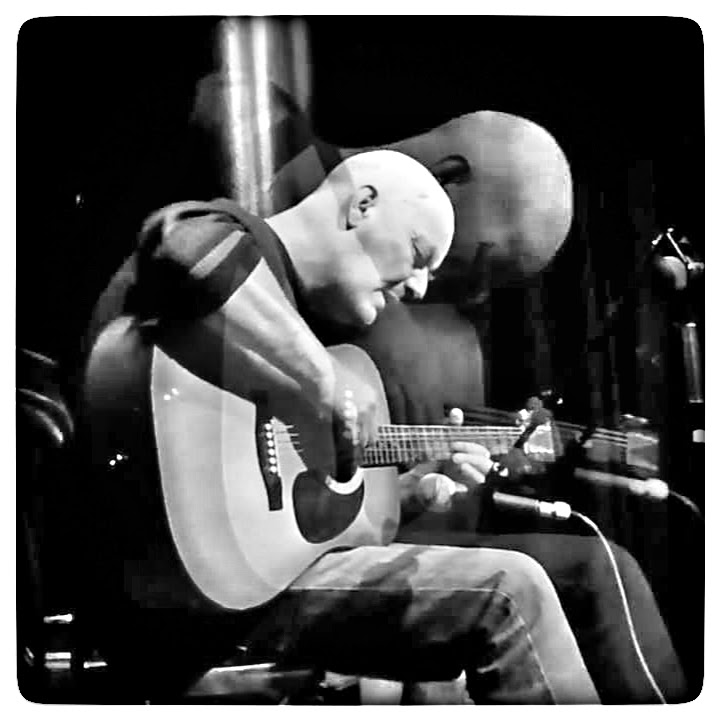 Also toured the Czech Rebublica with "Earthieves", Dave has toured and recorded with The Fall; recorded “School of Velocity” with Evan Parker, John Edwards & Steve Noble; “Ink Room” with Steve Beresford & Stephen Flinn; “Another kind of beauty” by Scatter; Phil Minton, Pat Thomas & Roger Turner, and many more besides.
Started performing and recording in the mid-70′s recording with Mellatron and in the early 80′s recording and touring with “The Fall”

Mmmm Cannot be 100 % sure but, think the first one was a budget re-issue of Alice Cooper’s first two albums. The last one was “Universe symphony” composed by Charles Ives. Seminal influences I had on record were Zappa, Beefheart, Charles Mingus, Faust, Velvet Underground, Can, Henry Cow.

I recently saw Nels Cline perform in London and was impressed enough to ask him about his setup but, I rarely do ask unless it is something out of the ordinary.

The London Improvisers Orchestra always surprise me with what is created as well as my work with Alan Tomlinson and has done for many years. Whatever project I am involved in at the time provides the focus for surprise to happen.

To be a Musician is all I have ever wanted to be. It is the creative process I am drawn to. It provides a reason for what I do and a direction for my life although it can be difficult in a world where creativity is frowned upon and becomes valued as a commodity. The practice of Improvisation in a musical context is, for me a completely immersive experience which engages on an emotional as well as an intellectual basis.

Invention. So much music that you hear is clichéd. Of course that is understandable considering the finite limitation of rhythm & harmony and works perfectly well to those ends but, my ears really seek the unexpected and when a Musician re-imagines or creates from nothing something that has its own inner logic which is difficult to predict, that I find engaging. Obviously a level of skill and dexterity on their given instrument is a must but, the use of invention is paramount for Me.

My preference is a trio, Percussion, string & horn or other. I have performed in many different contexts from solo to large ensemble and each environment has its own set of challenges. The first few times I performed solo were particularly challenging but, now, I am quite comfortable in a solo context. I usually work with a percussionist where I can but, I have a release due out with the master Saxophonist John Butcher performing duets over the years and found it to be a very satisfying experience.

Well, The obvious benefit for Me is in the context of recording & editing. I did beta testing for propellerhead reason in the early days but, my experiments with new tech within my improvisational work I always felt were not as successful as I would have wished and I have seen too many concerts where four people huddled over laptops and the sound created was quite directionless and difficult to differentiate who was doing what but, there has been some really good stuff, The German Musician & circuit bender, Joker Nies impressed Me with his knowledge and creativity. New software also presents the possibility of new sounds and new ways of working but, the main advantage for Me is the ability to make decent live recordings of performances.

I am interested in Quantum theory and I do find a correlation between aspects of the underlying processes and the music interesting, The way in which form and texture can change with the smallest sound. It does sound a bit like I am over intellectually analytical but, I do see shape and colour in sound. Is not sound air particles that are moved around?

I don’t. I am not a big theatre goer, I cannot even paint a wall white, and Architecture is on the whole functional for me although, I do understand form. I am not a huge Ballet fan. Film is different but, I am mostly interested in the editing process although I have produced soundtrack music for TV & film. I have worked in cross-discipline work before and sometimes it works and sometimes it does not. With the London Improvisers Orchestra we performed a live soundtrack to Performance Artist, Georgina Starr’s film “Theda” which was very successful. I find the bigger or more ambitious, the better, but I do not usually “translate” any other Disciplines unless it is specifically required.

Mmmm, that is a tough one. Most of the time all I heard is, “You can’t do that” “You’re playing it wrong” or “what the hell is that”.….following your own way as reflected by other Musicians which I always agreed with but, when I first did workshops in the late 80’s with the Master Violinist Phillip Wachsman, his techniques in improvising I found inspiring and it did change the way I approached improvising.

The first time I “got” Improvised Music, listening to Radio 3 on a Wednesday afternoon when I was around 15 years old under the influence of magic mushrooms. I cannot remember who it was but, it was the unforgiving, take no prisoners “Non idiomatic” style and I suddenly understood what was happening, recognised elements of my own playing and therefore legitimising what I was attempting to do. I then started to seek the music out. The first LP I managed to get was “Mr Joy” by Paul Bley.

Long term projects include London Improvisers Orchestra, The Alan Tomlinson Trio, we had a performance recently at Harwich Festival and the audience really enjoyed it including people new to the music, when that happens, it is very satisfying and validating. 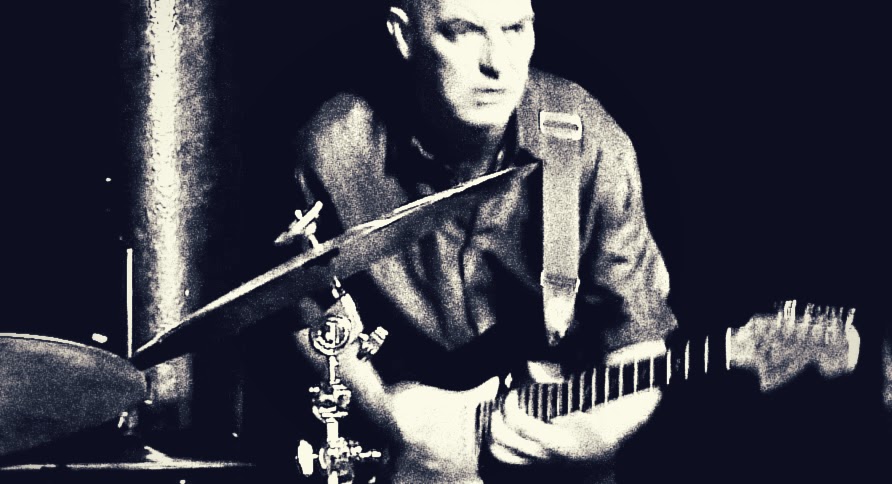