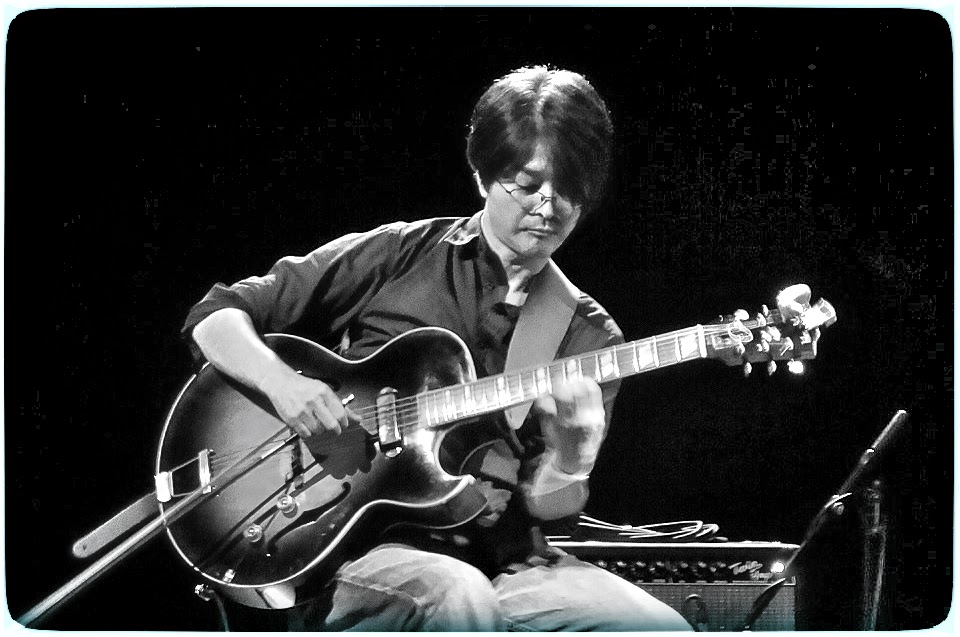 Isohata Shin'ichi was born in 1962 in Osaka. He began to play guitar from 12 years old, and soon got interested in the harmony and ad-lib of jazz, then began to study them and guitar technique by self-education.
He studied modern jazz theory and fretless guitar technique under Tim Donahue during 1982-'85. During 1985-'91, Isohata was the last student of Masayuki "jojo" Takayanagi - one of the most important figures in Japanese free jazz and a teacher of Otomo Yoshihide and Kazuo Imai.  He lives in Hyogo prefecture since 1994. 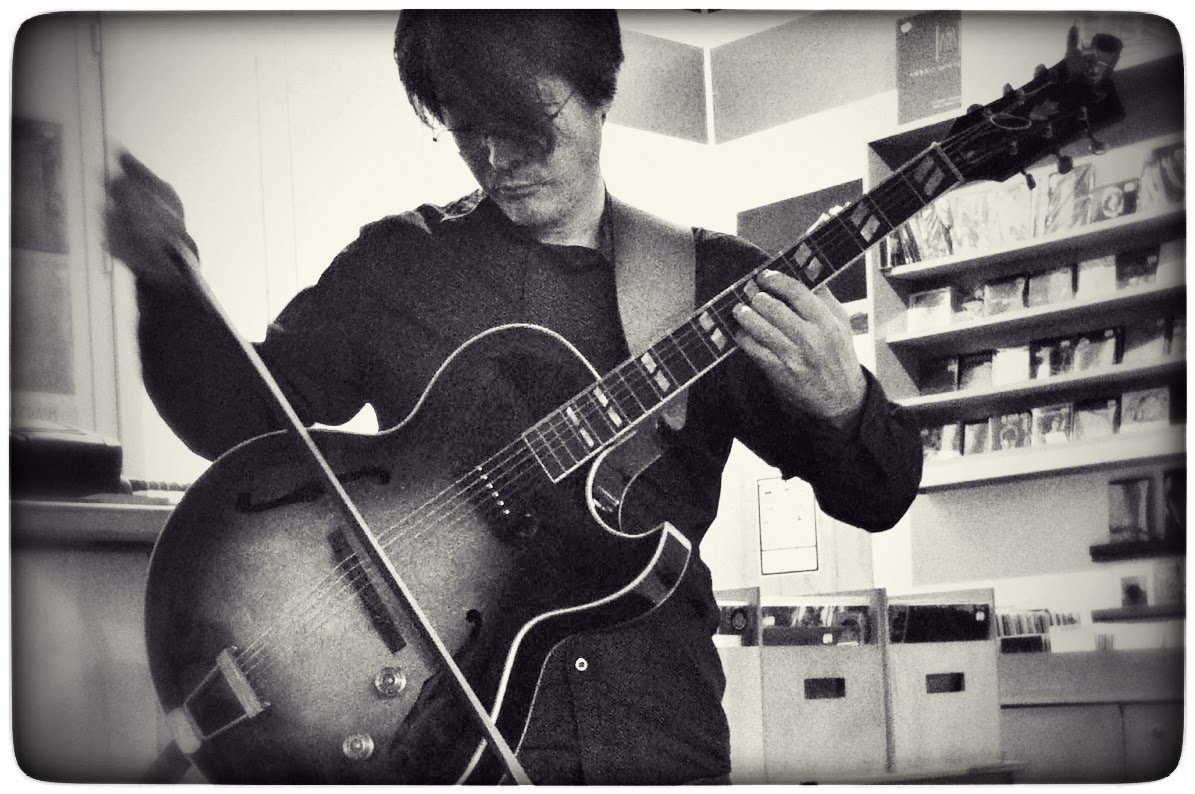 His musical activities have many variations, and he has a lot of experiences as costarring with many wonderful musicians. His guitar music consists of Images that are created from the perception, and his original theoretical structure. His music has so delicate calm sound, clear tone, and a Japan beauty. His lifework, series "EXISTENCE" was started in 1996. It aims at sharing of esthetic space with artists of other fields, also it will be continued throughout his life.

His music ranges widely, from classical and popular to noise and abstract, and developed a personal game, combining technical jazz, contemporary and a reductionist approach to onkyo: pure deep harmonics, silences and free improvised pieces like an elegant and minimalistic tribute to Derek Bailey. He also performs compositions by Taku Sugimoto and Otomo Yoshihide and has performed with Xavier Charles, Quentin Dubost, Christine Shanaoui, Yvar Grydeland, Masafumi Ezaki, Reiko Imanishi, Michel Henritzi, A qui avec Gabrie and others. 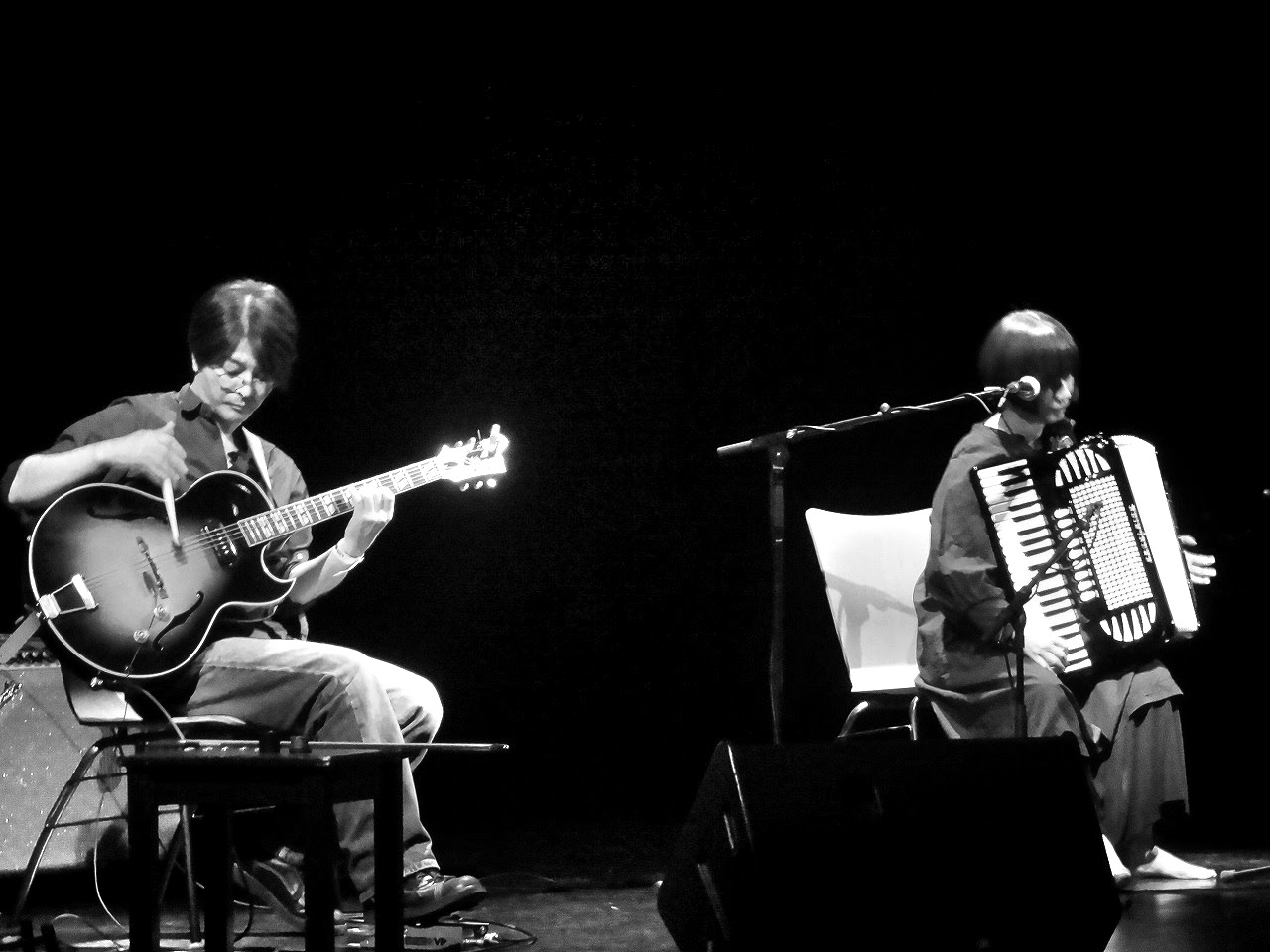 with A qui avec Gabriel
His improvisation achieves both delicacy and boldness through visual imagery and distinctive theory-based formatting. Beginning in a jazz idiom he works for deconstruct the language in a subtle and broken game, sometimes rocking in a libertarian bruitism. Today he teaches guitar in Kobe.
One of his last works is the BSO for the documentary film, "The legacy of Frida Kahlo", about the successful female photographer, Miyako ISHIUCHI's encounter with Frida Kahlo's material legacy.

I remember that I have been fascinated strongly to the strange dissonant harmony or rhythm of jazz guitar and bossa-nova music playing on the radio when I was yet a kids.  I think this experience led me to the music life unconsciously. But then my music continue to metamorphose by the influence of various music and art.

I began to learn the guitar with chord book by self-taught for playing Japanese popular song, and my interest moved soon to jazz. I found to be able to play ad-lib on the fretboard, so I played ad-lib like rock or jazz with various music indefinitely during my teenager. I learned also classical guitar method from my friend around the same time.

Why did you decide to pick up the guitar as a expression tool?

The first motive is I wanted to imitate my favorite singer who plays with acoustic guitar, and junior high school had some classical guitars, so I had no choice other than guitar.

About in recently, it is some playing with A qui avec Gabriel who is so nice accordion player at some venue for festival in France (2013).  I met her at first time before performance, and  soon we played at the big hall in Nancy. I worried a bit for playing because we had no rehearsal, but I was so surprised that we could success to collaborate amazing sound.

I was influenced from so many music. My first musical roots was Japanese popular music, or jazz and fusion guitar music.  I spent a time to copy some of them. Then, I studied modern jazz theory and fretless guitar technique under Tim Donahue during 1982-'85. After that I studied under Masayuki Takayanagi during 1985-'91, I corrected the foundation of the technique of a guitar thoroughly in Takayanagi's private school, and learned his aesthetics and philosophy of music a lot. Takayanagi, Barry Galbraith, Jim Hall, and Derek Bailey are most important guitarists for me. Also I influenced strongly from contemporary music, Morton Feldman, Salvatore Sciarrino, Anton Webern, Takemitsu, Milton Babbitt, etc..

An image from ''Peace Piece'' James Barrett and Shin'ichi Isohata


How many guitars do you have? Select only one and tell me why.

Now I have 3 archtop guitars and 1 solid body EG. My main guitar is Gibson ES 175 (1953). Old ES-175 with P-90 PU has a big and beautiful acoustic tone. And I use it because I play with bow or the string sound of head or between bridge and tailpiece.  The archtop shape like violin is convenient for bowing, or expressing various sound. Also I love P-90 PU sound to be output from amplifier.

My own music is becoming simpler than in recent years.  It may metamorphose to more simple and inorganic, or lyrical sound in the future.

What remember about your musical teachers?

The teacher I was most affected is Takayanagi. He has never taught me jazz guitar, but he taught me a lot of essences of music. It is a great energy for cultivating my music. He was a great influence in Japan on free jazz, improvisation, and noise music.

Takayanagi said reality of music does not exist yet, and also we are playing and enjoying something. It's like "music".
My most respectful buddhist monk said that all existences have everything. It means all existences are important and must be loved.

Usually I use archtop guitar (Gibson ES-175, L4C, Eastman AR610), a bow for cello, small clothes pins, pick, and a mallet for tremolo. About electronics, I use volume pedal and sometimes BOSS DD-20 to get  effect long delay time. My guitar cables are special "domon cable", they bring so high quality and good tone. I use amp AER, Polytone, Fender tube amp.

I prefer solo performance by my original music, but I like also to play with other musician, dancer, speaker by duo or small unit. The goal of our ensemble is a collaboration for mixing of each other music as one work, so that is not a session like compete for ad-lib as jazz.

Now I am working on the short pieces which was made by assembling the cell of a minimum sound. And also I would like to create a collaboration with dancers for a improvised expression like literary or theatrical.