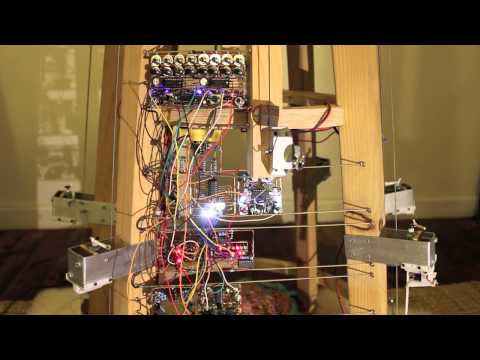 Modular Synth driven Semi-Acoustic stringed instrument. The Lunetta Guitar uses no computers nor microcontrollers, all circuitry is CMOS discrete analog designed freeform, space wiring style... no toxic circuitboards. Physically patchable with cables, no coding.
This self generating patch is acoustically recorded with Binaural microphones to pickup the spacio-harmonic sounds that swirl around this instrument. If you wear headphones it gives you the impression your head is inside the Guitar.
The synth-guitar just continues to spit out quite complex, evolving (algo)rhythms like this all day long, all by itself!

“Each module is made in free-form style (Point to point, Space Wiring) where no PCB or prototyping boards are used. Each Module will be based on a 50mm x 50mm format using SIP connectors and Breadboard jumper leads to patch the modules together. In this video the modules are temporarily affixed to a wooden frame but the Lunetta Guitar will have a grounded wire frame between each guitar neck where modules will be secured.

There first Module Ive made that is driving the motor plectrums in this video is based on the online build notes of the crazy 8Bit Cipher Gate Sequencer circuit from Non Linear Circuits Its very playable and rhythmic in a “nonlinear” sense. Next job is to get more current to the motors (or switch them out for servos) and build an ebow type circuit to vibrate each string independently. There are lots of Lunetta circuits to be found on the vibrant forums of Electro-Music“

New module for the Lunetta Guitar. An 8Band auto-switching motor gate signal interruptor Duo 4bit Slewed CV source thrown in just for good measure. I wanted the guitar to be able to switch rhythms on its own and designed this module as one that would be used in both performances and installations.

A bank of 4 solar (PV) panels, each corresponding to a motorized plectrum, are covered/uncovered with sand to alter the rhythm and timing of the actuation.
Some nice patterns evolve depending on the thickness of the sand on top of the PV panel as well as cloud cover and brightness of the sun. This recording was made with a camera mic on a windy day in the desert of central Western Australia...

First experiment with:
Contact mic on drum skin into Amp input for feedback loop.
Condenser mic into bottom tape deck record input, bottom deck records on tape and top tape deck plays back delayed recording out to PA, this delayed audio is also then fed back into the bottom deck and recorded again along with condenser mic input for a constantly evolving 'scape...

128strings string into the Music Hall.
When wind come through from the window on the top, strings start ringing and resonate in the room.
Strings are put accross the top of the room where wind blow


I have built an interface for using the Acc. Output signals from the Mighty Triadex Muse to drive circuits. In this video I have the 8 Muse outputs switched down to 4 then run through an OPAMP buffer to little motors striking a 4string instrument. The motors have silicon plectrums on them that stretch when spinning but clear the strings when stationary, they strike from the bottom. This way the motors never stall. One motor in this video is faulty...
An infinite variety of sequences is possible with this set up, it gets really interesting when the tempo and theme parameters are altered. Complex harmonics are heard through the individual pickups, rhythmic drones. This video is shot using the low end camera mic. Sorry. A weird querk is when the Muse is shut down... for some reason the motors spindown and drain a voltage.
I plan to use a similar interface as a sequencer for my Modular, but in reality the complex pulses can be used to drive just about anything


Heat test. String tension too tight. Solar Modules in trackable parabolic mirrors collecting reflected/focused sunlight, the solar energy is stored in small capacitors regulated to drain the power to small motors when a predetermined voltage has been reached, in this case 3.2v. The motor units are located in adjustable housings above the single string and strum them when this power is released. Pick is spring loaded to return after each action. Each string is tunable by means of piano tuning pegs, furthermore each string has it's own magnetic pickup so various guitar effects pedals can be used in isolation from each other. Resonating bodies made from metal drums allow the units to be used acoustically.
This was made in Perth over January/February 2011 for I.n0jaQ as an installation for the SOMETHING SMALL Festival 2011 held at Kurb Gallery.
The title of this installation is:
"Don't Green Wash Me You F#cker. Ten Sou"