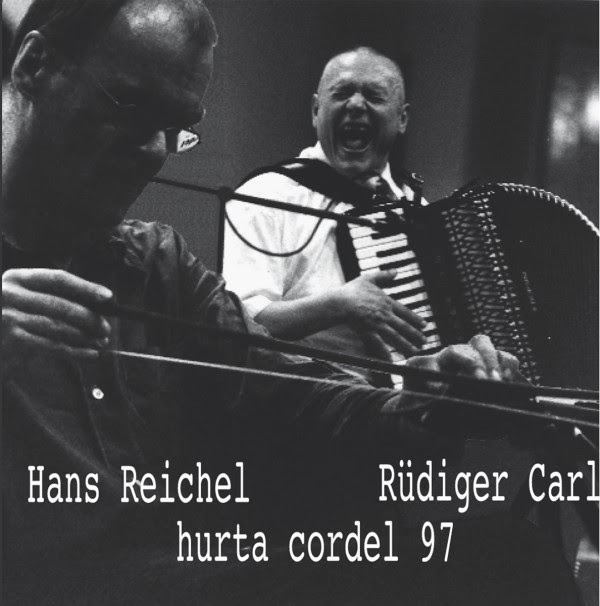 In recording terms, the daxophone first saw the light of day in 1987 on the LP (and re-issued CD) The dawn of Dachsmann. Reichel has provided detailed information about the instrument, particularly in the notes to FMP CD 46, while it has also been the subject of various intrigued commentaries such as that found in Gravikords, whirlies & pyrophones. Put simply, the instrument comprises a narrow flat strip of wood anchored at one end and which can be bowed, scraped, tapped or otherwise vibrated and whose frequency of vibration can be varied by the application of a mobile wooden block anywhere along the length. The flat strips are approximately 330 mm in length, 30 mm wide and 5mm deep; they are shaped from different woods and with different contours to provide a variety of sound generators (Photograph 1).

These 'daxophone sticks' are anchored at one end. Initially, any firm anchor was used, for example, by clamping to a table top, but more recently a tripod stand has been developed which not only holds the sticks in a more controllable environment but also provides a base for a small contact microphone (Photograph 2).

The degree of vibration of the strip - and thus it's sonic capabilities - can be varied by pressing a rounded wooden wedge of approximately 150 mm by 50 mm wide backwards and forwards along its length. This is the 'Dax'. Reichel has also produced a range of daxes, one being notched to take guitar-like frets on one side and which enables a scale of distinct notes to be created, in comparison to the slide notes on its other side (Photograph 3).

With regard to the name of the instrument, Reichel states that he had a Swedish LP called Mammal voices of Northern Europe, vol. 1 which featured wolves, rats, bats, fieldmice and also a badger (German: Dachs). Being impressed by the badger's great sonic range, the instrument was then given its name, with echoes of Adolphe Sax and then the 'chs' was changed to 'x', 'because I got fed up with having to keep on repeating the story'.
All photographs copyright Hans Reichel.