Things were turned upside down. There were terifying things in the air… they found their way into Black Angels.
George Crumb, 1990


Black Angels is probably the only quartet to have been inspired by the Vietnam War. The work draws from an arsenal of sounds including shouting, chanting, whistling, whispering, gongs, maracas, and crystal glasses. The score bears two inscriptions: in tempore belli (in time of war) and “Finished on Friday the Thirteenth, March, 1970”.

Black Angels was conceived as a kind of parable on our troubled contemporary world. The numerous quasi-programmatic allusions in the work are therefore symbolic, although the essential polarity -- God versus Devil -- implies more than a purely metaphysical reality. The image of the “black angel” was a conventional device used by early painters to symbolize the fallen angel.


The underlying structure of Black Angels is a huge arch-like design which is suspended from the three “Threnody” pieces. The work portrays a voyage of the soul. The three stages of this voyage are Departure (fall from grace), Absence (spiritual annihilation) and Return (redemption).
The numerological symbolism of Black Angels, while perhaps not immediately perceptible to the ear, is nonetheless quite faithfully reflected in the musical structure. These “magical” relationships are variously expressed; e.g., in terms of length, groupings of single tones, durations, patterns of repetition, etc. An important pitch element in the work -- descending E, A, and D-sharp -- also symbolizes the fateful numbers 7-13.

William Blake 'The Good and Evil Angels', 1795/?c.1805. William Blake
At certain points in the score there occurs a kind of ritualistic counting in various languages, including German, French, Russian, Hungarian, Japanese and Swahili.
There are several allusions to tonal music in Black Angels: a quotation from Schubert’s “Death and the Maiden” quartet (in the Pavana Lachrymae and also faintly echoed on the last page of the work); an original Sarabanda, which is stylistically synthetic; the sustained B-major tonality of God-Music; and several references to the Latin sequence Dies Irae (“Day of Wrath”). The work abounds in conventional musical symbolisms such as the Diabolus in Musica (the interval of the tritone) and the Trillo Di Diavolo (the “Devil’s Trill”, after Tartini).

Henry Fuseli Satan Starting from the Touch of Ithuriel's Spear 1779.

The amplification of the stringed instruments in Black Angels is intended to produce a highly surrealistic effect. This surrealism is heightened by the use of certain unusual string effects, e.g., pedal tones (the intensely obscene sounds of the Devil-Music); bowing on the “wrong” side of the strings (to produce the viol-consort effect); trilling on the strings with thimble-capped fingers. The performers also play maracas, tam-tams and water-tuned crystal goblets, the latter played with the bow for the “glass-harmonica” effect in God-Music.

Black Angels for string quartet was written as a response to the Vietnam War. The work draws from an arsenal of sounds including shouting, chanting, whistling, whispering, gongs, maracas, and crystal glasses. The score bears two inscriptions: in tempore belli (in time of war) and "Finished on Friday the Thirteenth, March, 1970".

Black Angels is primarily written for (in Crumb's words) "electric string quartet." Though generally played by amplified acoustic instruments, the work is occasionally performed on specially constructed electronic string instruments. The music uses the extremes of the instruments' registers as well as extended techniques such as bowing on the fingerboard above the fingers and tapping the strings with thimbles. At certain points in the music, the players are even required to make sounds with their mouths and to speak.

Each of the string players is also assigned a set of instruments to play throughout the piece. Some of the equipment requires specific preparation, such as the crystal glasses, which are tuned with different amounts of water. 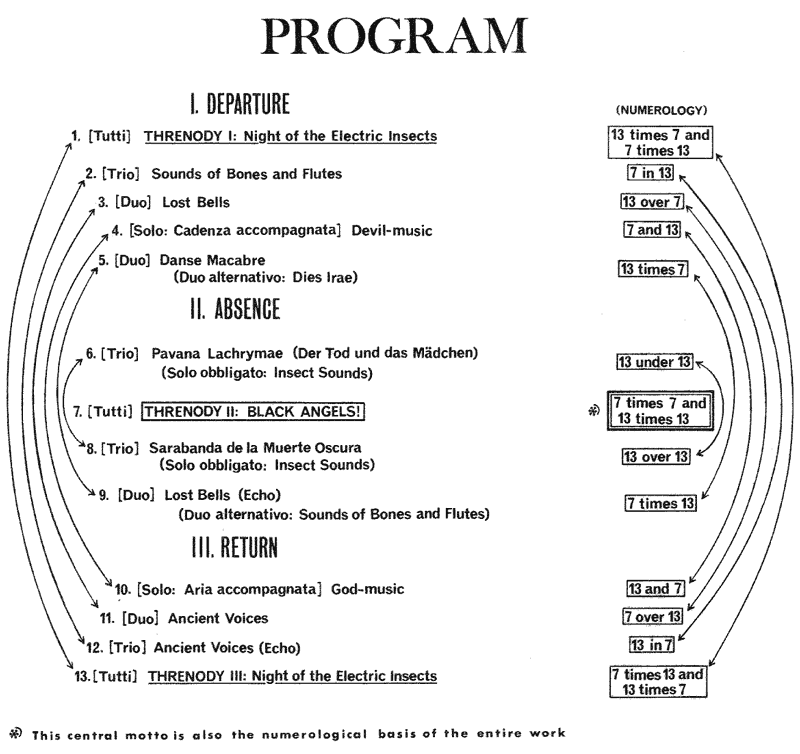 Black Angels, on the other hand, is a work of frightening intensity, where Jimi Hendrix and Pierrot Lunaire shake hands with the devil. Composed during the height of the Vietnam War, and 'finished on Friday the Thirteenth, March 1970 (in tempore belli)', Crumb's most celebrated work (which inspired the founding of the Kronos Quartet) was originally scored for amplified string quartet whose players are also required to bow glasses, shake a maraca and at a climax strike a tam-tam. It is presented here in a composer-approved 'expansion' for quartet and string orchestra.

Part of the effect of the original, particularly in live performance, comes from watching the players not only negotiate fearsomely difficult effects, such as bowing on the wrong side of the left fingers (creating viol-like tone quality), but also playing their array of percussion instruments and chanting in several languages; that heated atmosphere of intimate frenzy is lost when these labours are divided among a larger group.

Yes, this business of 7s and 13s came into the music. I don’t remember what they even mean. It was more technical, structural. I got carried away with the Friday the 13th thing. I think it is important in all music [not to reveal too much]. Beethoven doesn’t give us all of what’s in his mind. There are references to Shakespeare in his letters, but not in the score. Mahler’s Third originally had descriptive titles for all of the movements, but he dropped them. Even more abstract music is probably connected with other ideas—poetry, landscapes, and other things. [It’s better to] let the listener make the connections.
George Crumb

From the very beginning of the piece, specifically the title, it is clear that Crumb wants to bring the idea of evil to the forefront. The title Black Angels is a direct reference to the devil and therefore evil, yet even within this title the idea of good and God are present with the image of the angel. With, Thirteen Images from the Dark Land, Crumb emphasizes the 13 movements with its evil connotations as well as focuses on the idea of darkness, also an evil connotation. But, as mentioned above, the number thirteen has important Godly connotations. Crumb's decision to use electric string quartet is another focus on the unnatural and it will be shown that the use of amplification and distortion is used to promote evil in this piece.

The first movement, Threnody 1: Night of Electric Insects focuses on darker manner with the idea of threnody and night. Throughout the piece the presence of the electric insects motive indicates the presence of evil. The use of electronic amplification and distortion in this movement is pure evil. Threnody 1 is made up of predominantly melodic tritones with +2nds and few -2nds. Harmonically, the movement is mostly made up of semi-tone clusters, with some variation. The focus on the ‘diabolus in music' and the use of semi-tone clusters gives this movement an evil feeling. However, the repetition of motives in this piece focus around the number 7, a number which has good connotations.

Despite the sensational effect of his work, when Crumb speaks of his own music, it is with a curious sense of detachment, as if he is himself still discovering connections and meaning. When he completed "Black Angels," he inscribed it "finished on Friday the Thirteenth, March 1970 (in tempore belli)." As he acknowledges, the work "will probably be forever known as the Vietnam Quartet. I didn't approach it that way. It was very late in the compositional process that I became aware of associations with that period. Some have suggested that even some of the titles refer to the geography of Vietnam, such as "Night of the Electric Insects.'" "Black Angels," a 20-minute work in 13 sections, took Crumb almost a year to complete. "I came to recognize that there was something of the feeling of that strange time. That's when I called it music in tempore belli, in time of war."
But even if the composer did not have the war explicitly in mind, there was inherent subject matter that naturally lent itself to such an interpretation. "Good versus evil was part of my thinking. The devil's music is for the violin. I use Tartini's "Devil's Trill.' The cello is the voice of God." Spirituality is also conjured with a quote from the slow movement of the "Death and the Maiden" string quartet of Schubert, but the musical homage goes further back as well. "There is something very medieval for me in some of the music. It sounds like quotes from medieval music [in parts] but is actually original."

George Crumb (b. 1929) is one of the most frequently performed composers in today's musical world. Crumb is the winner of Grammy and Pulitzer Prizes, and continues to compose new scores that enrich the lives of all who come in contact with his profoundly humanistic art. Crumb's music often juxtaposes contrasting musical styles, ranging from music of the western art-music tradition, to hymns and folk music, to non-Western musics. Many of Crumb's works include programmatic, symbolic, mystical and theatrical elements, which are often reflected in his beautiful and meticulously notated scores.

A shy, yet warmly eloquent personality, Crumb retired from his teaching position at the University of Pennsylvania after more than 30 years of service. Honored by numerous institutions with honorary Doctorates, and the recipient of dozens of awards and prizes, Crumb makes his home in Pennsylvania, in the same house where he and his wife of more than 60 years raised their three children. George Crumb's music is published by C.F. Peters and an ongoing series of "Complete Crumb" recordings, supervised by the composer, is being issued on Bridge Records.