The installation suggests the motion of sea waves being extended by the use of chords. These waves come, go and cross themselves. The intention is to help the visitor to reach a contemplative state. 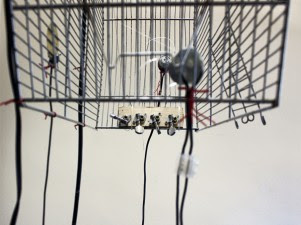 Three small motors strum irregularly four guitar steal strings that are stretched inside a bird cage. The tunning pegs allow to tune the cage. When the motors move the chord G sus 2 appears and melts into a feedback sound produced by 2 piezos attached to the object, an amplifier and a distortion pedal.

The object plays with the idea of a chord as an entity housed in the cage.

Rubén D’Hers (Caracas 1980), musician and sound artist currently living in Berlin. He studied fine arts in Caracas, Venezuela and Media Art & Design with main focus on electroacoustic composition under Robin Minard at the Bauhaus University Weimar in Germany. In Caracas, from 1999 to 2007 he was co-founder and guitarist jazz-rock band kRé. Since then he works on his solo project which highlights the use of the guitar as a main tool of experimentation.