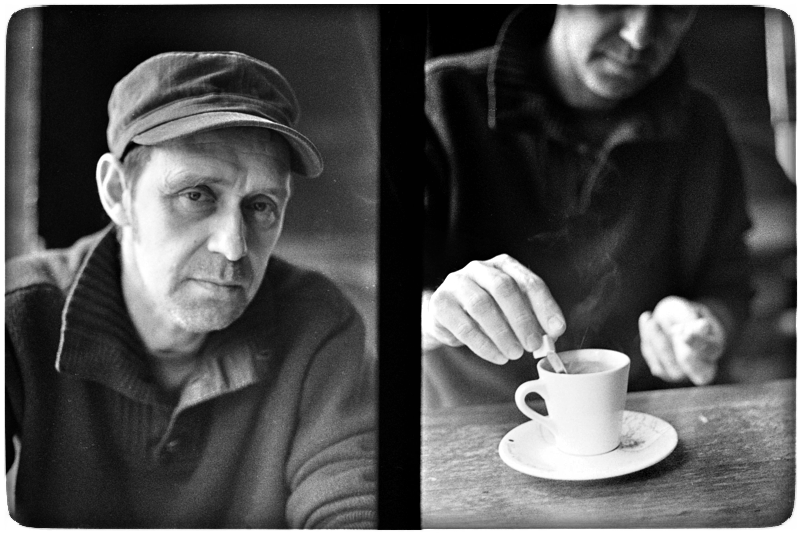 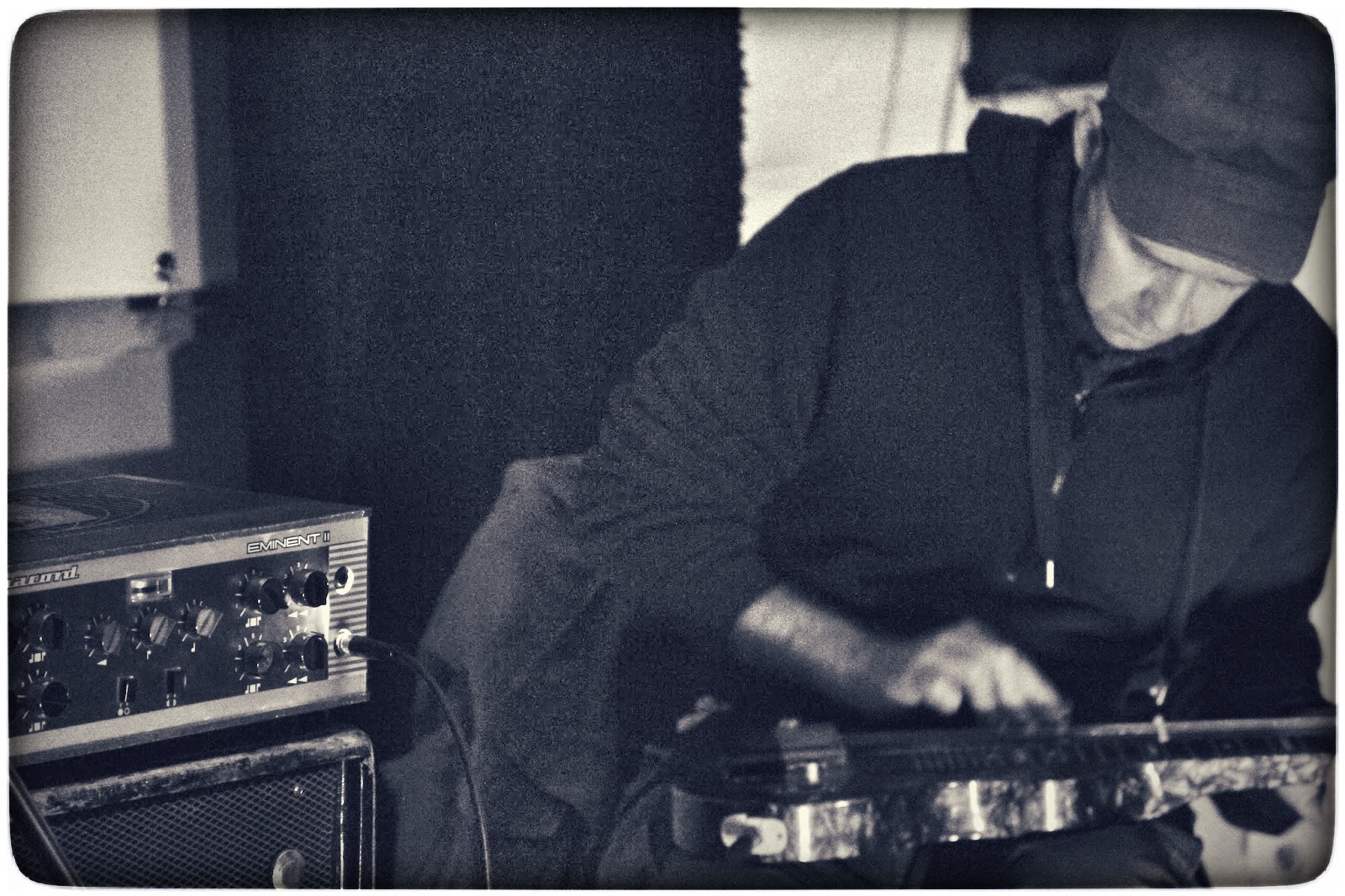 Michel Henritzi was born in Metz, France (1959), where he lives and works. He was involved in different industrial and rock bands in the late 70s, before joining the collective Nox. In 1984 he created a cassette label, AKT Production. He also collaborated with American writer Kathy Acker in 1986 on a lecture recording. 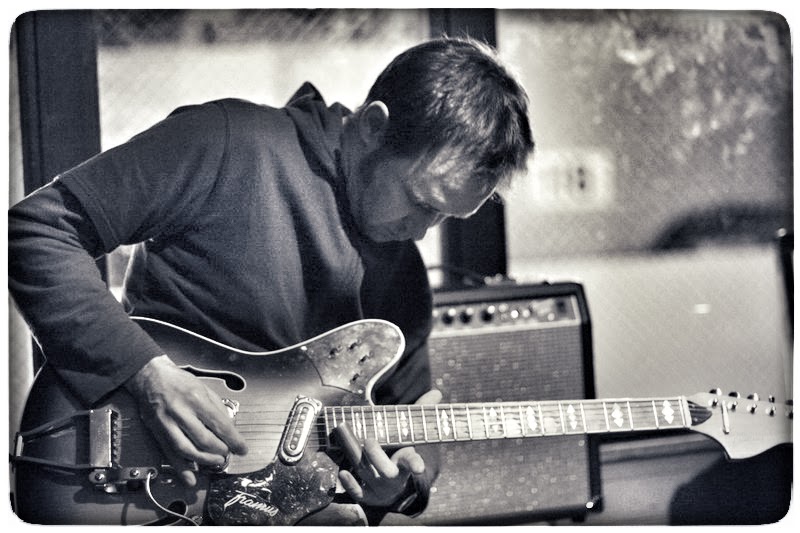 He has written extensively for different independent fanzines (New Wave, Hello Happy Taxpayer), and continues to write for Revue & Corrigée, the dictionary of independant japanese music, and the web-zine Opprobrium. Since 1988 he has been working with the band Dustbreeders, complimenting his written work with musical action. He has mounted numerous productions of different anti-records, an exhibition of vacuum-cleaner bag like a recording, and the covers of La Monte Young & Christian Marclay; he has exhibited and presented performances in art centers and music festivals in France, Germany and Japan. He currently runs the label A Bruit Secret. 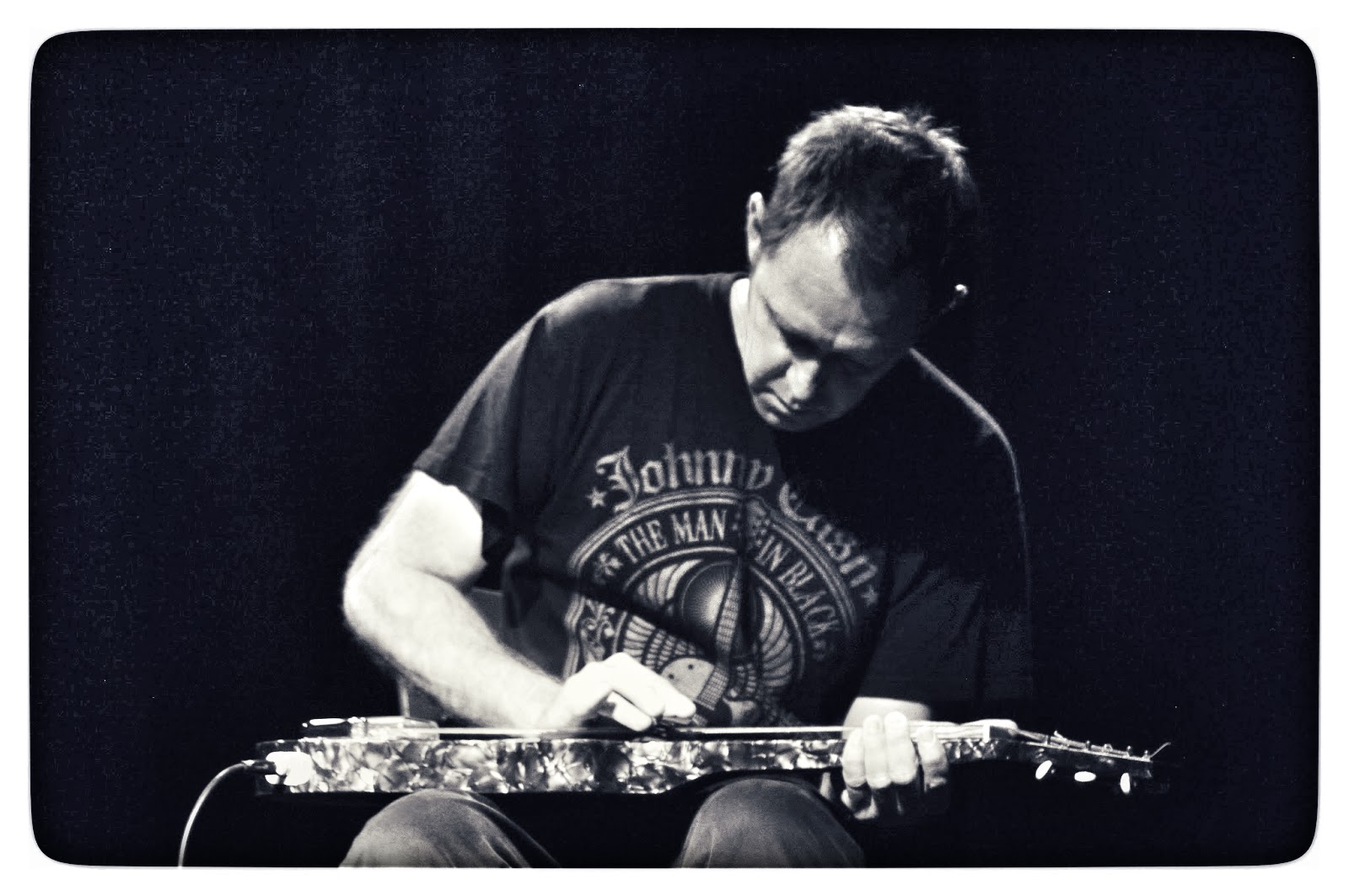 I think the first sound I identify like a sound object was church's bell ringings. That gave me deep melancolia, I didn't like this sound, it was link with death. But I took consciousness about sound around me. My mother tells me when I was young kid I liked beat saucepan with spoon or keys, I liked noise, I guess like most of childs. Later in school first music I heard was « The 4 seasons » by Vivaldi. I loved it, especially « the Winter », that moves me deeply. I was aware of music like sound object. First record I bought was Pink Floyd « Saucerful of secret ». I listen all things i could find without question of styles, I was just happy to listen many kind of music.

I speak about my blues feeling. I'm a melancolic guy. Music is a door opening on past life, lost desires and lost loves. Sometimes I express my angry too, different feelings in regard of our lifes and society. In fact that depends my projects, sometimes it is more politic like a critisism of music system with my projects with Mattin or Brandon Labelle. With Rinji Fukuoka or Junko I just try to move audience in a psychedelic trip, touch them directly by the body. I realized 3 records around my Japan world too, these records are deeply influenced by my Japan trips and musicians encounters, music like Enka or some amazing singers like Kan Mikami, Kazuki Tomokawa, Morita Doji, Maki Agasawa … 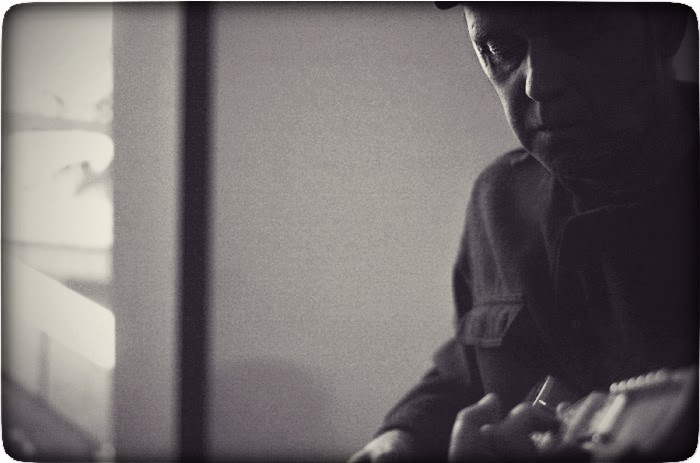 I'm still very impressed by Japanese musicians, their syncretism and how they change some idioms in their own stuffs. It is kind of example to follow for me. I dont believe about the concept of new. All musicians just deal with other musics they know, and all musicians repeat always their first stuffs. Listen Keiji Haino, Derek Bailey, Loren Connors, it is always similar, just they try go more deep inside their music world. For pop music or improvisation is same. Idea of new things is fake. Experimental music is a style of music too, an historical part from 50 to 70s. It is a non sense to talk about experiemntal music today. We just follow our way, what can we do else ?

In fact I didn't decided myself. My mother wanted I learn an instrument. I wanted play violin but it was too expensive. So I start classic guitar during 3 years. I hated that. I was very bad student. I started studied my lessons just before go to the guitar class. Most of time I was very lazy. Later in 77 when I heard the first punk records I wanted play this music myself. I bought a telecaster. But nobody wanted play with me, all my musician friends thought I was too bad guitar player so they didnt want include me in their punk bands. I was especially bad to keep regular rythms. I was very dispappointed because I thought than punk didnt know how play guitar just express themselves by sound. By chance 1 or 2 years later I heard a Throbbing Gristle record. I was astonished by their sound collages and guitar way. For me it was real punk music. So I started to play alone in my room noisy guitar with tapes mixing in this side. I used industrial sounds on cassette to mix with my distortion guitar. I was happy playing alone. Little after I discovered the No Wave. For me it was the more interesting way to follow. I had no technics but I could express myself with sounds.

To play with Junko (voice of Hijokaidan). For me it was my idol, kind of untouchable diva, i never think play one day with her. She gives me very strong power and deep feeling. So i still surprised how we sound with Junko. With Dustbreeders too, I think we had a really unique sound.

So many influences. I listen music over 40 years, every styles and genres. I heard so many things from blues to extreme noise. I care especially of guitar players, guitarists like Taku Sugimoto, Tetuzi Akiyama, Keiji Haino, Donald Miller, Loren Connors, Rowland S.Howard, John Fahey, Derek Bailey, Masayuki Takayanagi, Marc Ribot, Noël Akchote, Kevin Drumm, Blind Willie Johnson, Alan Licht… During long years I stopped play guitar, I was involved in noise music, I love feedback and amp hum. One day I saw « Dead Man » and i was impress by Neil Young soundtrack. Little later I heard a french guitar player Fabrice Eglin, he played a very sensual feedback guitar. Heard them gave me the desire to play guitar again, so I bought a cheap electroacoustic Yamaha and asked to Fabrice to play together. He accepted and we start a duo under name Howlin'Ghost Proletarians. We play kind of abstract blues with feedbacks. In same time I met a Japanese photographer Kumiko Karino and I play solo guitar on her pictures slideshow. Her pictures influenced my music too and open my ears to Japanese enka music. I tried mix Blues and enka music on her pictures. But my roots i think it is noise and industrial music. That open my mind about what is music. Now I play everyday in my room, I dont practice, just in a feeling way kind of enka blues.

How would you define "danger" in an artistic work?

No danger. What is danger for a musician? I cant believe that. Art is cut with the real world. It is just its mirror. We can broke the mirror and what? Of course some music could change our lifes or thinking views but nothing more. It is important for me but silence too. Today you can play everythings nobody take care, no fighting, no real critic. We are in consensual world and peoples know everythings in surface. Music is like paper wall. New generation likes extreme stuffs, it is just fun for them and others dont care. It is really marginal, no effects on society. Like rap or noise it is just fashion stuffs. No danger.

A blues don't sound like its roots but like mine. In noise too I try put a blues feeling. My music is blues music. Nothing more, nothing less. Maybe I arrive at an age or you dont need to impress others, you do your stuffs in your side. Sometimes I think I'm like an old story teller.

I learnt from Keiji Haino and Taku Sugimoto about time in music. Im still a speed guy but i still keep in mind the japanese concept of Ma. But most of time I forget it (laugh). I play in different duo projects and I try follow my partners in their time and space. Some music need long duration for exist full like my duo with Rinji Fukuoka, other is like a punch, you say everything in 10 or 20 minutes, you dont need more time. Time is my feeling of time. I dont know if audience has the same time experience than me. Everybody has his own time, sometimes we meet other times and something appear or not.

I'm really lucky I played with most of the musicians I wish to play with: Junko, Rinji Fukuoka, Masayoshi Urabe, Tetuzi Akiyama, Mattin, Bruce Russell, my friends Thierry Delles and Yves Botz in Dustbreeders. Today with Christophe Langlade. If i could i loved play with Keiko Fuji (enka singer suicides last year). Maybe with David Eugene Edwards, I'm fan of his folklore. Be a sideman of Kazuki Tomokawa or Kan Mikami. Few years ago maybe I gave you very different answer, I was more interested by so called experimental music, today I don't care about modernity, new. It is just a fashion or an empty concept.

In Marc Ribot interview he wrote « use your mistakes, your blunders, amplify them, it is part of you of your sound ». I still keep this advice in mind. It was great lesson.

I have an old Framus television guitar, i love it. I have several lapsteels too : National, Oahu, Rickenbaker, Harmony, Hofner, Guyatone … I play more and more lapsteel especially in my noise and psychedelic projects. I use many guitar effects boss and mxr. And Fender amp. In Japan my friend Rinji lends me a Gretsch solidbody guitar, i like gretsch sound. I like buy an Harmony guitar or a Jazzmaster, but no money yet. 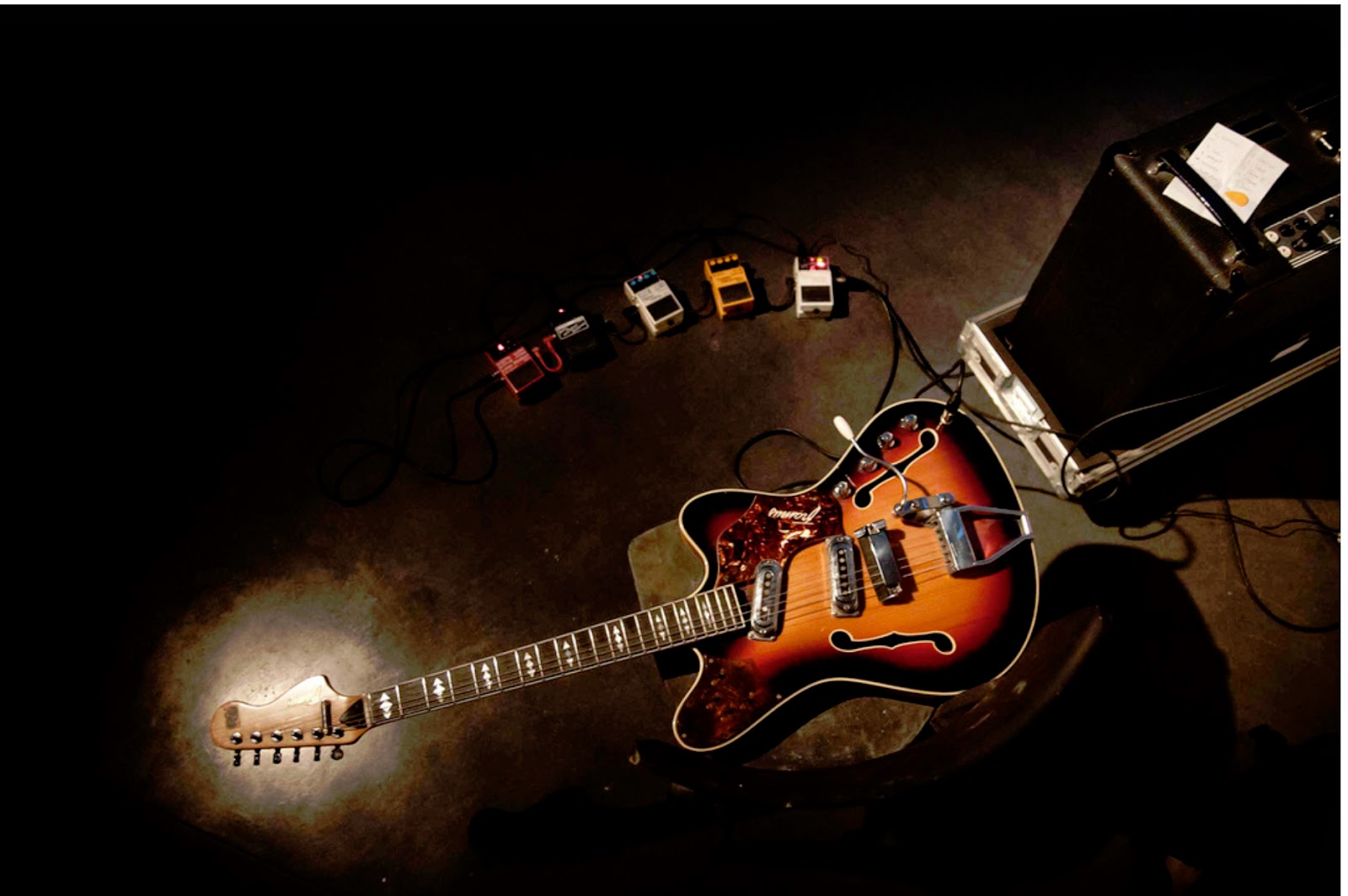 
After i plug my guitar, before my sound dies.

I have several projects I'm working on. A duo with Japanese guitar player Shinichi Isohata, covers of Keiko Fuji. New recordings with Rinji Fukuoka inspired by Tony Conrad and Henry Flynt. I finished recordings with Junko, kind of rock'n'roll tracks mix twang guitar and her screamings. Our new guitar duo band with Christophe Langlade named O'death Jug, we have 3 records ready but no label (laugh). I plan a duo with Tetuzi Akiyama and songs recordings with A Qui Avec Gabriel on accordeon. I finished some soundtracks for 2 movies too. And we play again with Dustbreeders after long months we stopped. 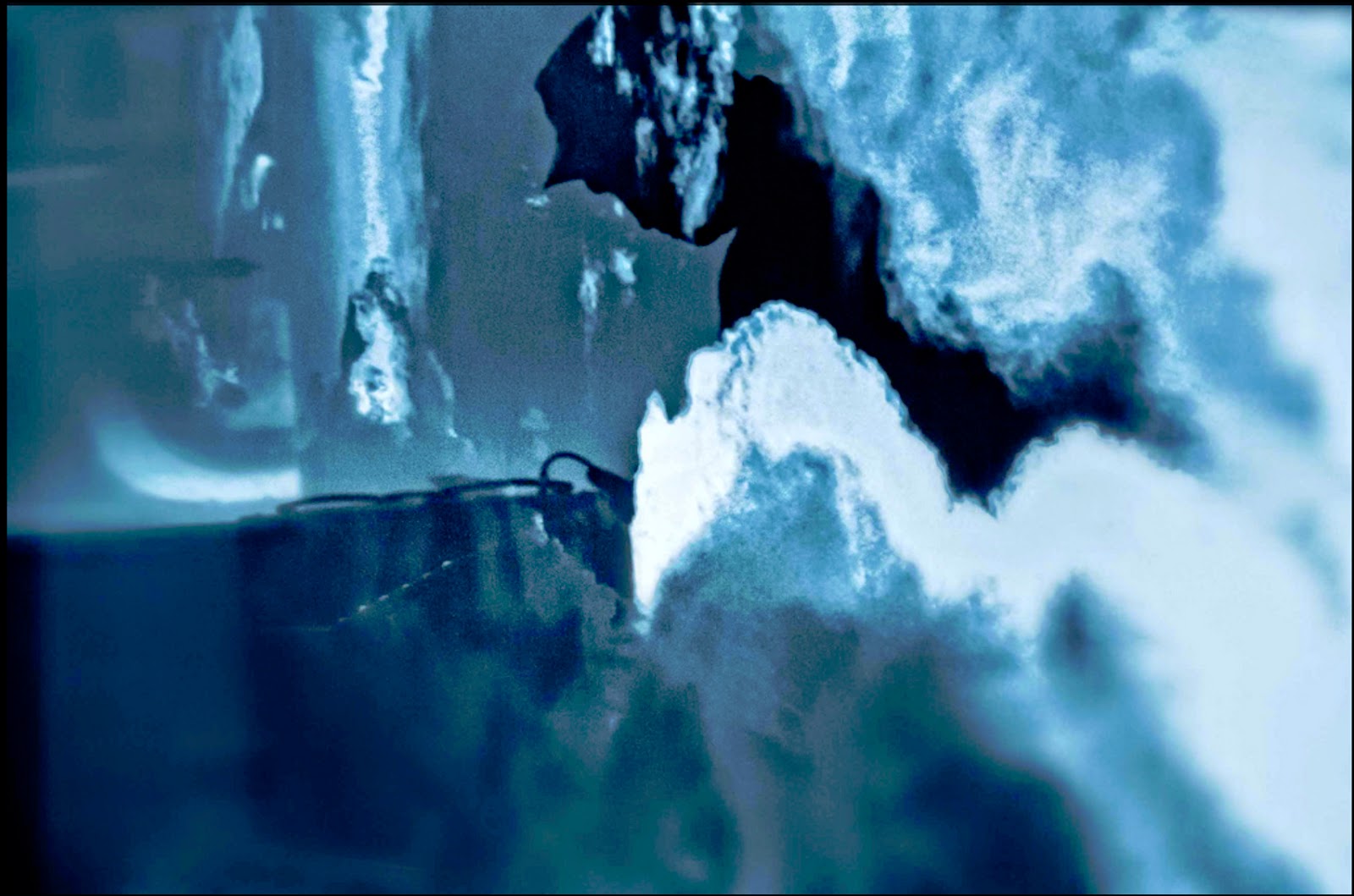 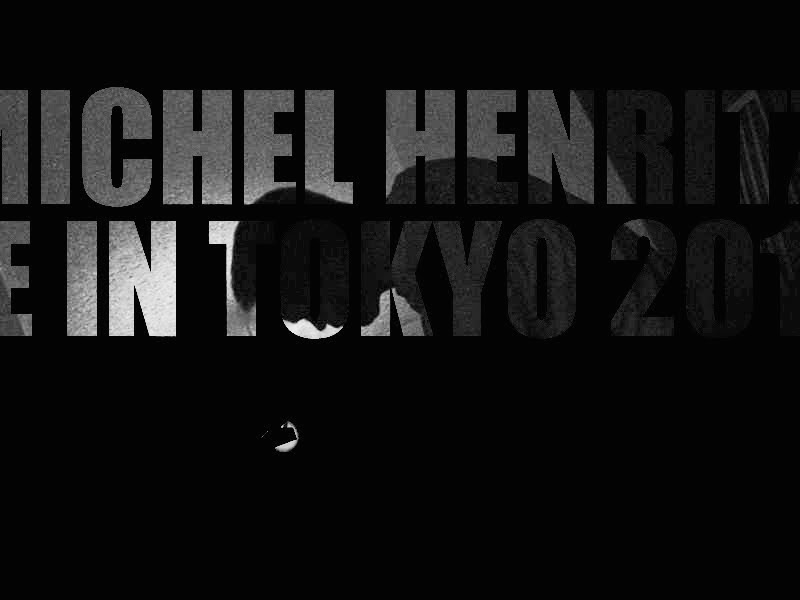