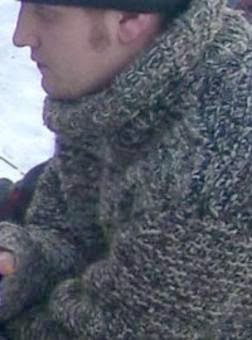 Sokpb Avabodha - one-man experimental project from Ekaterinburg, Russia. The sound texture is based on prepared sound of acoustic and electric guitars, a widely used field-recordings and various improvised means. Real name: Alexander, born in 1981. Live in Ekaterinburg, Russia. No professional musician, family man: wife, son, cat and 3 snails. By the way, you can hear his son on one of his latest releases "solo guitar & field recordings", amateur and fond of music since childhood. Of course it turned into attempts to create something himself. First it was the attempt to use another's samples. Later he discovered some unusual ways to use sound acoustic and electric guitars that actually defined his creative path in the coming years. He has collaborated with musicians as WMRI, Soft Note and groups as Bipolardepth.

There is no intention to adhere to the agreements of any styles or trends. As a result, the output is a strange mixture of dub, drone, ambient sound and abstract forms: sound structures evolve from dense to transparent landscapes. The scheme, as the music is relaxed: no agreement, no plan, everyone plays on what pleases, someone joins in the process, someone suddenly goes to drink tea or smoke. Pure Time into sound.

If memory serves me, it was the disc of Russian trance duo Radiotrance "To The Stars! (Through Thorns)", bought with the students' scholarship.

I don't know, I'm not looking for the sound, sound is forming during the process. But I love the raw crude dirty sound, with all sorts of noises, backgrounds and extraneous sounds. I love lo-fi.

I was about 10 years and It was solo from the last part of "Princess Of The Dawn" by German heavy-metal band Accept. Somewhere at the same time i learned Russian folk song "Yablochko" and solo from Accept's "Metal Heart" nee Beethoven's "Fur Elise". Maybe they were first. I think I'm still able to play it.

I think it is my first released record "trava": there's something minimalistic universal and the same time gentle and melodic.

What’s the main pleasure do you find in music?

What pleasure do you find when you breathe air? Music has become an integral part of me. I just can not live a normally without her.

Do you remember any useful advice from another musician?

I think good guitar - is guitar on which you want and love to play, bad - all other

What gear do you use and prefer in your musical compositions?

I'd really like to use a bunch of analog devices, but I do not have the funds for this, so almost all of my guitar compositions recorded using a cheap guitar processor and Kaos Pad.

I dream to learn to play on drums like Paal Nilssen-Love. :)

My roots are hidden in classic rock and classic electronic music, such as J.M.Jarre and Kraftwerk -  i listen to it from childhood.
In the early and mid-90s i was fond of techno, breakbeat and acid jazz. In the late 90s I knew residents of Warp label, which has opened for me a completely different musical horizons. Actually from this began frantic swallowing all possible unusual styles of music ranging from the academic avant-garde and ending noise and free improvisational music.

If we take the style of my compositions, there is certainly a great influence of Aidan Baker, Brian Eno, William Basinski, Ben Frost.
And of course I can not to not say about the huge influence on me of theories and views of the Russian composer and philosopher Vladimir Martynov, after reading which books many fragments of thoughts in my mind has developed in a quite coherent picture.

I don't have any projects. I have several tracks and thoughts, which sometime may fold in any certain conception.