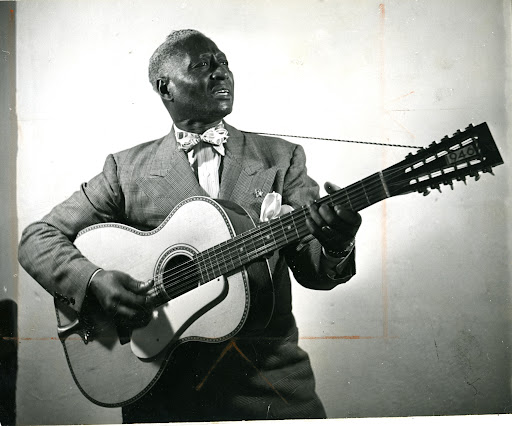 Huddie Ledbetter, better known to the music world as “Lead Belly” was born January 20, 1889, in Mooringsport, Louisiana (near Shreveport). Lead Belly was the only child of Wesley and Sally Ledbetter. Lead Belly first tried his hand at playing music when he was only two years old. As a young man he was introduced to the guitar by his Uncle Terrell Ledbetter and from that moment on he was electrified by the guitar. He mastered that instrument and just about any instrument he laid his hands on. He learned to play the accordion, mandolin and piano. Which gave hime a wide knowledge of various musical instruments and rhythm. It has been said that one day Lead Belly witnessed a Mexican guitarist playing the twelve string guitar which struck his interest in mastering the unusal instrument. 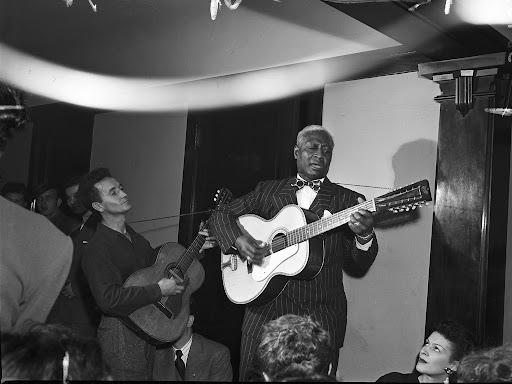 After the 8th grade, he quit school and, by the time he was 14 years old, he was a popular musician and singer in the weekend “sukey jumps” and “juke joints.” He later became known as the king of the twelve-string guitar and “Stella” as he affectionately called his guitar became his ticket to life and his freedom. Leadbelly was passionate about his love of music. It was his way of expressing what was written on his heart and soul. This love of music led him to leave his father’s farm at an early age to pursue his music. Huddie traveled the southwest playing his guitar and working as a laborer when he had to.


Huddie was legendary for picking 1,000 lbs of cotton a day, and lining the railroad tracks.

Lead Belly once said, "When I play, the women would come around to listen and their men would get angry." In 1918, he fought and killed a man in Dallas and was sentenced to thirty years to be served in the state prison in Huntsville, Texas. In 1925, he wrote a song asking Governor Pat Neff for a pardon. Neff, who had promised at his election never to pardon a prisoner, broke his promise and set Huddie Ledbetter free. Back on the road with many new songs he had learned or written at Huntsville, Huddie again found enthusiastic audiences throughout the south. But, as the center of admiring crowds, he was again the target of envy and jealousy. In 1930, after a fight at a party, which was normal in the Jim Crow south he was sentenced to another prison term in the infamous Angola Farm prison plantation in Louisiana. In a way, this was a stroke of luck, because he was discovered by folklorists John and Alan Lomax, who were recording prison songs for the Library of Congress. John Lomax and his son Allen, who brought him to New York where he played on college campuses like Harvard, Priceton, NYU and the list goes on. He was received with great acclaim.

Shortly thereafter Lead Belly relocated to New York, where he forged a reputation on the folk circuit, making personal appearances, recording for a variety of labels and doing radio work. In the early 40s he performed with Josh White, Sonny Terry, Brownie McGhee and Woody Guthrie. In 1948 Lead Belly cut, with the aid of the newly invented long playing record, what would later become known as his Last Sessions, a definitive document of The Life and Music of the King of the Twelve-String Guitar. Lead Belly enjoyed national recognition as a blues and folk musician and singer. Lead Belly felt his music and talent were gifts from God. His songs could not be put into one category. He wrote children’s songs, field songs, ballads, square dance songs, prison songs, folk songs, and blues. 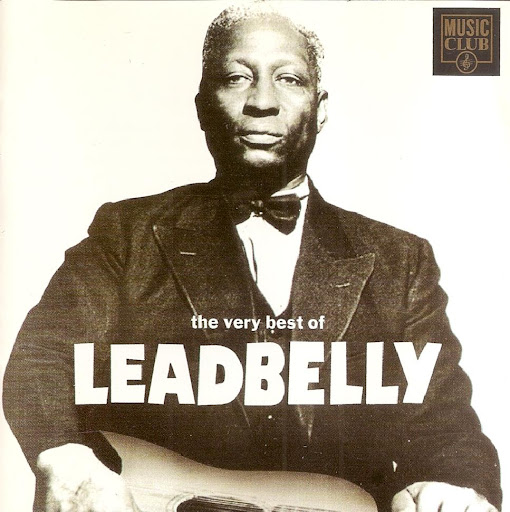 Lead Belly styled himself "King of the 12-string guitar," and despite his use of other instruments like the accordion, the most enduring image of Lead Belly as a performer is wielding his unusually large Stella twelve-string. This guitar had a slightly longer scale length than a standard guitar, slotted tuners, ladder bracing, and a trapeze-style tailpiece to resist bridge lifting.

Lead Belly played with finger picks much of the time, using a thumb pick to provide a walking bass line and occasionally to strum. This technique, combined with low tunings and heavy strings, gives many of his recordings a piano-like sound. Lead Belly's tuning is debated,[by whom?] but appears to be a downtuned variant of standard tuning; more than likely he tuned his guitar strings relative to one another, so that the actual notes shifted as the strings wore. Lead Belly's playing style was popularized by Pete Seeger, who adopted the twelve-string guitar in the 1950s and released an instructional LP and book using Lead Belly as an exemplar of technique.

In some of the recordings where Lead Belly accompanied himself, he would make an unusual type of grunt between his verses, best described as "Haah!" in many of his songs such as "Looky Looky Yonder," "Take this Hammer," "Linin' Track" and "Julie Ann Johnson" feature this unusual vocalization. In the song, "Take this Hammer," Lead Belly explained, "Every time the men say 'haah,' the hammer falls. The hammer rings, and we swing, and we sing." The "haah" sound can be heard in the work chants sung by Southern railroad section workers, "gandy dancers," where it was used to coordinate the crews as they laid and maintained the tracks before modern machinery was available.

Alan Lomax wrote that Leadbelly was one of the" greatest folk song artists" he and his father ever came across.
"Leadbelly called himself 'de king of de twelve-string guitar players ob de world.' He wasn't modest, but he was right. From him we got our richest store of folk songs, over a hundred new songs that Leadbelly had heard since his childhood in Morningsport, Louisiana, and had varied to fit his own singing and playing style."

Tragically, Leadbelly died in 1949 before he could become a commercial success, although his WNYC theme song, Good Night Irene, was a huge hit as released by the Weavers a year later. Still, Leadbelly's legacy is matched by few. He helped to keep alive scores of ballads that might otherwise have vanished while also bringing folk music and blues to a wider audience.

Alan Lomax went on to travel the world as a folklorist, musicologist, writer and producer. In 1983 he founded the non-profit Association for Cultural Equity, "to explore and preserve the world's expressive traditions with humanistic commitment and scientific engagement." Lomax was concerned that mass communications and centralized education systems were blotting out local cultural expressions and languages. He argued that folklorists and anthropologists could not stand by while these voices and ways of living were marginalized and overrun by standardization and the powerful entertainment industry. 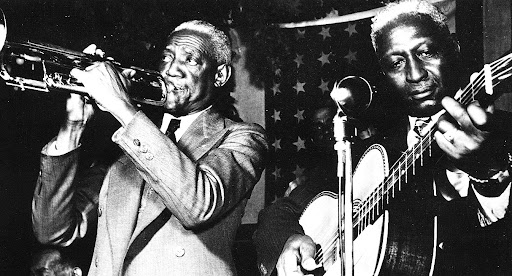 
Lead Belly was a man whose life, like that of any other man, had its ups and downs. Good or bad, Lead Belly told the world about those things through his songs. Lead Belly’s fame and success continued to increase until he fell ill while on a European Tour. Tests revealed that he suffered from amyotrophic lateral sclerosis (Lou Gehrig’s disease) in 1949. This disease destroyed all the muscles in his body giving him little opportunity to fully play the guitar without pain. He died on December 6,1949 and never got to fully enjoy the fruits of his music. In which Lead Belly's song catalog is consisted of well over 500 songs. The most famous were Midnight Special, Cotton Fields, Boll Weevil, Kisses Sweeter than Wine, Rock Island Line, and many, many more. After Lead Belly’s death, the Weavers, a folk quartet sent “Good Night, Irene” to #1 on the charts, which became the most famous song in his repertoire. That song sold a million copies and was recorded also six months later by Pete Seeger. His music still has a great influence on some of the greatest artists both black and white. Artists like The Beetles, The Rolling Stones, Eric Clapton, Little Richard,have all expressed their early studies of music to Lead Belly's records.

By 1948, he was starting to feel the early effects of the disease that would take his life.  He began a tour of Europe in May of 1949 but numbness in his legs and right hand persisted.  He was diagnosed with amyotrophic lateral sclerosis (ALS) – Lou Gehrig’s disease.  He died just over six months later, on December 6, and was buried in the Shiloh Baptist Church Cemetery eight miles west of Blanchard, Louisiana, near Shreveport. Six months after his death, Seeger and his group, The Weavers, took Leadbelly’s Goodnight Irene to the number 1 position on the pop charts.  Frank Sinatra, Ernest Tubb and Red Foley each recorded covers of the song.  The Lonnie Donegan Skiffle Group reached the Top 10 in both the U.S. and in England with The Rock Island Line.  Johnny Cash had a Top 40 country
hit with it in 1970.  Johnny Rivers had a number 20 Billboard Hot 100 hit of Midnight Special in 1965 and Creedence Clearwater Revival also recorded it.  Jimmie Rodgers had a number 3 hit in 1957 with Kisses Sweeter than Wine, a song that Leadbelly had adapted from the Irish folksong Drimmer’s Cow.  The Highwaymen, riding the crest of the folk music craze of the early 1960’s, had a number 13 hit with Leadbelly’s Cotton Fields in 1962.  In New Orleans, however, was the biggest hit of any of his songs by another artist.  The Animals changed the name to House of the Rising Sun and it became a number 1 hit for three weeks in 1964 and earned the British group a gold record.  Their version is still played regularly on radio stations today, more than 40 years after it was recorded.

Leadbelly had three of his songs designated among the Rock & Roll Hall of Fame’s 500 Songs that Shaped Rock & roll – the Animals’ House of the Rising Sun, Lonnie Donegan’s The Rock Island Line, and his own version of The Midnight Special.

Kurt Cobain covered Where Did You Sleep Last Night in 1993 to close Nirvana’s MTV Unplugged special and The Rolling Stones adapted The Bourgeois Blues for their song When the Whip Comes Down.  Others who have covered Leadbelly songs include the Grateful Dead, Gene Autry, Led Zeppelin, Jerry Garcia, and Rod Stewart.  Bob Dylan, Pearl Jam, and Van Morrison mention Leadbelly in songs and Pete Seeger wrote a song about him.  Leadbelly was inducted into the Rock & roll Hall of Fame in 1988.

In 2008, Huddie "Lead Belly" Ledbetter was posthomously inducted into The Louisian Music Hall Of Fame. Today Lead Belly is remembered not only as a musical giant but a legend in his own right throughout the world. He is remembered as the “King of the 12-String Guitar.” Many of his songs can be found in the Library of Congress, where generations to come can listen and enjoy them.