Hofbauer has been an integral member of Boston’s jazz scene as a musician, bandleader, organizer and educator for the past fifteen years, where he has performed and recorded alongside such notable collaborators as Han Bennink, Roy Campbell, Jr., John Tchicai, Garrison Fewell, Cecil McBee, Steve Swell and Matt Wilson.

Hofbauer is perhaps best known for his solo guitar work featured in a trilogy of solo guitar recordings (American Vanity, American Fear and American Grace). Of the trilogy, Andrew Gilbert of The Boston Globe writes, “No other guitarist in jazz has developed a solo approach as rigorous, evocative, and thoughtful as Hofbauer”. 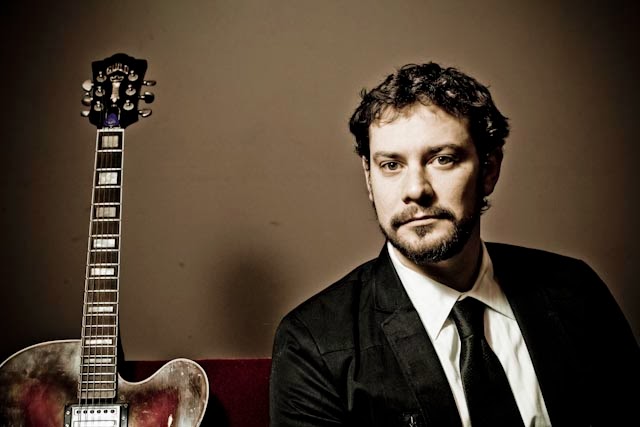 Hofbauer has also earned critical acclaim for his work in a variety of musical projects, including recordings with the Garrison Fewell/Eric Hofbauer Duo, Garrison Fewell’s Variable Density Sound Orchestra, The Pablo Ablanedo Octet(o) and The Blueprint Project with Han Bennink. In 2007, he founded his own group, Eric Hofbauer & The Infrared Band, which released its debut Myth Understanding (CNM 011) 2008 and followed up with LEVEL (CNM 020) in 2011. Most recently, he has been performing with BOLT, an electro-acoustic improvising quartet featuring the notable Dutch free jazz saxophonist, Jorrit Dijkstra, and the new Eric Hofbauer Quintet, a modern jazz project featuring Hofbauer compositions.

Hofbauer teaches jazz composition, guitar, and jazz history at Emerson College and the University of Rhode Island. In 2009, he was honored with the Massachusetts Cultural Council Artist Fellowship in Music Composition.

It was a cheap Strat. knock off. Bright red, really twangy, but I bought it with my own money that I saved up, so I treasured it.

Music is my meditation, and my communion with others and with the universe. It can be a peaceful salve to treat the wounds of the day to day grind. In solitude it is therapy, it centers me, it allows my thoughts to quiet and my emotions to flow, I can get rid of the negative and focus on the positive in my practice. In performance it is the great communicator, the conduit of joy and expression. My wonderful way to connect and to feel connected to my fellow human kind and to celebrate our collective existence. Without music, I would be lost, angry and most of all lonely.

I was already playing the sax, but I had always wanted to play the guitar since I was a little boy. I don't think it was a decision, it was some type of calling, an instinct perhaps. My body, mind and spirit, just knew that was the instrument for me. I didn't start playing guitar until I was 16, but once I began, it was a lifelong love affair.

I am most proud of my solo guitar trilogy (American Vanity, American Fear, and American Grace). It is some of my most intimate and personal playing... that type of meditative stuff reserved for the solitude of practice, that I was blessed to share with the world through 3 recordings. The triology is part auto-biography, part modern mythology, part social commentary... it is the type of work inspired by the legacy of my musical heroes, something that could be both honest and personal yet have a universal quality, all the while not being too overly serious, self-conscious or intellectually obtuse. It was a decade long project where each composition or deconstruction of a cover song was very carefully considered. My humble hope is that the listener can connect with the narrative in their own way through its exploration of the jazz tradition, the avant garde, and improvisation in the post-9/11 world.

Technique is a tool and a tool is at the service of the craft or craftsman. Too often in this age of conservatory jazz education, technique is held in too high regard as a sign of skill or creativity. Is a great chef so great just because of the knives they use? The best tools do help, yes, but they are not the craft themselves. Just because some cook has the most expensive, sharpest knife doesn't mean he or she can cook me a world class meal. Just because a player can rip altered scales in 8th notes at over 300 beats per minute doesn't guarantee a moving, impressive or even a barely listenable solo. Tools are crucial and important but there needs to be more than tool to make a craftsman an artist.

Miles Davis' solo on Oleo from Bag's Groove record. Yes I can still play most of it, I usually have my students transcribe and learn parts of it too, so it has kept it under my fingers for the last couple decades.

Their use of space and their depth of understanding that music is a language and it works best as conversation not monologues.

...eclectic, exciting, full of potential... yet still overly compartmentalize, cliquey, and at times even fearful of risk or individuality.

The sound is at once gritty, and sophisticated, percussive snaps and growls meet warm swing at the cross roads of polytonality. Imagine a  story told by Mark Twain about Eric Dolphy, Louis Armstrong, Charles Ives and Son House on a cross country road trip to attend a dinner party thrown by Jimi Hendrix and Charles Mingus. Somewhere in that tall tale is the sound I desire.

I do not use pedals or any electronic effects, that just happens to be the timbral palette I hear and personally prefer. I play an arch top guitar (1975 Guild Artist Award), since it is really an acoustic instrument I choose to delve into what it can do as just and acoustic instrument. There is actually a lot to work with. Much of it is very subtle and nuanced, not very loud but the extended technique vocabulary is very expressive on an acoustic guitar. I use it as mood or texture change, as an element of surprise or for dramatic effect. There is potential for a deeper range of emotional expression by incorporating extended technique on the guitar. Every strange snap, twang, harmonic, scrape, bent string, tap, slap, knock or combination of few of these at once is a guitar's unique equivalent to the scoops , growls, screams and skronks of horn players.

I don't have a specific artist in mind but I do have two dream projects. I would love to collaborate with a choreographer and a modern dance company where the intersection of tradition and improvisation in both disciplines can co-mingle as a dialogue between movement and music. The other is a modern update on the old organ trio of the post-bop soul jazz era. My dream trio would have guitar, organ and electronics, and a turntablist instead of drums. My dream turntablist would be Kid Koala.

The best players never stop learning, they never stay in a comfort zone, they always take risks, and always play for the sake of the music and the love of it. What we do is not about prestige, money, press etc. it is about love, passion, integrity and individuality, if those other things come along with it, fine... if they don't, it should be just as fine and the music is just as, if not even more, important to continue to make.

I have a quintet of guitar, clarinet, trumpet, cello and drums. We play a program I call "Prehistoric Jazz" in which I have written modern jazz arrangements of Stravinsky's "Rite of Spring" and Messiaen's "Quartet For the End of Time" for improvising quintet. We deconstruct these 20th century masterpieces of modern classical music, maintaining their spirit, drive, rhythms and strong melodic arcs yet we make room for dialogue, individuality and plenty of improvisation in a myriad of stylistic dialects, including swing, bop, free jazz vocabularies. You can check it out in more detail and see some video footage of our "Rite of Spring" performances here.

On Feb. 7, 2014 the Eric Hofbauer Quintet performed as part of Matt Samolis’ Church of the Advent Library Concert Series. Matt’s single camera shot frames the band nicely in the confines of the brick lined library stage. The sound quality is good and the full house gave us some wonderful energy to work with. These videos capture the band in command of this demanding material in such a way that the written material and improvisations blur into a fully realized expression of individuality and dialogue. Its my favorite footage of us to date. Recorded at the Church of the Advent Library Concert Series, 7 February 2014.
Quintet arrangement of The Rite of Spring,

People I Like – The Blueprint Project With Han Bennink