David Stackenäs was born in 1974 in Stockholm, Sweden. After finishing his studies at the Royal Academy of Music in Stockholm he has grown to become one of the mainstays of improvised and creative music in Sweden.


Stackenäs works in the field of contemporary jazz and free improvised music. Over the years he has developped a unique way of playing guitar - both prepared with different materials as well as conventional technique and a growing armada of pedals. With a wide range of sounds and techniques he creates music with great imagination and poetry. As a soloist he mainly focuses on acoustic guitars, using a lot of the organic sound-possibillities and timbres the instrument has to offer.

Has toured as soloist and with many different groups in Europe, the US, Japan and the Middle East. In 2000 David released critics´ acclaimed cd the guitar on swedish label Häpna and has since then released bow on Kning-Disk (2006) and Separator on Found You Recordings (2009). Also plays with LabField (w/ Ingar Zach), SEVAL, Les Sons Du Nuage, Lina Nyberg Band and the New Songs (w/ Sofia Jernberg a.o) and has participated as musician and made music for many different theatre- and dancepieces. Since 2000 he has participated on 35 albums.

“Creating something different -- not to mention memorable -- with the world's most popular instrument, the guitar, often seems as unlikely as winning the national lottery. Yet young Swedish guitarist David Stackenäs has done so on this short, cunningly enigmatic disc.”
Ken Waxman, Jazz Weekly on the solo-album "the guitar"

"...Stackenäs, whose acoustic guitar solo...was a personal highlight of FOTC 2004. Sounding a bit like a detuned John Russell, Stackenäs evokes the strange lute and harp music of Ethiopia, Kenya or Mauritania, sustaining pace and inspiration throughout..." JMVS - Paris Transatlantic

"The large number of expressions he creates have in common that they seem true and well-reflected. Stackenäs is present in his material, either .... kindly with feedback tradition or creating sound and rythm that goes beyond common ground of the guitar...[Stackenäs] combines the playful and the sofisticated."
-Arild R Anderssen, Aftenposten, Norway 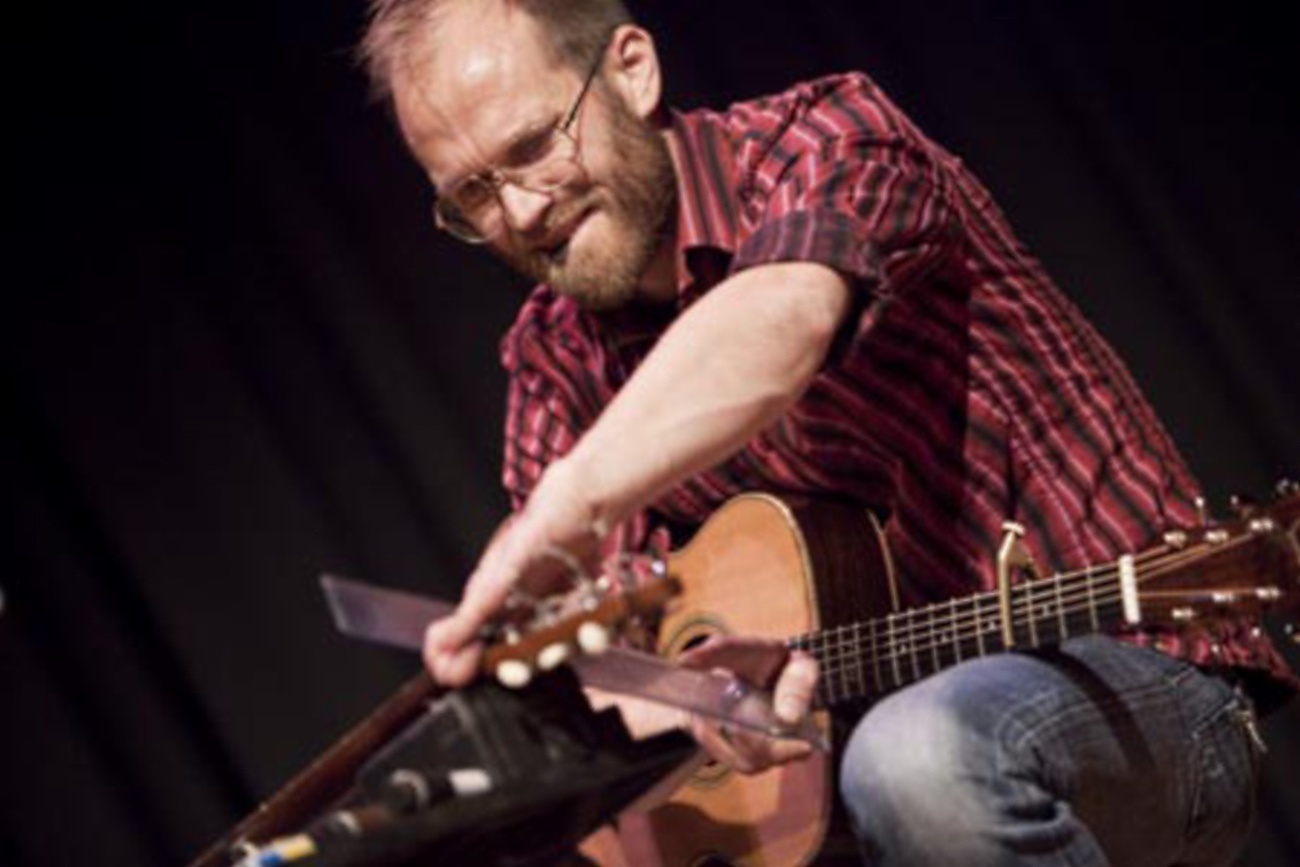 I started using other ways of playing than the conventional, because of hearing things, that wasn’t guitar-music, that I wanted to be able to do. I wanted to take the music I heard and adapt it to my instrument. Also I was influenced by other improvisers. Over the years, some techniques have stayed with me and others I threw out. The guitar is probably the western-worlds most common instrument and since I knew I wouldn’t be a conventional virtuoso I wanted to find other ways to express myself, that was more connected to my lust, creativity and personality.

I’ve always been fascinated by all kinds of sound. A cliché to say, but it’s true. It all started with curiosity and an urge/joy to make sound. It was all very playful. This urge came pretty late for me. I already knew a lot of other music-styles when I was put onto improvised and experimental music.

with Martin Küchen and David Stackenäs.

The way I use sound when I improvise (choosing to call it ”extended" techniques or not) has changed over the years and now, the only technique I would call extended is when I use a modified drum-stick that I mounted a long guitar-fret on -using it as a bridge that I can move. In that way I can play on the strings on both sides. And in that way I can also use multiple e-bows, creating long chords and/or noise.

Sometimes I think interesting things happen if you hear something and mis-understand how it’s done or hear it ”wrong”. I try it out and find it sounding great but when I go back listening to the source again I realize I got it all wrong but still found something interesting.


What do you remember from your first guitar?

In my closest family there were no practicing musicians, but my mom had bought a guitar and a violin that was hanging on the wall. The guitar was a simple nylon-stringed one. I don’t know what happened to it, if it was sold or given away, but that’s the one I started playing on. I must have been 9 or 10. I remember learning the chords of Tom Dooley on that one, as one of the first things. The violin is still in the family…but no-one plays it.

Hard question…Some of the guitars I’ve used for many years I’ve developed a deeper relation with. But why I started to play guitar probably had other reasons than musical. Firstly, because what I wrote above, that it was already hanging there on the wall and secondly it was the rock n’ roll posing that appealed to me. I love practicing, spending time with the instrument. I don’t love the guitar as an object or an idea, some guitars are terrible… But I guess I love that dream I have of a guitar with a SOUND that I imagine. Sometimes I’m closer to it with the instruments I have and sometimes I try out guitars that have a few notes with that quality. I love the fact that a lot of guitars sound better as they get older, that the old, good ones sound more ”wood”. It makes me feel better about getting older myself, maybe :)

I think it is the duo with Mats Gustafsson ”BLUES”, on Atavistic. It has a special kind of interplay and I’m really happy about the mixing/mastering by Guy Picciotto. I think we had a great day in the studio and both pushed each other to go to musical places we hadn’t been before.

I don’t know…Guitars don’t really give me pleasure, though being the lovers instrument, haha… They happen to be my tool to make music, and music gives me many things: pleasure, pain, beauty, disgust… But I do like to play it, and how it feels to play a great instrument that SPEAKS to me - and how that resonates in my limbs. Yeah, that’s what gives me pleasure!

Tell me something you love in music and why?


silence - it makes sense to the noise

It depends. One of the guitars I use mostly for improvising, with preparations and objects, is quite impossible to tune properly. It’s a parlor Levin from 1929 and two of the frets are not placed right. But, it has a sound that I never found in another guitar. And it also responds in a way that properly built guitars can’t do. The top seems to vibrate more since it’s not so solid. So, for me that’s a fantastic guitar. But if I play tunes or music relating to pitch I like to use a guitar that can be (and stays) tuned, don’t buzz has a big and projecting sound. I also prefer acoustic guitars with a smaller body, that aren’t too boomy.

Very diverse. I’m trying to check out what’s going on. Sometimes it seems too much like gear-nerd music (yes, I might be considered one myself) where the technical stuff comes before the music. But I’m also influenced by the sounds and interested in having acoustic instruments sound like electronic music. And I couldn’t really make an attempt to define a digital scene, since there are SO many sub-genres, everything from commercial music, techno to noise to minimalism, EAM and improvised music.

On the acoustic guitar it’s an amplified sound that sounds acoustic and is not too sensitive to feed-back and can be played with other instruments surrounding me, without going into my microphone so much. It’s a sound just like the acoustic one, but bigger. Maybe a contact/piezo(I hate piezos)/magnetic mic that sounds great also in the higher register. And the speaker has the same non-directional quality as acoustic sound, not like most speakers. Natural. Sometimes I find that sound…but it depends on factors like sound-engineer, acoustics in the room, speaker placement, sound-check time… I’m always working on this, and will always do. Trying different microphones and monitors…but it’s also an economic issue, of course.

How Do You Become a Musician?

You become a musician by working a lot with your friends and with whatever musical tools you use. And by listening to lots and lots of music. And by being stubborn, knowing inside that even if I think that last nights playing at a show was bad, I learnt something from that and can take it with me. So, learning by making lots of mistakes is important. Becoming a musician is also to trust that it will work out in the end - even though the calendar looks empty ahead. Keep yourself busy by creating your own jobs. Make those phone calls… The usual entrepreneur routine… But I also do believe that the stubbornness goes for believing in that even though I’m not one of those gifted ones that don’t have to fight to get anywhere, I can create something beautiful or important. The ones who work hard will succeed! Some great musicians I played with are autodidact and other are trained for many years in schools. So, whatever path we choose can be a good one…

Right now i’m curious of greek composer Marianthi Papalexandri-Alexandri, who has made some beautiful sound-installations.
http://www.marianthi.net/marianthi.html

It’s a quartet with Kim Myhr (guitar), Tony Buck (drums, the Necks) and Joe Williamson (double-bass) called Circadia. A classic ”rock” setting, but sounding very much like something else. Me and Kim have collaborated a lot since 3-4 years and we wanted to try something like this -with a drummer like Tony that can rock the drum-kit and still play so that the acoustic guitars are heard. And Joe fits just perfectly in that group having played for many years with Tony. We are trying to find time to work together which is not so easy with everybody busy and spread out in Berlin, Oslo and Stockholm, but we will record and do more shows with this band! 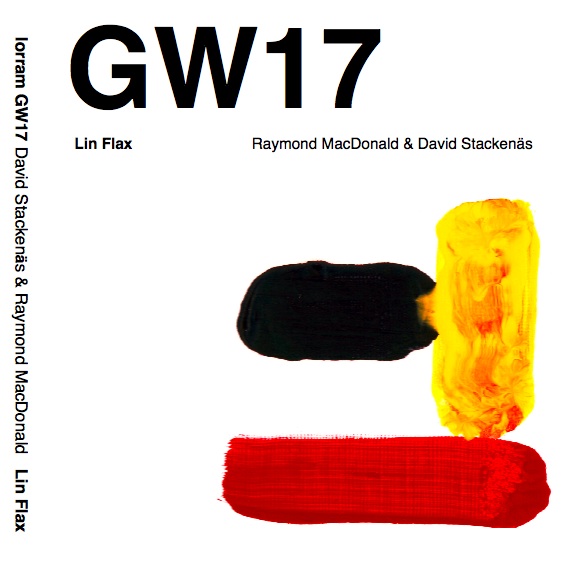