ER. Can you explain how Sun Boxes [SB] works?

Craig Colorusso [CC]. It’s much simpler than it seems. Inside each box is a PC board with a sampler on it. On the sampler is a pre-recorded guitar note programmed to play continuously as long as there’s enough sun. Each Box has a different guitar note. Collectively the notes make a Bb6 Chord.

ER. Where did the idea come from? What are some of its influences?

CC. The short answer is in 2008 my longtime friend “Sexy” David Sanchez Burr called me up and said, “YO! Make something solar we’re going to the desert.” Then he hung up. He’s the kind of guy that when he calls, you take the call. So I thought about it for a few weeks and then in June of 2009 Dave and I went out to Ryhiolite Nevada with Richard Vosseller and we did “Off the Grid,” a residency at The Goldwell Open Air Museum. The objective was to make art using sustainable energy. Sun Boxes was my contribution.

Although I would cite Dave as a major catalyst for SB, the truth is it’s an idea that’s been brewing for a while. In the 90′s I was in a few different bands that had the opportunity of touring. I had a great time and loved the idea of being on stage but at some point I wanted to make something that people could feel like they were part of. At this time I was also becoming more interested in visual art. Combining the two seemed inevitable.

Sun Boxes is an experimentation with sound and solar energy. 20 Sun boxes constructed with wood and equipped with solar panels, speakers, amplifiers and electronic sound modules. Each box emits a singular sound at a specific interval, the sound composition is generated when the sun rises and ends when the sun falls. Using solar power allows the composition to vary infinitely depending on the clouds, the amount of sun, and the shadows of the spectator. By Craig Colorusso.

SUN BOXES NINE VIDEOS
Sun Boxes are an environment to enter and exit at will. It’s comprised of twenty speakers operating independently, each powered by the sun via solar panels. There is a different loop set to play a guitar note in each box continuously. These guitar notes collectively make a Bb chord. Because the loops are different in length, once the piece begins they continually overlap and the piece slowly evolves over time.

The sounds of Sun Boxes have been described as both soothing and energizing. A unique combination of adjectives often used to describe yoga, or meditation. When experiencing the piece, Sun Boxes allows the participant to slow down, and notice the subtleties of the composition unfold. With the abundance of technology and hustle of this culture it is a much needed concept to not only be allowed, but also encouraged to slow down.

Craig Colorusso's art explores the interface of sound, light, and space. Art Center Sarasota will be exhibiting his "CUBEMUSIC" installation from Thursday, Nov. 7 through Jan. 3. The piece consists of six, four-foot metal cubes pulsing with light and music. Geometric cut-outs perforate each cube’s surface; constantly shifting light shines through these openings, creating a dance of light on the walls. The speakers of Colorusso’s solar-powered “Sun Boxes” will also create sonic tapestries all around the town. His first "Sun Box" installation happens Monday, Nov. 4, from 4-6 p.m., at the rooftop of the Palm Avenue Parking Garage. We asked the artist to share the thinking behind his work. 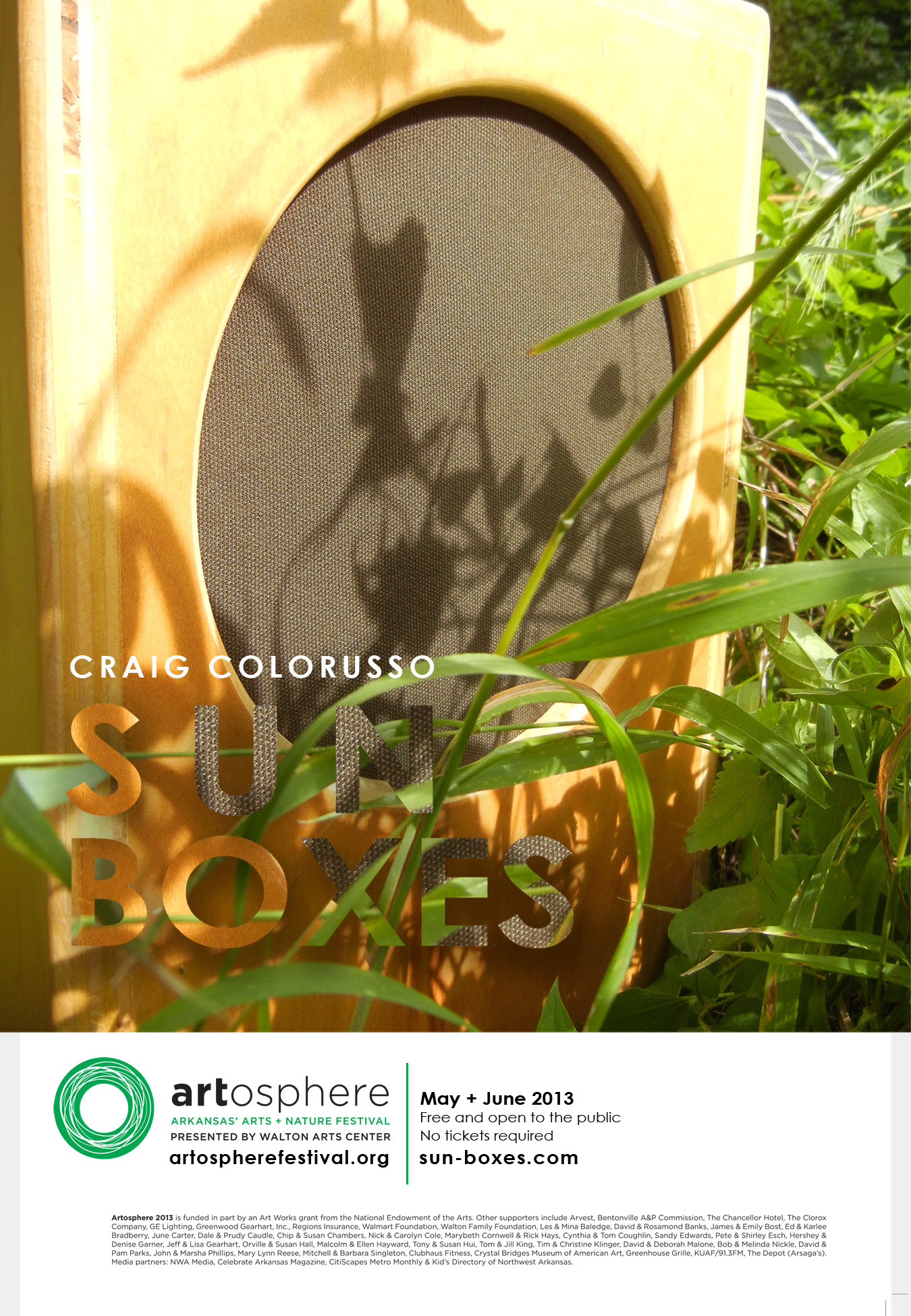 ...tell us a little about CUBEMUSIC.
Basically, it's six, four-foot by four-foot, aluminum cubes that have geometric shapes cut out of them. Each cube has three light sources inside that glow and decay at different intervals so it casts shadows on the whole space. There's also a four-note guitar chord that drones, so the whole space resonates with really low notes that pull you in. I'd describe it as an environment that a person could walk into and walk out of. I like to say these things are like chill-out rooms at raves, minus the raves.

There’s something fitting about the fact that the release party for Boston sound artist Craig Colorusso’s musical invention, called Sun Boxes, will take place not in a darkened club or a gallery space, but in a cheery Brooklyn housewares shop on a Saturday afternoon (more information here).
Colorusso’s lived most of his life in New England, but he’s spent time in Brooklyn as well. And the daytime scheduling, along with the shop’s big skylights, make sense since his musical invention is a "solar-powered sound installation,” according to Colorusso's website.

Sun Boxes emit a single guitar note in a contiunuous loop when light hits them; the level of heat, and the angle and breadth of exposure (as well as other atmospheric conditions), determine the character of the output, along with the different programming for notes and duration for each box.
Spread 20 or 25 of them around an area, as Colorusso does for his installations, and you get a subtly shifting overtone overdose, as changeable as the weather.


Part of managing a big system is knowing how you want it to sound. When Colorusso initially conceived Sun Boxes for an installation in Las Vegas in June 2009, he first had to figure out what the boxes would do, and what it was all going to sound like.
“I thought, ‘What would it be like to have 20 Fender Champs in the desert playing this chord?’ Fender Champs are my favorite amps. The idea of 20 of them out there was very appealing. And the whole thing really started in a bizarre way. My good friend, Sexy David Sanchez, called me up one day, and he said, ‘We're going to the desert,’ and then just hung up. He's the kind of guy who, when he calls, you take the phone call.”

Videoplace - A collaboration between Craig Colorusso and David Sanchez Burr. The video represents only a portion of the whole installation which can be viewed at desert-automation.com. Videoplace is an interactive video and sound installation and was exhibited at various spaces.

INSTALL the film enters the world of installation artist Craig Colorusso who is transforming our environment through sculpture, light and sound. A series of audio interviews with the artist accompany a wide breadth of footage that traverses the New England landscape to capture three installations: MB 89, CUBEMUSIC, and SUN BOXES. Colorusso candidly recalls the salient moments that have helped shape both the world he is creating and the life he is living.

Craig Colorusso was born April 18th, 1970 in Mount Vernon, NY. With a guitar and some inspiration from the Punk Rock movement of the 1980’s he began to write his own music. By the 1990’s he was in touring bands and started his own record company. After touring the United States tirelessly Colorusso found himself in one too many bars. His music began to expand and incorporate composition and improvisation. He began to play bass clarinet and clarinet. This expansion caused his music to evolve, resulting in the pieces Tagmusik (24 hour performance in Bethel CT) and Maschine (a composition for instruments and off-set printing presses.) Slowly, these explorations extended beyond music and investigated light and sculpture. First with MB 89 and then with CUBEMUSIC, both of which have toured the US. In the last decade Colorusso has combined his interests to create his latest work Sun Boxes which premiered June 2009 as part of the exhibition “off the Grid” at the Goldwell Museum in Rhyolite Nevada.

I have always been fascinated by the way light and sound alter the way we perceive time and space. We organize all experiences in these terms. The motivation behind my musical compositions and installations over the past several years has been the exploration of the conventions that determine the way we experience time and space, and thereby our world. Through my work I’ve come to appreciate light as much as sound. Most of my pieces explore this connection. Theses pieces seek to expose such conventions by giving the listener the chance to become familiar with unfamiliar tonalities and rhythms, as well as to register the divorce of space and sound made possible by contemporary audio technology. And they sound and look good.
http://www.craigcolorusso.com/
http://www.sun-boxes.com/